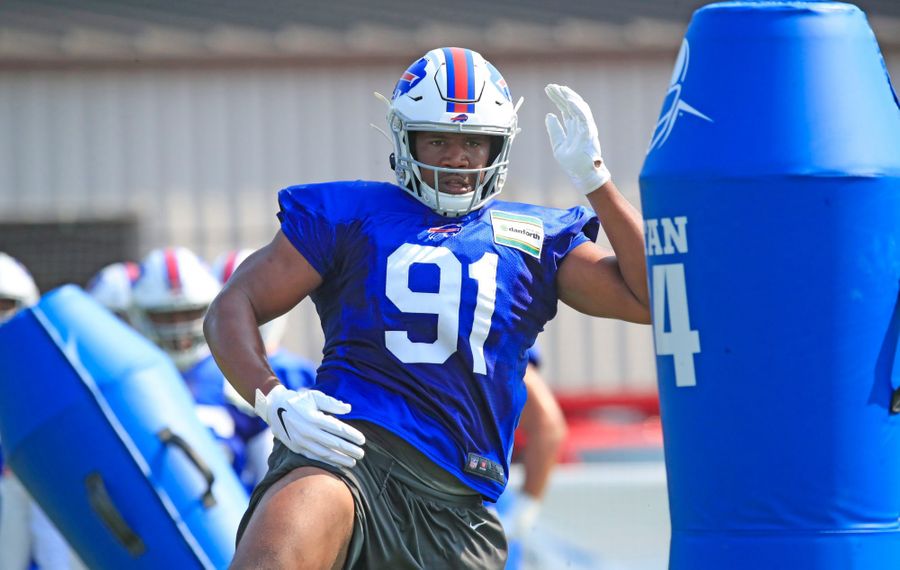 PITTSFORD – The milestones will arrive often for Ed Oliver in the next couple of months.

On Thursday, it was his first training-camp practice as a member of the Buffalo Bills. Soon, it will be his first padded practice, then his first preseason game, and finally the regular-season and home openers.

Oliver, though, said he approached Thursday’s practice the same way he did organized team activities in the spring or his college training camps at Houston.

“Football's football. However you dissect it, look at it, guys are out here getting better,” said Oliver, selected ninth overall in the NFL Draft. “When you start looking at it differently is when you start getting different results. I want to keep the same success rate, so I look at it the same way.”

Before practice started, coach Sean McDermott was blunt in assessing the transition Oliver needs to make from the spring to summer.

“He's a rookie, you know, and this is his real first day of practice, like real practice,” the coach said. “It's a journey, so it'll take some time. He'll have to go through, really, everything that the rookies go through in terms of getting themselves acclimated to the NFL. There's a gap between major college football and the NFL, so he's got a long way to go right now.”

That was on display once practice started. Oliver lined up with the second-team defense, with Jordan Phillips taking the practice reps with the starters next to Star Lotulelei. The expectation is that Phillips is simply keeping the seat warm until Oliver is ready to occupy it, but for right now, there’s no timetable on when that will happen.

“Ain't nothing given to nobody, and if you don't work for it, you'll never have nothing,” Oliver said. “I know what's in front of me. I know what I have to do to be successful. Right now it's just put your head down and go to work. Every day is a chance to learn. I could be a 10-year vet, you still have something to learn. So just me coming in, I'm quiet. It's the only way I know how to try and get it right.”

That’s something Oliver had no problem doing in college. He became the first three-time All-American in program history at Houston, racking up 193 tackles, including 54 that went for losses, 13.5 sacks and six forced fumbles in 33 career games. After losing Kyle Williams to retirement following the 2018 season, the Bills were thrilled that Oliver slipped to them with the ninth overall pick.

He was one of the final players off the practice field at St. John Fisher College. His approach to the first day of training camp shouldn’t come as a surprise. Oliver’s work ethic has been played up plenty by the Bills. In the team’s media guide, Oliver’s bio includes the story of how he and his brother were enlisted by their dad to build a barn as kids.

Thursday’s practice, on a pristine grass field and under perfect weather conditions, looked easy by comparison.

“In college, I looked at it like work, and it's no different here,” Oliver said. “Come in, humble as you know how, be quiet, listen up and take in everything guys say. Older guys helping you out, take in everything to just try and fit in any way possible.”