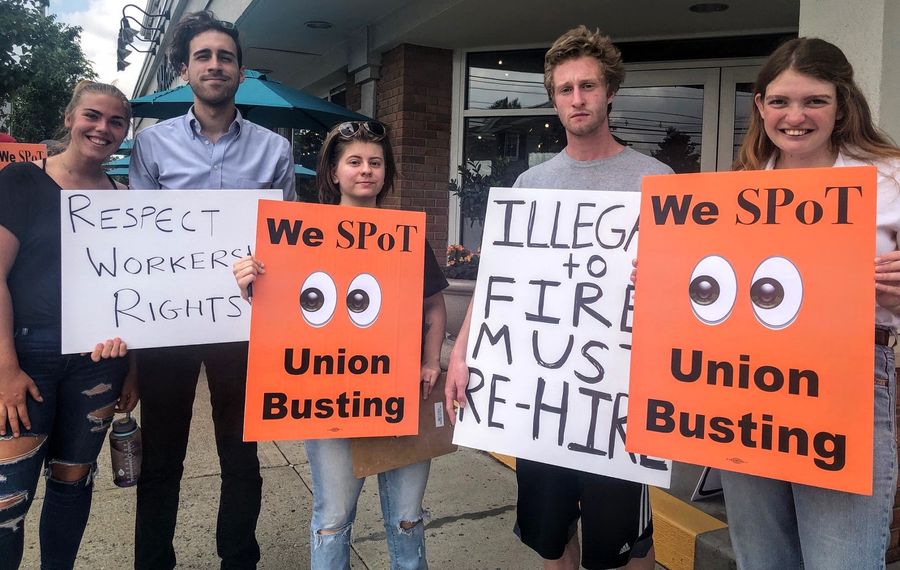 When Spot Coffee fired three longtime employees last month, the workers said the company didn't give them a reason for their termination except that the local chain wanted "to go in a different direction."

With the case now before the National Labor Relations Board, that explanation likely won't cut it – not if Spot Coffee wants to prove it didn't let workers go for trying to organize a union, said Howard Foster, a labor relations expert and professor emeritus at the University at Buffalo School of Management.

"It is certainly not legal to fire an employee for trying to organize a union," Foster said. "It's unlikely they will say they didn't want them to organize a union so they fired the ringleaders. They will have to give a legitimate reason and explain it."

Anton Ayoub, Spot's president and CEO, has maintained the employees' organizing efforts had nothing to do with their termination. In an email, he declined to comment on the proceedings, but he did say the company denies the allegations and is "fully prepared to defend its business decisions before the board."

"The three employees – two of whom were part time – were discharged for lawful business reasons," he said.

To determine whether that's true, the NLRB will assign an examiner.

"Ultimately, it's more or less a trial," Foster said.

Without being aware of all the details, Foster said he can't comment on the specifics of the case. But if the board finds Spot did not legally terminate the workers, it can order the company to reinstate them and award them back pay.

"The idea would be to make the employees whole as a result of the losses they suffered," Foster said. "That could be a long time down the road."

The board cannot assess fines, but it can require the company post a notice that the employer promises not to violate the law again.

Most cases are resolved before they get to the end of the lengthy NLRB process, he said.

Spot workers at the company's only Rochester location organized in May, represented by Workers United Rochester Regional Joint Board, which is helping Buffalo's Spot workers with their organizing efforts.

Gary Bonadonna Jr., Workers United's manager, said he has never seen any company be so blatant about illegally terminating workers for organizing as the union claims Spot Coffee was.

"In this case, it's pretty egregious," he said. "You have three people at three different locations, all fired. Two of them are fired within minutes of each other. And this very principled, beloved manager gets grilled by the company, doesn't give up names and gets fired for it."

Workers United will host a rally to support the fired workers at the Spot cafe on the corner of Delaware Avenue and Chippewa Street at 4:30 p.m. Monday. A large turnout is expected, comprised of several different locals under the WNY Area Labor Federation as well as elected officials.

At the rally, demonstrators will call for Spot to agree to a fair organizing process, reinstate the workers with back pay, admit to anti-union activity, apologize for it and swear never to do it again.

The company's actions have created a climate of fear among organizers in the workplace, Bonadonna said.

"Companies need to be held accountable for actions and behavior like this," he said. "This is an example of why new unions are not formed in this country."

The dispute comes just as Spot announced it has signed franchise agreements with Tops Markets to add Spot Express cafes to at two of its stores. The small-footprint, limited-menu cafes are planned for Tops stores on Sheridan Drive in the Town of Tonawanda and Maple Road in Amherst.

Unionized Tops employees will staff the Spot Express cafes in the grocery store.