For two decades, almost all patients brought into a Western New York emergency room after an opioid drug overdose were stabilized, given a short list of treatment clinics to call for a follow-up appointment and released.

The results were predictable. Few appointments were scheduled, and the potentially fatal cycle of drug addiction continued.

That began to change two years ago, when Dr. Joshua Lynch and the University at Buffalo went on a regionwide crusade to bring together those on the front lines of the opioid crisis.

Health care providers in 17 ERs now treat those suffering from an overdose, or in withdrawal, on a short course of medication, then provide them the chance to make a guaranteed appointment – within two days – at one 47 drug treatment clinics across the region.

The process has shown such promise that the state Department of Health announced Wednesday it will launch the Buffalo Medication Assisted Treatment and Emergency Referrals, or Buffalo MATTERS, program across New York.

“If somebody comes in with chest pain, we would never just blow them off and send them home," Lynch said. "We used to do that for patients with opioid-use disorder. I think we’ve wholeheartedly now realized in the medical community that this is a potentially life-threatening chronic disease."

During the height of the crisis in Erie County, Lynch and others decided there had to be a better way to help those with opioid-use disorder, and their loved ones, maneuver a medical and treatment system that can be daunting, judgmental and often overwhelming.

“We've tried to remove a lot of the barriers that patients have encountered in the past,” he said.

Three years ago, the opioid crisis claimed the lives of 301 people in Erie County. A year later, when Lynch and other emergency room doctors started the pilot ER treatment program, 251 people died. Last year, there were 191 confirmed deaths as more health care providers joined the effort.

Buffalo MATTERS was developed by Lynch and others in the Department of Emergency Medicine at the UB Jacobs School of Medicine and Biomedical Sciences.

Participating emergency department providers have used the program to help about 150 patients start drug-assisted treatment and book appointments before leaving the hospital.

Horizon Health Services was one of the first clinical treatment providers to sign on, recognizing the importance of making time count in hospital emergency departments, where those in a drug-fueled crisis tend to have a greater desire to seek help.

“We know that motivation can be incredibly fleeting in nature and within that realm of treatment, we were really siloed as providers,” said Elliot Zimpfer, a licensed mental health counselor and program director with Horizon Health.

The ER used to be where the bottleneck to treatment started just a few years ago.

“The real problem was within the referral process, which was pretty simple and not effective,” said Lynch, a clinical assistant professor of emergency medicine at the Jacobs School and physician with UBMD Emergency Medicine. “We would basically give the patient a list of phone numbers to call to try to get into rehab. After we really started to focus on how these patients were doing, we realized that some of the numbers on this list didn't even work and the patients were not going to call to make an appointment.”

This approach also led patients and their loved ones to believe a severe shortage of treatment beds existed in the region – even though dozens were being added to address the opiate crisis – and that an inpatient detox program at Erie County Medical Center was one of very few options, Lynch said.

Thomas Deponceau and his fiancé, Ashley Shipp, were among patients treated using the new model in early 2018, when Shipp overdosed and ended up in the emergency room at DeGraff Memorial Hospital.

Lynch, director of the emergency department in the North Tonawanda hospital, offered to start Shipp on the Buffalo MATTERS protocol. She agreed, on the condition Deponceau, who was using illegal drugs with her, be given the same opportunity.

“This wasn’t the first time I’d overdosed," Shipp said Wednesday, "and nobody at a hospital did anything for me until that day. It was really helpful getting us in so quick. It's the urgency thing. If you don't go right away, then you have the thoughts in the back of your mind saying, 'I don't want to go anymore.' "

As outpatient treatment programs grew to meet demand for the ER program, the next obstacles became regulations and competition.

Those programs also tend to use their own medical records and appointment systems, as well as treatment standards, Lynch said.

He and other program leaders encouraged a growing number of those providers to take a more collaborative approach to help save lives. 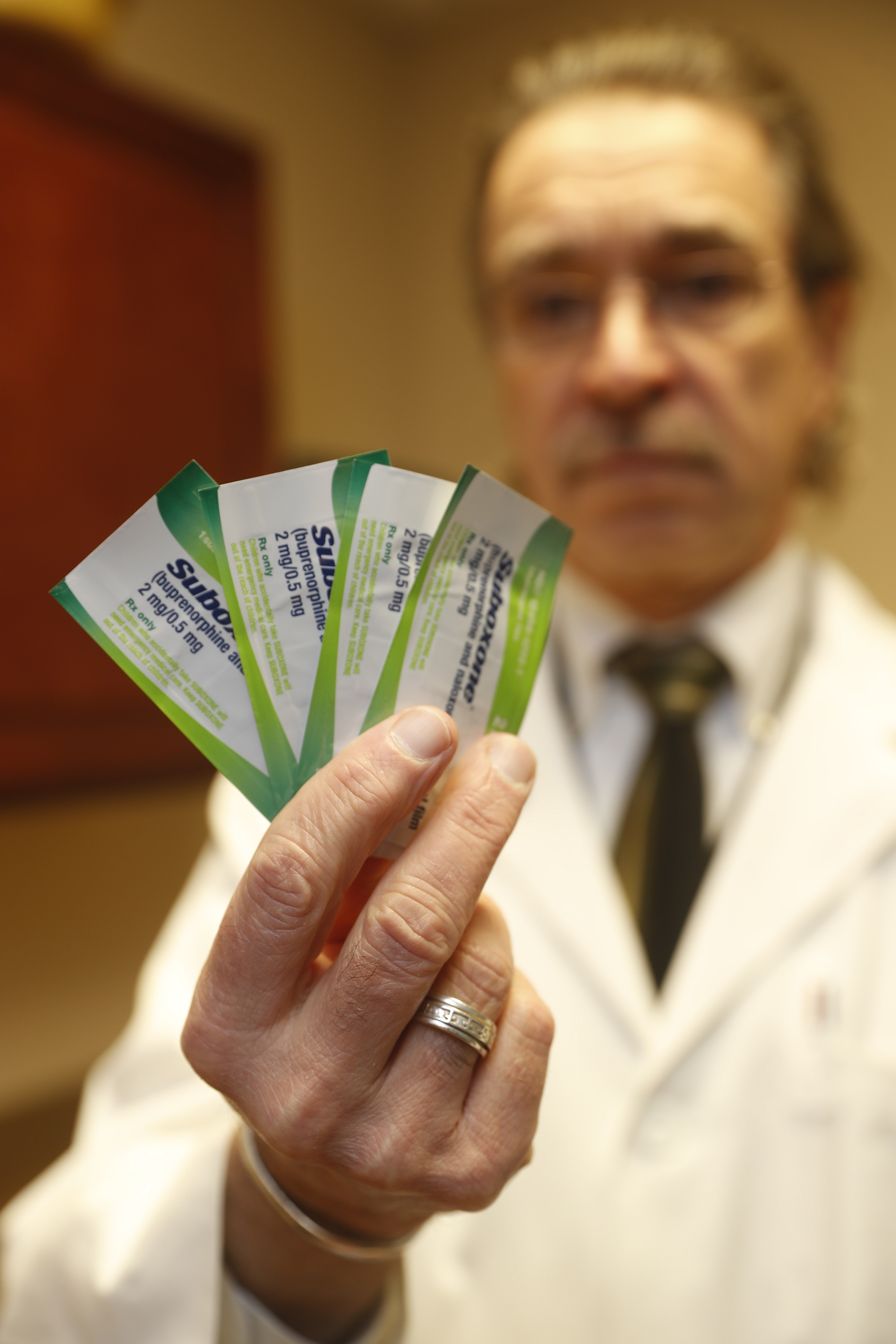 It is possible for those without an opioid-use disorder to get high on methadone and buprenorphine (also known as suboxone), but dosages provided in emergency settings and treatment clinics have a different impact on those with a high tolerance to opiates, blocking the euphoric effect while tamping down what often are debilitating withdrawal symptoms best managed over months or years. (John Hickey/News file photo)

The refrain “we just don’t do that here” became less common, Lynch said, as he and others on board were able to share research from the Yale University School of Medicine that showed those who start medication-assisted treatment in emergency rooms and are scheduled right away for treatment appointments tend to stay engaged in treatment longer and are less likely to return to opioid abuse.

Lynch and others with UBMD Emergency Medicine deserve credit for the persistence they showed in bringing the approach to a whole region, Burstein said.

There also have been other obstacles. People without health insurance or with other substance-use disorders – addictions to benzodiazepines like Xanax, for instance – also posed a challenge for  clinics with policies that denied treatment for such patients.

Lynch and his team convinced those clinics to waive such policies – and agree to provide long-term treatment – in exchange for participation in Buffalo MATTERS.

At that point, the program could offer a swift, clear and consistent path toward recovery.

“It's really important that our society understand that addiction is a brain disease; it is a chronic disease but it's a treatable disease,” said Dr. Nancy Nielsen, senior associate dean for health policy at the UB medical school.

Neilson, a former president of the American Medical Association, also was among early program advocates.

Mercy Flight handled treatment appointment scheduling at first. This month, the state Health Department set up a new online platform that participants can access on an iPad. Hospitals in Western New York already are linked, with those from Albany and New York City next to follow. Patients across the state can get a better understanding about how the program works by visiting buffalomatters.org.

“With the expansion of this model, the emergency department will be well positioned to combat the epidemic,” said Narelle Ellendon, opioid program manager with the Office of Drug User Health within the state Health Department.

Patients at participating ERs who arrive at the hospital because of an overdose or opioid withdrawal will be encouraged to sign on for treatment and, if appropriate, be prescribed a course of suboxone to last up to seven days. Those patients will provide basic information on a secure state Health Department website, including where they live and their drug and medical histories. Then a listing of appointments available during the next 48 hours will pop up on a computer screen. Generally, about 120 appointments per week are available, providing ready access to people in even the most remote parts of the region.

Another route toward help is the Erie County Addiction Hotline, 831-7007.

“We want to try to make as many options as possible for people to access care,” Burstein said, “because this is lifesaving treatment, just like treatment of any chronic disease.”

Deponceau and Shipp live in North Tonawanda and have been together for a decade. They provide an example of what is possible.

Both continue treatment after 18 months, have remained clean, and have steady jobs, he in landscaping, she as a supervisor with a retail department store chain. Shipp plans to return to school in the fall, with an aim to become a substance abuse recovery counselor.

“Most addicts, when they get high they're not happy,” Deponceau said. “They've been fighting with themselves for a while. It's just not easy."

The UB departments of emergency medicine and family medicine, and the university's Primary Care Research Institute, will spend the next several months examining how the program is working. They already know that at least half of patients seen through Buffalo MATTERS followed through with early appointments – and believe that the new program has helped reduce the number of opiate-related deaths in Erie County by about 40% during the last three years, while the growing presence of fentanyl in the illegal drug market has pushed the trajectory of fatal overdoses higher in many parts of the U.S.

“The law enforcement community, the medical community, the government, counselors, peers and first responders have all chipped in,” Lynch said, “and none of these groups can work alone. This is all of us working together and it’s partially what contributes to the reduction of death.”

After a near-death, plain talk by doctor can make a difference for those battling addiction