Chestnut Ridge Park may be the jewel of Erie County's park system, but some of its restrooms and picnic pavilions show just how tarnished parts of the park have become. Vandals targeted some of the park's structures. Neglect has also played a role. Visitors come across broken picnic tables, deteriorated shelters and rutted roadways. Multiple restrooms have shattered windows, missing stall doors and broken faucets.

Similar conditions can be found in the county's other parks, said Comptroller Stefan Mychajliw, who accused the Poloncarz administration of not spending the hundreds of thousands of dollars already in hand to fix the problems.

Erie County has borrowed more than $10 million to improve its sprawling park system over the past five years, according to a 26-page report to be released today. Mychajliw reported nearly a third of all the money borrowed between 2015 and 2018 as unspent as of the end of June.

"We actually did a deep dive into the numbers and found a significant amount of money is being wasted," he said. "From our perspective, the report shows it's mismanagement."

The county budget tracking system showed more than $3 million in borrowed cash through last year has been sitting in the bank, racking up interest and leaving many park facilities in disrepair, the comptroller said. A Buffalo News analysis of the report data showed a quarter of all the money borrowed for parks improvements during that period was neither spent nor even reserved for any purpose in the budget system.

When it comes to money designated specifically for park shelters, restrooms and roads – which park visitors are most likely to use – roughly 60% of the money borrowed has not been used, according to the News analysis. Those unspent dollars totaled $1.5 million, excluding planned improvements this year.

County Executive Mark C. Poloncarz responded that many county parks improvements are being made with borrowed cash, but he said "unacceptable" bookkeeping practices are not reflecting that work.

"I think things got a little lax downstairs," he said of the county Department of Parks, Recreation and Forestry. "What I see here is is not a lack of spending, because they’re spending the money that’s there. It’s a matter of proper bookkeeping."

Poloncarz said the actual amount that has gone unspent is much lower than what the county's bookkeeping system shows – he's just not sure how much lower.

In light of the report, Poloncarz said he will demand a full accounting "down to the dime, down to the nickel," of how much parks department money remains unspent.

For instance, he said, nearly $500,000 is being spent to rebuild shelters at Ellicott Creek Park in the Town of Tonawanda, with most of that money set aside in 2015 and 2016. But the county software system still lists that money as unallocated and unspent.

Comptroller's Office officials said that discrepancy reflects a major violation of county policy. They also questioned how supplies are being purchased or how anyone is getting paid.

"Nobody can print a check except for us," said Bryan Fiume, the comptroller's chief of staff.

Mychajliw took videos and photos of the parks he visited that show obvious signs of neglect. His report sampled eight county parks, including the county's five historic "heritage parks," and showed how that lack of investment has led to rough or deteriorated conditions, he said.

When The Buffalo News visited Orchard Park's Chestnut Ridge Park, restroom problems ranged from missing doors and fixtures, broken faucets, shattered glass block and what looked like mold. An abandoned bird's nest remained in one area where it looked like urinals were supposed to be. 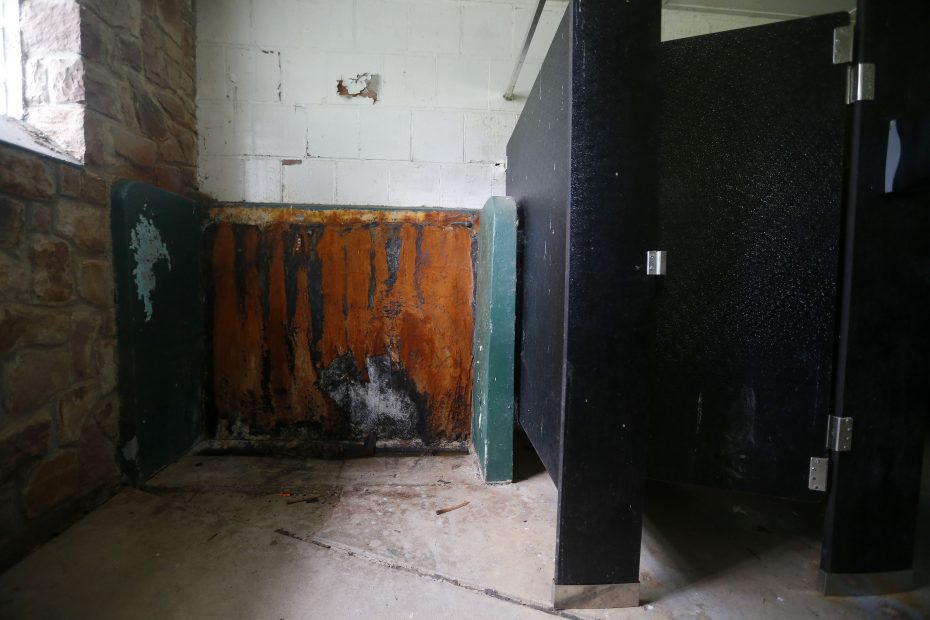 A urinal "trench" in a men’s bathroom where the smell was unbearable. (Mark Mulville/Buffalo News)

Multiple picnic pavilions included vandalized benches with broken ends, roof holes and missing bricks. A racial slur was carved onto a wood picnic table. When Comptroller's Office staff visited, the vandals highlighted the word with spray paint. When a reporter visited a few weeks later, the spray paint had been covered with brown paint to match the rest of the table, but the carved slur remained.

"That is not acceptable," Poloncarz said of the damage.

He added that he spot checks the parks and reports all signs of damage and neglect, but ultimately, parks employees need to react more quickly.

"I’m not happy because that means the staff isn’t doing the work that they should," he said.

County officials on all sides said they are seriously concerned by the failure of the parks department to properly account for major construction projects.

"We’re going to have to go through this line by line," Poloncarz said.

Poloncarz said more parks projects have been done or are being done than have been properly accounted for in the budgeting system. Aside from major improvements to Ellicott Creek Park, these projects include a new playground at Seneca Bluffs Natural Habitat Park in Buffalo and a new pedestrian overlook at Akron Falls. Both projects are complete, he said, but aren't listed as funded or completed in the county's accounting system.

Comptroller's Office staff said if the parks department is keeping a separate set of books, that's a problem and possibly illegal. Even if reconstruction work has been done by parks employees, they said, if that work wasn't charged against the correct budget, then the county's budget books are distorted.

County administrators said $14.6 million has been spent on construction-related projects in the 10,000-acre park system since Poloncarz took office, with much of that work done after years of  neglect dating back to a county budget crisis 14 years ago.

The county has also spent $500,000 to create an updated parks master plan for short- and long-term improvements at all 40 parks, golf courses and forests. Some of the repair work needed at Chestnut Ridge for stone, roof, picnic table and window replacements are listed as part of a multiyear repair program. 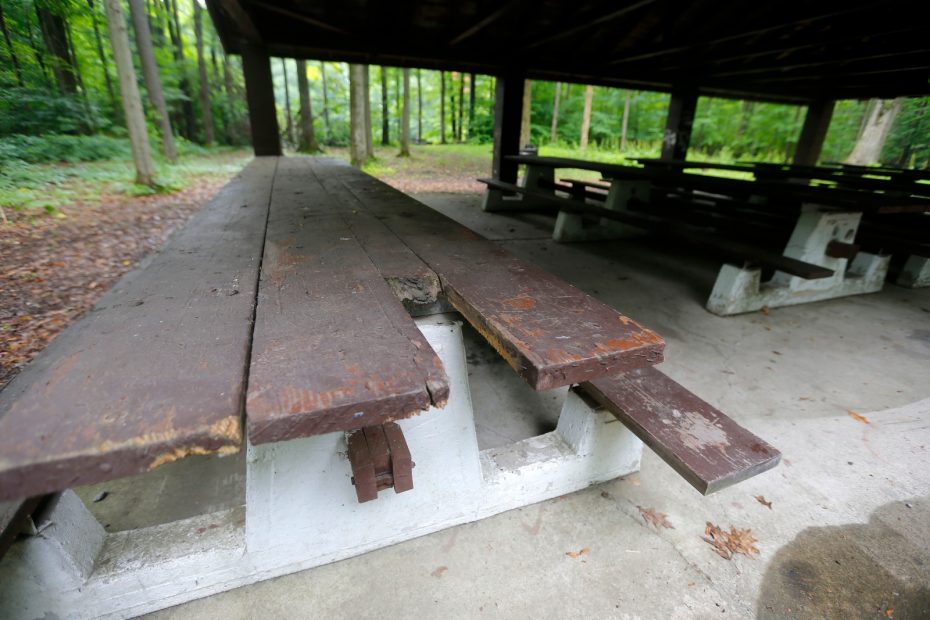 A broken board on a picnic bench in a shelter. (Mark Mulville/Buffalo News)

Many pieces of outdated, paint-peeled playground equipment, which tested positive for lead when Mychajliw used over-the-counter lead paint test kits on them, were also cited in the report as requiring replacement but listed as a "low priority." Mychajliw issued a letter of concern to the health commissioner the same day the lead testing was done.

As for park operations, the county has brought in park rangers and established a parks passport program.

"We have a park ranger program that resembles Yosemite," Mychajliw said, "but the infrastructure is falling apart."

Poloncarz cited a number of factors for repair delays. The county process for divvying up park repair work between unionized park employees and contractors is cumbersome, he said. Unseasonably wet and rainy conditions this past fall and spring also hampered work, particularly on roads.

The pond in Como Lake Park, for instance, was supposed to have been dredged last fall with $100,000 in borrowed money. Wet weather has delayed that project to this August, Poloncarz said.

He also cited vandals and staff response times as problems. He mentioned discovering vandalism at Black Rock Canal Park a month and a half ago and he told parks officials to address it. When he went back three days later, he was "apoplectic" that the extensive damage still remained.

"It drives me nuts, the kind of stuff that shouldn’t happen, but it does happen," he said. "The No. 1 goal is to ensure safety."

After The Buffalo News described the Chestnut Ridge damage, Poloncarz went there the next day and talked with the park superintendent about a plan for repairs.

He then released two videos on Twitter highlighting work that has been done at Chestnut Ridge: improving the trail and signage for the popular Eternal Flame and rebuilding a shelter and restroom. As part of one video, he mentioned "very disappointing" park vandalism and asked residents to report it.

Watch my latest #FindYourNextAdventure in an @ErieCountyParks video to learn about our new handicap accessible shelter and bathrooms at Chestnut Ridge Park and an issue we are dealing with in our parks: vandalism. Help us stop vandalism in our parks. Watch the video to learn how. pic.twitter.com/LyLKmoueLA

It's common, Poloncarz said, for borrowed money to be held for a year or two before being spent.

The Comptroller's Office, however, said the unused money borrowed since 2015 has racked up $350,000 in needless interest payments.

"The ridiculousness of that statement is we shouldn’t have borrowed the money if you didn’t have the intention to spend it," Fiume, of the Comptroller's Office, said. "There is no need to borrow money two years in advance for something you’re doing today. It literally takes us 12 hours, less than day, for us to sell our debt to Wall Street."

Poloncarz's political opponents are expected to capitalize on the comptroller's parks report in an election year – starting with the comptroller himself.

Mychajliw is using the news media and social media to bring attention to his park findings between now and the end of the month since July is National Park and Recreation Month. He will post daily videos contrasting parks videos that Poloncarz shot eight years ago when he ran against then-County Executive Chris Collins. The new videos show the park conditions have gotten worse, not better, he said.

He will also post videos of older playground equipment with peeling paint that he tested for lead. They all tested positive. In light of that finding, the Erie County Health Department began visiting all county parks this week. Inspectors will use high-tech equipment to check all play equipment and pre-1978 shelters for potential lead exposure and work with the parks department on a remediation plan.

County Legislator Lynne Dixon, the Republican-endorsed candidate running against Poloncarz this fall, will have a leg up on the issue. Fiume, the comptroller's chief of staff, also serves as Dixon's campaign manager. Fiume said he has not yet shared any details of the report with Dixon or other county legislators.

The parks department has asked for more than $3 million for the capital budget in 2020.

"I can tell you they’re going to get nowhere near those amounts in total," Poloncarz said.

He also said he looks forward to new leadership from incoming parks commissioner Troy P. Schinzel. He replaces Daniel J. Rizzo, who retired in June. Schinzel served as parks commissioner from 2012 to 2015 before taking a job in Dallas and has a proven track record, the county executive said. Schinzel begins work Monday.

"The old commissioner is returning," Poloncarz said, "and he is going to have his work cut out for him."

Mapping out a plan for Erie County's 10,000 acres of parkland