How do you get to Hawaii?

If you're a member of the Lancaster High School marching band, you wash cars, collect bottle deposits, hold meat raffles and convince your family members to lend a hand or two.

And you practice. Relentlessly.

It will take all of that and an army of volunteers to send the much-awarded band to the Aloha State to perform in the prestigious Pearl Harbor Memorial Parade on Dec. 7.

The Marching Legends, a tradition in Lancaster since the 1950s, will represent New York in the parade along Honolulu's Kalakaua Avenue to mark the 78th anniversary of the attack that thrust the United States into World War II.

The honor is not lost on the 91 members of the Marching Legends, who are spending their summer "vacation" practicing as a unit up to 10 hours a week to master the music, and the precision moves that accompany it. But in their spare time, they are trying to come up with the equivalent of $1,000 per member to make what for many of them will be a once-in-a-lifetime trip.

“Lugging cans is this season’s chaos. Last year it was getting the whole band to New Jersey,” said Brian Lubkowski, band booster. “Pearl Harbor is a relief for me. They’re flying.”

Fundraising and practice are routine every year for band members, whose season usually culminates in October with the New York State Field Band Conference in the Carrier Dome in Syracuse. But this year’s trip to Hawaii amps up activity as students and parents scramble to raise $78,000, said Melody Gil, 41. Gil, who started as a "uniform mom," and Deirdre Ardillo, 52, a member of the food crew, serve as co-presidents of the band boosters.

Boosters provide the wheels required to collect bottles and cans, the skill it takes to handcraft props and prepare food, and the uniform fixes it takes to ensure the shows go on.

The band raised $9,200 in the sponsorship car wash, where students were asked to find donors to pay 40 cents for each car wash with a 150-vehicle cap.

“It’s all about teamwork,” said drum major Sofia Brewer, 17, a senior who plans to study mechanical engineering next year at Binghamton University.

Not every high school in the area has a full-time marching band. Jamestown, Medina, Orchard Park, Lancaster and West Seneca are among the handful that compete in the state championship. In October, when Lancaster competed against 11 bands in the “Cavalcade of Bands” in Orchard Park, it outscored all schools. 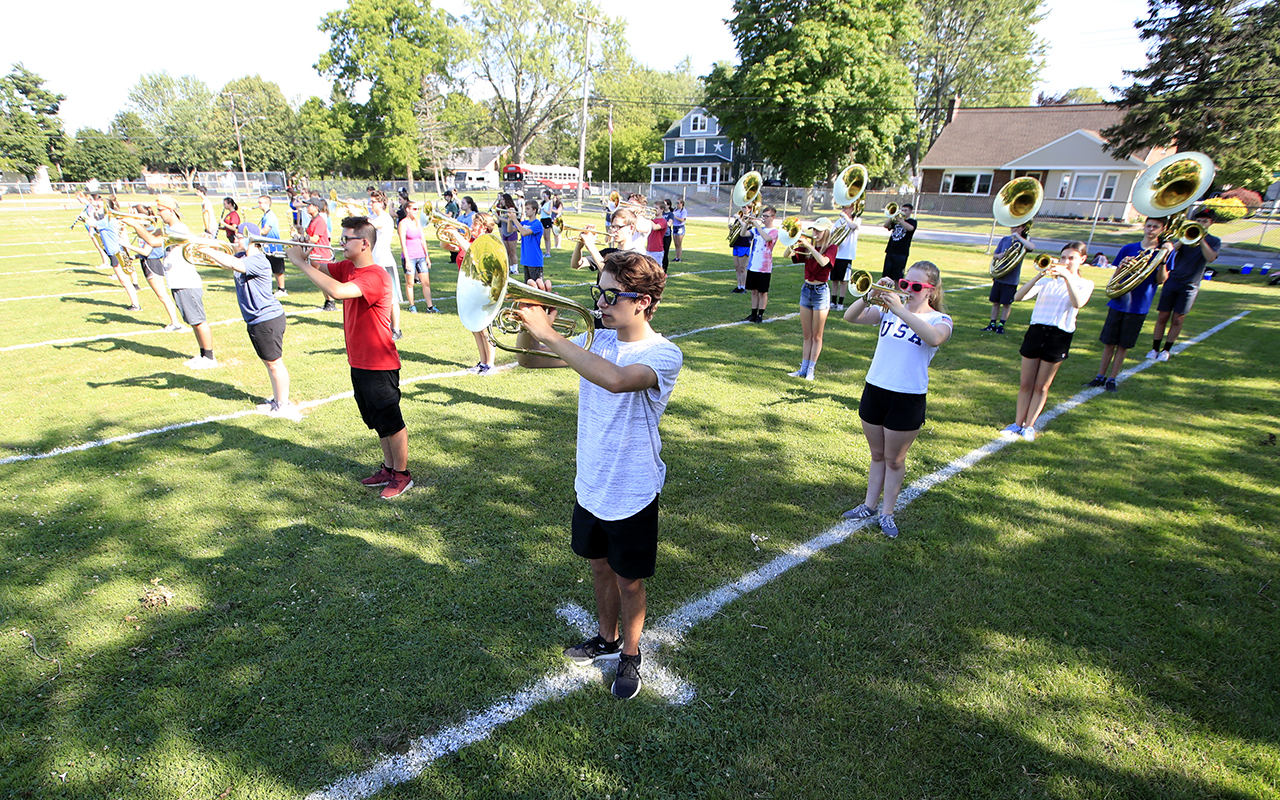 Matthew Tichy, 24, a Lancaster band graduate who was hired as a staff member now coaches the brass and woodwinds marchers.

“There are so many puzzle pieces, so many elements to a marching band, many of the field bands hire staff to help students with details,” said Tichy, a graduate student in music performance at Northwestern University.

Lubkowski is a prop-making guru, father of three and an electrician whose credentials were established two years ago when he built a 15-foot grand piano with a motorized remote control lid that raised to reveal thousand-watt strong LED lights.

“I came into this thing blind. I had zero experience with bands,” admitted Lubkowski, 37. "We’re always in the midst of building props and [instrument] carts. Last season we did a 30-foot diameter sun painted to look like the corona at an eclipse. That was a real treat.”

The theme of that field show was “Path of Totality,” and ended with the band’s performance of “Total Eclipse of the Heart,” said Richard Goss, band director.

The band’s pit section is the stationery percussion ensemble. Located front and center, it contains instruments including timpani, marimba and xylophone that are moved on carts – made by Lubkowski and other fathers.

The seven-minute field show, performed 15 times by the band during the season, requires intense focus by each of members. It requires the 22-member color guard, and the woodwind, drums and brass marchers to move in perfect synchronicity.

“The hardest thing in a seven-minute show is the ability to stay focused,” said Goss, 58. “Repetition is important, focusing part by part to learn the whole. Over time that’s what makes your group better. It’s like a living organism. You have to keep adjusting based on what the judges suggest. We are constantly adjusting." 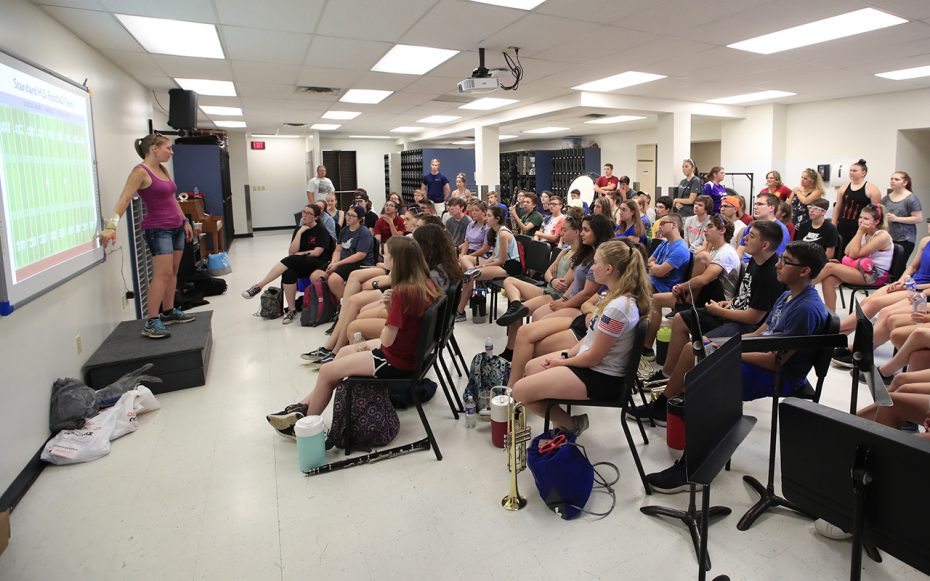 This year’s theme, “Into the Yonder Blue,” salutes the bravery of the United States’ air forces and includes an original concert band piece co-written by Goss in tribute to his father, a WWII "hump" pilot.

“I wanted to pay tribute to the greatest generation with a concert piece," said Goss. "We kind of turned it into a tribute to local veterans with an honor banner that will carry the name, rank and years of service for each of 1,000 veterans."

The flag-like banner will be carried in the parade to announce the band. Names of the veterans will be embedded in the stars and stripes. So far 350 families have participated in the fundraising effort, Goss said.

Jonas Ardillo, 17, plays the mellophone, although his favorite instrument is his voice. The baritone has been singing since the third grade. He started the marching band as an eighth grader and will take part in singing the Air Force hymn that will be performed near the show’s conclusion. Jonas said he appreciates the discipline, focus and special experience that being a member of the marching band offers.

"Marching band is such a unique thing to people on the outside. Of all the things I've done, a marching band is the most complicated. A school musical is intricate, but you're not dealing with the weather. There are no parents, no equipment. The marching band is a moving experience."