TORONTO – The city announces itself through traffic long before the heightened skyline glints into view, an early hint to northbound drivers that they’re approaching one of the fastest-growing cities in North America.

“I don’t think most Americans understand the scale of what’s going on in Toronto,” said Frank Clayton, a senior research fellow at Ryerson University who in May calculated Toronto’s population growth eclipsed that of every other U.S. and Canadian city. Even less is understood about how that growth, past and future, affects Western New York – a region that has long courted Canadian investors and tourists.

Economists blame U.S. federal policies and a poor exchange rate for hampering ongoing efforts to attract Torontonians to a region that needs their tourism dollars and investment. Meanwhile, Ontario is expanding at such a fast clip that one Bloomberg pundit joked, in 2017, that Buffalo should secede and attempt to join it.

“Toronto is becoming one of the key places for growth in North America, and that should offer a strong economy and quality of life for people on both sides of the border,” said Cecil Foster, the chair of the University at Buffalo’s Transnational Studies Department. “I think that’s one of the things we talk about and don’t do much about: treating the entire region as one region.”

As a drive north to Toronto makes clear, however, the region contains economic extremes. Rush-hour traffic on the QEW begins stalling 30 miles outside downtown Toronto because the highway wasn’t built for the 400,000 vehicles that now traverse some sections daily. 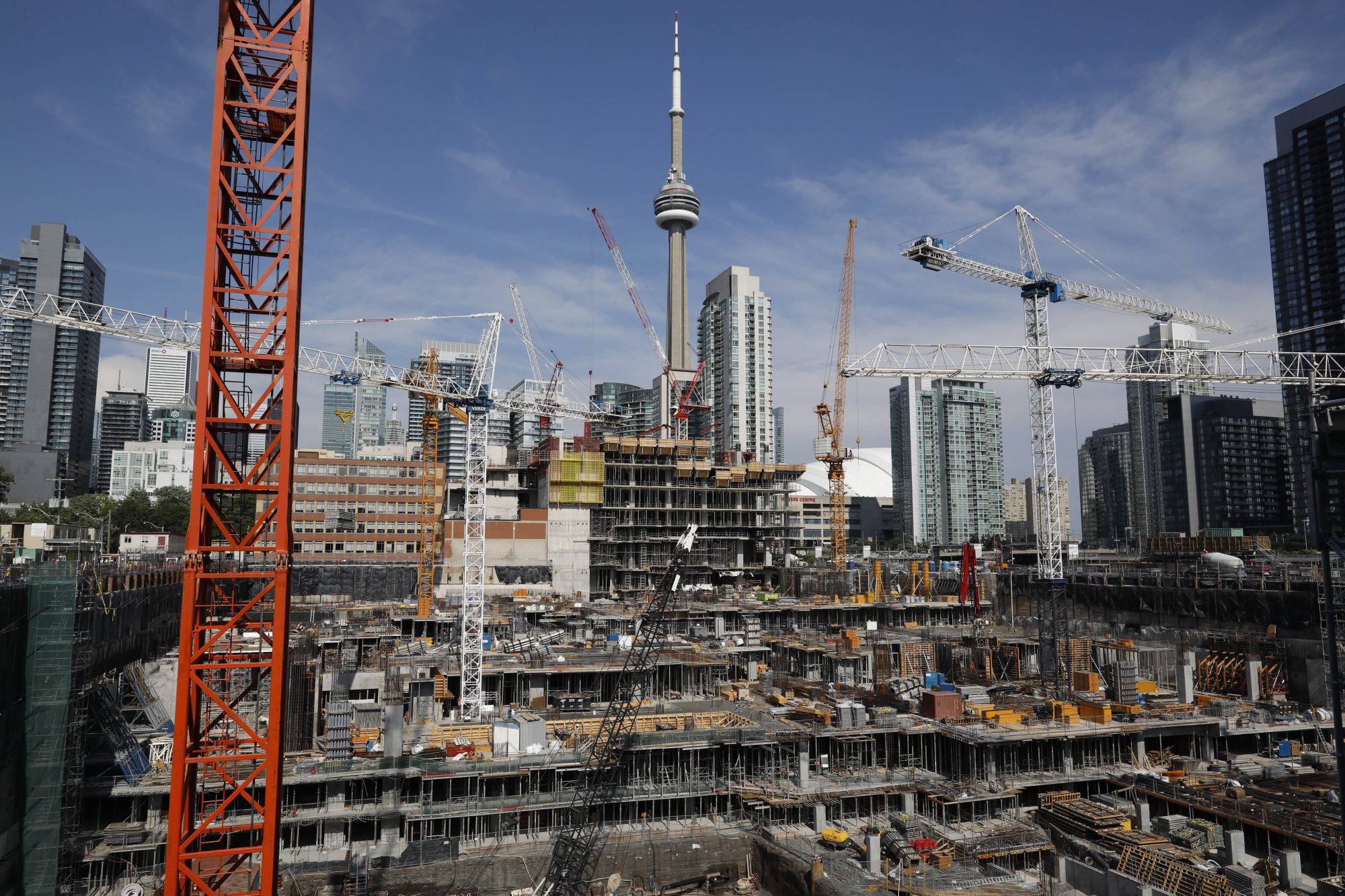 Tower cranes at the site of "The Well," currently the largest construction project in Toronto. (Derek Gee/Buffalo News)

By the time the sludge of cars gets to Toronto’s city limits, speeds have slowed to stop-and-go. Patioed condos rise up like cliffs on either side of the waterfront expressway, bringing commuters almost eye-level with residents’ bikes, potted plants and cafe tables. City real estate has grown so valuable, said Craig White, the managing editor of development-news site Urban Toronto, that developers began breaking ground beside on-ramps, in alleys, tucked against expressways, and on top of existing schools and condos.

“There’s this constant influx of people here,” White said. “So we can always sustain new development.”

Economists point out that Toronto’s population has been growing for decades, if not always at its current pitch or pace. Immigrants from countries including China, India and the Philippines have powered the bulk of the boom since the '90s, said Larry Bourne, a University of Toronto geographer. They're drawn by Canada’s liberal immigration regime and Toronto’s strong job market.

Since then, the city’s growth accelerated with continued immigration and strong employment gains in sectors like finance, tech and medicine. A recent report by the investment firm CBRE ranked Toronto third among North America’s major technology centers. The city is also the planned site for the first “smart city” project by Google sister company Sidewalk Labs.

Between 2001 and 2011, Toronto grew at an average rate of 13,400 people per year, according to the United Nations Statistics Division. By 2018, that number had ballooned to 77,000 new residents – more than Phoenix, San Antonio and Fort Worth combined, according to Clayton’s analysis. 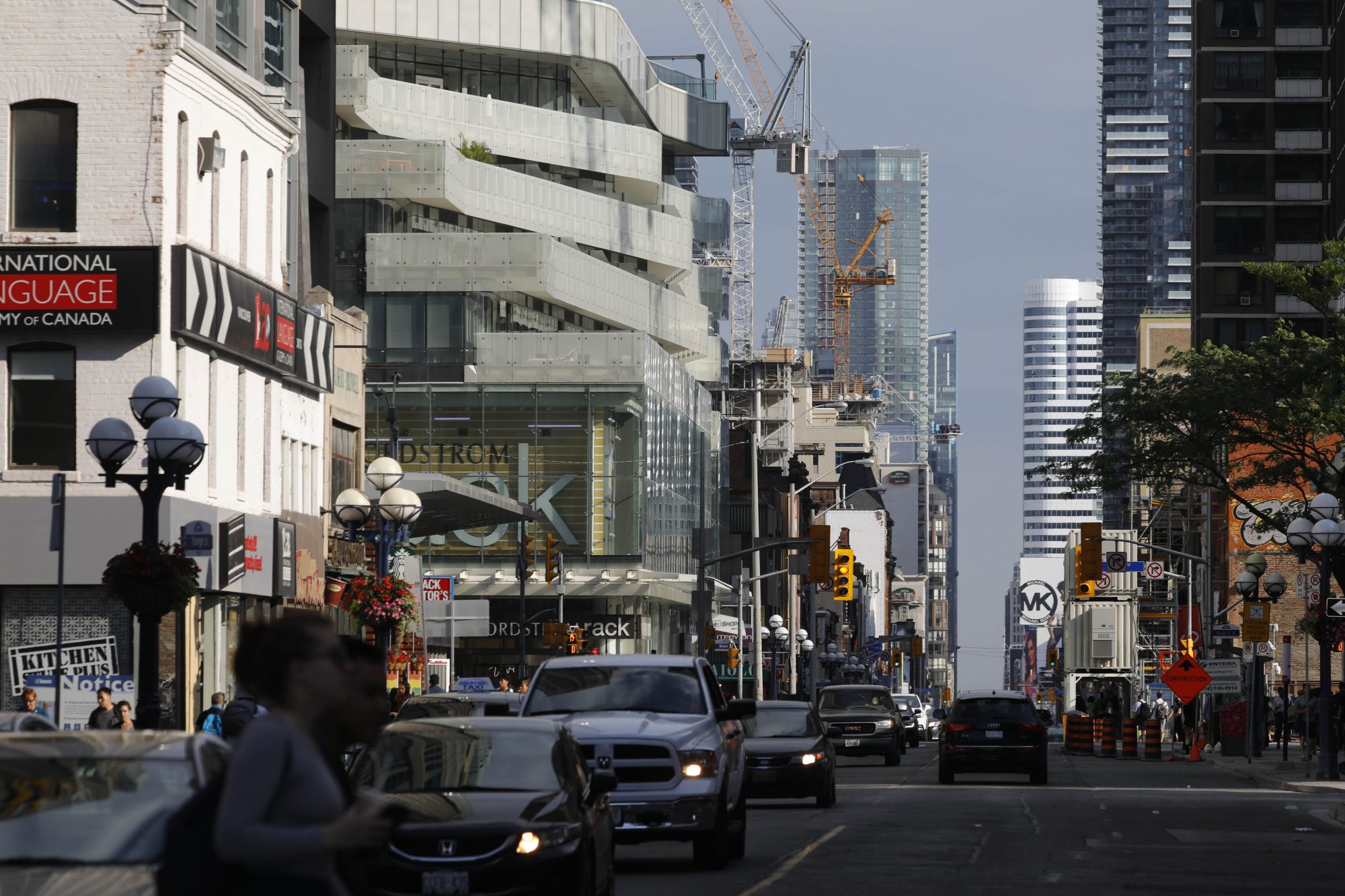 Construction cranes in the Toronto skyline indicate growth, in a view down Yonge Street at Bloor. (Derek Gee/Buffalo News)

At the area’s current growth rate, University of Toronto researchers predict, Toronto and its suburbs will double their current populations within 50 years. That would rank Toronto behind only New York City and Mexico City in North America, and transform “second cities” such as Mississauga into dense, diverse urban metropolises.

Already, Toronto suburbs like Markham suggest the region’s future. That city, which bills itself as “Canada’s most diverse,” began attracting immigrants from Hong Kong in the late 1980s. They and other immigrants now make up almost 60 percent of its much-expanded population. The massive Taste of Asia festival calls Markham home, as does the Federation of Chinese-Canadians. A large Asian mall, built on the former site of a farm-themed shopping and entertainment complex, sells dried ginseng and Lucky Cats next to jugs of Canadian maple syrup.

Sultan Alam, an electronics salesman who has lived in Markham since 1998, said he sometimes feels he left his native Pakistan and landed in Hong Kong. Much of his family emigrated to Florida at the same time he did, he said. But he chose Canada and has stuck with it since, because the country promised far shorter wait times to its visa applicants.

He and his wife now live in a neat brick house in a winding subdevelopment, and his daughter studies business at the University of Toronto.

“Canada gave me a visa and it gave me an opportunity,” said Alam.

Toronto’s boom has not been without complications. Housing prices more than doubled between January 2010 and January 2017, according to the Canadian Real Estate Association, and fell back only slightly since then. Toronto’s schools and subways, much like its roads, also clog with more people than they were built to handle. In April, Ontario Premier Doug Ford announced a multi-billion-dollar subway expansion plan.

In some parts of Toronto, particularly downtown and along the waterfront, residents have raised alarms over shrinking green spaces, demolished “heritage” buildings and the long shadows new towers cast over streets. High prices pushed some ethnic communities out into the suburbs, away from the central neighborhoods they historically called home.

A recent article in the Toronto Sun even fretted the city would soon run out of elevator repair workers with so many high-rises going up. (While the city built some 89,600 units in the past five years, the paper concluded a “crisis” had not yet struck.) 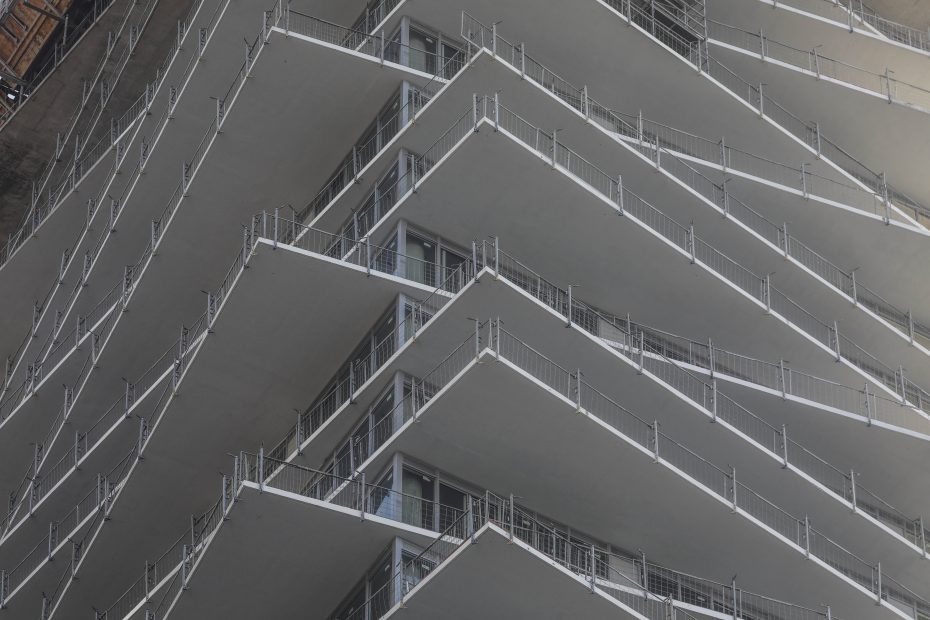 All this change forced Toronto to bulk up its city planning division, said Oren Tamir, a planning manager in the department. Tamir’s purview includes Yorkville, a high-rent, central neighborhood best-known for its luxury boutiques and bohemian origins. Today, visitors who shoulder down the district’s sidewalks pass clusters of two-story, brick-fronted shops and quaint Queen Anne houses -- silhouetted against the jarring, space-age backdrop of 80-floor, glass-and-steel towers.

The neighborhood mixes high-rises with the “human scale,” Toronto’s future with its past.

For Buffalo, the question now is whether Toronto’s “reimagining” might seep south of the border, as well. Smaller cities in Ontario’s Golden Horseshoe are booming, too, thanks in part to Toronto's spillover. And Toronto and Buffalo, incorporated two years and 100 miles apart, kept pace with each other until the 1950s, said the University of Toronto's Bourne, who used to assign a project comparing the cities’ trajectories to his undergraduate students.

That history is interesting, Bourne said, because while Buffalo and Toronto share important characteristics, they suffered opposite fates: Buffalo shrinking with the sunset of the Erie Canal and Rust Belt manufacturing, and Toronto swelling when the Quebec separatist movement made it the favored home for Canada’s banks.

As late as the 1970s, Torontonians considered Buffalo a nightlife destination. Many of their restaurants still closed on Sundays and maintained separate male and female entrances.

Torontonians "would come to shop, they would come for jazz – Buffalo was the hive,” said UB’s Foster, who lived in Toronto for more than three decades. “But then people started going the other way, and that hasn’t changed.”

VBN plans to spend $500,000 on ad campaigns in Ontario this year, including one wraparound ad that quotes Anthony Bourdain and will appear on Toronto subway cars. The Niagara Frontier Transportation Authority also runs bus, billboard and search-based ads in Toronto and throughout Ontario, promising Canadian travelers “Buffalow fares” at the airport to their south.

“We’re making the case that we’re the prime airport,” said NFTA’s Pascal Cohen, who hypes Ontario’s population growth when pitching new airlines on the area. “We serve both the New York and the growing Canadian market.” 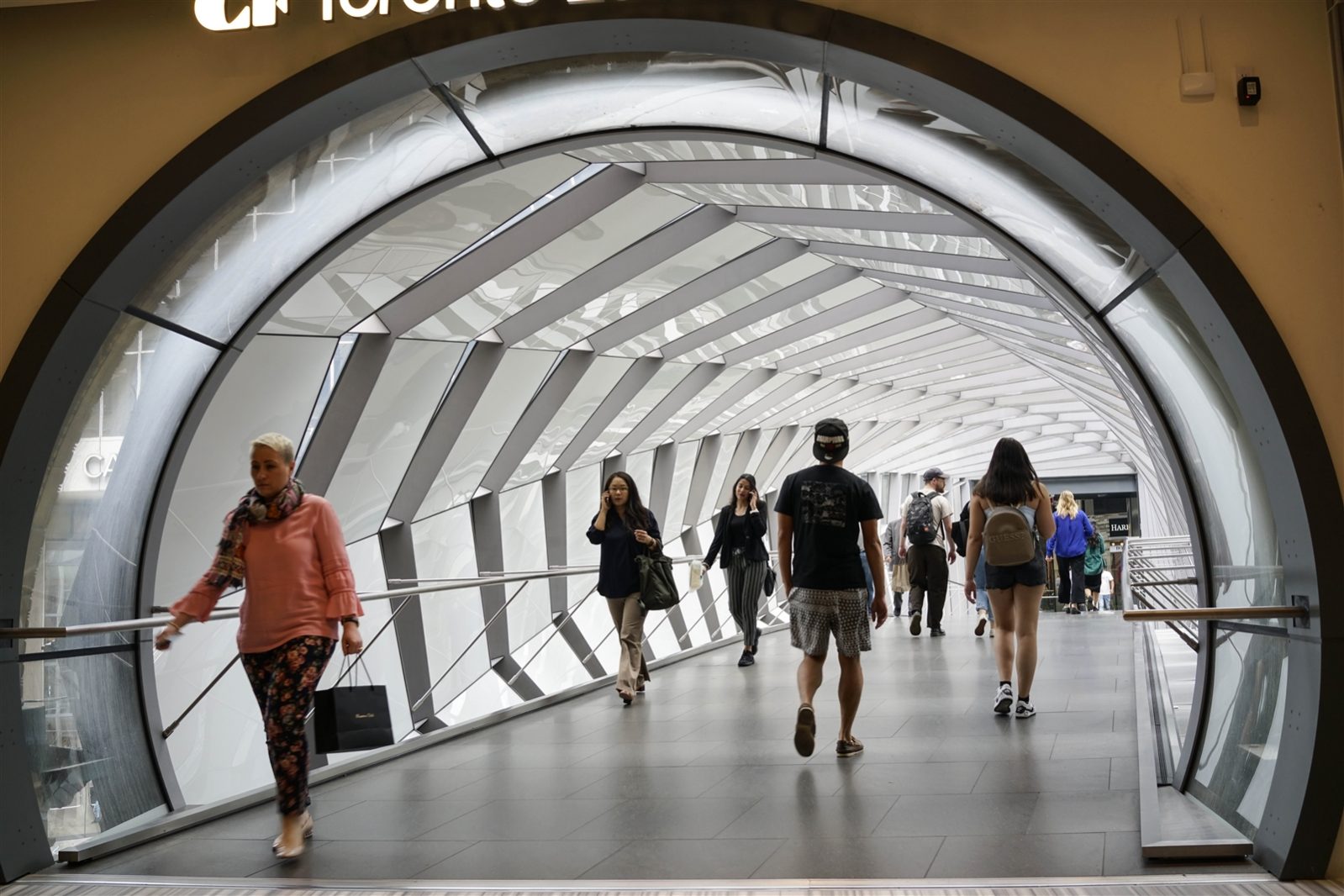 A pedestrian walkway over Queen Street at the Eaton Center in Toronto. (Derek Gee/Buffalo News)

“They’re going to run out of room at some point, and they’re going to look at the U.S.,” echoed Craig Turner, who heads the World Trade Center Buffalo Niagara and helps businesses from both countries expand across the border. “It’s a real opportunity … And it’s very important that we communicate the benefits of doing business in Western New York to that audience.”

But so far, neither Toronto’s boom nor Western New York’s attraction efforts have yielded a windfall for Buffalo, said Bruce Fisher, a SUNY Buffalo State economics professor. He and others blame significant outside deterrents, such as an unfavorable exchange rate, trade uncertainty and long wait times at the border. Inbound crossings at Western New York’s three international bridges plummeted after 9/11 and never recovered, topping out at 788,000 in March 2019 -- compared with 920,000 in 2009 and 1.2 million 10 years earlier.

Other common indicators of cross-border commerce — from the Ontario Health Ministry’s annual spending in Buffalo to the share of Canadians flying out of BUF and buying tickets to Bills’ and Sabres’ home games — flat-lined or fell in recent years, according to their correspondent organizations. Canadian business expansions and investments are also stable, Turner said.

“There’s a disincentive for both shoppers and investors because of the exchange rate in particular,” Fisher said. “That has nothing to do with local policy, and everything to do with international exchange rates” -- which may grow worse for Canadians in the future, he added.

Still, Buffalo may find an upside in all this, even if it’s not strictly economic.

On a recent Thursday evening, a dozen or so Buffalonians waited in line to board a double-decker bus home from Toronto, having spent the day at the city's parks, restaurants and concerts. Easy access to those growing, big-city amenities improves quality of life in Western New York, points out Buffalo State economist Joelle LeClaire. She trekked across the border in May to see former First Lady Michelle Obama speak there.

"I'm not convinced we're going to see any big spillover effects in our region," LeClaire said.

“But I still appreciate the proximity of Toronto,” she added. “It gives us so much in the way of things like concerts and day trips.”