The elation in Wheatfield arrived with a note of caution. A half-century ago this weekend, legions of skilled workers from the old Bell Textron plant could rejoice at playing a direct role in helping America put a man on the moon.

That sense of triumph had to be kept in check. Those workers understood, through the work done by their own hands, why the make-or-break moment within that staggering feat was still to come.

The biggest unknown was whether astronauts Neil Armstrong and Buzz Aldrin could find a safe way off the lunar surface, in a desolate place some 240,000 miles away from home, and it all depended on an ascent engine made by Bell Aerosystems, later Bell Aerospace, now part of Moog of East Aurora.

“If it didn’t work,” Bill Swenson said, “they’d still be on the moon.”

We know today just how deep that worry went throughout the National Aeronautics and Space Administration. If anything went wrong, there could be no rescue. President Richard Nixon already had a speech of condolence prepared if Armstrong and Aldrin were marooned, with no way out.

Now 97, Swenson was a firsthand witness to that electric tension.

Raised in South Buffalo, his childhood imagination kicked into gear in the 1930s with “Buck Rogers,” a comic strip featuring a planet-hopping hero in outer space. Swenson – only 10 when his father died – recalls standing outside his home and looking up at the night sky.

He could hardly guess he would someday know the real-life first man on the moon.

After graduating in 1943 from the University of Michigan, he was hired as a test engineer by Bell, a cutting-edge aviation company. By the late 1960s, Swenson was serving as Bell's regional marketing manager in Houston, where NASA's Apollo program was attempting to send American astronauts to the lunar surface.

On July 20, 1969, Armstrong and Aldrin guided the lunar module called the "Eagle" to a touchdown on the moon, using piloting skills Armstrong honed on Earth in a wild-looking lunar landing training vehicle made by Bell, known as an LLTV.

Yet Swenson – who considered Armstrong a friend – said he joined many Bell employees in looking toward a moment that occurred on July 21, at 1:54 p.m. 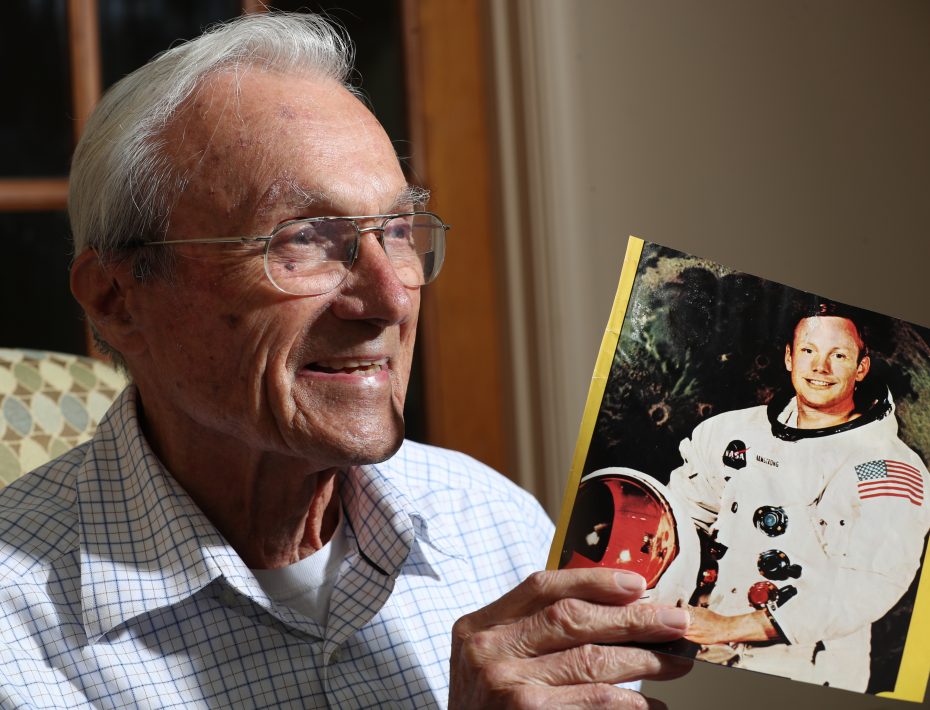 That was when the Eagle left the surface of the moon. Armstrong and Aldrin needed to pull off a tricky rendezvous with the Columbia, the command module piloted by Michael Collins. For that to happen, the rockets on the Eagle had to fire successfully, with everything based on an ascent engine produced by Bell.

"I think we all knew how terrible it would be if we got them onto the moon, and then had no way to get them off and had to leave them there," said Joseph Mollendorf, a distinguished teaching professor in engineering at the University at Buffalo who spent an unforgettable summer, at 22, working on the ascent engine, each joint demanding an electron beam weld.

No one could be sure that system was undamaged when the Eagle landed. If the moment seemed secondary to the millions who had watched Armstrong take the first step on the moon, it carried gripping power for those who understood what was at risk. Indeed, in the most frightening lunar run-up to that departure, Aldrin used a felt tip pen to fix a circuit breaker vital to the launch.

The rockets – built by workers from Western New York – did their job. With the comfort of hindsight, Swenson can say it was no surprise. The Bell operation always had a certain space age swagger. Swenson remembers when Larry Bell was a presence at the plant near Niagara Falls that carried his name, a groundbreaking builder of supersonic airplanes who died in 1956 as an American legend.

Swenson also knew Walter Dornberger, who served the Germans as a military scientist during World War II, then brought his passion for rockets and space travel to Bell. Swenson said Dornberger and other engineers had their eyes on the moon even before President Kennedy gave a landmark address in 1961, calling for a quest to reach the lunar surface by the decade's end.

While an estimated 400,000 Americans played a role in Apollo 11's journey, it was impossible to predict what might happen once Armstrong and Aldrin descended to the moon. 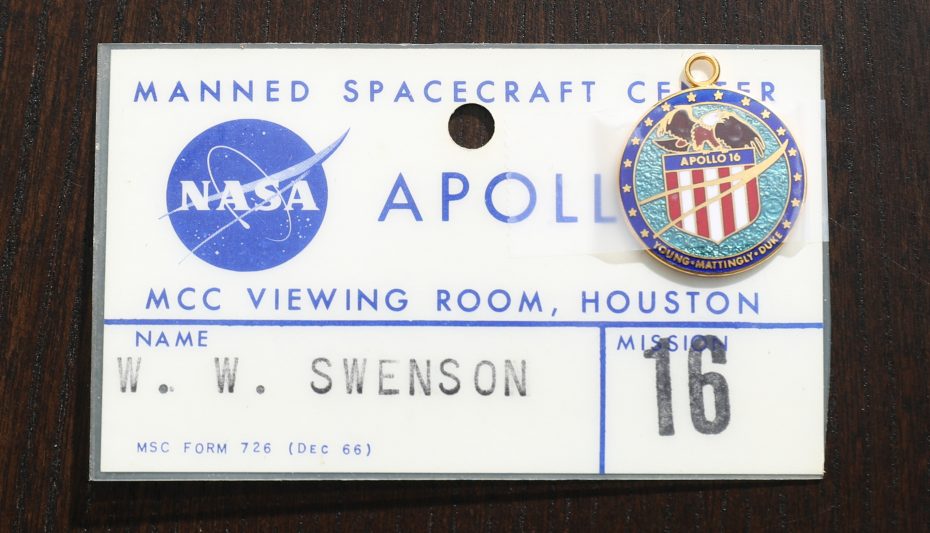 “Everything they did,” Swenson said, “was for the first time.”

Today he shares a dream with his old friend Hugh Neeson, 85, a former Bell engineer and vice president who is development director at the Niagara Aerospace Museum, not far from the yellow brick complex Bell left decades ago. The two men hope this lunar remembrance might rekindle some qualities they remember wistfully.

They recall a sense of national unity, galvanized by wonder.

"Our people were up there," Swenson said, as the world looked toward the moon.

That feeling was especially keen in the old plant. A 1969 article in the Niagara Gazette said Bell Aerosystems was involved in five different aspects of the Apollo 11 launch. At one point, the paper reported, more than 700 employees helped with the “engine ascent” of the lunar module. 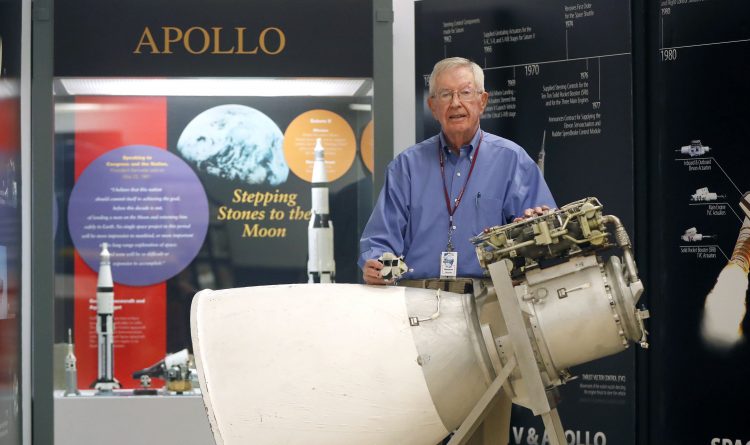 Former Bell Aerosystems executive Hugh Neeson with one of the ascent engines built by Bell for the Apollo lunar module, a key element in bringing home the first astronauts on the moon, at the Niagara Aerospace Museum in Wheatfield. (Mark Mulville/Buffalo News)

Many others were involved with design, construction and testing of the lunar landing research vehicles – known as LLRVs – and their closer-to-launch successors, the LLTVs, which looked something like flying monkey bars, tethered to a seat.

They attempted to simulate what no one had experienced: The astronauts needed some way to practice a landing on the moon. In an event from 1968 recreated in “First Man,” a recent Hollywood film, Armstrong was nearly killed when his 22nd flight of an LLRV ended in a fiery crash. He ejected at the last second.

Wayne Ottinger, an engineer central to that process for NASA and then Bell, said he moved about 120 technicians and engineers from Western New York to Houston to work on the initiative. As for Armstrong, until his death in 2012, he would always say that the LLRV – and the LLTV that succeeded it – were critical in the success of every mission to the moon.

Bell and Moog were hardly alone in local contributions to Apollo, as Neeson and other historians point out. Taylor Devices, Carleton Controls and the Cornell Aeronautical Laboratory were among other Buffalo-area industries that performed work for NASA. With even the smallest parts, every company faced the highest threshold.

"Everything had to work," Neeson said of a venture in which any failure could lead to tragedy. He speaks of Apollo as “the penultimate STEM event,” a high-stakes endeavor wrapping together extreme elements of science, technology, engineering and math.

Swenson, papers and records spread before him at his Amherst home, guesses most of his surviving colleagues from the Apollo days join him in this feeling:

In those days, Swenson lived in a sprawling Houston neighborhood shared by many astronauts. On a golf course one day in the early 1970s, he bumped into Alan Shepard, an astronaut famous for hitting golf balls on the moon. Swenson asked Shepard to trust him with a secret: What brand of golf ball had he used up there?

Shepard smiled, but refused to say.

A few years earlier, during the buildup to the Apollo 11 launch, Swenson and his late wife, Ruth, invited Armstrong and some of his friends over for dinner. Their shared background sealed a friendship that lasted for years.

“He was an engineer,” Swenson said, “and highly technical and progressive.” 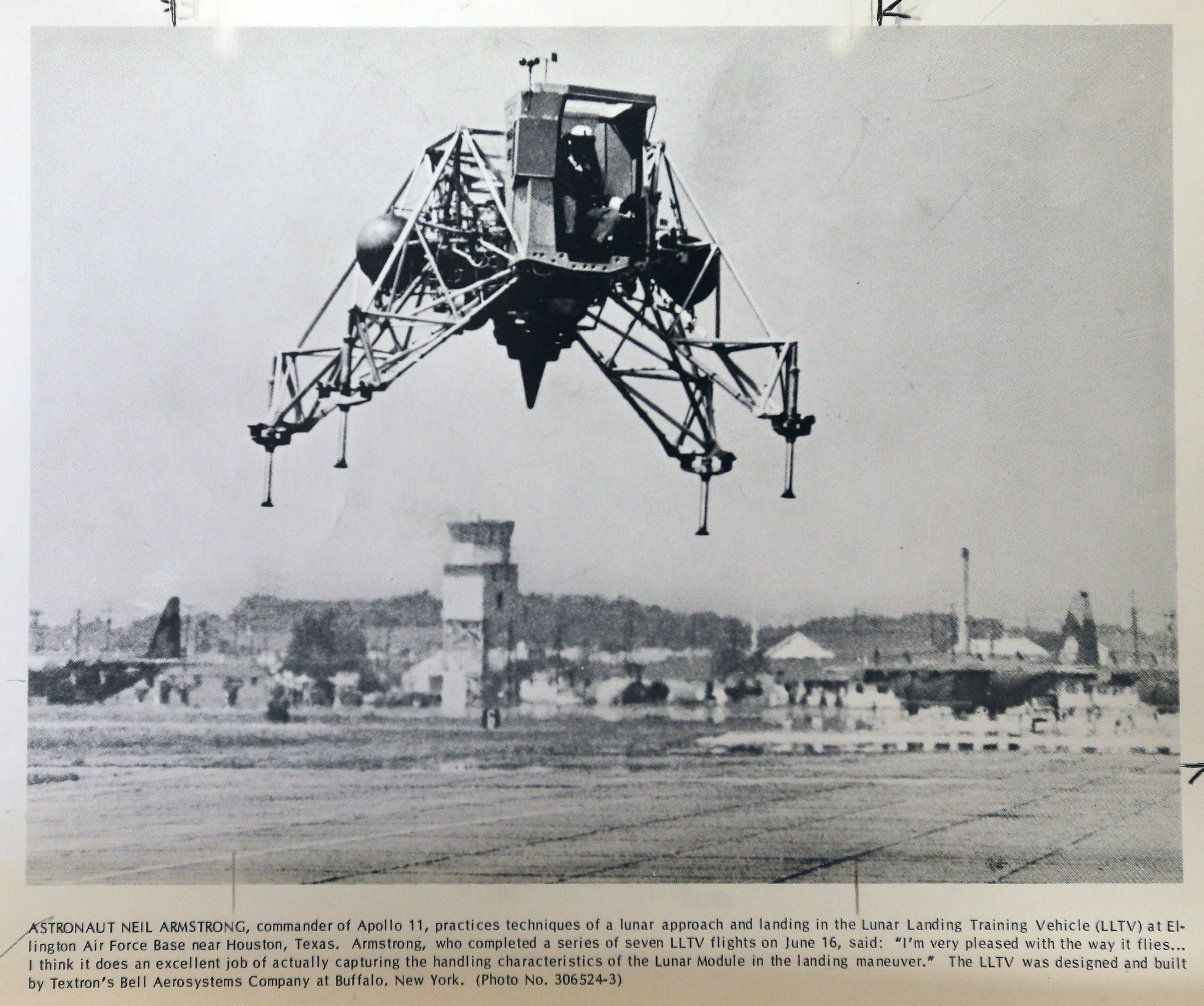 Astronaut Neil Armstrong, commander of the Apollo 11 mission and the first man to walk the moon, "practices techniques of a lunar approach and landing in the Lunar Landing Training Vehicle at Ellington Air Force Base near Houston, Texas, on June 16, 1969." (Photo courtesy of the Local History Room at Niagara Falls Public Library)

In 1974, with Apollo ended and the American space program in transition, Swenson said Bell laid him off, along with almost 200 others. Years later, he would retire as an assistant dean of engineering at the University at Buffalo.

Amid the excitement of this anniversary, Swenson has been poring through his journals from the Apollo years. Many of the colleagues he and Neeson respected are now gone, including Bill Bascom, a pioneering African American engineer at Bell.

Ottinger recalled how Bascom confronted and overcame racial barriers in Houston, where he was so involved with the avionics of the LLTV that he once told the Amherst Bee he witnessed the crash Armstrong survived.

At 97, Swenson smiles at the idea of a kid from Buffalo who loved Buck Rogers growing into an engineer who helped a man walk on the moon. Still, if you ask for the moment from 50 years ago that provides him with the deepest gratitude, it is what happened a day after Neil Armstrong took that epic step.