NIAGARA-ON-THE-LAKE, Ont. – The Shaw Festival season unfolds in waves of plays. The enormous logistics of the enterprise requires coordination of rehearsals and production, followed by juggling the roster of 11 shows, plus special theater events, spread over the Shaw’s theater spaces.

The first titles, which began to roll out in the spring, bode well for what is turning out to be a strong season. In fast succession, I saw “Rope,” “Getting Married,” “Brigadoon” and “The Horse and His Boy.”

On the top of my list is the Shaw’s glorious and opulently romantic production of Alan Jay Lerner and Frederick Loewe’s “Brigadoon,” with ingeniously revised book by Brian Hill. Such a delightful production took me by surprise, as I seldom feel enthusiastic about the musicals at the Shaw Festival. Director Glynis Leyshon, however, proves her mettle, tapping into this Golden Age musical with fresh exuberance.

First performed in 1947, “Brigadoon,” along with shows like Rodgers and Hammerstein’s “Oklahoma” and “Carousel,” was among the first generation of great American musicals. Echoes of Fritz Loewe’s Viennese background are evident in “Brigadoon,” which bridges Broadway Golden Age musicals with European operetta. We find ourselves in an exotic locale, where happy villagers welcome us into a world in which true love will magically prevail. From “Brigadoon,” to “My Fair Lady,” to “Gigi” to “Camelot,” this was a formula that Lerner and Loewe would never abandon.

“Brigadoon” pairs legit voices with Broadway belters to deliver one of the most satisfying scores in the history of Broadway.

This is the story of two Americans, Tommy and Jeff, who get lost in the Scottish Highlands while on a hunting trip. They stumble upon an oddly old-fashioned town called Brigadoon that’s not on the map. It turns out that this is an 18th century town that has been rescued from the evils of the world through divine intervention. At the end of each day, the residents go to sleep, and when they wake up in the morning, 100 years have passed.

There’s a catch. If any resident of Brigadoon should step foot across the town boundary, the miracle will end and Brigadoon shall cease to exist. 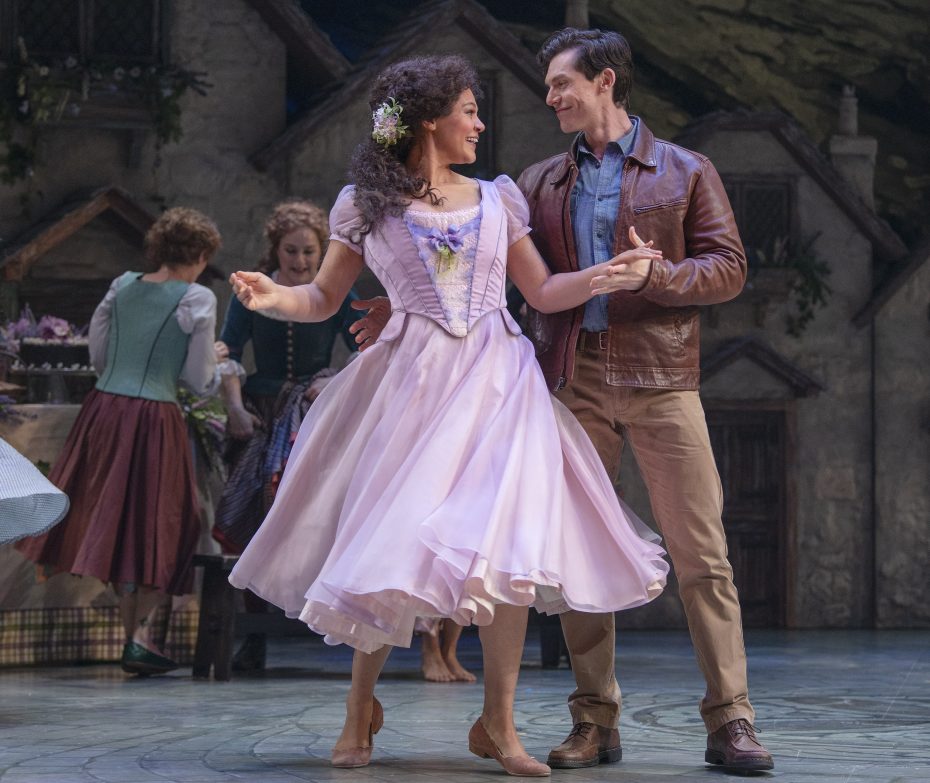 Fiona (Alexis Gordon) and Tommy (George Krissa) are two people from a different time who fall in love in the magical land of "Brigadoon" at the Shaw Festival. (Photo courtesy of Emily Cooper)

If that’s not complicated enough, Tommy is engaged to marry his girlfriend back home in the States, but his heart just isn’t in it – especially not after he meets Fiona (played by Alexis Gordon), a beautiful 18th century Scottish lass with an exquisite soprano singing voice. We easily understand why George Krissa, as Tommy, falls in love with her.

Leyshon clearly understands that above all, “Brigadoon” spins a swell yarn of love and magic. She imbues her production with suspense and excitement. All elements fuel this, from Paul Sportelli’s thrilling and luxurious musical direction, to project design by Corwin Ferguson. The set by Pam Johnson is simultaneously traditional and modern. (The effect of a volley of Scottish swords free falling from the flies to the stage floor that ends act one is startling and exhilarating).

There are moments that gave me pause. The cloyingly cutesy interpretation of the oversexed “Meg,” a secondary character in the mold of Ado Annie from “Oklahoma,” the girl who can’t say no, feels like an afterthought.

Meg, with her indefatigable joy for life is a contrast to tragic Harry Beaton. Played by charming Kristi Frank, we are never quite clear where we’re going with this character, except for easy laughs. The literal staging of her show-stopping “My Mother’s Wedding Day,” in which the cheerful chorus acts out scenes just as Meg describes them reminded me of children’s theater, and does not approximate the standard of Linda Garneau’s otherwise excellent choreography. And not to spoil a fairly familiar plot resolution, but when Tommy returns to Brigadoon, you’d think Fiona might be slightly surprised.

Given the overall richness of the production, however, to quibble over trifles would be ungrateful.

With just one flash of his incandescent smile, Matt Nethersole flat out steals this show every time he enters as Charlie Dalrymple. When he speaks, when he sings, and good heavens when he dances, he is irresistibly adorable. When he is ignited to anger, he redefines the idea of a “fiery Scott” elevating the Charlie, Harry and Jean triangle from subplot to central focus. 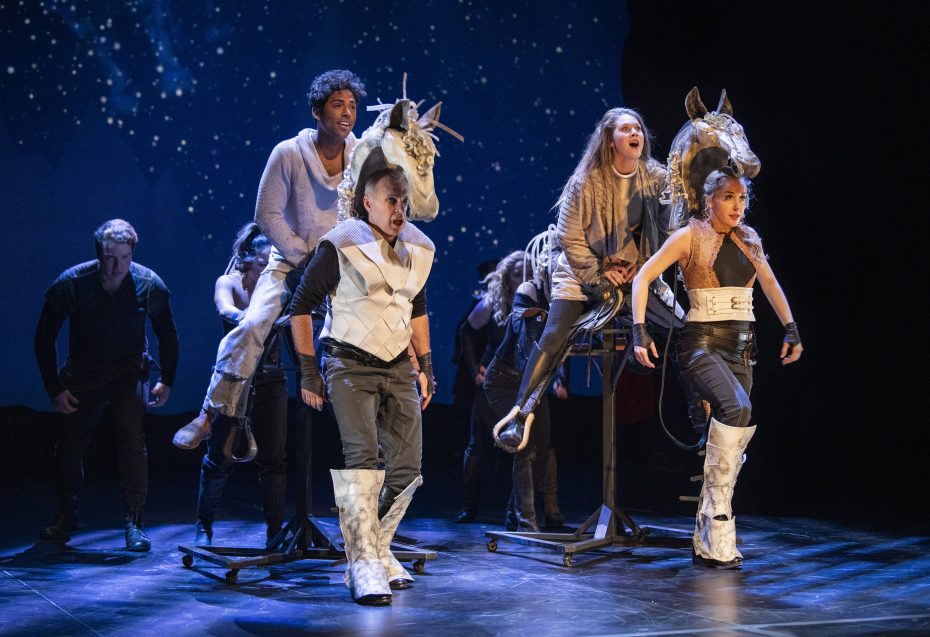 Jay Turvey, left, Matt Nethersole, Madelyn Kriese and Kristi Frank star in "The Horse and His Boy" at the Shaw Festival. (Photo courtesy of Emily Cooper)

Interestingly, Nethersole also stars in “The Horse and His Boy,” and his performance is the main reason to take in that meandering and overlong entertainment.

Indeed, one of the great pleasures of the Shaw Festival is the chance to see marvelous actors play contrasting roles in various plays.

Madelyn Kriese, who plays Jean, Charlie’s fiancée and sister to Fiona in "Brigadoon," also is in “The Horse and His Boy.” Having seen her as Jean enriched the experience of seeing her showcase such great versatility when she transformed herself into the feisty young heroine of the children’s show.

"A Horse and His Boy” retells the C.S. Lewis story from the Narnia series, and takes far too long and far too meandering a road to do it. It does look marvelous. Children who know the book will likely love it.

Mike Nadajewski is mirthful perfection as Tommy’s comical, yet protective best friend, Jeff. (And seems to be an entirely different actor as scary and imperious Kostya in “The Russian Play,” over at the Royal George Theatre.)

I loved Alexis Gordon as Fiona in "Brigadoon." She possesses the requisite beauty and exquisite soprano singing voice. I had also enjoyed her as Leila Arden, a woman with an uncanny talent for saying the wrong thing at the right moment in the disturbing, yet amusing Shaw Festival production of the murder-thriller “Rope,” a riff on the Leopold and Loeb story now playing at the Royal George.

Travis Seetoo, who plays brooding Beaton in “Brigadoon,” also is in “Rope,” playing contrasting tormented young men and striking a vivid dramatic figure on both occasions. In “Brigadoon” he is a boldly reckless young man, rejected in love. In “Rope” he is the conflicted passive partner in an ill-conceived murder. He is fabulous in both.

Another luxury of the Shaw Festival is the vast range of theatrical styles being showcased. “Brigadoon” is an old-style Golden Age musical. Patrick Hamilton’s 1929 play, “Rope,” which also served (and is best known) as the source for the 1948 Alfred Hitchcock film of the same title, is an old-style thriller.

“Rope” makes an interesting contrast to Mae West’s “Sex,” as it opened on Broadway just shortly after the morality crackdown of 1926, in which West’s play was the target, but gay oriented “The Virgin Man,” and “The Captive” were swept up and closed as collateral damage. “Rope” also features a 1920s take on gay characters, naturally depicted as villains, but at a time when featuring gay characters of any type was an activist gesture. 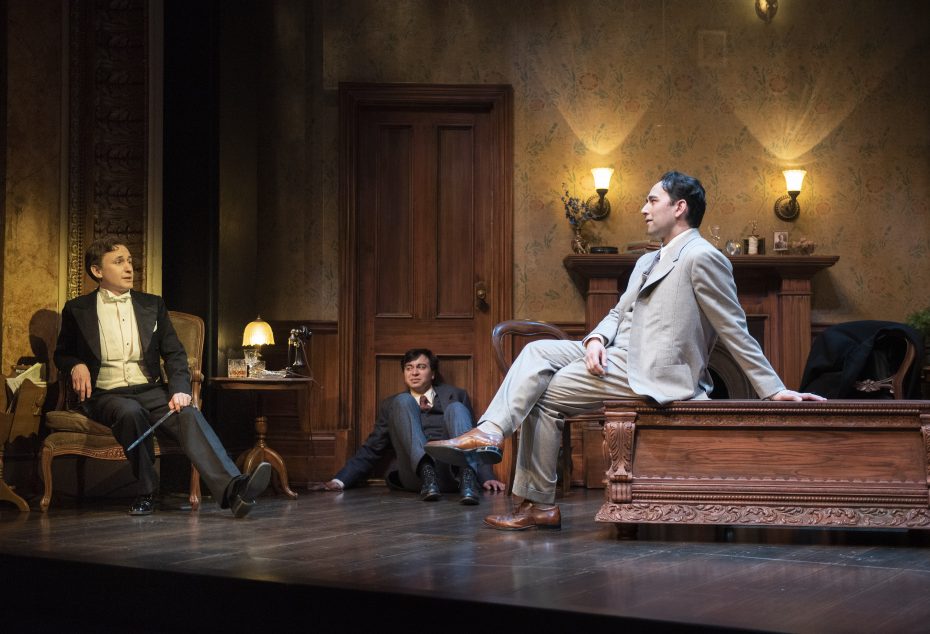 “Rope” is an engaging night of psychological intrigue. Two privileged young men, Brandon and Granillo, played by Kelly Wong and Seetoo, murder another young man, simply for the thrill, and then put his corpse into a decorative chest, center stage. As the play begins, the deed already has been done. They then arrange for friends, including the victim’s father and aunt to pay a visit, using the chest containing the body as a dining table.

To call the play a thriller is to downplay the idea of “thrills.” This is a quiet mind game of a play, handsomely staged by Jani Lauzon. The production showcases one of the great strengths of the Shaw Festival, the ability to breath life into old plays while providing a textbook demonstration of superior ensemble performance. Where else could we indulge in Patty Jamieson’s delicious performance as Mrs. Debenham, a character who barely speaks and doesn’t influence the plot, but who, nonetheless adds dimension to the production? 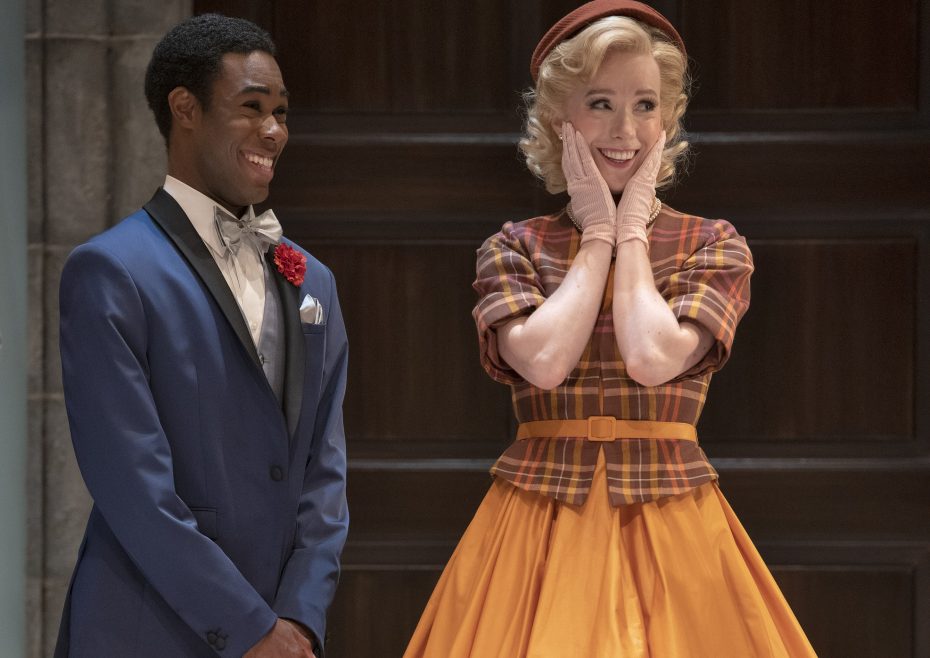 Cameron Grant and Katherine Gauthier are wonderful in "Getting Married" at the Shaw Festival. (Photo courtesy of David Cooper)

Finally, nowhere is the work of Bernard Shaw done as well as at the Shaw Festival. “Getting Married” is widely regarded to be a playful bit of intellectual bantering on the topic of marriage and divorce, disguised as a play.

Cameron Grant and Katherine Gautier are charming as a couple who get cold feet on their wedding day after reading pamphlets that expose the perils of marriage. Written at a time when divorce was taboo, in a country where marriage can still only be dissolved for cause, the repartee is, nonetheless, fresh.

This is, unsurprisingly, a first-rate production, directed by Tanja Jacobs. When Canadian stage legend Chick Reid, as the quick-witted mother of the bride, gets billed below the title, you know you’re seeing a first-rate cast. “Getting Married” also features dreamy Martin Happer as General “Boxer” Bridgenorth, a man who has proposed to and been rejected by the same woman 10 times; Claire Jullien plays Lesbia Grantham, the woman in question. The show also features the unmatched talent of Canadian star Steven Sutcliffe.

Damien Atkins plays multiskilled William Collins; wryly funny Andrew Lawrie as humorless the Rev. Oliver Cromwell Soames; and Monice Peter as elusive and seductive Mrs. George Collins. “Getting Married” is a Shavian treat and a perfect appetizer for the upcoming staging of “Man and Superman,” Shaw’s variation on the Don Juan theme.

As you consider your trip to the Shaw Festival, I urge you to see more than one play and treat yourself to the pleasure of seeing the same actors in more than one production.