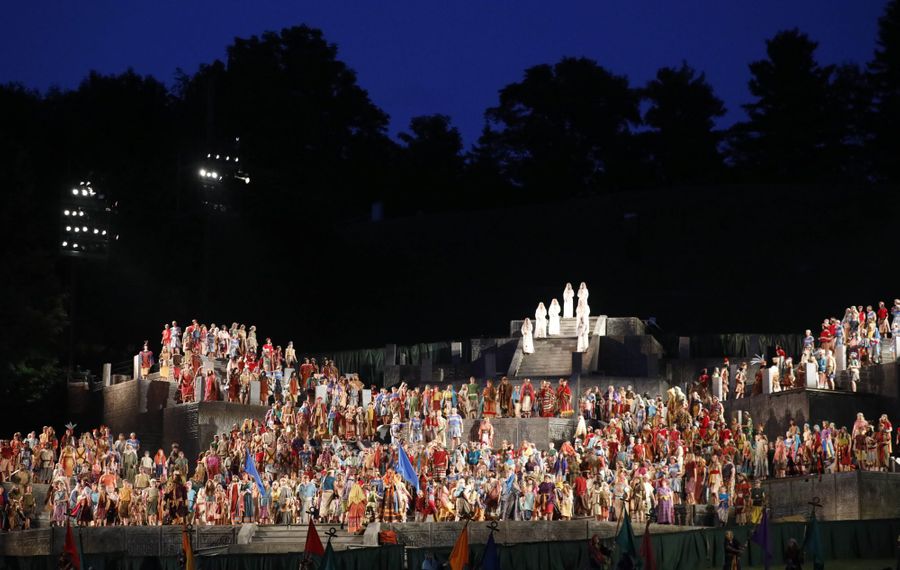 Every year since 1937, Latter-day Saints have made their way to a 10-acre patch of land east of Rochester to stage a pageant on their sacred Hill Cumorah, where they re-enact scenes from the Bible and the Book of Mormon. Members of the faith believe it was on that hill that an angel called Moroni met with church founder Joseph Smith in 1827 to reveal golden plates that would later be translated into the Book of Mormon.

The play is cast one week before opening night. The stage is assembled, light towers and special effects are trucked in. Dances and battle scenes are choreographed, lines are learned and rehearsed. Then just 17 days later, after performing for what is usually about 30,000 people, everyone packs up, ships out and Hill Cumorah is still again.

Next year, everyone will pack up and ship out for the last time, as the pageant ends its 83-year run.

The sheer scope of the event undertaking – in addition to the cast of hundreds, 150 of them work security, parking and other roles – is part of the reason the production will end in 2020. Other considerations include the cost, time commitment, security concerns and wear and tear on the church's sacred sites in the Wayne County town of Palmyra, a church spokesperson said. Most families plan their vacation around the event, and organizers prepare for it year-round. The church felt that time could be better spent on other things, such as studying together at home.

The impending close is drawing bigger crowds. Friday night's show saw its biggest audience in recent memory: 7,000 people, where 4,000 to 5,000 is more typical.

"When you're taking down those 8,000 chairs and putting them away in the truck, you get reminded it's ending," said Jakob York of Orchard Park, whose wife, Mindy, and four sons all play a part in putting on the production. "That's a bittersweet moment. It's hard to go." 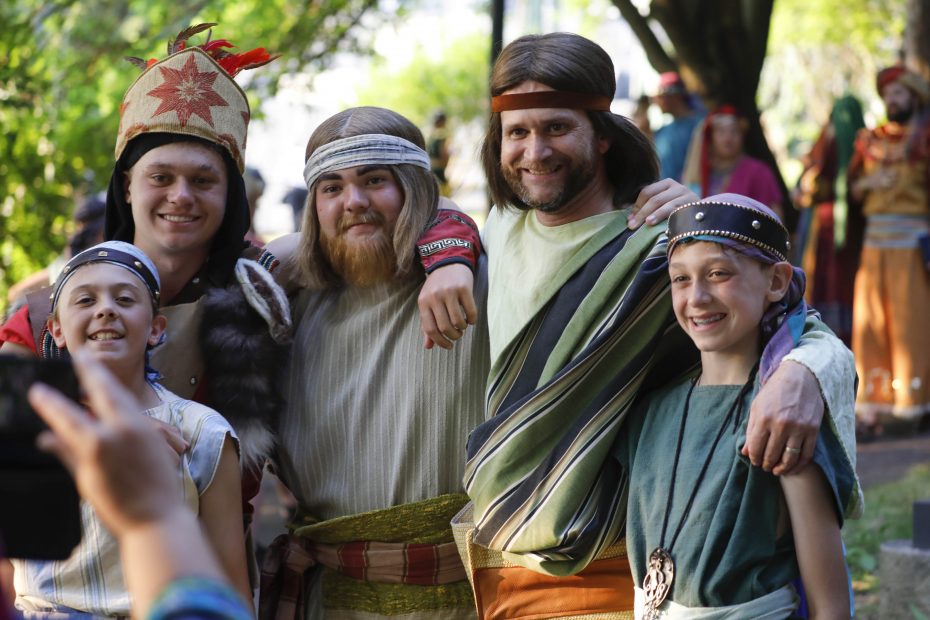 Jakob York of Orchard Park, second from right, and his sons, Kobe, 18, Luke, 16, Jude, 13, and Tate, 11, are in their costumes before a recent show. Over 750 actors and 200 crew members from around the world volunteer to put on the Hill Cumorah Pageant at the sacred Church of Latter Day Saints site in Manchester. (Derek Gee/Buffalo News)

Mindy York is working in hair and makeup this year. With just five days of training, she is curling wigs and affixing beards to men's faces with spirit gum. She and the three others in her department apparently did a good job; everything stayed put despite a downpour during Thursday night's show.

She spent Friday laying the wigs and beards out to dry in front of fans, trying to enjoy every moment of the retreat her family has cherished for years.

"If it went on forever, we’d do it forever," she said. "But since it's ending, we’ll find new traditions to begin as a family."

The production itself is an elaborate one, with prerecorded music from the Mormon Tabernacle Choir and the Utah Symphony Orchestra. The dialogue is prerecorded, too. Special effects include fireballs, water cannons, harnesses and lifts. Though the pageant is designed so that people who have no exposure to the Church of Jesus Christ of Latter-day Saints can understand it, church members come from around the world to sit in the audience.

Since he was a toddler, one of those audience members was Jason Lahti of Clarence. He has returned nearly every year since then, but has waited to join the cast until his six children were old enough to participate, too.

"After we applied we found out next year would be the last year, so we made the right choice," he said.

Though he and his family already know and understand the scriptures the pageant portrays, the feeling they get when they see it brought to life keeps bringing them back. They wanted to help bring it alive for others. 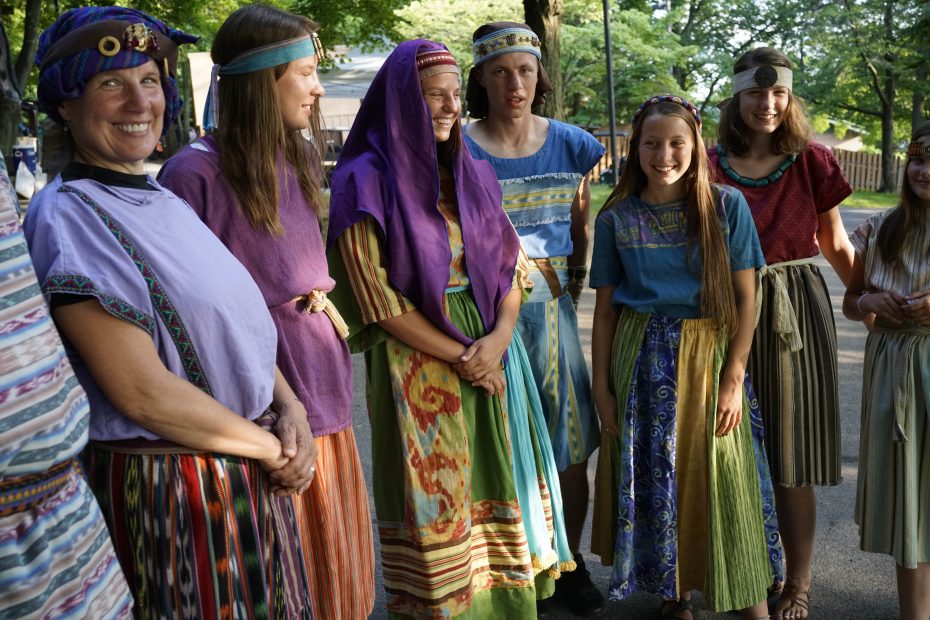 "It's a tough world we live in now. That peace and hope that Jesus can bring is what the pageant is about," Lahti said. "We want to help them experience it for themselves and discover how He can be a bigger part of their lives."

Of those who send in applications, about 760 are chosen to act in the play. There is no video to show their acting chops, just a list of family members along with ages and genders so they can all participate together.

Mindy York originally was chosen for the costume department because of her sewing skills. That meant her husband, Jakob, and their four sons – Tate, 11; Jude, 13; Luke, 16; and Kobe 18 – were automatically in.

This year, Jakob has a pretty big part playing a prophet named Alma, who Latter-day Saints believe established the church in the Americas during the reign of a wicked King Noah around 148 B.C.

He gets extra time with the directors, of which there are nine.

"I was a little bit nervous, but they work a lot with you one on one," he said. "We go through so many rehearsals, eventually it becomes more natural."

At night, his family stays in dorms they rented at nearby Finger Lakes Community College, but many people stay in tents on the grounds. There are meal plans available for purchase, but some families pack coolers and sandwiches or keep their Crock-Pots simmering throughout the day. With so many hundreds of actors in line for wardrobes and wigs, there is a dressing schedule, so Jakob is in costume for nearly four hours before the show even begins. And, as is the case with the other actors, he organizes activities for a youth group when he's not in rehearsal.

"It's a physically exhausting yet spiritually uplifting experience," he said.

After the last show Saturday, the cast and volunteers will pack up the costumes and tents and share their closing devotional. Applications for next year start in August, but no one is guaranteed a spot in the final pageant. It may be the last time the families work so closely with their friends from across the country, doing what they love.

The remaining shows take place at 9:15 p.m. from July 16 to July 20. Parking and admission are free, no registration is required and there is seating for 8,000. Attendees are also welcome to bring blankets and coolers and picnic in the grass.