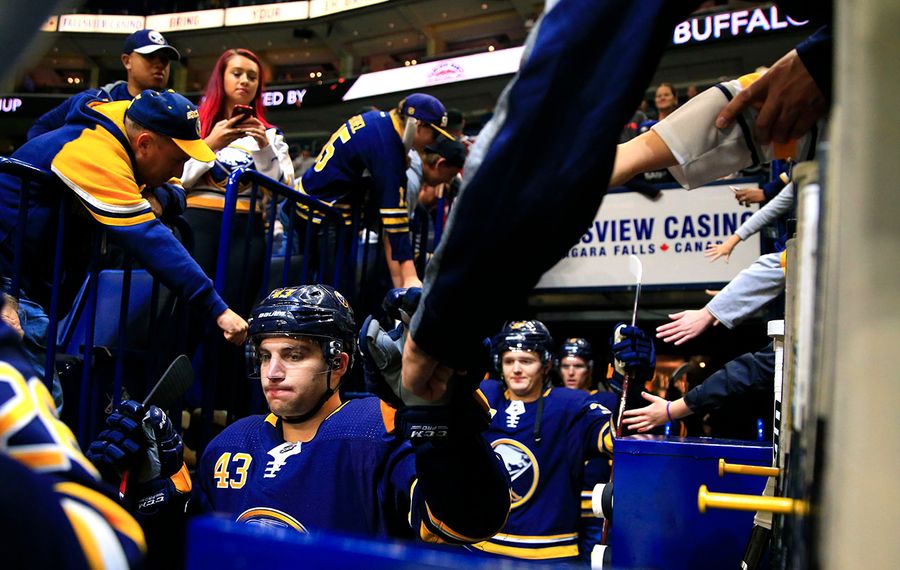 When Jason Botterill met with the media hours after the Buffalo Sabres announced a coaching change April 7, he shouldered some responsibility for the team's winning only 16 of its final 57 games.

"We didn’t put the proper roster out there," the Sabres' general manager said. "We didn’t give Phil enough players, enough tools to have success out there."

The Sabres have since signed Jeff Skinner to an eight-year, $72 million contract; acquired defensemen Colin Miller and Henri Jokiarjhu, as well as winger Jimmy Vesey, in three separate trades; and added winger Marcus Johansson on a two-year contract.

Each addresses a specific need for the Sabres; however, they now have a surplus at left wing and right-shot defense. Botterill is likely to trade from the latter to add talent at right wing or center, but who is the most likely to go?

Here is a look at the Sabres' organizational depth chart — listed by position, in no specific order — including every player either under an NHL contract with the team next season or restricted free agents who filed for salary arbitration.

What was once a position of weakness has become one of the Sabres' strengths. Skinner will likely play on the top line after scoring a team-high 40 goals last season and signing a long-term contract.

Johansson can be penciled into the second line after signing a two-year, $9 million contract this month — his ability to enter the offensive zone should buoy the performance of his linemates — and Vesey is capable of playing on any of the top three lines. However, their presence will likely bump Sheary to right wing and blocks Olofsson's path to a top-six role, though he too could move to his off side next season.

This is another position in which the Sabres have too many bottom-six options. Girgensons' impact as a penalty killer makes him the top candidate to secure a fourth-line role; however, don't count out Wilson, who was limited to 32 games between Buffalo and Rochester last season.

Smith is the wild card here since he would need to pass through waivers to be sent to Rochester, and the Sabres likely want to hold onto him. Ruotsalainen was an intriguing signing, but he will likely return to Finland for one more season. If Elie returns, it will be as a depth forward in the NHL or the Sabres will attempt to send him to Rochester.

Eichel appeared to be on the verge of a 100-point season until he suffered an upper-body injury in January, yet he still finished with 28 goals among 82 points in 77 games. The Sabres will expect him to take another step forward in his fifth NHL season.

The Sabres are in need of an upgrade at second-line center. Sure, they expect Mittelstadt to improve after his first full NHL season, but the 20-year-old won only 39 percent of his faceoffs as a rookie in 2018-19. He's likely better suited for a third-line role, where coach Ralph Krueger can try to protect Mittelstadt from taking defensive-zone faceoffs.

Botterill might face a logjam at center. After all, Sobotka is under contract for one more season at $3.5 million after he scored only five goals among 13 points in 69 games last season, and Rodrigues is a better fit at center because the team is set at left wing. Also, Larsson signed a one-year contract and will likely retain his role as fourth-line center.

Asplund, 21, would benefit from taking on a more prominent role in Rochester, while Dea will likely be one of the first forwards recalled if the Sabres are in need of a center or right wing.

Pekar, a fourth-round draft pick in 2018, will most likely need another season of junior hockey, though it's unclear if he will play center or left wing. He was drafted as a center and played the position with the Ontario Hockey League's Barrie Colts for 33 games last season, which was cut short by a broken collarbone.

This is another position in which the Sabres might need an upgrade, though it's important to note a left wing could move to his off side to address the need.

Reinhart, who scored 22 goals among 65 points last season, is likely to play on the second line after Botterill expressed confidence in the 23-year-old's ability to drive offense from the right wing. That could benefit Mittelstadt, if the Sabres choose to use him as their No. 2 option at center.

That would leave a significant hole on the first line. Thompson, 21, could be given an opportunity to play alongside Eichel, but Krueger might give Sheary and Olofsson a look there. Okposo can be counted on as the fourth-line right wing, a role in which he began to look comfortable in late last season.

Lazar is a long shot to break camp with the team, though he can also play center and will be given an opportunity to carve out a role after signing a one-way contract July 1. Oglevie, an intriguing signing as a college free agent out of Notre Dame in April 2018, will need to prove himself in Rochester after concussions limited him to 29 games there last season.

The Sabres are also well-stocked on the left side of the blue line, with Dahlin returning after his historic rookie season. He should step into a top-pairing role and quarterback the top power play. McCabe was on pace for a career offensive season until injuries limited him to 59 games, though he should be the team's top penalty killer from the left side.

Scandella had a disappointing season in which he was a minus-13 and contributed only 13 points in 63 games. He will be an unrestricted free agent next summer and could be a candidate to be traded before training camp. The same can be said for Hunwick, who played only 14 games last season and is owed $2.25 million in 2019-20.

Pilut, 23, underwent shoulder surgery this offseason, which will prevent him from being ready for the start of the season. He will likely rejoin the Sabres in either October or November, though he needs to improve defensively to avoid another stint in Rochester.

Though Gilmour is one season removed from playing 28 games with the New York Rangers, he's a long shot to make this team unless Scandella or Hunwick is traded before camp. Gilmour, 26, will likely join Bryson, and possibly Stephens, with the Amerks.

This depth chart should undergo drastic change in the coming weeks. It's likely safe to pencil in Miller, Montour and Jokiharju as the Sabres' top-three right-shot defensemen for 2019-20. All three were acquired by Botterill over a five-month span, and each should improve the Sabres' inability to exit their own zone.

Such a scenario would leave Ristolainen and Bogosian on the outside looking in. The former has been the subject of trade rumors for nearly five months, though there have been no substantiated reports connecting him to another team. Trading the 24-year-old could help the Sabres address their need at either center or right wing. Ristolainen's $5.4 million cap hit in each of the next three seasons makes him the most likely candidate to be traded next.

Bogosian, 28, underwent hip surgery this offseason that will prevent him from being ready for the start of the season, and he could surpass Jokiharju on the depth chart. However, other teams could be interested in Bogosian, who has only one year remaining on his contract with a cap hit of $5.142 million.

Nelson should serve as the Sabres' seventh defensemen, while Borgen and Fitzgerald could benefit from more time in Rochester.

Expect the Sabres to either split the goaltending duties between Hutton and Ullmark or take the hot-hand approach when picking the starter from game-to-game. Hutton, 33, is under contract for two more seasons and posted a .908 save percentage in a career-high 50 games in 2018-19.

Ullmark, meanwhile, had a .905 save percentage in 37 games. Botterill is hoping the addition of goaltending coach Mike Bales, as well as improved defense, will lead to more consistent results from the goaltending.

Hammond, 31, was signed to serve as the organization's No. 3 goalie. He will likely start in Rochester until Luukkonen is fully recovered from hip surgery and can contribute in the NHL if called upon.

It's unclear if Johansson will be ready to play in Rochester at the start of the season or if he will require more time to recover from the lower-body injury that cut his season short. He could also return to Cincinnati for a third consecutive season.