The night after he was beaten with batons and arrested at a mass protest in Kinshasa, the capital of the Democratic Republic of Congo, Junior was thrown into a jail for political prisoners.

There, a guard approached him.

"If you want to continue living, you’d better get out of this country,” Junior recalled the guard saying.

The guard let him escape.

Junior raced home to his wife and their young son, the beginning of a 16-month journey that would take the family across the world to Ecuador, north through Central America and eventually to Buffalo.

Junior, 35, who did not want his last name published because of the political situation in his home country, now stays at the Vive Shelter for asylum-seekers on Buffalo’s East Side. He is among more than 100 Congolese men, women and children who suddenly began arriving at the U.S.-Mexico border in Texas, were detained then released, and have made their way to Buffalo over the last few weeks.

Junior and his family arrived at Vive on June 12.

Sitting in an office at Vive, an old school building converted into a shelter, he agreed to share his story through a translator, Thomas Lynch, a longtime multilingual volunteer, and share photos he collected from the other Congolese at Vive.

“I’m open,” Junior said in French. “I’m down for giving you the details.” 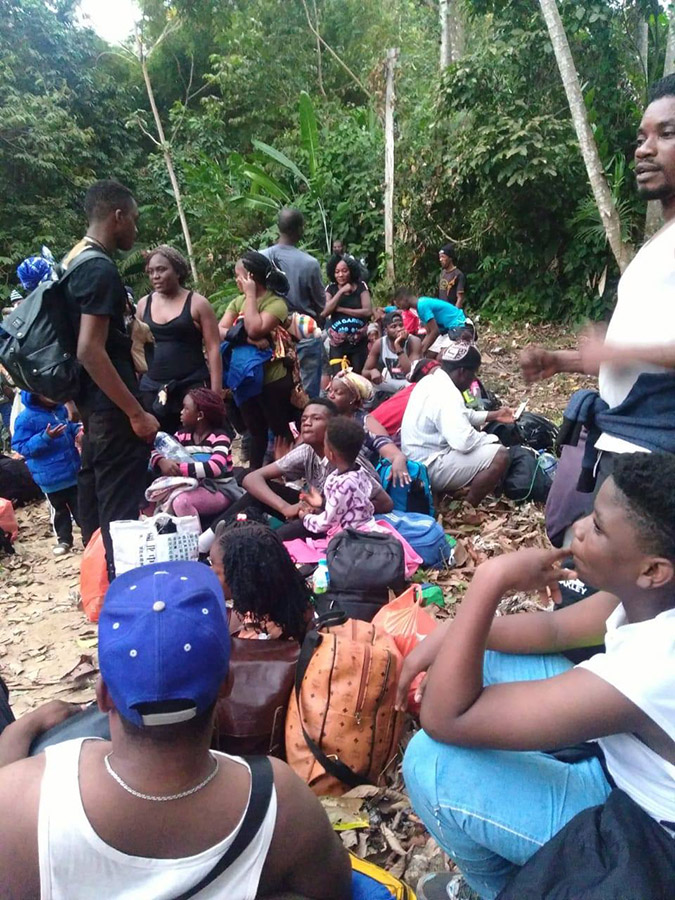 Congolese and other migrants trekked for days on foot through this huge swath of jungle-like land that straddles the Colombia-Panama border called the Darien Gap. (Courtesy of Vive Shelter)

Junior said he was born and raised in Kinshasa, where he worked in the currency exchange business and was also a pastor at a church.

Like many Congolese, he grew frustrated with the country’s president, Joseph Kabila, who was supposed to step down from office in 2016 but has refused, leading to widespread violence and turmoil.

Junior said he joined one of the demonstrations against Kabila on Feb. 25, 2018. At least two people were killed and many more injured as security forces confronted the demonstrators, according to a report by the news agency Reuters.

“They came in and grabbed up a bunch of people and brought them to the prison,” Junior said.

Junior recounted the warning from the guard who let him escape.

“If you get arrested again, you will be killed automatically,” the guard told Junior.

Junior went home to get his wife and son and a few personal belongings. Then they boarded a tiny boat to take them across the Congo River to the Republic of Congo, a separate country to the west.

Junior and his family stayed there for about six months, working odd jobs to raise money. All the while, they knew Kabila had henchmen there, too, and Junior and his wife decided to get farther away.

A friend helped connect them with the captain of a cargo ship who hid them in the lower decks of the vessel. Junior said he wasn’t sure where they would end up.

For 40 days, family stayed hidden in the bowels of the ship. The captain brought them food, usually little more than bread.

Eventually, they were dropped off at a port.

They disembarked but Junior wasn’t sure what to do. He found someone who spoke a little French.

“Guess what? You’re in Ecuador,” he told Junior.

Junior isn’t sure how the ship reached Ecuador, whether it went through the Panama Canal or all the way around the southern tip of South America.

For the first two nights, the family had nowhere to go, so they had no choice but to sleep on the streets.

On the third night, someone came by and pointed out a restaurant where they might be able to find work and even stay.

Junior’s wife asked the restaurant owner if she could help around the place and she ended up working there. She also made money doing people’s hair in cornrows.

They remained in Ecuador for about six months. All the while Junior knew he needed to find a place where his family could settle.

“We wanted to get someplace where we could stay and live,” Junior said.

On March 2, Junior, his wife and their 2-year-old son headed north. 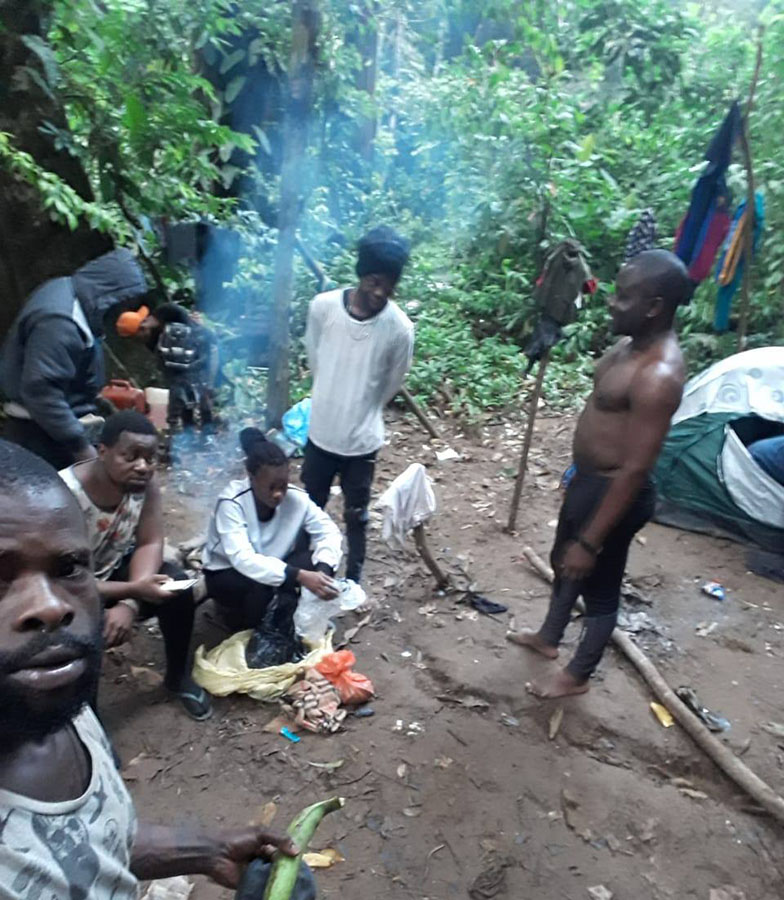 Congolese and other migrants trekked for days on foot through this huge swath of jungle-like land that straddles the Colombia-Panama border called the Darien Gap. (Courtesy of Vive Shelter)

First, they used what money they had saved in Ecuador to get through Colombia, which took several days.

Next came an area where they had no choice but to walk: a huge, swath of jungle-like land that straddles the Colombia-Panama border. There is no real road that goes through the Darien Gap — Junior called it “le foret” — the forest.

Travelers must rely on locals to help them navigate paths.

There were snakes everywhere and also bandits. At night they heard strange animal noises.

“You don’t really get a good sleep,” Junior said.

From Panama then traveled to Costa Rica, where they encountered immigration authorities who, Junior said, treated him and his family like they were “animals.”

“They would cover their noses, like we were stinky people contaminating their office,” Junior said.

In Nicaragua, border officials demanded $150 to enter the country. They didn’t have it, so Junior found work loading trucks for six days to pay the cost.

Throughout their journey they encountered other African migrants, some from Congo and the rest from other countries. Sometimes they traveled in groups. It was safer that way. But then they would split up. Many carried smartphones, a lifeline for them in many ways. It also provided a way to chronicle the journey. Junior said he and his wife had only a flip phone for their trip.

Honduras was next. Then Guatemala.

Junior recounted how villagers in Guatemala stared at him and his family, apparently stunned by their dark, black skin.

In Mexico, Junior says he was held at a detention center for six days, where he received little food.

Once released, he found that the people of Mexico were kind to him and other migrants, donating food, money and shelter.

Close to the U.S. border, Junior tried to earn money squeegee-ing cars. A man invited Junior and his family to stay on his property in a tent he provided.

In early June, Junior and his family surrendered themselves to U.S. authorities at the Texas border, announcing they were seeking asylum. They were detained and then released.

From San Antonio, Junior and his family took a bus to Buffalo. They are among more than 100 Congolese who have found their way from the southern border to Buffalo in recent weeks.

They are all in the process of seeking asylum.

Junior knows he is fortunate to have made it to the United States.

Among the other migrants he talked to, one man lost his wife and several other people said their children died during the journey.

“That’s something that the people of Buffalo need to know,” he said.