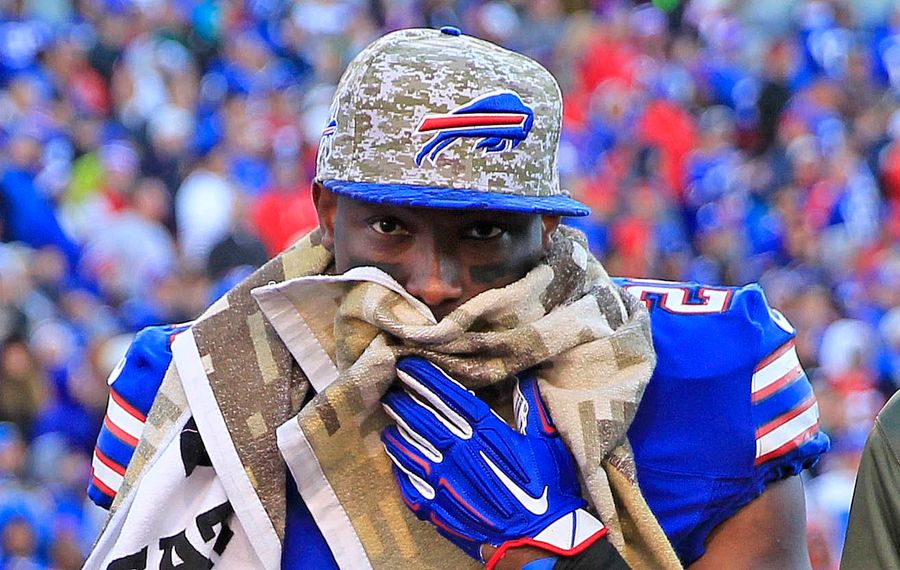 This is the third part of a series looking at 10 questions facing the Bills entering training camp, which begins July 25. Today’s question: Is LeSean McCoy still the man at running back?

Brandon Beane did his best to get out in front of the question before it even could be asked.

Minutes after the Buffalo Bills’ general manager selected Florida Atlantic running back Devin Singletary in the third round of April’s draft, he attempted to clarify something: The selection of Singletary did not change LeSean McCoy’s status with the team.

“LeSean McCoy is still here. Before you ask that question, he’s still the starter,” Beane said. “We roll the ball out, there’s no questions about that.”

Beane hasn’t changed his tune since then, but that has done little to douse the speculation about McCoy’s future. Until he’s lined up behind Josh Allen for the season opener Sept. 8 against the New York Jets, there is good reason to wonder just how long McCoy has left with the Bills.

There are multiple reasons that’s true. No. 1, McCoy makes a lot of money. Entering the final year of his contract, he’s scheduled to have the fourth-highest salary-cap charge on the team in 2019, at $9.05 million. Based on last year’s production, that qualifies him as overpaid. McCoy had the worst season of his nine-year career in 2018, finishing with 514 rushing yards on 161 carries, just 3.2 yards per rush. That was a continuation of a downward trajectory that started in 2017, when his yards per carry dropped to 4.0, down from a career-best 5.4 the year before.

The advanced stats didn’t paint a prettier picture. Analytics website Pro Football Focus uses an “elusive rating” that attempts to distill the success and impact of a runner with the ball independently of the blocking in front of him by looking at how hard he was to bring down. An elusive score is produced by dividing a player’s missed tackles forced by his designed run attempts plus receptions. That total is then multiped by his yards after contact per attempt. McCoy ranked just 23rd in the NFL in 2018, with a 27.8 score. McCoy also ranked 23rd in PFF’s “breakaway percentage,” which measures the highest (and lowest) percentage of a running back’s yardage coming on designed rushes of 15 yards or more. McCoy had just five such runs in 2018, producing 112 yards, 21.8 percent of his season total.

Boiled down, those fancy stats suggest two things: McCoy has lost a step and isn’t making as many defenders miss as he used to.

McCoy had the biggest salary-cap charge of any running back in the NFL in 2018 but finished 37th in the NFL in rushing. If the Bills move on from McCoy, either via trade or his release, the team would save $6.175 million – the amount of his base salary – leaving behind a manageable “dead money” cap hit of $2.875 million. Financially, the Bills are in good shape with the salary cap, both this year and in the immediate future, so money alone won’t be the determining factor in what happens with McCoy.

No. 2 is age. McCoy turned 31 on Friday. It is well documented what happens to NFL running backs on the wrong side of 30 – their production generally falls off a cliff. Just 25 players in league history have rushed for at least 1,000 yards in their age-31-or-later seasons.

No. 3 might be the most important reason McCoy’s role has been speculated on so much. It has to do with the roster depth behind him. In addition to Singletary, Beane added a pair of veteran free agents in 36-year-old Frank Gore and 25-year-old T.J. Yeldon. Gore, who signed a one-year deal, was brought in more for just his leadership in the locker room. He proved to be the Miami Dolphins’ best running back last year, starting all 14 games in which he played and finishing with 156 carries for 722 yards, an average of 4.6 yards per rush that was the best for Gore since 2012. Even if he’s not an every-down back anymore, the Bills clearly have a role in mind for Gore.

Yeldon, meanwhile, might not have lived up to his second-round draft status after four years with the Jacksonville Jaguars, but he has played meaningful snaps. He particularly impressed as a receiver, catching 171 passes in four years, including 55 last season. That’s an ideal skill for a third-down back.

Then there’s Singletary, who has coincidentally drawn pro comparisons to none other than McCoy. Taken with the 74th overall pick, the Bills think he has rare vision and instincts. If that’s the case, at some point soon he’s going to demand playing time.

Add in returning veteran Marcus Murphy and Senorise Perry, who was signed as an unrestricted free agent with an eye toward special teams, and the Bills have a surplus of running backs. With only six draft picks scheduled next year, a case could be made for trading one of them.

There’s no doubt the Bills could get by at the position without McCoy, but the question is whether they want to. The fact that they haven’t moved on from him yet – when there have been plenty of chances for them to do so – could be an indication.

Somewhat amazingly, McCoy is the second-longest tenured member of the Bills, behind only defensive end Jerry Hughes. They are two of only five players who predate coach Sean McDermott’s arrival in January 2017.

Of course, McCoy was coming off his best season with the Bills in 2016, so it made sense at the time to keep him around.

Last summer, the team elected to stand by McCoy when he was accused of domestic abuse in an explosive social-media post by an Instagram user claiming to be best friends with the running back’s ex-girlfriend, Delicia Cordon. Separate investigations by police in Georgia and the NFL remain ongoing, and to this point McCoy has not been formally charged with any crime. Nevertheless, the accusations have put the Bills in a spot where Beane and McDermott, who have talked in the past about the importance of character, have had to answer some serious questions.

LeSean McCoy's ex-girlfriend accuses him of physically abusing her

Cordon filed a lawsuit against McCoy last August, accusing him of abusing not only her, but also his young son and dog. Stephanie Maisonet, the mother of McCoy’s 6-year-old son, filed an affidavit supporting the child abuse claims made in the lawsuit.

McCoy has continually denied any wrongdoing, and the Bills have been content to let the court proceedings play out.

So why has the team been so loyal?

The simple answer is they believe in his talent. No running back in the NFL has rushed for more yards since McCoy came into the league in 2009. His 10,606 rushing yards are 299 more than Gore, his new teammate.

McDermott and offensive coordinator Brian Daboll have been consistent in saying that McCoy’s drop in production in 2018 can be attributed to multiple factors. In response, the team completely rebuilt its offensive line this offseason, signing six unrestricted free agents from other teams and drafting Cody Ford in the second round out of Oklahoma.

“We all didn't have the season we'd like to have, but we've kind of moved on from that,” Daboll said at the end of spring practices. “We've added some new pieces all around, not just in the running back room. Added some new players, some new coaches, so the job is going to be able to build chemistry and trust one another. … I feel good about LeSean, where he's at. He's had a good spring. He needs to have a good five or six weeks (before the start of training camp).”

McCoy kept a low profile during the spring but made it clear in his lone interview with The Buffalo News that there is no question in his mind about what his role in 2019 will be.

"In this league, in general, it's always competition. I'm a type of guy, I thrive off of having a big name,” he said. “So when guys come to my team, they're curious to see, 'How is LeSean McCoy? Is he still a good player?' I mean, I'm a dominant player. I think that speaks for itself. But I'll be in the same role as last year. And I look forward to putting some numbers up and bouncing back from that last season.”

If he has any of the same doubts or questions about what all the new additions to the team means for his status, he’s not saying so publicly.

"I play with confidence, so I don't let stuff like that move me,” he said. “The guys in the room, that's going to help us out. Like Frank, I'm sure, he'll help us out. He'll get some play, he'll make some plays. With the rookie, you know, we'll try to fit them in there. But I expect to be the main workhorse."

Until that proves to be the case in September, however, the question will continue to be asked.