Sure, consumers have more supermarkets to choose from as national food retailers such as Trader Joe's and Whole Foods have entered the market. And it's more convenient to pick up a loaf of bread now that dollar stores, gas stations, drug stores and big box discounters have gotten into the grocery game.

But what shoppers can't do is walk into CVS and grab a half gallon of Perry's Ice Cream, or log into the Shipt app and order Weber's mustard from Target.

The newest grocery venues are out of reach for many of Buffalo's homegrown favorites.

So how will local vendors weather the changes in the industry? How can such small, regional producers survive in a market dominated by national brands?

The locals go up against national manufacturers that pay big money for product placement. Every company wants to be on the store shelves that are at eye level, but locals are often relegated to the floor shelf that a quick moving customer is less likely to see.

The locals don't have the financial clout to get their products on end caps or have big sales promoted in a grocery chain's ads. Many of the national grocery chains that are more prominent here now don't make it a priority to play up local products in the same way as Tops Markets, Wegmans, Dash's Market and even Save A Lot.

Weber's mustard is so iconic in Western New York, stores risk customer ire if they don't carry it. But even when the tiny company can make its way into a Walmart or a BJ's, staying there isn't guaranteed. Doing business can be a struggle, and sales are not much to write home about.

The horseradish mustard, which has been a local staple since 1922, goes head-to-head on Walmart shelves with Heinz, French's and Grey Poupon. Kraft Heinz alone spent $584 million on advertising last year, according to market data company Statista. And Walmart takes pains to push its own Great Value store brand.

Even if Weber's doesn't get lost in the shuffle, it's likely to get passed over in favor of something cheaper. Though Weber's is priced at $2.42 for a 16-ounce jar, shoppers can grab a 20-ounce squeeze bottle of generic yellow mustard for 58 cents.

Weber's is one of the few local brands in Whole Foods, too, but it has moved just 60 cases there in the past 19 months.

Weber's big volume sales come from hometown chains like Dash's, Tops, Wegmans and Market in the Square, along with the mom-and-pop grocers that have done business with them for generations.

"I pride my business on the relationships we have with our smaller accounts – the Sloan Super Markets, the Hoelscher Meats," said Weber's CEO Steven Desmond. "You invest in small accounts and small accounts grow.'

Case in point: J. Mills Distributing Co. of Orchard Park. When it first started doing business with Weber's in 2001, it ordered about $200 in product every two weeks, Desmond said. Last year, J. Mills spent $23,000, or more than $880 every two weeks.

Weber's has also been picked up by U.S. Foods, which distributes to restaurants and cafeterias. Sales aren't dramatic – a couple dozen cases a month – but at least it opens the brand up to new customers. And it has made inroads with its lines of peppers, olives and relishes.

Still, Weber's is losing ground. It's flagship mustard is down 80,000 units over the past 22 years, as national accounts rebuff regional products and older, loyal customers pass away, Desmond said.

"I'm not picking on these nationals, but the point is, if you’re gonna come into our backyard, at least try to support our regional products," he said.

At the same time stores are squeezing out local vendors, retailers are focusing more on store brand products. Customers demand them, and grocers can make as much as 30 percent more on one of their own private label products than they can selling another brand, according to research company CB Insights. It's hard to compete with that.

When shelf space is limited and there is room for only one or two choices, it's likely the leading national brand and the store's comparable private label product will make the cut, leaving the regional product out of luck.

It also doesn't help that, all of a sudden, everyone is in the grocery business.

You've heard of a loss leader – a product that sells for less than it costs in order to attract customers who will buy more once they're inside. That's not far off from how some non-supermarket retail chains operate their grocery departments: Add groceries to your mix, advertise them to potential shoppers, and don't expect them to make much money.

Like loss leaders, grocery adds value in a different way. It increases foot traffic and entices shoppers to spend more per trip.

Grocery margins are notoriously thin. But as long as they get people through the door and boost sales in other aisles, big retail chains don't need to make high profits on food. This is especially the case in the digital era, when sales of everything from shoes to Christmas trees have migrated online. Roughly 95 percent of shoppers still like to buy their groceries in physical stores.

As a result, more retailers have added grocery departments over the past few years, or expanded and improved the ones they already had. That means you can find decent – and sometimes impressive – grocery offerings at dollar stores, pharmacies, gas stations and big-box discounters. Kohl's has even experimented with adding Aldi grocery stores to a few of its department store locations.

Building relationships like that with most other national retailers can be next to impossible for Buffalo's regional brands.

For one, they tend to communicate with distributors, not vendors. And the chains work with national suppliers, since it's easier and less expensive to carry all of the same products in every store.

Then there are the slotting fees – the money stores charge just to put products on their shelves – along with the promotional fees, advertising fees, stocking fees, paperwork. The national brands have much deeper pockets.

Local chains like Tops and Dash's, though, depend on local brands to differentiate themselves. While expectations aren't as high for local brands, those chains still promote them heavily.

"Someplace like Walmart is looking for a much higher rate of return. Our threshold is going to be lower, because supporting local brands is part of our go-to-market strategy," said Jeffrey Culhane, senior vice president of merchandising at Tops.

Save A Lot, which is headquartered in Missouri, has local franchisees. That means they have better knowledge of the Western New York market and work closely with small vendors.

"I do believe it sets us apart from some of the big corporate entities like Walmart and Aldi," Connelly said. 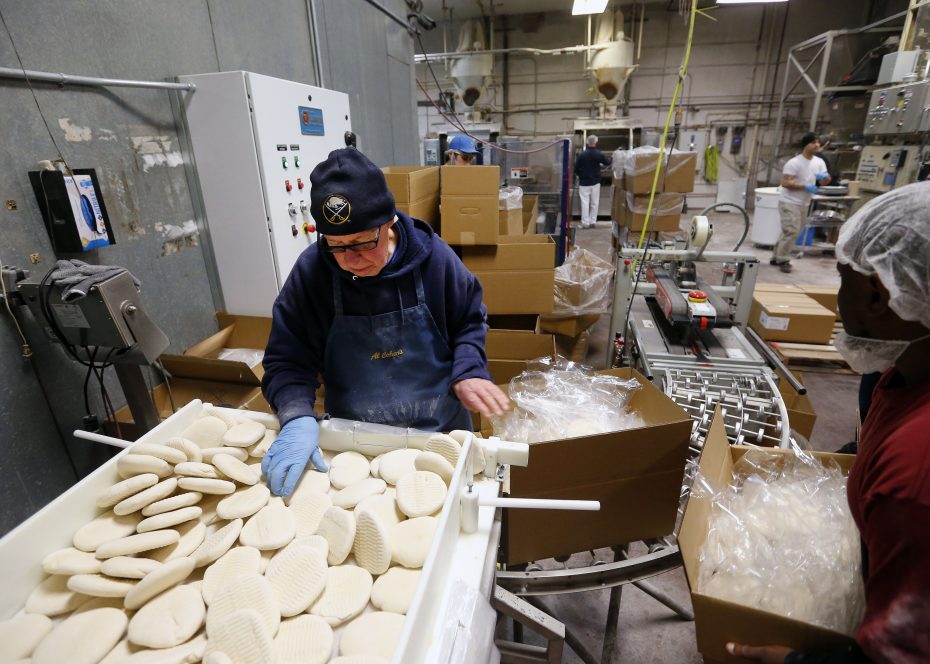 Al Cohen's rye bread has been around since 1888. Its products have been in Tops Markets since 1959. Mark DiDomenico, the company's owner, has known Joe Dash of Dash's Markets since 1979, back when DiDomenico was representing Thomas' English Muffins.

Business is robust, he said, and the company's private label frozen dough products are booming thanks to relationships like that. It's a different ballgame when dealing with the locals, he said.

"It's just like with the customers. Joe Dash is walking around the stores. Everybody knows him," DiDomenico said. "They have a problem with a steak, he takes care of it right there."

DiDomenico said he may have better luck placing products in national retailers' local stores, but notes the audience isn't quite the same.

"The Walmart customer is a value customer," he said. "They want a bucket of something for $5."

But, he reminds customers they have a lot of power if they use it. If a chain store doesn't have what they want, they should seek out a manager, give their name and number and request it.

"If that happened at Target, if everyone asked for Al Cohen, we would get in," he said.

Perry's Ice Cream has diversified over the years to keep the company strong and growing. What started as a tiny dairy in 1918 is now a global supplier and distributor, which had $112 million in revenues last year.

"When I started 38 years ago, we sold milk and ice cream," said Robert Denning, president and CEO of Perry's Ice Cream. "But we saw the landscape changing."

In addition to its Perry's products, it makes private label brands for other retailers, and also buys and resells national brands globally.

In light of that, it's not such a big deal that CVS doesn't carry Panda Paws.

Weber's Mustard, and fans of regional food, take a hit with loss of BJ's account