No online dating algorithm ever would have put Aaron and Casey together. He's a straight-arrow investment guy who goes to work in a suit and spends most nights alone; she's a free-spirited artist and "serial dater" who gravitates toward the kind of bad boys that inevitably let her down.

Fortunately for them (or not ....), friends and family see through their public profiles and fix them up anyway, and thus a fast-paced, profanely funny musical, "First Date," was born. The show is having its regional premiere this summer at MusicalFare, where a dynamite cast turns what could be a pretty predictable rom-com into an unrestrained romp.

The show's title may give the impression that this is yet another two-hander, a couple playing opposites against one another all night. It's not. These two have plenty of company, and what a crowd it is. Two other characters are "real life" -- a waiter and a best friend. The rest are intrusions of conscience who show up to comment on how the date is going or drop off emotional baggage that Aaron and Casey are carrying.

Marc Sacco is a perfect mess of twitchy nervousness as Aaron, an open book who is still recovering from being left at the altar more than a year earlier. Michele Marie Roberts as Casey makes the story work by keeping the brittle edges soft enough to make us believe there is a kind heart under the armor, which in this case is skin-tight leathers and black stiletto heels. As Aaron says in song, she has the kind of look that says "Hello world! I'm pissed!"

Aaron, on the other hand, is such a BDV (that's Casey-talk for blind date virgin) that he can't say two sentences without one of them being wrong. 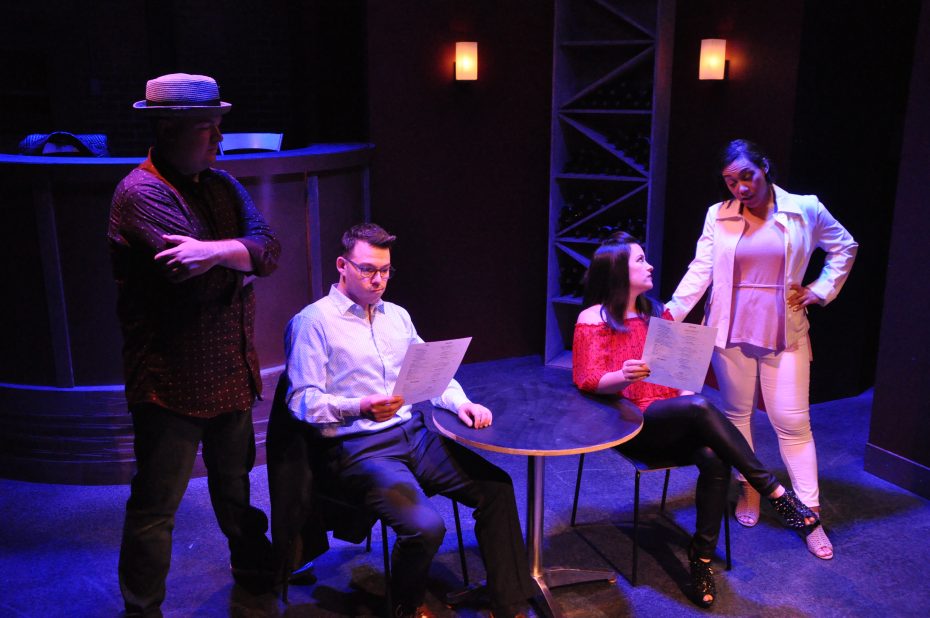 This mismatched back-and-forth could all get pretty tiresome were it not for Dominique Kempf, Dudney Joseph Jr. and Kevin Kennedy, who create an entire world around the dating duo. Joseph sets the mood from the start as the server who tries to loosen Aaron up before the date begins, his gestures saying even more than words.

Kennedy, a pretty normal-looking guy, goes into complete meltdown as a rescue-call friend who takes the task waaaaay too seriously. Kempf travels through generations as the various women in Aaron's life.

Melinda Miller
Teens and gal pals on stage, art at Hallwalls and UB, plus Stoogemania
At Kavinoky Theatre, a passionate, near-perfect 'Indecent'
A roundup of seven new theater offerings
Dances of spring, stoicism and wizards on screen
More Stories

Aaron and Casey need all the help they can get as they struggle to find the common ground that led their friends to put them together. How bad it is going? Well, at one point, in a song called "The Awkward Pause," we hear the lyrics  "I'd rather eat of plate of glass /if it would make this moment pass..."

The moments do pass quickly, though, with excellent direction and choreography by Doug Weyand. He and his cast give defining nuance to what could be purely cartoonish characters, and the singing is fine throughout. The pop-rock numbers by Alan Zachary and Michael Weiner (book is by Austin Winsberg) benefit from from their breeziness. Roberts is especially good in her heartfelt solo, "Safer," which peels back her defenses and shows the insecurities beneath.

Sometimes, however, the lyrics get lost in the musical numbers, which are backed by a live band off stage, and we have to mentally "fill in" when they get to the punchline. It doesn't detract, but is doesn't help.

There is a universal quality to Aaron and Casey's discomfort in making one another's acquaintance, even for those who aren't navigating the dating scene. Wrapping it in humor and sealing it with a kiss is a fun way to spend a summer night.

Presented through Aug. 11 by MusicalFare Theatre on the Daemen College campus, 4380 Main St., Amherst. Performances are at 7 p.m. Wednesdays and Thursdays, 7:30 p.m. Fridays, 3:30 and 7:30 p.m. Saturday and 2 p.m. Sundays. Tickets are $45, available online through musicalfare.com. Wednesdays include a post-show talk-back with the cast.