The pea-green soupy mix covers miles of shoreline in stench – and danger.

Wednesday, a patch of suspected toxic algae was found on the surface of open Lake Erie water less than 10 miles off the shore of Erie, Pa. If confirmed, it would be the closest documented occurrence of toxic blue-green algae in Lake Erie to Buffalo – a distance of just 70 miles.

"This patch isn't showing up on imagery yet," said Gail Hesse, the Great Lakes Water Program Director for the National Wildlife Federation, "but there are other more localized, smaller blooms."

Hazardous algal blooms are often associated with a potent cyanobacterial toxin called microcystin. Microcystin is a hepatoxin, neurotoxin and dermatoxin, which means it is toxic to the liver, the nervous system and the skin of humans and animals.

The bloom may have occurred when the lake water in that area warmed up and then went still over the last several days.

"We don't know whether there are any toxins associated with it," Hesse said. "You typically need concentrations of algae before we see any toxins."

Even so, it doesn't diminish the significance of the discovery.

"It's important we're vigilant in all parts of the lake," Hesse said.

In 2013, the microcystin toxin produced by cyanobacteria was located in an algal bloom in Presque Isle Bay in Erie, Pa.

Wednesday's discovery was made by George Bullerjahn, a Bowling Green State University biology professor who serves as the director of the National Institute of Environmental Health Sciences.

Bullerjahn's location was less than 15 miles from New York waters.

Toxic algal blooms are annual occurrences in the western basin of Lake Erie near Toledo. High nutrients combine with warm and shallow water during the summer months to make blooms likely in western Lake Erie.

Bullerjahn tweeted Wednesday that he obtained a sample from the area where the algae was found.

Hmmm... surface bloom of Microcystis at Erie lat/Lon 42.3, -80.0259. Wasn’t expecting it at the edge of the Erie Eastern basin. @planktonscience pic.twitter.com/ZishahEaOV

Results from the sample weren't immediately known Thursday. It also wasn't clear whether the patch of algae discovered by Bullerjahn detached from another patch elsewhere in Lake Erie or whether it cropped up in the open water on its own. 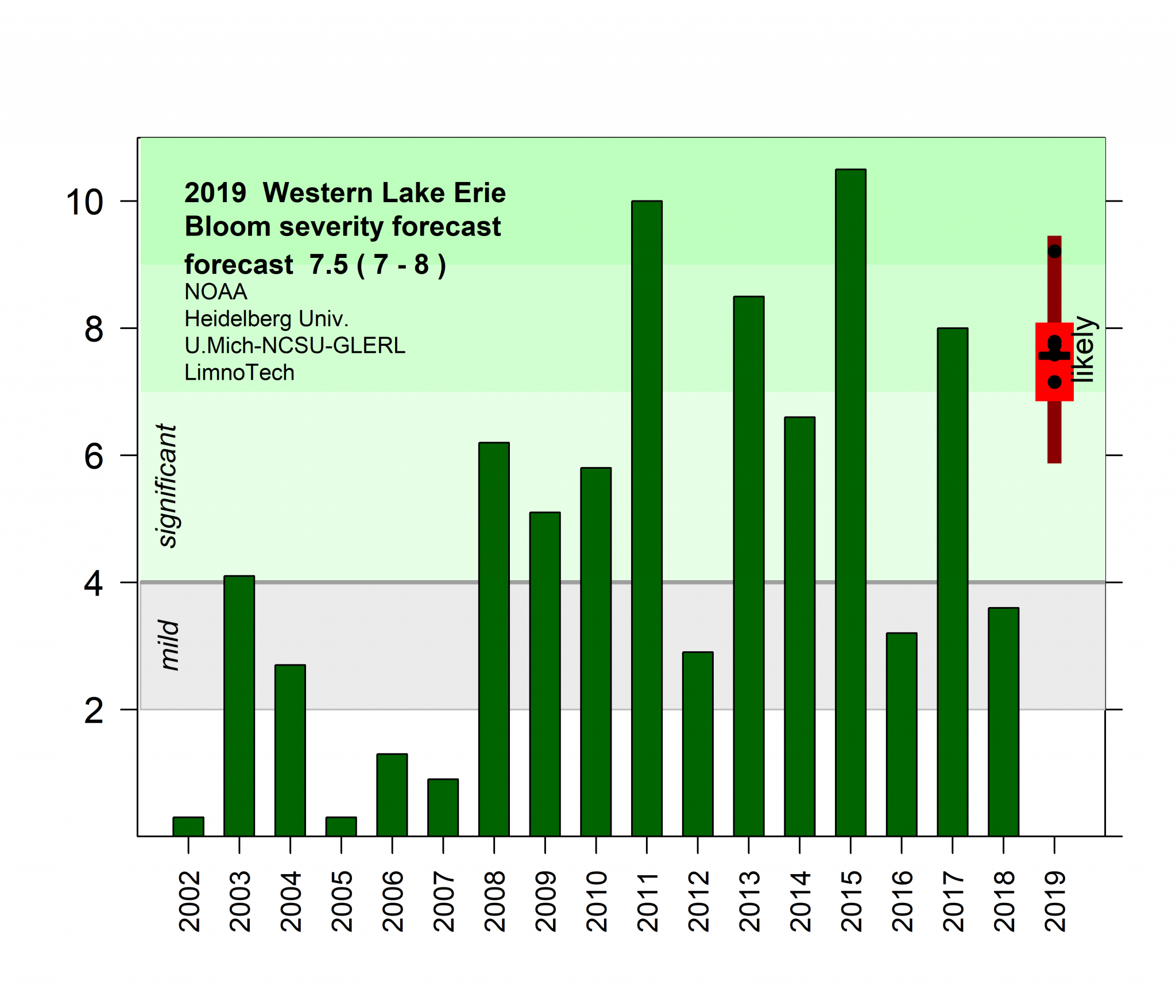 During a teleconference Thursday, Rick Stumpf of the National Oceanic and Atmospheric Administration announced that western Lake Erie was expected to have an above-average season for harmful algal blooms, according to the agency's 2019 forecast.

Federal forecasters used data from phosphorus inputs in the basin as well as seasonal precipitation and other parameters to model this year's forecast.

Models show this year's bloom is expected to be "significant" and in the top five largest blooms of any year since NOAA started forecasting them in 2002.

It could have been worse.

"We're not as bad as we could have been because of the amount of water flowing into the lake," Stumpf said. "There is a dilution factor with this."

That dilution factor includes larger inputs from low phosphorus waters upstream from Lake Huron. The regular, heavy rainfall in the highly-agricultural Maumee River watershed this spring also may have helped a bit, too, because it interrupted farmers' scheduled planting.

“This extremely wet spring has shed light on the movement of nutrients from the land into Lake Erie,” said Christopher Winslow, the director of Ohio Sea Grant and Stone Laboratory. “Despite the predicted size of this year’s bloom, portions of the lake will be algae-free during the bloom season."

Winslow said research into understanding bloom movement and how it produces toxins is ongoing. Those sorts of discoveries will be vital to protecting drinking water supplies.

In 2014, high concentrations of toxic algae inundated Toledo-area drinking water systems, resulting in their being shut down for several days.

No cases of toxic algae on New York's Lake Erie shoreline have yet been documented.

Toxic algal blooms are a persistent summertime problem in inland lakes in New York State, including Chautauqua Lake and around Allegany State Park.

The state Department of Environmental Conservation maintains a notifications page to keep the public updated about the presence of toxic algal blooms in those areas.