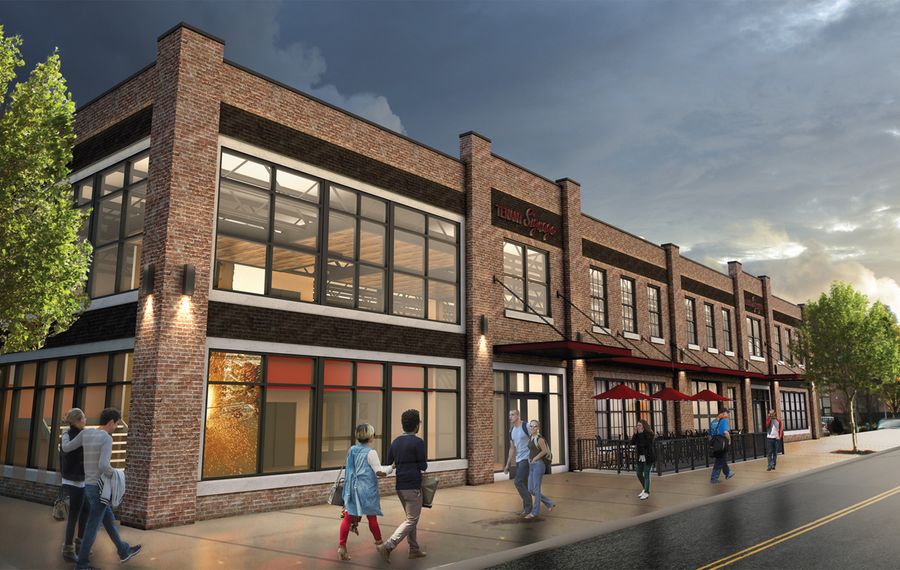 A new style of high-end coworking space is sweeping across the country, designed to provide more than just small offices, desks and some administrative support. And it could be coming to Western New York.

Instead of providing a temporary open tabletop for you and your laptop, it's more of a collaborative working community for entrepreneurs and small businesses — with a relaxed home-like atmosphere to encourage interaction.

There are shared sofas and couches, fitness facilities, food service, coffee bars and even kids' play areas, in some facilities. Reserved private offices and permanent desks are still an option for those who desire them. But so are "hot desks" that are available on a first-come, first-served basis.

And instead of fixed leases and contracts, the system relies on a membership-based model that allows users to come and go, even dropping in for just a day.

Such concepts are already the rage in New York City, Los Angeles, Denver, Boston, Washington and Chicago, and they are spreading to smaller cities like St. Louis, Cleveland, Austin, Nashville, Milwaukee and even Rochester.

But it's been much less visible in Buffalo, where the options so far have been mostly limited to the startup technology hubs at Innovation Center, 43North and Z80 Labs, and a couple of facilities with a very narrow focus. One such place, CoWork Buffalo, even closed late last year.

Now, Uniland Development Co. hopes to change that by year's end with what it calls "a bold new vision for Buffalo's business community."

The upscale model of co-working will be the centerpiece of the Amherst-based developer's latest urban project, at 505 Ellicott St., at the northern end of the central business district. That's where Uniland is converting a one-story, cement warehouse with 20,000 square feet of space into a new office environment that borders downtown Buffalo and the Buffalo Niagara Medical Campus.

"We’re pretty excited about the reuse of this, from an old abandoned warehouse to a modern office," said Uniland Vice President Carl Montante Jr.

It's part of a cluster of buildings and projects that the firm is redeveloping near the intersection of Ellicott and Tupper streets — mostly on the former Frey the Wheelman campus that the developer purchased in 2014. And it's within walking distance of the Innovation Center and other business incubators.

"We really don’t think there could be a more perfect location," Kane said. "Something like this is just going to add to the vibrancy."

The brightly lit design — with a brick facade, black accent banners, abundant windows and skylights — will include a new mezzanine level with an open central lobby and courtyard across both floors, as well as a corner retail space for a sandwich or coffee shop, for a new total of 35,000 square feet. It's designed to attract a variety of entrepreneurs, sole proprietors, small businesses, itinerant employees, contractors, established businesses and others who don't need or want permanent space, but are also looking for something more than a table at Tim Hortons or Spot Coffee.

"It might be fun to work from home or come to a coffee shop, but at some point it gets noisy and it’s not conducive to working," Kane said.

The facility will include closed private offices ranging from one- to two-person rooms, five-person team rooms, and even office suites that can handle up to 20 people. All will be fully furnished and outfitted, while the facility will have phones, copiers, scanners, printers, Internet access, mail and answering services, allowing the users to save administrative costs while focusing on running their businesses, Kane added.

There will also be common lounges and open kitchen areas, with couches, lounge chairs, floor lamps and other "resi-mercial" furniture, where people can gather together.

There also will be meeting rooms that can be used not only by members of the facility, but also by outside companies or groups who want to rent out a boardroom for an off-site meeting or daylong retreat — with catering.

"What we're really trying to do is offer variety," she said. "Maybe you work in your private office on something that is really focused and work intensive, but then to read a document, you go and sit on the couch and have a cup of coffee."

Uniland plans to have onsite staff serving as "concierge support" to arrange events and programming that fits the needs of members. That could include networking nights with investors, lessons on marketing and websites, or presentations by service providers about legal and human resource matters. Officials also hope to arrange for reciprocity with other coworking facilities around the country.

Membership rates are still being determined, but they will range from one-day passes or a 10-day "punch card" to longer-term plans for one or more months, a year or even longer. Users can quickly increase or decrease their space as needed, without having to pay well in advance.

"This is agile space," Kane said. "You only pay for what space you need."

The city has approved the overall project, which is expected to cost $7.88 million for the "core-and-shell" buildout, before the furniture. Uniland is seeking tax breaks from the Erie County Industrial Development Agency, along with property tax breaks through the city's more lucrative 485-a program, based on its inclusion of two apartments in the building.

That application is now pending before the agency's board, with a vote expected at the end of the month. If approved, construction and a pre-launch membership drive would start in August, with completion and opening by year's end.

The new co-working platform is the latest extension of Uniland's business, which traditionally focused on commercial office and industrial space but has expanded to include some retail and now even residential apartments, under its Glen brand. As with the latter, the co-working initiative will also be branded separately from Uniland, though officials said they're not concerned about clients' getting confused. Officials expect to announce the brand next month.