When does a runner-up finish in a golf tournament feel almost as good as a win?

When you start the final 18 seven strokes off the lead and shoot the round of your life to force a playoff.

It almost was a comeback for the ages. But Long Island’s Jennifer Rosenberg held on for the victory by making par to Dantonio’s bogey on the second playoff hole.

It was the biggest win in the career of Rosenberg, 19, who shot a final-round, 1-under 72. She and Dantonio finished at 2-under 217, nine shots clear of third place. Rosenberg just finished her sophomore year at Tulane University, where she was the No. 1 player on the team and earned All-American Athletic Conference honors.

“It’s a great honor to win this, and Chelsea did not make it easy,” Rosenberg said. “Sixty-five. Unreal. It was fun to watch.”

“I’m proud of myself,” Dantonio said. “The putter was hot. I stayed within myself and just stayed confident. I started to get a little scared at 6-under. But I was like – just keep doing what you’re doing.”

Dantonio just finished a superb four-year career at Winthrop University in South Carolina. She was the No. 1 player on the team, had two top-five collegiate finishes as a senior and ranked 50th in the nation in putts per round (34.11). She also was Academic All-America, with a 3.64 grade-point average as a health care administration major. 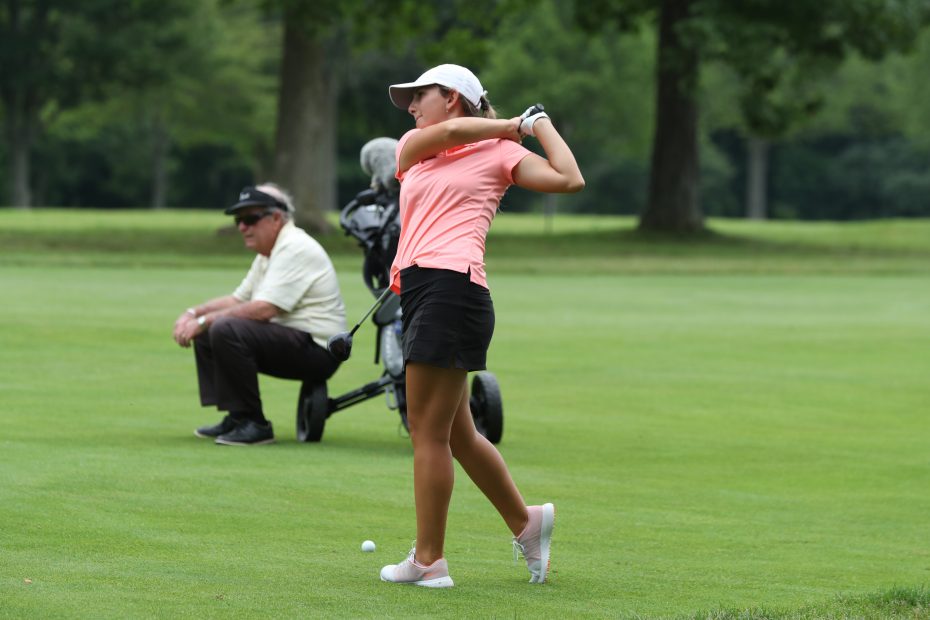 Dantonio was the clear underdog because she was giving up 40 yards to Rosenberg with the driver. Rosenberg has LPGA Tour-caliber length, routinely driving it 280 yards. Rosenberg drove the green on the 292-yard third hole, hitting it to 8 feet and two-putting for birdie. At that point her lead was eight shots.

The 5-3 Dantonio drives it 235 to 240, but she hits it straight. She has a supple, free-flowing swing with superb tempo. She also has a great hands around the green.

Dantonio chipped in from 35 feet for birdie on the 6th and made four straight birdies on Nos. 9 to 12 with deft wedge-shot approaches that kept the ball below the hole. The birdie putts were from 6, 10, 5 and 11 feet. All of a sudden, she was tied for the lead.

“She’s always had good touch around the greens,” said Dantonio’s instructor, former PGA Tour player Allen Miller, who served as her caddie Thursday. “She hits it straight and she’s determined. She never gives up. That’s what I’ve seen in her all along. She never pouts much. She’s had that work ethic for a long time.”

Rosenberg used a 285-yard drive to birdie the par-4 13th and regain the lead. On the par-5 16th, after hitting a bunker shot a tad heavy, Dantonio drained an are-you-kidding-me 36-footer for birdie to tie again at 2-under.

“At that point I was cheering on for her,” Rosenberg said. “She played amazing.”

On the first playoff hole (the 321-yard 18th), Dantonio hit her approach to 5 feet but missed the putt. Rosenberg pulled her approach left, 9 yards from the pin, with a downhill lie in the rough, downhill to the pin. She was staring at bogey. She almost holed it.

“I knew the greens are so fast and I knew I needed to barely hit it,” Rosenberg said. “I opened the clubface and hit a flop shot real soft. I hit it perfectly, it landed soft, and I thought it was going in.”

That saved the title for Rosenberg, because on the second playoff hole (the 18th again), Dantonio hit her approach 2 yards over the green and made bogey.

“My putting was really rough,” Rosenberg said. “It was stressful at the end but I kept my cool and stuck with my game plan.”

Dantonio, runner-up in the event last year by 7 shots, was bidding to become just the seventh Buffalo district woman to win the state title and the first since Williamsville’s Rene Sobolewski in 2010.

Dantonio, who plays out of Crag Burn, plans to remain an amateur for the next nine to 12 months while she works with Miller to tighten her swing and gain length off the tee. Then the plan is she will turn pro.

“I’ve been wanting to take my game to the next level,” Dantonio said. “That’s what I’m working on right now. In order to do that, I need to make some swing changes. This gives me that confidence boost.”

Placing third over the 6,004-yard layout was Alexis Hios of Westchester CC at 7-over. Lewiston’s Maren Cipolla was fourth at 8-over. Cipolla, who plays out of Park CC, just finished her senior season at the University of Texas, which finished the regular season No. 2 in the nation and lost in the NCAA quarterfinals. Orchard Park’s Sydney Shaw placed 10th.

Rochester’s Jenna Hoecker captured the Mid-Amateur (25 and over) title for the second straight year by finishing 6-over. Hoecker, who won by 11, played at Stetson University. Her father, Jon, is the long-time pro at Brook-Lea CC.