Fourteen months after a Lockport man accused Monsignor John M. Ryan of molesting him in the 1980s, Bishop Richard J. Malone has yet to decide whether Ryan committed the abuse and should be further punished.

The man's May 8, 2018 application to a Buffalo Diocese program that compensates victims of clergy abuse prompted Malone to suspend Ryan, 89, last July from publicly celebrating Masses and other priestly functions.

This past May, the diocese received a second complaint about Ryan from a Pennsylvania woman who said the former superintendent of Catholic schools repeatedly molested her in the late 1950s when she was a parishioner at Queen of Heaven Church in West Seneca. Her lawyer notified the diocese in a letter.

Both accusers said they plan to sue the diocese in August under the Child Victims Act, which allows a one-year window for childhood sex abuse victims to pursue civil cases from years ago that were time-barred under statutes of limitations.

Ryan served as superintendent of Catholic schools from 1975 to 1981, overseeing more than 42,000 students in about 150 elementary and high schools in eight counties at the time.

Ryan, who remains on administrative leave, declined to comment when contacted by phone. 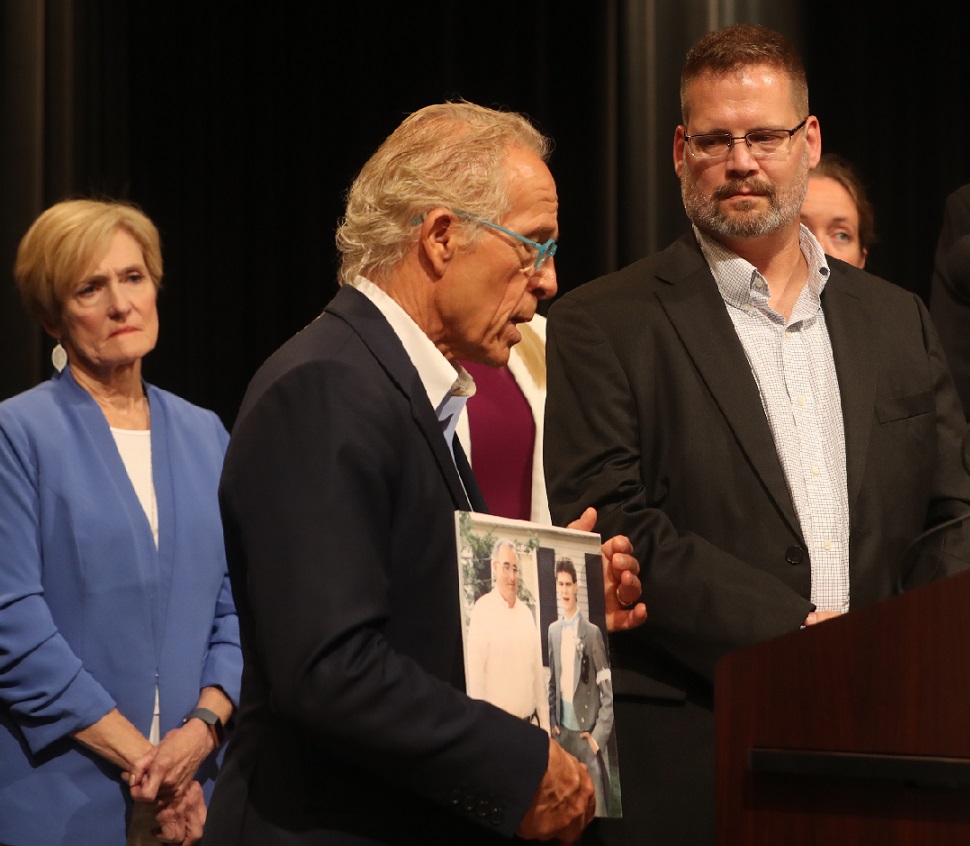 Ann Fossler, on left, has accused Monsignor John M. Ryan of molesting her in the late 1950s when she was 6 to 11 years old and a parishioner at Queen of Heaven Church in West Seneca. She was at a recent news conference held by James Bottlinger, on right, who accused the Rev. Michael Freeman of sexually abusing him. (John Hickey/Buffalo News)

“I’m not going to say anything. I’m just waiting for what I’m sure will be a positive result from the board. That’s all I have to say,” he said before hanging up.

Ryan was referring to the diocese’s review board, a group of lay Catholics that reviews investigations into allegations of abuse and advises the bishop on whether a priest should be allowed to return to ministry or be removed permanently.

The board is scheduled to consider Ryan’s case on July 24.

But a former assistant district attorney who was hired by the diocese to investigate claims of childhood sex abuse has yet to interview either of Ryan’s accusers.

Personius blamed attorney J. Michael Reck for the holdup, saying Reck refused to allow his client to speak with the investigator, Scott Riordan.

"It's so difficult for the party who's accused to defend himself when a lawyer refuses to engage in the most fundamental procedures for investigating whether or not in fact it occurred and he's accusing the right person. That's what's going on here, and it's just not fair," said Personius.

Ryan retired in 2001 from being a full-time pastor and lives in a diocese residence for retired priests. Most retired priests continue to assist with Masses at area parishes, but it’s not clear how active Ryan was at the time of his suspension.

A total of 19 priests have been suspended from ministry since March 2018 due to sexual abuse or misconduct allegations. In addition to Ryan, four other retired priests remain on administrative leave as the diocese continues to investigate them.

Malone has cleared eight of the priests of sex abuse and reinstated them. Accusations against seven of the 19 priests were determined to be credible and forwarded on to the Vatican for further review.

The diocese since March 2018 has also identified 78 other priests credibly accused of sexual misconduct with minors. They had been previously removed from ministry or are dead.

The Lockport man, who is 43, has talked to the FBI about his alleged abuse. He agreed to an interview with The Buffalo News on the condition that his name not be used in a story.

The married father of three children said he served as an altar boy when Ryan was pastor of St. Benedict in Amherst. The man said he was 11 or 12 when the abuse started.

On breaks from school and during the summer, Ryan regularly drove him home from Masses and fondled him in the car, the man said. Ryan sometimes stopped the car at a park near Windermere School, he said.

“It was random, and it was based upon opportunity, and it wasn’t even every time,” he said. "It was numerous times, and I knew at the moment it was wrong, but at the same time, I didn't do anything to stop it. It was a shock: 'What the heck is going on here?' "

The former altar boy said Ryan never threatened him, but “he was a very intimidating man to a kid.”

The abuse, he said, has affected him his entire life. He said he "missed a ton of school" in sixth and seventh grades due to illness.

"I was basically a nervous wreck all the time," he said.

In eighth grade, he asked his parents if he could stop being an altar boy.

He said he never told his parents, who are now deceased, about the abuse and didn’t reveal it to anyone until talking in 2014 with a therapist who diagnosed him with complex post-traumatic stress disorder.

He was more than willing to speak with Riordan after he filed his complaint last year but heard nothing for nearly three months, he said. He then was shocked to see Ryan’s photograph on a local television newscast when the priest was suspended.

The man said he was further soured by the diocese’s initial outreach to him, which was to ask if he was sure he had identified the right man as the culprit.

“To a survivor coming forward and talking about the most traumatic event in their life, that’s just plain wrong, and it’s callous,” said Reck. "It smacks of a cover-up. It smacks of a deflection. It smacks of them trying to protect a sitting priest."

The man said he was certain Ryan was the priest who abused him.

“Right then and there I was thinking, this is just not going to go well,” he said.

Reck wrote to the diocese on May 29 to let them know he was representing a second person who accused Ryan of abuse, Ann Fossler, 68, of Landenberg, Pa.

Fossler and the Lockport man weren’t aware of each other at the time they accused Ryan and they still have not met or talked with each other. But both of them said in separate interviews with The News that the molestations happened while they were in a car with Ryan.

Ryan was associate pastor of Queen of Heaven when Fossler said he befriended her large and devout Catholic family.

“Our whole family life revolved around the church. I don’t even know how to describe it beyond keeping the faith was like the primary family message,” said Fossler, who was Ann Marie Mahoney as a child.

An older brother went to minor seminary and a sister was in a convent for a while, she said. Her parents adored priests and, in particular, Ryan, who was highly educated and worldly, she said.

They had no qualms about allowing Ryan alone with their daughter, including on car rides to a cabin that they helped build for the priest in Bliss, Wyoming County, she said.

“It was nothing they would question. In those days, nobody knew any of this stuff, and I didn’t say anything to them,” said Fossler. 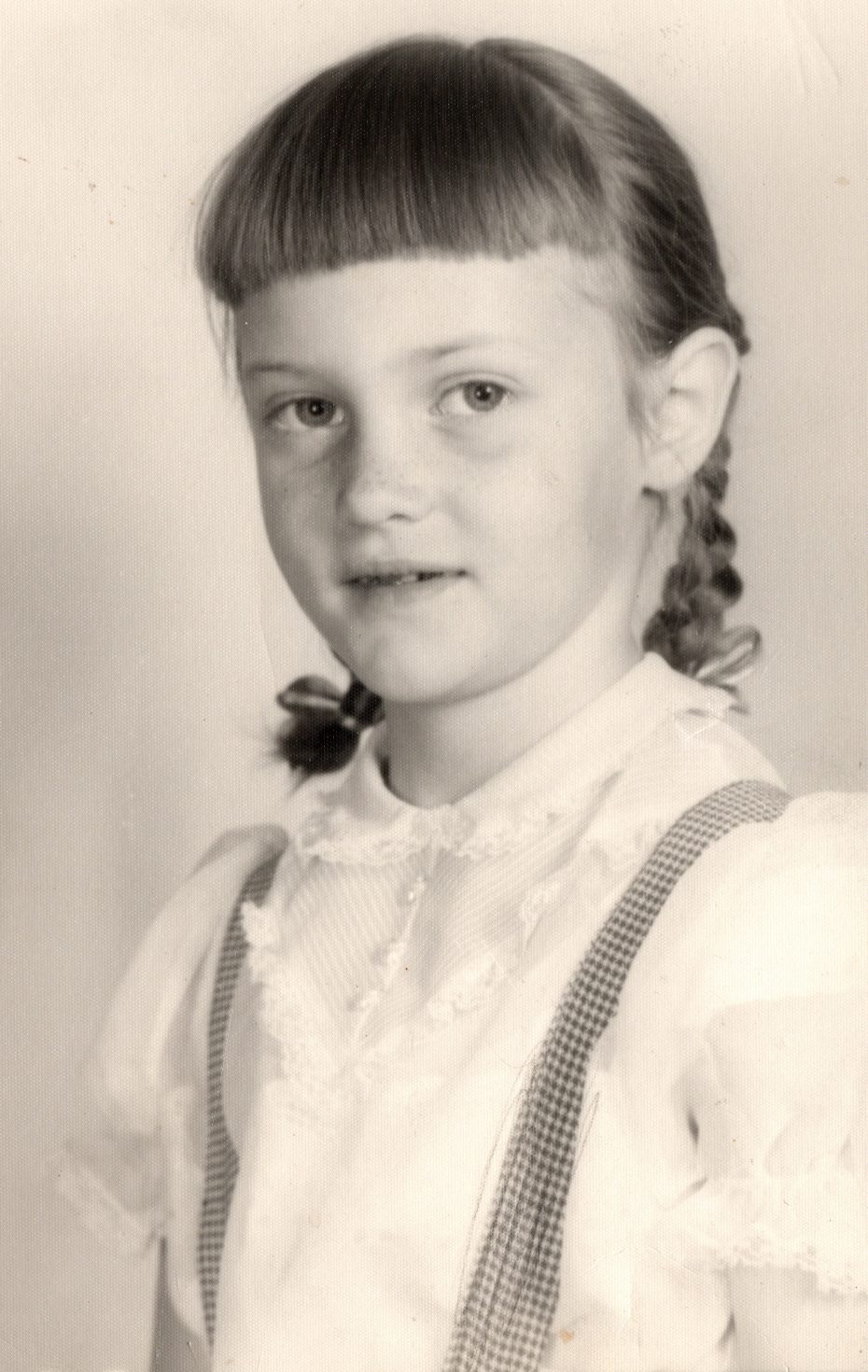 Ann Fossler, in a photo from first grade, when she was known as Ann Marie Mahoney. (Courtesy of Ann Fossler)

Ryan molested her from approximately age 6 to age 11 in the car and at the cabin, she said.

The abuse ended when Ryan was assigned to another parish, she said.

Fossler kept quiet about it for decades because she said it would have devastated her parents. She even invited Ryan to preside at her wedding and baptize her daughter, she said.

She broke the silence in the early 1980s by confiding in a counselor and eventually told a sister, she said.

She said she never revealed anything about the abuse to her parents, who are now deceased.

Fossler said she was coming forward now because the church has covered up the abuses of priests for too long.

“It’s like a fungus that grows in the dark,” she said.

Personius said Ryan acknowledged that he was close with the Mahoney family and sometimes took parishioners to his cabin in Bliss, but not for overnight stays, said Personius.

He said Ryan doesn't recall taking Fossler in his car to the cabin.

"He can't deny that. He can't recall it, but he's not going to say it never happened because he just doesn't remember," said Personius. "Of course, he flatly denies her allegation there was some type of abusive behavior on his part."

Personius also questioned why Fossler years after the alleged abuse would choose Ryan to perform her wedding ceremony and baptize her child.

"It just doesn't make any sense," he said. "There's substantial, very concrete issues that surround both claims and raise serious doubts as to their veracity."

Riordan asked Reck for the first time on Monday if he could speak with Fossler.

Riordan told The News that the Ryan investigation is “still open and active” and that he was trying to complete it as soon as possible.

He said he made “numerous attempts” to speak with the man who initially reported an allegation through the compensation program.

Riordan said he had few details about the alleged abuse with which to confront Ryan, who “flat-out denied” abusing any children.

“He said, ‘I never touched anybody, and they have the wrong person,’ ” said Riordan.

Ryan also told the investigator that he didn’t drive kids home in his car, and that there was another priest in the parish at the time who was known to do so.

Riordan, a former assistant district attorney who prosecuted sex crimes, was hired by the diocese to investigate allegations of childhood sex abuse against clergy. After he completes an investigation, he presents his findings to the review board, which votes on whether a claim has been substantiated and makes a recommendation to the bishop to return a priest to active ministry or continue the suspension and forward the case to the Vatican for a final adjudication.

Riordan said he hopes to talk to the second accuser before the review board meets July 24.

“I want to get it right. I want the truth to come out,” he said.