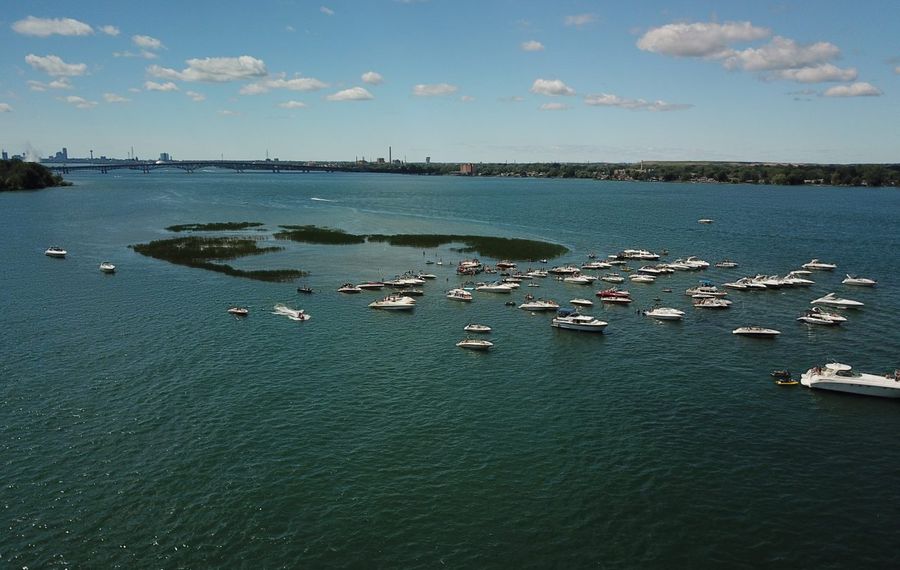 Every summer weekend, a few dozen boaters and Jet Skiers converge on a slice of a Niagara River sandbar and shallow water known as Grass Island.

It’s a Grand Island party spot. Some stop to enjoy drinks and hang out with friends. There’s swimming, music and even grills set up on stilts right in the water.

But Grass Island is slowly slipping beneath the surface of the Niagara River.

The island has dwindled from a narrow upland island about 500 feet north of Buckhorn Island State Park into a lobster-shaped area just a fraction of its size due to erosion resulting from natural and human causes.

The New York State Office of Parks, Recreation and Historic Preservation plans to curb further deterioration by restoring habitat on the island.

That could restrict boating, Jet Skiing and other recreation activities in a spot that has long been a popular hangout for water enthusiasts on hot summer days due to its shallow sandbar and relative protection from the swift current of the Niagara River.

For boaters who frequent the area, those restrictions are unlikely to happen without a fight. Among their many reasons are public access to a long-popular recreation spot and safety concerns.

“We are very much against it, and we are prepared to go to court,” said Bill Fortier, who founded the Niagara River Recreational Community to keep Grass Island fully accessible to boaters. “I told them directly, we were going to fight this tooth and nail. They said they were going to work on a compromise.”

That compromise may be coming on Tuesday, state parks officials confirmed to The Buffalo News last week.

Details won’t be known until then. What is known is that any restoration work won’t have an impact on this summer’s boating season, according to a memo from Grand Island Town Councilman Michael Madigan following a meeting between state parks officials and Grand Island town officials last month.

Madigan’s memo said: “The originally planned September 2019 construction start date is likely delayed as a result of reviewing options that ‘could be considered a compromise’ for the recreational boating community.”

Madigan also noted that delay likely means construction wouldn’t begin until at least Aug. 15, 2020, because it’s prohibited until this date in order to protect the habitat and to avoid disturbances to areas where fish spawn and nest.

The others include restorations at East River Marsh, Burnt Ship Creek and the Buckhorn Island Shoreline. 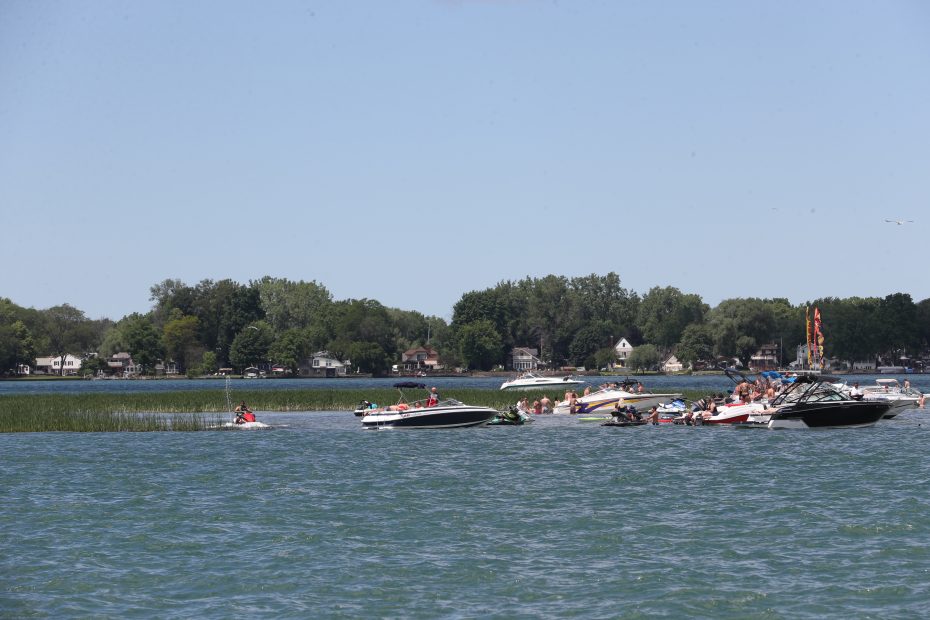 Grass Island is a state-regulated wetland in an area that’s classified by the U.S. Environmental Protection Agency as an “area of concern.”

It provides spawning and nursery habitat for fish like the muskellunge and northern pike and provides feeding and nesting habitat for the pied-billed grebe, which is listed by the state as a “threatened species,” state parks officials said.

The island also serves as a habitat for other waterfowl and as a nighttime roosting area for purple martins during their migration from the tropics.

Look at an aerial photo and it’s easy to see how the shallows at Grass Island are being affected by watercraft. 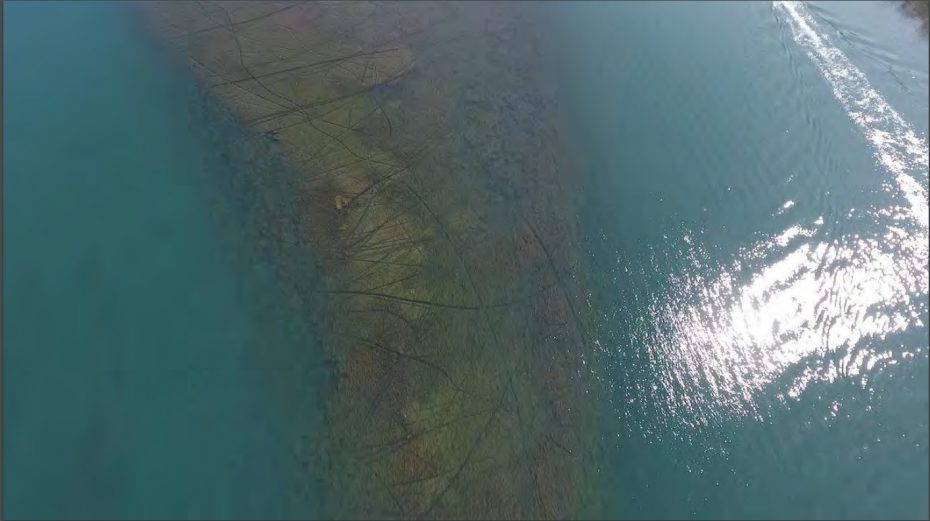 Scars left behind by watercraft in submerged areas of Grass Island in the Niagara River. (Image courtesy of the NYS Office of Parks, Recreation & Historic Preservation)

Lines left behind, likely from passing boats and Jet Skis, etch the shallows in a zigzag fashion. It’s why plans include protecting the island and the shallows around it.

The state parks’ early habitat restoration concept called for an installation of rock reefs on the northern and eastern sides of the island and the addition of emergent and submerged plants and root wads inside the newly created coves.

“A goal of the project is to protect and restore habitat for fish and wildlife,” state parks said in a statement.

Some of the emergent vegetation could include cattail and bur-reed. Bird species would likely use that for cover and nesting. Submerged plants like wild celery would aid in covering young fish and enhance feeding areas for waterfowl, birds and fish. And the tree root wads could secure the construction work and add to the habitat at Grass Island. The rock reefs would surround the habitat that’s built and protect it from natural and human threats, state parks said.

Fortier said any habitat that exists in the upland areas now was man-made. He noted in a letter to state parks officials that what’s known as Grass Island today was historically a sunken sandbar. It was river dredging dropped there during the construction of the Niagara Power Project that created shallows enough to spawn vegetation there.

“If river-dredging sand was not deposited there by man, it would probably, to this day, be just a sandbar,” Fortier wrote.

Some restrictions within the Grass Island wetland area are already in place under regulation by the state Department of Environmental Conservation, the DEC said. The wetland area is considered critical habitat for the Niagara River’s fish, waterfowl and birds. It’s already made up of some vegetation like eelgrass and cattails.

“To minimize disturbances to ecologically significant areas, DEC prohibits access to certain parts of the island, which has aided ongoing restoration efforts,” the DEC said.

State parks crafted another draft of its habitat restoration plan – believed to be a compromise plan – that it intends to share Tuesday. Whether it will be enough to mollify Fortier, or the people who have already signed his petition at Change.org, remains to be seen.

“If they want to compromise boaters a bit, there’s going to be a fight,” Fortier said.

Ask anyone on Grand Island, and they can tell you about the battle that’s been brewing for control of Grass Island.

Some favor nature and restoring vital ecosystem and habitat in the Niagara River that has been lost to a century of degradation. Others support keeping it open for recreation, saying they have already been pushed off of other spots in the river like Strawberry Island.

Bridging that gap could be more difficult than getting the tollbooths to Grand Island removed.

“With the right plans, I think it is something where people can peacefully coexist,” Witt said. “From an environmental standpoint, I guess they’re trying to claim wildlife habitat and what have you. But there are plenty of places for that.”

Witt pointed to recent shoreline and habitat restoration work that is already done or underway in the upper Niagara River. Besides Strawberry Island, the New York Power Authority – in conjunction with the DEC and other organizations – has shored up and rebuilt habitat at Motor Island, Beaver Island and the newly created habitat archipelago some still refer to as Frog Island.

Witt called Grass Island a unique place in the river because of its shallow sandbar and bottom where you can get out of your boat and stand in the water.

Take that away, some said there could be other environmental costs.

“They have places to go, but you’re going to use a lot more gas to get there,” said Lawrence Schupp of Grand Island.

Fortier collected nearly 1,500 signatures on an online petition as of Friday afternoon supporting boaters’ position on the issue against the state’s plan. He also maintains a Facebook page dedicated to Grass Island where boaters frequently post photos of the fun and revelry they enjoy on the island.

The state has used some of that information in their own informational slides as evidence of why the integrity of the island’s ecosystem must be protected.

“If you take that away from the people who party there, people aren’t going to be happy,” Stephan said.