Bill Dixon didn’t know that Rashad Evans would become one of the most fearsome mixed martial artists of his generation, that this poor kid from Niagara Falls would rise from his junior high gym class to the Ultimate Fighting Championship light heavyweight title.

He didn’t know that Evans would captain the wrestling team at Michigan State and earn two black belts and land his big break on reality TV. Or that Evans would win his first 10 professional fights and run his record to 19-8-1, triumphing against a collection of MMA’s grandest stars: Michael Bisping and Chuck Liddell and Forrest Griffin and Tito Ortiz. Or that Evans’ name will forever join theirs Friday, when the 39-year-old is inducted into the UFC Hall of Fame.

At the beginning, Dixon knew just two things about Evans, both stemming from what he had witnessed in school one afternoon. The first was that this seventh-grader with no wrestling experience had soundly beaten a classmate who’d been training since he was 5.

The second was that he needed this kid on his team.

“Where most people would be like, ‘This kid’s trouble or not worth the time,’ my dad saw differently,” said Bill Dixon Jr., “and really made sure he didn’t go down the wrong path, which he easily could have.”

The Niagara Wheatfield High School wrestling coach had a keen sense of legacy.

Dixon had seen one develop up close for years, while wrestling for and later serving as an assistant alongside his predecessor, Armand Cacciatore, who founded the Falcons’ wrestling program in the early 1960s and coached it into a regional powerhouse.

A sense of tradition also resonated throughout his family. Dixon had four boys – Bill Jr., Brad and twins Dan and Dave – all of whom wrestled. And Dixon, sensing talent, also took a special interest in Evans, one of seven children raised by a single mother. He wasn’t the easiest kid.

“I had a lot of issues to work through, and it stemmed from my upbringing,” Evans said. “I didn’t grow up with my father in my life, and that bred a resentment in me, and it bred a mentality in me that made me very angry.

“And then on top of that, growing up, we struggled financially, so I had that as a stress. And then I was going to a school where everyone, for the most part, they were financially in a lot better place than I was, so I got to see every single day what I didn’t have. And that breeds something in your mentality. ‘Why does this person get this? Why don’t I have this?’ You know what I’m saying?

That didn’t mean Evans was eager for guidance or wanted to wrestle.

And besides, he wanted to play pro football. Evans was a strong safety and running back as a kid.

He didn’t know that Dixon ran an end-around.

Cacciatore, by that point serving only as the school’s football coach, told Evans that all the best football players wrestled.

“And he got me with that,” Evans said, laughing.

Cacciatore is four months removed from quadruple bypass surgery, but last week found the strength to climb the stage and speak at an after-school ceremony in the auditorium at Niagara Wheatfield, where the wrestling room was being named in his honor.

The 84-year-old has been inducted into eight halls of fame, including the one around the corner at the school, just outside the cafeteria, where a grid of transparent plaques augment the windows overlooking a courtyard.

Cacciatore is introduced as more than 120 people clap and rise from their seats. Nearly a third are his former athletes, whom he’ll ask to join him in the front of the room, after thanking the Lord and the award committee.

Hours later, once the crowd had thinned to a few family members and close friends, Cacciatore mulled his accolades and grew pensive.

“I didn’t care about anything for me. It was all for the kids,” Cacciatore said. He began to weep.

“That’s what mattered the most, was to see the kids win. Not all this other stuff. It was nice to get, but it was never anything that I cared really about.”

“I just wanted to make sure that I gave a lot of praise to the Lord, to Jesus, as I said in my opening statement, that I’m grateful to God for everything he’s done for me throughout my life,” Cacciatore said.

He instilled his beliefs in his athletes.

“'Catch’ was amazing,” Evans said, “because he brought the whole spiritual side to competing and that’s something that I took with me throughout my whole career. Competing to me, I aligned that with my spirituality and it gave me another reason to fight, and it gave me something to hold onto.”

Evans prayed for the strength to harness his tidal waves of adrenaline, to somehow overcome his intense cocktail of emotions before stepping into the octagon and trying to survive another warrior attempting to beat him into submission or unconscious.

When Evans was a kid, Dixon never allowed him to quit.

Each time he skipped wrestling practice, the coach would find him – and with his mother’s blessing – work him even harder.

“And that’s when everything started to change for me,” Evans said, “when it came to what I got out of the sport. Because the more I put into the sport, the better I got out of it.”

Evans placed fourth in the state his junior and senior seasons.

He also helped the Niagara Wheatfield football team win back-to-back Section VI championships. And when it came time to select a path for college, he picked the pigskin.

Evans enrolled at Division III College at Brockport, 50 miles to the east, on the outskirts of Rochester.

But he never went. 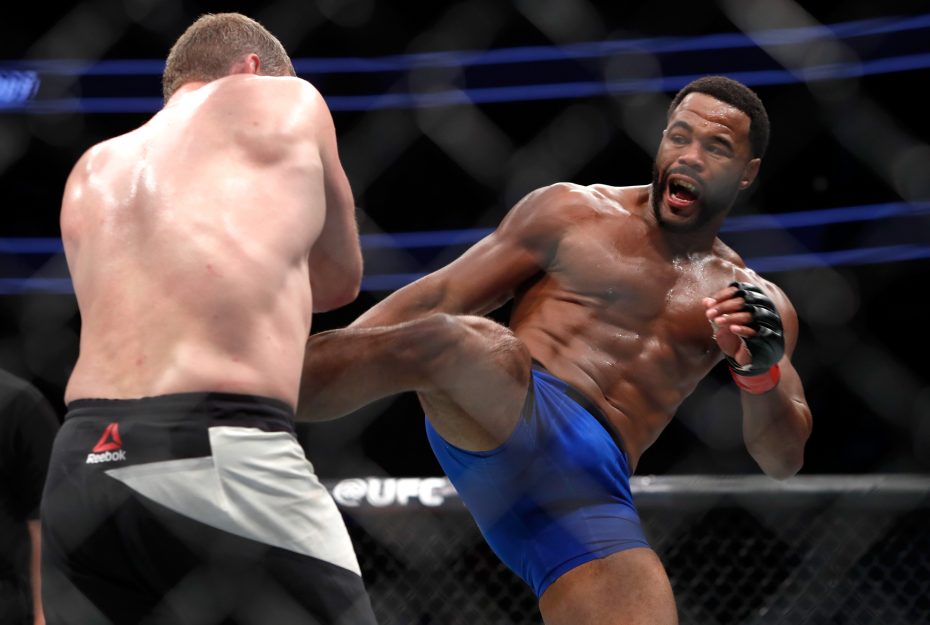 The pipeline from Niagara Wheatfield to NCCC was intrinsic.

Dixon’s oldest son had wrestled for the Thunderwolves. And Knuutila, since inducted into six halls of fame, had recruited Evans hard, going so far as to ensure the financial aid and other paperwork was in order to help facilitate his enrollment.

“We recruited him, and I’m a big advocate of making sure that all your things are in, your applications are in, your financial aid is in, everything’s in there,” Knuutila said this week. “I knew he was talking about Brockport because he was a great football player and a great wrestler. But I said, ‘Make sure you get all your stuff in both places. That way if you change your mind …’”

Evans didn’t have much interest in attending NCCC, what his Niagara Wheatfield classmates called the “13th grade.”

Plus, it didn’t have a football team. Not only would Evans get to play football at Brockport, but he was talking to the school’s longtime wrestling coach, Don Murray, about joining his team, as well.

But as moving day approached, Evans had second thoughts.

“They had a good program,” Evans said, “but it just didn’t sit right in my gut.”

“I looked at the fact that the transition for me to going there would be a lot better,” Evans said. “And then also, I wasn’t the best student, so being at junior college also allowed me to academically catch up. And that was huge for me, because if I didn’t go to ‘N-Triple-C,’ I don’t know if I would have went to Michigan State University.”

But in the moment, he said, there was one primary draw.

“Eric Knuutila was the main reason why I went to N-Triple-C and wrestled there,” Evans said. “I’m one of those athletes, I compete better for coaches that I have a lot of love and respect for. Eric Knuutila was one of those coaches who I could tell who cared, who went the extra mile, who made sure that it wasn’t just about getting me on the mat and wrestling. He really cared. He cared on another level, and to me, that made me want to compete for him.”

Evans showed up unannounced on the first day of class at NCCC.

Knuutila turned to athletics director Lee Wallace, who years earlier had been Evans’ junior varsity football coach at Niagara Wheatfield, to see whether it was too late to get Evans enrolled at NCCC and his situation settled with the NCAA and Brockport.

“Eric came in and asked me, ‘Can we get him out of this?’” Wallace said.

All the paperwork was in order.

Salute to his coach

Evans wonders, had he gone to Brockport, whether he’d have ever left Western New York.

He wouldn’t have become captain of the wrestling team at Michigan State, or had the chance to train under former UFC fighter Dan Severn, who coached him on the reality show "The Ultimate Fighter 2," where he won all five of his fights and a contract with UFC.

He couldn’t imagine being asked to return to Niagara Wheatfield last November, when he was enshrined in the Falcons’ athletic hall of fame, alongside Cacciatore.

He placed fourth at the national JUCO championships as a freshman. And he also placed fourth in the New York State meet, featuring athletes from two- and four-year schools, in each of his two seasons with NCCC, similar to high school.

All those fourth-place finishes started to become a bad joke.

“We wanted to get that monkey off our back,” Knuutila said.

Evans capped his sophomore season with his first championship, winning the National Junior College Athletic Association wrestling title at 165 pounds. He defeated Anton Hall of Muskegon Community College by 5-3 decision, avenging a loss to Hall from earlier in the season to become the fourth national wrestling champion in NCCC history.

He was sorry, he joked, while leaving the mat.

“Beating him, it was such an incredible moment because it was vindication,” Evans said. “Not only for that series, but for the other years even in high school when I didn’t get the state championship when I wrestled underneath Bill Dixon.

Dixon died from pancreatic and liver cancer in 2004, just days before Christmas. He was 50 years old, and buried in Bill Jr.’s varsity jacket.

Evans was unable to make it home for the funeral.

His reality TV star turn wasn’t until the following year.

“Saying goodbye to him was one of the hardest things that I’ve done,” Evans said, “because he was like a father to me.”

From afar, Evans was able to orchestrate a tribute, his way to honor his coach with an enduring piece of shared legacy.

He had the family place his national championship medal into the casket.

“That’s his medal,” Evans said. “I wouldn’t have won anything without Bill Dixon.”