He hasn’t had much time, he said – not to boast, but by way of explanation.

Ganley has been global CEO since 2003 of Ivoclar Vivadent, a company with roots in Buffalo that has become the world leader in aesthetic dentistry.

The only exercise he’s managed to squeeze in is running – which seems fitting for a guy who has alternated work weeks during that time between the North American headquarters in Amherst, where he has served as Ivoclar president since 1990, and the global hub in Schaan, Liechtenstein.

Ganley, 67, retired last week, and gave assurances that the Amherst location and its almost 240 jobs are safe in the hands of its new global CEO, Diego Gabathuler, and Christian Brutzer, the new head of North American operations who will be based in Western New York. Because Ganley's former duties have been split, his successors can avoid a work schedule with as much demanding travel.

“Somebody asked me, ‘How did you do what you’ve done for 16 years?’" Ganley said. "I said, ‘The key question is how do you not do it? My body expects the six-hour time change.”

Ganley looks to pause for the summer and recalibrate life with his wife, their daughters, Ellen Grant and Laura Nyitrai – who, like their parents – live in Amherst, and five grandsons, who range in age from 2 to 10.

“I've been lined up for some babysitting gigs,” he said during an interview last month at the Amherst headquarters.

Most in the region may be unfamiliar with the name Ivoclar Vivadent, but it is one of the most recognized in dentistry, said Dr. Joseph Zambon, dean of the UB School of Dental Medicine.

Ganley has been the architect of its success, Zambon said.

“When I started as a dental student and he started at Ivoclar 30 years ago, the dental materials were nowhere near as good as they are today,” Zambon said. “That's in no small part due to Ivoclar, the material scientists at Ivoclar, and Bob Ganley's leadership in the industry.”

Ganley, a Syracuse native, came to Western New York to go to college. He met his wife, the former Louise Touma, while the two were undergrads at St. Bonaventure University. Ganley got a math degree at the Olean school and the couple married while he worked on his master’s in business administration at UB.

In the late 1980s, Ganley helped broker the sale of Williams Gold Refining Co., a dental alloy manufacturer in Buffalo, to Ivoclar Vivadent, a privately held business based in Europe with aspirations to grow.

Owner Christoph Zeller hired Ganley as part of that effort, as sales languished at about $40 million annually in North America, and turned to him to run daily operations globally in 2003.

They now approach $300 million a year in North America and $1 billion worldwide.

The company focuses on restorative, fixed and removable prosthetics. Think the manufacturing of dentures, crowns and veneers – as well as the products that bind them and hold them in place, and machinery and products used to make and maintain them.

The company operates in 29 countries, runs 31 dental training centers, and has 3,500 employees across the globe.

That includes about 240 in Amherst, along with other facilities in Mississauga, Ont., Seattle and Somerset, N.J.

“We feature products from cradle to grave," Ganley said. "We focus on direct restorative care. If you went to the dentist, he or she would put a sealant on your tooth or they would they would clean your teeth with toothpaste. That could be ours. They might seal a child's tooth for prevention. If you have a hole in your tooth, cavity a carie, we're one of the world's leaders in white filling materials. They put that curing light in your mouth and [bond] it. That's what we would call restorative.

“We have a full line of products in this area and 3M is one of our major competitors. We're bigger than they are in Europe and they're bigger than we are here.”

Dentists in Western New York, however, are more aware of Ivoclar Vivadent and more likely to use their products. UB students also are among those who sometimes train in Ivoclar Vivadent clinical labs and operating theaters, including in Amherst, Zambon said.

They are not alone. The North American headquarters works with more than 25 dental schools across the country and helps the company train roughly 50,000 dentists and dental technicians annually about how to use the latest tools and technology in restorative care.

Dr. George Tysowsky, senior vice president of research, technology and professional services with Ivoclar Vivadent, is one of six dentists on staff in Amherst and is on the faculty at both UB and University at Rochester dental schools. 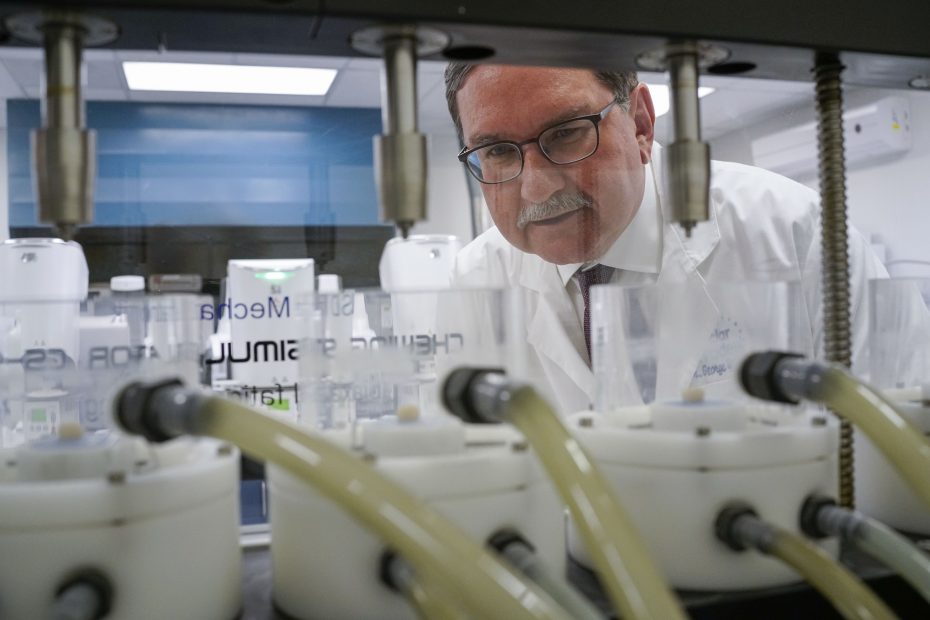 Dr. George Tysowsky, senior vice president of technology and professional relations, demonstrates a chewing simulator in the Applied Testing Center at Ivoclar Vivadent in Amherst. The simulator sprays teeth with hot and cold water while subjecting it to repeated impacts of differing intensities to determine the strength and endurance qualities of different materials and designs. (Derek Gee/Buffalo News)

The Ivoclar global headquarters in Liechtenstein boasts a staff of more than 1,000, including 250 people alone in research and development.

The Ivoclar Amherst tract on Pineview Drive is similar to other company locations around the world, including its 99,000 square feet of work space. It’s nestled among a collection of professional office buildings in a quiet section of Amherst about a mile northeast of the UB North Campus. Light manufacturing is permitted in this part of Erie County’s largest town. One of M&T Bank’s technology centers is located nearby.

The Amherst headquarters opened in August 1989 and has undergone two expansions since. It includes a sales and marketing building, dental education wing and a three-story distribution warehouse. Workers also focus on research and development and specialty manufacturing.

Up to 15 dentists at one time can use the latest technology in the ceramics lab to improve the way they make and affix crowns, dentures and other dental materials.

“Dentists are tactile,” Ganley said. “They like to come in and sit at a bench and work on a product."

Nearby, dental technicians work in a CAD/CAM lab, perfecting computer-assisted technology and milling machines that Ivoclar Vivadent sells to dental labs that design and build ceramic teeth to spec for dental patients – eliminating the need for those patients to sit with goop in their mouths while their dentist creates dental impressions and mails them off for restorative work.

“The digital workflow brings in such a higher level of accuracy,” said Bill Barton, a senior technical consultant and certified dental technician who works in the CAD/CAM lab.

Ivoclar Vivadent sells the software and machines that mill materials that make crowns, bridges and dentures to dental labs, and will soon offer 3D printing systems that can help those laboratories improve the restorative process.

The company also will soon make its first foray into “augmented reality,” launching a “smile design” app devised by a Disney scientist. In this case, it will allow users to train in on their smile and see examples of how restorative technology can improve them.

“It takes what you are and makes what you wish to be,” said John Isherwood, Ivoclar senior corporation communications manager. “It's a great tool for doctors to be able to showcase an opportunity with patients.”

Such work is being supported and improved by research and development including in Amherst, with help from university programs and foundations.

A company that once developed metal dental products now works with ceramics and polymers for dentistry, including zirconium oxide, which can make dentures and crowns last longer.

In the Amherst-based Applied Testing Center, “we have alloys that we pull apart. We can do compressions. We crush things, we bond things, then we break those off," he said.

The lab even has a “chewing machine” that measures the relative effectiveness of different crowns and dentures.

“When we have a new cement or glue we section teeth, and we prime them, and we glue the products to them," Tysowsky said.  " And this will tell us how strong it is relative to the bond. And the materials that we have today are stronger than tooth itself. The tooth will break many times before the interface. So the idea is not to have a material that doesn't wear, the idea is to have a material that wears like a tooth.”

Ivoclar products are sent to customers at the rate in Amherst of 1,200 to 1,800 pieces a day, said Mark Utzig, director of operations for supply chain management.

The distribution center stores about 28,000 different products ranging from  CAD/CAM milling machines that weigh 600 pounds and cost up to $100,000, to a card of six to eight denture teeth, Utzig said.

Ganley and Zeller, the company owner, both retired on the same day – though their work with Ivoclar Vivadent will continue. Both will sit in paid positions on the Ivoclar board of supervisors, which oversees the company, for at least three years.

It will mean only about a half dozen trips to Liechtenstein each year for Ganley, and more time to spend in his home in Williamsville, and other homes in Sarasota, Fla., and along Skaneateles Lake in central New York.

“I'm never going to change residence,” he said. “I really like it very much here.” 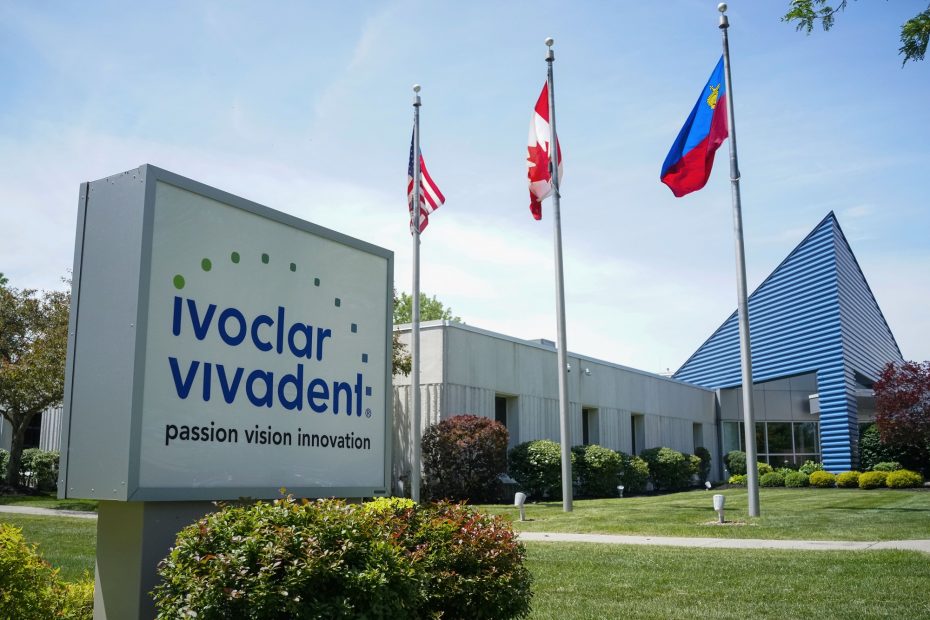