The gulls, fearless and irritable, fought for scraps of day-old food along Scott Street. The emerging morning sun stretched out a finger Friday toward the peak of City Hall, a sunrise you could stand back and savor from Canalside, where it was too early for anyone to worry about setting up turnstiles or yellow tape.

One of the great truths of enduring a wet, gray spring shortly before the steamiest days of a Western New York summer is just how beautiful the world always seems at dawn, a truth reaffirmed 100 times over when you have 12 tall ships docked amid the first rays of July sunlight in the Inner Harbor.

We like to talk in Buffalo about comebacks and revival and renaissance. And every time something good happens, we find a way to round up and recycle those words, until it reaches a point where you need to double-check or it is easy to miss the moments that truly signal the extraordinary.

To stand on a wooden boardwalk, with the Skyway and the city skyline to your back, listening to ropes slapping against the wooden masts of a line of 19th century-style vessels, as a wisp of a warm morning breeze comes off Lake Erie?

That is an appropriate time for such language.

The power of it is intensified for those of us whose hair has turned gray. It only seems even more unbelievable if you recall when a drive along Route 5 brought you through the torches, smokestacks and black clouds of Lackawanna, just before the highway lifted you up and then carried you down near a Buffalo waterfront whose shipping heyday, long past, gave way mainly to desolation.

Finally, as a community, we began reaching back toward our lake and rivers.

While an estimated 40,000 showed up to see the tall ships on the Fourth of July, the place at dawn the next day was all but empty. Some early risers on the ships walked the decks and shook off sleep, a couple of crew members still wrapped in blankets. A lone worker could be heard breaking down some folding tables on the grass, but basically it was just a touch of breeze and the rustle of ropes and a few awed wanderers.

That included three George Wenners, and a friend. George III – a fitting name, if ever there was one, for the Fourth of July weekend – is a retired elementary school teacher and principal who is a professor emeritus at SUNY Buffalo State. His son, George IV, is 49 and lives on Grand Island, and he brought along his son, 13-year-old George V, who "always likes to see what's going on."

The friend was Robin McGrath, a retired administrator from SUNY Stony Brook who now lives in Buffalo, and the little group has a tradition of taking early morning walks every Sunday when the weather is nice enough to do it.

In honor of the tall ships, they shifted the dawn ritual to Friday, figuring they could see the ships at a peaceful moment and avoid the rush once everything got rolling.

That strategy alone contained enough really-think-about-it power that I handed it back as a question to George III:

When you were a kid, did you ever figure you would see a day when you would need to figure out a way to beat the crowds along the waterfront, not far from the Skyway?

He made a noise, a wonderful wordless noise of sheer impossibility and disbelief, and then he said: 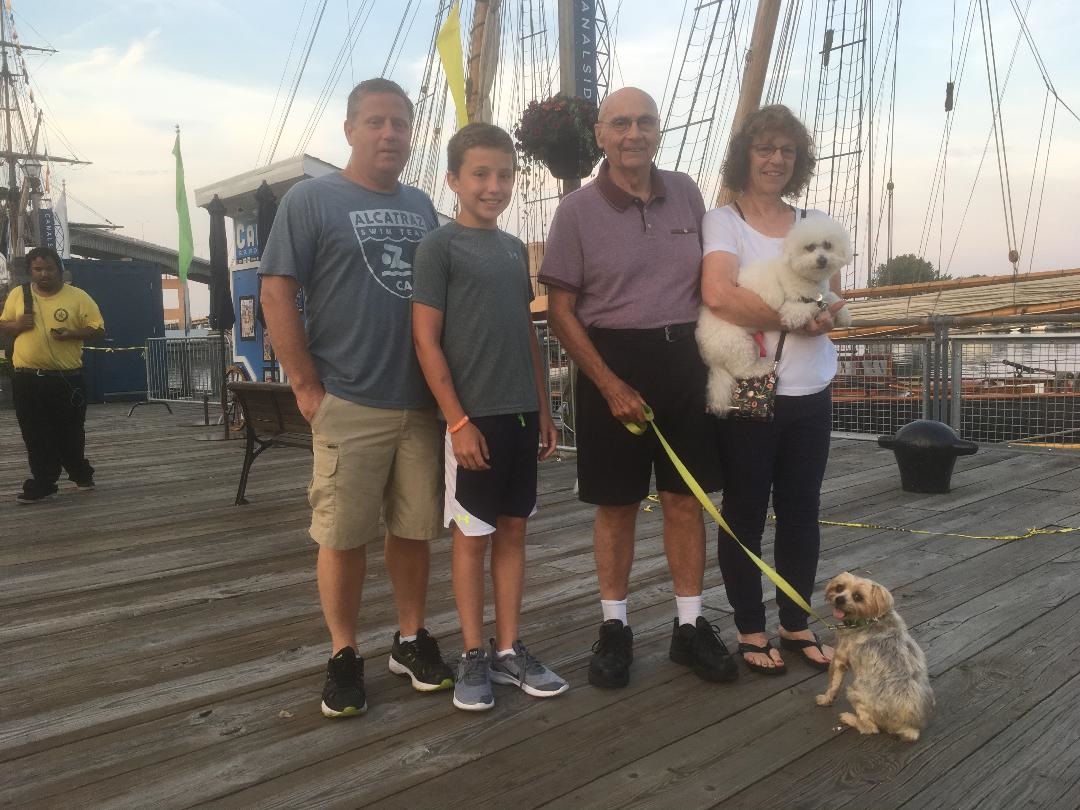 If he had any sentimental memory of the area, it was catching the boat for the old Crystal Beach amusement park. For the most part what he recalled was rust, murky water and desolation. While his father was a railroad man who would sometimes take the kid into that part of the city, his mother saw the area as “dirty and scary,” and George III was forbidden to go there alone.

Now? It is a place of henna tattoos and lawn chairs, of booming music and the coconut scent of tanning lotion. At 79, George III routinely gathers his namesakes for walks in what once was the shadow of the now-vanished Memorial Auditorium, savoring a waterfront that for so long went unseen by its own city.

If there is a lesson, maybe it is the simplest one. For too many years, as Buffalo endured its descent in population from the nation’s 15th largest American city in 1950 to wherever we are now, there was a panicky sense that our only hope was the next big thing, the silver bullet turnaround, whether it involved a convention center or a downtown mall or any phantom pursuit of some change-everything-project.

In fact, the best engine for the kind of baseline motion that counts the most was always at our physical, emotional and visual doorstep.

It was Lake Erie, the same lake we had dirtied and walled off and all but forgotten, and the great river it sends rolling toward the falls. What matters for the future of a 21st century city is not statistical size but vibrancy, and the reason this community became vibrant in the first place, a couple of centuries ago, was because a few visionaries – looking at a waterfront that was kind of like, well, home plate for the upper Great Lakes – realized what could happen if they established a true harbor.

And true harbor is all we want any city to be.

There is a long way to go until that idea stretches into the multiple areas that sorely need it. Many people in struggling Buffalo neighborhoods still suffer. And generations of Western New Yorkers dream of a day when they can make the same noise of joyous disbelief about seeing lots of people casually milling along the core blocks of Main Street, at least after business hours, that George Wenner III made at dawn about the changes at Canalside.

Yet that he made the noise at all proves what imagination can do in places where we might otherwise not see it coming, a kind of energy we all hope will move even heavier boulders in this region. It also explains why Robin McGrath – who moved to Western New York as an adult, to join her children – now has no wish to leave.

Instead, she adds such emphasis to one of those words we hear all the time that it is almost like hearing it anew.