Discreetly, FBI agents in Buffalo are evaluating and watching individuals they believe are on the path to a mass shooting.

Agents say the people they're keeping tabs on – about six in this region right now – have shown credible signs of being a threat.

The effort, which involves mental health professionals and school officials, is usually secretive enough that the person being watched doesn't know it.

The goal, of course, is to prevent mass shootings before they happen and to get help for the people they see as a possible threat.

FBI agents will tell you, without hesitation, that the effort has prevented what happened at Virginia Tech or Stoneman Douglas High School from occurring here.

"Absolutely," FBI Special Agent Brent Isaacson said of the dozens of people watched by the Buffalo office over the past seven years. "Not one has gone off the deep end."

Created after the Sandy Hook shooting in 2012, the program is part of a larger FBI response to mass shootings across the country.

On a weekday morning last week, Isaacson stood before a gathering at D'Youville College and gave his primer: "What does an active shooter look like?"

He talked about a pathway to violence and the stages a person goes through before resorting to an attack. He also spoke of the signs of trouble and the wide range of interventions that might follow.

Like all his visits to colleges and houses of worship, Isaacson urged everyone in the lecture hall to have the "courage" to step forward when they see a student or co-worker showing signs of being on that pathway.

"In nearly every single case, there was at least one person who saw concerning behavior," he said of the numerous shootings over the past several decades. 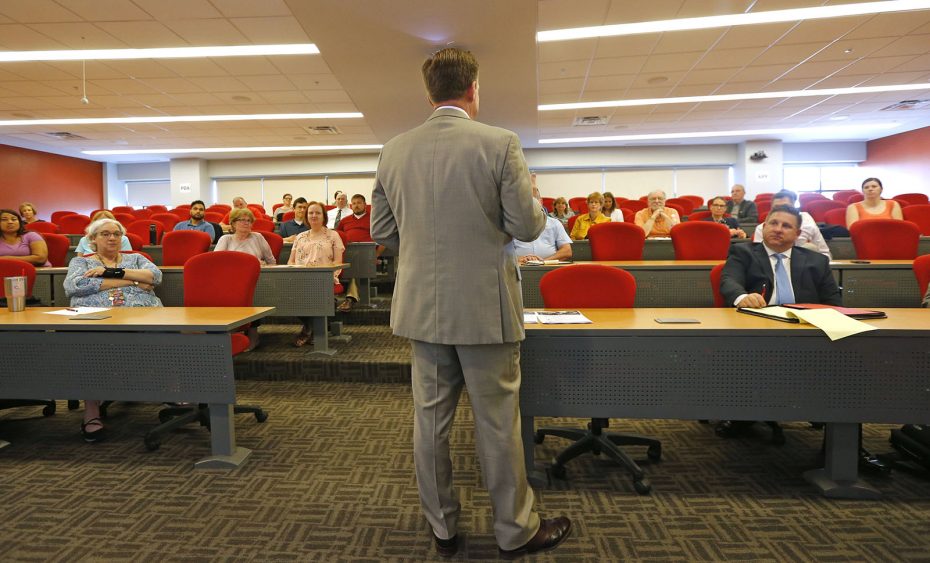 He told the faculty and staff at D'Youville about the dozens of people the FBI in Buffalo and its partners have watched, some for a few weeks, some for years. And to explain why they do it, he told them about a high school student in the region who publicly proclaimed himself to be "the next active shooter."

Already formed in preparation for something like this, a group consisting of the FBI, the local district attorney, school officials and mental health professionals met to assess the threat. They quickly learned the boy had no access to guns and decided he was not an immediate serious threat.

They also discovered he was being bullied at school, lacked a stable home life and was generally a loner.

Instead of arresting him or even confronting him, they discreetly arranged for a transfer to another school. They also ensured that a school counselor would keep in touch with him and that others would engage him in school activities.

In every instance, he said, the goal is to give that person "an off-ramp" from the pathway to violence.

An FBI agent for 22 years, Isaacson believes in the program. He is retiring from the FBI to become chief of university police at SUNY Fredonia.

At least twice in his talk at D'Youville, he told the crowd, "This works."

He also told them about the warning signs, which can range from erratic, unsafe behavior and deep-seated feelings of injustice to sudden changes in work performance.

Isaacson also talked about the hallmark traits of an active shooter, including an infatuation with media that glorifies previous active shooters.

As part of his talk at D'Youville, he took the crowd through a history of mass shootings, including the one most experts recognize as the nation's first, the 1966 shooting at the University of Texas. Charles Whitman, a student and ex-Marine, stood atop the clock tower on campus and shot 45 people, killing 14 of them. He had previously killed his mother, wife and three people inside the tower.

Like many active shooters, Whitman assembled an arsenal, a footlocker full of guns and ammunition, as well as food and water. He also left behind a suicide note detailing his "mental turmoil" and requesting an autopsy after his death.

"These legacy tokens are a way of letting the world know why they're doing what they're doing," Isaacson said.

He said active shooters also share one other trait. They all have a grievance, whether it be at work, at home or at school.

Except for a few common traits, Isaacson will tell you that it is impossible to profile mass shooters: They are not all male, white and young. To make his point, he pointed to the 1979 shooting at a San Diego elementary school that left two people dead and nine others wounded.

The shooter was Brenda Spencer, a 16-year-old girl.

"What we have learned is that profiles don't work," he said.

What does work, he told the gathering at D'Youville, is prevention, including the kind of discreet, nontraditional investigations into potential mass shooters now going on across the nation.

That effort, based on research by the FBI's Behavioral Analysis Unit, focuses on identifying people who may be on the pathway to violence and providing them a different route.

"We're really good at assessing the threat and mitigating it," Isaacson told the crowd at D'Youville.

Good enough, he adds, to have prevented an active shooting in Western New York.