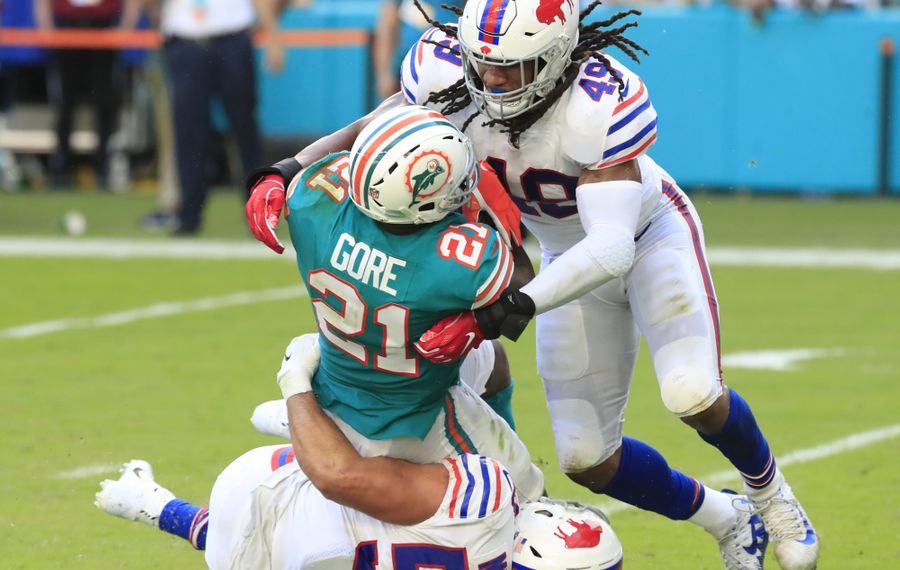 This is the seventh in a series previewing each position on the Buffalo Bills before the July 25 start of training camp.

Secondary is widely regarded as the Buffalo Bills’ strongest position, but linebacker isn’t far behind — if it trails at all.

Three of the Bills’ more talented and productive players can be found in the defense’s primary anchor, middle linebacker Tremaine Edmunds, and outside ’backers Matt Milano and Lorenzo Alexander.

Entering his second season after joining the Bills as a first-round draft pick from Virginia Tech last year, Edmunds has the makings of a dominant force for many seasons to come. In only scratching the surface as a rookie, he showed flashes of exceptional athleticism and play-making skills, as well as instincts and savvy that belied his youth.

In 2018, Milano was having a year worthy of strong Pro Bowl consideration before suffering a broken fibula in Week 14. He has proven to be a consistent play-maker with an uncanny ability to always be in the right place to recover fumbles. Having Milano back healthy and at full capacity gives the linebacking corps, as well as the entire defense, a critical ingredient to perform at an even higher level than last year when the Bills were No. 2 in the NFL in yards allowed.

Of course, that assumes Alexander, who turned 36 in May, is the same difference-making force in his 13th season -- which he intends to be his last – that he has been for most of his three previous years with the Bills. Given how exceptionally well he takes care of his body, that doesn’t figure to be a problem.

What could be an issue is depth. After the starting three, there are more questions than answers with the rest of the linebackers on the roster.

Key numbers: As a rookie last season, Edmunds was the only NFL player with 120-plus tackles, 12-plus passes defensed, two-plus sacks, two-plus interceptions, and two-plus forced fumbles. At 20 years, seven months and seven days, he also was the youngest player to intercept a pass in league history (against the Jets on Dec. 9, 2018). … Milano was the only player in the league last season with 75-plus tackles, three-plus interceptions and three-plus fumble recoveries. … Lorenzo Alexander’s nine passes defensed last season ranked fourth in the NFL among linebackers. He also joined Bruce Smith as the only Bill with a sack in seven consecutive games.

What to expect: As with quarterback Josh Allen, there will be considerable attention to see how much progress Edmunds, the Bills’ other first-round choice last year, has made entering his second NFL season.

No one is watching more closely than Sean McDermott.

“I’m excited about it,” the coach told reporters during offseason workouts. “Guys that (entered the 2019 draft) are older than Tremaine in the draft so that’s a little bit of a unique situation, but to watch him just physically mature from the time he left to the time we saw him a few months ago, you know he’s been working and that’s been nice to see. It doesn’t surprise me knowing him. He works at things, it’s important to him.

“I’ve watched him take leadership steps this off season since he’s been back and some of that means Lorenzo has to give up some of that in the linebacker room. That’s a very unselfish approach by probably our biggest leader on our football team is to pass that torch in some ways to Tremaine. That’s a sign of a good football team, when you’re an unselfish team and you have a bunch of unselfish guys. That’s a good quality to have.”

Former Bills defensive tackle Kyle Williams had that quality. As important as anything he did before retiring at the end of last season was calling upon Edmunds to lead a defensive meeting. Not only did it do plenty to help build Edmunds’ self-confidence, but it also did wonders to boost his teammates’ confidence in him.

The 6-foot-5, 253-pound Edmunds also has stepped up his physical conditioning significantly from a year ago.

What does Milano’s return from injury mean?

“Continuity,” McDermott said in May. “We have got a lot of the guys back off of the defense from a year ago, which doesn’t mean anything other than continuity. We got a lot of work to do and Matt is knocking some rust off, as he would say himself, and (being on the field for the start of OTAs) was a good step in the right direction in terms of him getting back in the fold and going full go.”