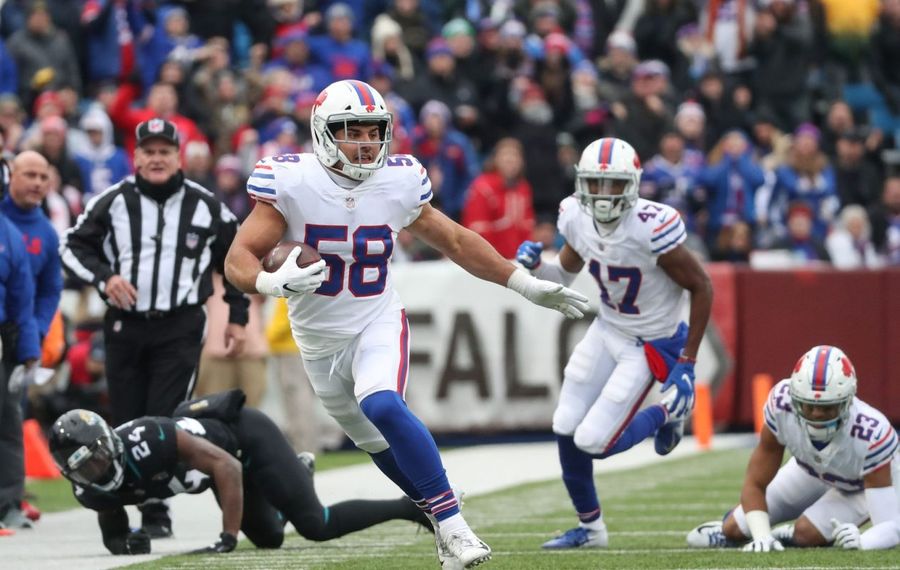 Matt Milano spent the offseason rehabbing his broken left leg and boning up on the playbook.

A fifth-round draft pick in 2017, Milano enters his third season in the NFL and second as the Buffalo Bills’ starting weakside linebacker, beside middle linebacker Tremaine Edmunds, with a couple of long-standing goals in mind and a foundation in place for achieving them.

“Just trying to continue to stay healthy and then just make as many plays as I can to help the team win,” Milano said during voluntary offseason workouts. “That’s my main objective right now. I’ve got a pretty firm grasp of the defense. I think me and Tremaine have a good connection going on as far as communication goes, and then just trying to make as many plays as I can.”

Milano started the first 13 games last season, until being carted off the field with a dislocated ankle and fractured fibula late in a home loss to the New York Jets on Dec. 9.

Milano had surgery the next day, ending his season with 78 tackles, including 12 for loss and a sack, plus seven pass breakups, three interceptions and three fumble recoveries.

At the time of his injury, Milano was tied for the second-most takeaways in the NFL, the Bills owned the league’s top-ranked overall defense and pass defense, and defensive coordinator Leslie Frazier said Milano was having a “Pro Bowl-caliber season.”

“He’s very instinctual. He has a great feel for the game. Very athletic,” the veteran strongside linebacker said about Milano. “I think his DB background (from early in his career at Boston College) has helped him transition to a league that’s now more pass-oriented and more spread, so it really fits the type of player he is. And one thing I’ve liked, really last year in the second half of the season, just being a more physical player, as well, and not taking (nonsense) from people.

“He’s really starting to come into his own and I think really going to open up some eyes on a national scale this year.”

“The best part about Milano’s game is how quickly he recognizes plays,” Wood said. “He penetrates the line of scrimmage from the linebacker position so fast, because he recognizes formations. He’s extremely smart, he’s extremely well-prepared, and then he’s athletic. He flies around the field and he’s explosive. And guys like that, they’re tough to block because they recognize things so fast. He reminds me a little bit of a Luke Kuechly type, where he’s so good with his pre-snap reads, and then you add some athleticism, and those guys are tough to handle.”

Milano spent much of his offseason rehabbing in Buffalo.

He said he had a metal plate and screws inserted to stabilize the leg, that he couldn’t walk for six weeks and needed three to four months before he could run. He also had a follow-up procedure to remove some of the hardware.

Throughout the ordeal, he said he worked to keep his mind sharp.

“The whole offseason I just kept a little eye on the plays from last season, not trying to forget it and have to relearn the whole thing, so that’s something I was doing,” Milano said. “It definitely helps a lot. I can remember going back to when I was a rookie, just learning the playbook, not knowing anything coming in, to where I am now.