A state court decision allowing Amherst to take over a former gas station in Eggerstville means the "zombie" property is close to coming back to life.

But the New York City billionaire who owns the site is so frustrated by the town's attempt to grab control that he said he's made a decision: Erie County is dead to him.

Catsimatidis said he has tried to negotiate in good faith but that the town hasn't cooperated. He said Amherst's anti-business attitude has soured him on any future development here.

However, town officials say they have waited far too long for United Refining to clean up the parcel at Niagara Falls Boulevard and Kenmore Avenue. They want to turn the prime intersection for the towns of Amherst and Tonawanda and the City of Buffalo into a gateway park.

And Amherst Supervisor Brian J. Kulpa dismissed Catsimatidis' complaints, pointing to a long list of developers that have announced major retail and housing projects in the town.

"Evidently the market's dried up and the world's on fire in Amherst," Kulpa said. "Or maybe it's just that your leaving a parcel languishing on the Amherst market is no longer suitable for a town that's serious about committing to redevelopment of our West Side." 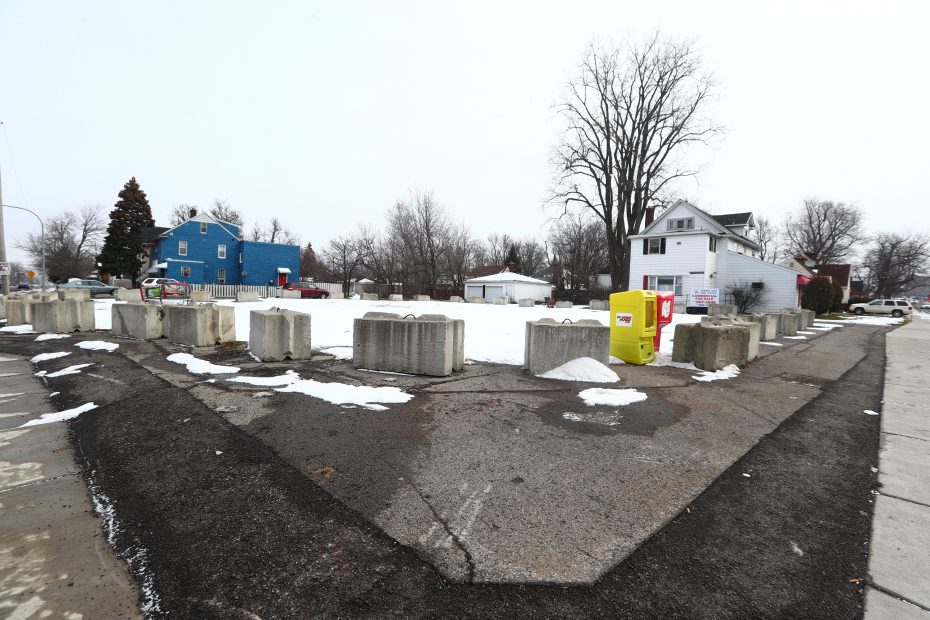 Viewed as an eyesore

The site at 159 Niagara Falls Blvd. has been a source of annoyance for Amherst officials for nearly two decades. A Red Apple gas station and convenience store closed in the late 1990s. The store and gas pumps are gone, leaving behind a gravel and asphalt lot surrounded by concrete barriers where shopping carts sometimes collect.

In 2015, the Amherst Town Board explored acquiring the property through eminent domain but didn't take action.

Kulpa, who took office in 2018, has focused attention on Eggertsville and, like his predecessors, has viewed the United Refining property as an eyesore.

The company owned at least four other former gas stations in the area. Following reporting on the issue by The Buffalo News and prodding from Sen. Charles Schumer, United Refining last year vowed to spend at least $250,000 to clean up the properties in Buffalo, Lackawanna, Amherst and the Town of Tonawanda.

However, while United Refining retained ownership and development rights for the other properties, Amherst wanted to take control of the Niagara Falls Boulevard site.

Negotiations stalled over this point, and Amherst went to court to seize the property through eminent domain.

United Refining filed a challenge in the Appellate Division's Fourth Department, which heard the case in January.

"This was an attempt by URC to delay the inevitable," Town Attorney Stanley Sliwa said.

The court issued its ruling Friday, knocking down the company's arguments and concluding Amherst has the right to take the property for a public use, Sliwa said.

The town now will resubmit its $81,000 offer for the parcel to United Refining, which has rejected that offer in the past.

Sliwa said, if this happens again, Amherst will proceed to State Supreme Court, where a judge would determine how much the property is worth.

Catsimatidis said the company is weighing its legal options, but he said the fight with Amherst has soured him on Buffalo Niagara.

He vowed not to open any gas stations or convenience stores here nor invest further in the area.

Asked if that promise applied only to Amherst, he asked a reporter what county Amherst is in. He then brought up a massive proposed tech investment in Queens that fell apart, in part over local objections.

"Is that what Amazon said about New York City? Well, that's what I'm saying about Erie County," Catsimatidis said. "Zero. How do you spell zero?"

Would he reconsider his existing operations in the area?

"You never know," he said, without elaborating.

He also asked for a refund on the real-estate taxes he has paid on the property in recent years.

"Go and vote for these people again. Make sure you vote for them," Catsimatidis said, sarcastically. Kulpa and the rest of the Amherst Town Board are Democrats, while Catsimatidis and his local consultant, Brian D. Rusk, are active Republicans.

Rusk said the billionaire business owner has given generously to charities across the state and in the Buffalo area, where he will be honored later this year by the Muscular Dystrophy Association.

He said Catsimatidis employs hundreds here, and his pledge could cost the region hundreds more potential new jobs, even a new gas station and food mart at this very corner.

"He does not bluff," Rusk said.

Kulpa said it's absurd to say Amherst is anti-business, citing various major developments in the works from Landmark Properties, the builder of student housing; WS Development, which plans to reshape the Northtown Plaza; and the group of investors who plan to overhaul the Boulevard Mall, among others.

In the end, the supervisor said, the town doesn't want to wait around any longer for United Refining to clean up the Niagara Falls Boulevard parcel.

It's better used if combined with a neighboring property – purchased by the town – and transformed into a passive park with a bus shelter, he said.

If the Niagara Frontier Transportation Authority extends the Metro Rail out to the University at Buffalo North Campus, the subway could run under that corner.

"The town saw an opportunity to take an intersection that's been underutilized for years, put a public purpose on it and jump start a local economy," Kulpa said. "It's not so brazen."