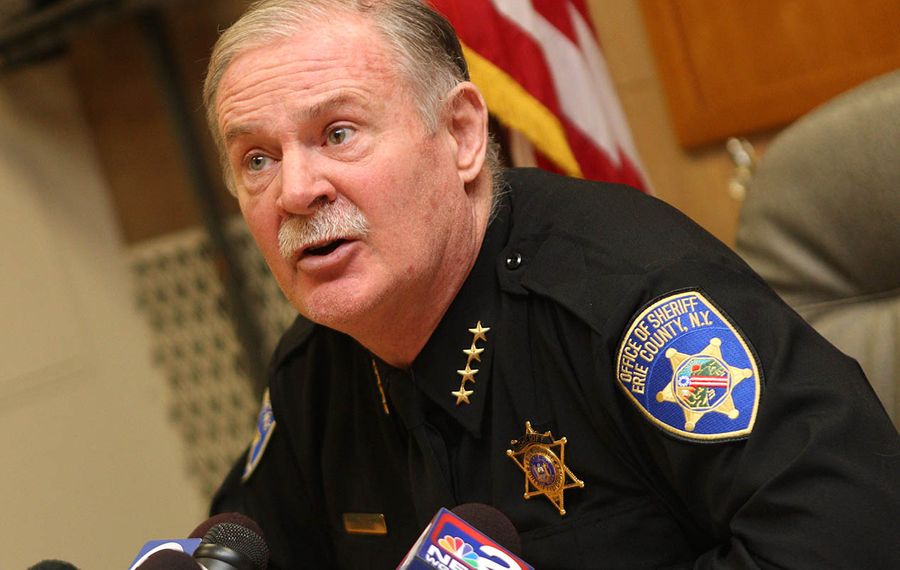 When Sheriff Timothy B. Howard sat for a deposition in a wrongful death lawsuit and answered "I don't know" 68 times, he still helped Erie County defend itself in the matter going forward.

Deposed in 2017, Howard said he did not know the answers to dozens of questions about how his department trains Holding Center deputies. But he still held to the assertion that his office — not county government as a whole — trains and monitors those jail personnel.

The benefit for Erie County government arises because the lawsuit filed in the death of inmate Richard A. Metcalf Jr. blames county government — not Howard or his Erie County Sheriff's Office — for failing to properly train and supervise the Holding Center personnel who tied the strings of a spit mask so tightly around Metcalf's neck he could not breathe. Metcalf went into cardiac arrest and never recovered.

The lawyers pressing the Metcalf vs. Erie County lawsuit, which names seven jail deputies, cannot allege that the deputies were negligently trained and supervised because there is no party in the lawsuit to blame for that. Neither Howard or the Sheriff's Office are named as defendants. County government is named, but it cannot be blamed for negligent hiring, retaining or supervising the deputies, the judges ruled, upholding the trial judge's decision.

"The deposition testimony of the sheriff and undersheriff (Mark N. Wipperman) established that the county was not involved in the hiring or termination of deputies," the judges who sit on the State Supreme Court Appellate Division's Fourth Department wrote.

Still, the case will go on because the lawyers with the Brown Chiari law firm allege other wrongdoing by Sheriff's Office personnel that they say led to Metcalf's death in December 2012. The inmate, who had been in a mental tailspin for days, had been spitting blood. So the deputies tied a spit mask around his neck, then pulled a pillowcase over his head.

They called for an ambulance to take him to Erie County Medical Center for a mental evaluation, but they did not let the medics remove the spit mask until he had been wheeled out of the Holding Center and into the vehicle, the medics told investigators with the state Commission of Correction.

When the medics removed the pillow case they found the spit mask. Its strings had been tied so tightly around the inmate's neck a finger could not be squeezed under them, according to the state agency's report. When the strings were finally cut away, Metcalf was in full cardiac arrest, according to one medic's statement.

The Erie County medical examiner at the time ruled that a heart attack caused the death, though she still ruled it a homicide by determining Metcalf's treatment at the hands of the deputies, as displayed by many bloody bruises,  contributed to his stress. When the Commission of Correction completed its investigation years later, it urged the county to label the death a homicide by asphyxiation. The medical examiner's office, controlled by County Executive Mark C. Poloncarz, refused.

[RELATED: Sheriff's testimony in inmate-death lawsuit is riddled with 'I don't know']

The Sheriff's Office spends most of its money and devotes the majority of its personnel on running the Holding Center in downtown Buffalo and the Correctional Facility in Alden. Still, Howard was unable to answer a number of questions when deposed in the Metcalf case by lawyer Timothy Hudson of Brown Chiari.

Hudson asked Howard, for example, whether all jail deputies are required to to undergo the annual in-service training.

"What topics are covered during the annual in-service training?" Hudson asked later.

Hudson asked whether Howard had developed any of the curriculum for certain training programs.

Who did develop it? the sheriff was asked.

Lawyers on both sides agreed to drop the Sheriff's Office because, as judges have determined in past cases, a sheriff's office is just an administrative arm of a county government and "not a legal entity possessing the capacity to be sued."

With the Sheriff's Office no longer a defendant and Howard not named as a defendant, State Supreme Court Justice Mark Grisanti agreed the lawyers could no longer allege poor training. It was Grisanti's decision in January 2018 that was upheld on appeal.