Buffalo public housing developments flunked half of their most recent on-site federal inspections and scored the equivalent of a "D" on another 20% because of bedbugs, leaky plumbing, exposed wires and other problems.

Almost three-quarters of the 18 inspections at Buffalo Municipal Housing Authority properties – including 27 developments — generated lower scores than prior inspections of the sites, according to The Buffalo News’ review of U.S. Department of Housing and Urban Development reports.

The inspections were conducted during six months in 2018. BMHA’s average score was 63 out of 100, with HUD using 60 as a passing grade. In comparison, the average score in 2014 was 75, The News found.

Some of the largest and oldest BMHA developments, including Langfield and Kenfield homes, received some of the worst scores, with problems running the gamut from bedbugs and roaches to missing railings, leaky plumbing, damaged roofs and pitted pavement. Kenfield flunked this time with a 55; Langfield with a 41.

The 78-year-old Langfield Homes not only remains the lowest ranked of BMHA developments, but its newest grade is five points lower than its grade six months earlier.

But even some of the relatively newer BMHA developments, like the A.D. Price Courts senior apartments, saw their grades fall. Built in 2011 at a cost of $14 million, the senior housing complex scored a 94 on a 2014 inspection. Four years later, its score dropped to 63. In addition to water leaks, exposed wires and peeling paint, the system for residents to call for assistance from apartments was not working in half of the units inspected there, HUD found.

Another section of the A.D. Price development, 55 duplexes and row houses that opened in 2009 at a cost of $11 million, earned a 61 in 2018 after receiving an 85 in 2014. Inspectors cited damaged roofs and siding as well as broken pipes and reports of bedbugs in some units.

"It's not like it used to be," said a 66-year-old tenant who has lived at A.D. Price for over five years. "Things don't get fixed." 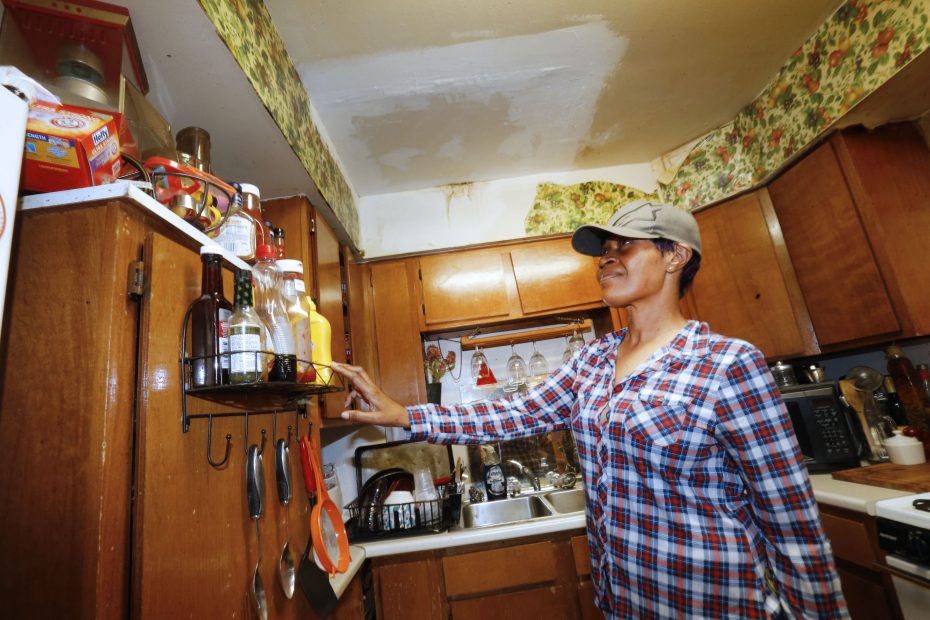 Since pipes in the bathroom of her Shaffer Village apartment busted for the third time about four months ago, Corie Cason has been waiting for the Buffalo Municipal Housing Authority to send someone to sand and paint the patch left in her kitchen ceiling. (Robert Kirkham/Buffalo News)

BMHA Executive Director Gillian Brown wasn't surprised by the low inspection scores given that HUD recently classified BMHA as a "troubled" agency – a designation held by just 3% of the 1,800 housing authorities evaluated. The condition of the developments, which Brown said reflects years of deferred maintenance, was among the factors that led to the designation, HUD officials said.

But Brown, who took over as executive director in October, said he's using these and other HUD reports as a blueprint to turn the struggling agency around.

In the past few months, Brown said, BMHA has started or approved $10 million in work at Langfield, Perry, Stuyvesant and LaSalle as well as a four-unit building that burned down last year on Troupe Street.

In addition, BMHA recently replaced A.D. Price management, a move that is already showing improvement at that development, he said.

And the BMHA board on June 20 approved a new funding mechanism, allowing the agency to borrow $15 million from future capital funds to address immediate needs at senior citizen developments. As part of that spending, BMHA is doing a comprehensive study to determine the condition of all BMHA properties. Authority officials anticipate the report will detail more than $300 million in needed work.

Brown said BMHA is also retooling some operations – doing things like leasing vehicles rather than buying and maintaining its own fleet — so that more money can go toward building upgrades and hiring additional maintenance staff. BMHA staff, which had been down to about 130, will soon be about 150, Brown said.

The authority's prior executive director, Dawn Sanders-Garrett, had blamed federal aid cuts for BMHA's problems. Sanders-Garrett did not respond to a request for comment last week.

Corie Cason, 49,  is standing in the kitchen of her Shaffer Village apartment on Ontario Street in Riverside. The cabinets are warped. A portion of the wall and ceiling is patched, but not painted.

The bathroom is located directly above the kitchen, and the pipes in the walls and overhead burst three times in the past 15 years, Cason said. BMHA repaired the pipes and patched the holes, but after the last incident about four months ago, workers never returned to finish sanding and painting, she said.

"I look at the ceiling and there are rust spots, and I don't know if it's mold or mildew," she said. "The cabinetry is ruined, the wood got wet so many times."

Right now, she said, her bigger concern is her bathtub.

When she moved in 15 years ago, Cason said, the surface of the bathtub had eroded, as if the enamel was scratched off.

In 2015, BMHA replaced the tub, she said. After the pipes last burst about four months ago, the tub hasn't seemed sturdy, according to Cason.

"The tub moves when we take a shower," she said. "It doesn't feel safe to stand in." 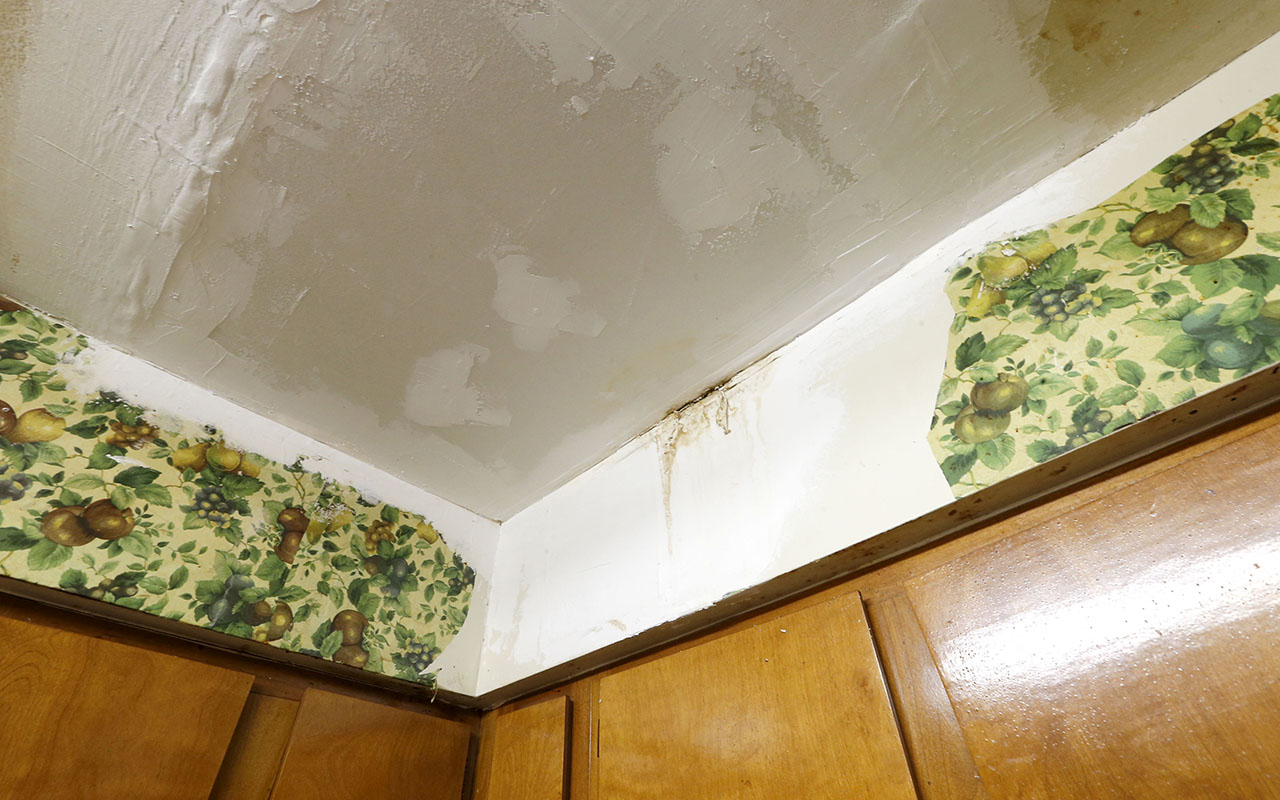 She wonders if the new tub was installed incorrectly, or the problem is related to the broken pipes.

"The water pools up. There's a puddle in back of the tub," she said, adding: "I don't know if the tub will fall through the floor because of the water damage. I could be in the kitchen cooking, and the tub would fall on me."

Cason's also concerned about the sewage backups in her basement, which had a foul smell during a recent visit by The News. The backups occur several times a year, she said.

Cason, a food services worker with the Buffalo schools, lives with her 22-year-old autistic son.

Shaffer Village and nearby LaSalle Courts – with a combined 439 units – were inspected together, getting a failing score of 52. That's a few points less than the 55 the two developments received when last inspected in 2015.

Brown has said BMHA recognizes that Shaffer needs substantial work, and that it will be next in line for a major overhaul once approvals and funding are secured. "We really want to work on Shaffer," he said.

"We've had meetings, and were told they would tear Shaffer down, and rebuild it," Cason said. "That was in 2014. Nothing happened."

Shaffer/LaSalle was among the nine failing scores from their 2018 inspection. Others getting below 60: Jasper Parrish Place (52), the Lower West Side Homes (58), Sedita and Stuyvesant apartments (50), Holling Homes, Camden and Elmhurst apartments (58); Frederick Douglass, Redwood and Woodson apartments and scattered sites (57); Commodore Perry senior high rises,  Slater Court and Mullen Manor (52); and Kenfield (55) and Langfield homes (41).

Not all BMHA developments scored poorly. A few earned the equivalent of an A or B. But even then, the news wasn't all positive.

Hertel Park received the best grade, a 98, up considerably from a 57 in 2016. That facility, however, is privately owned, and leases a few of its apartments to BMHA residents under an agreement with the housing authority. 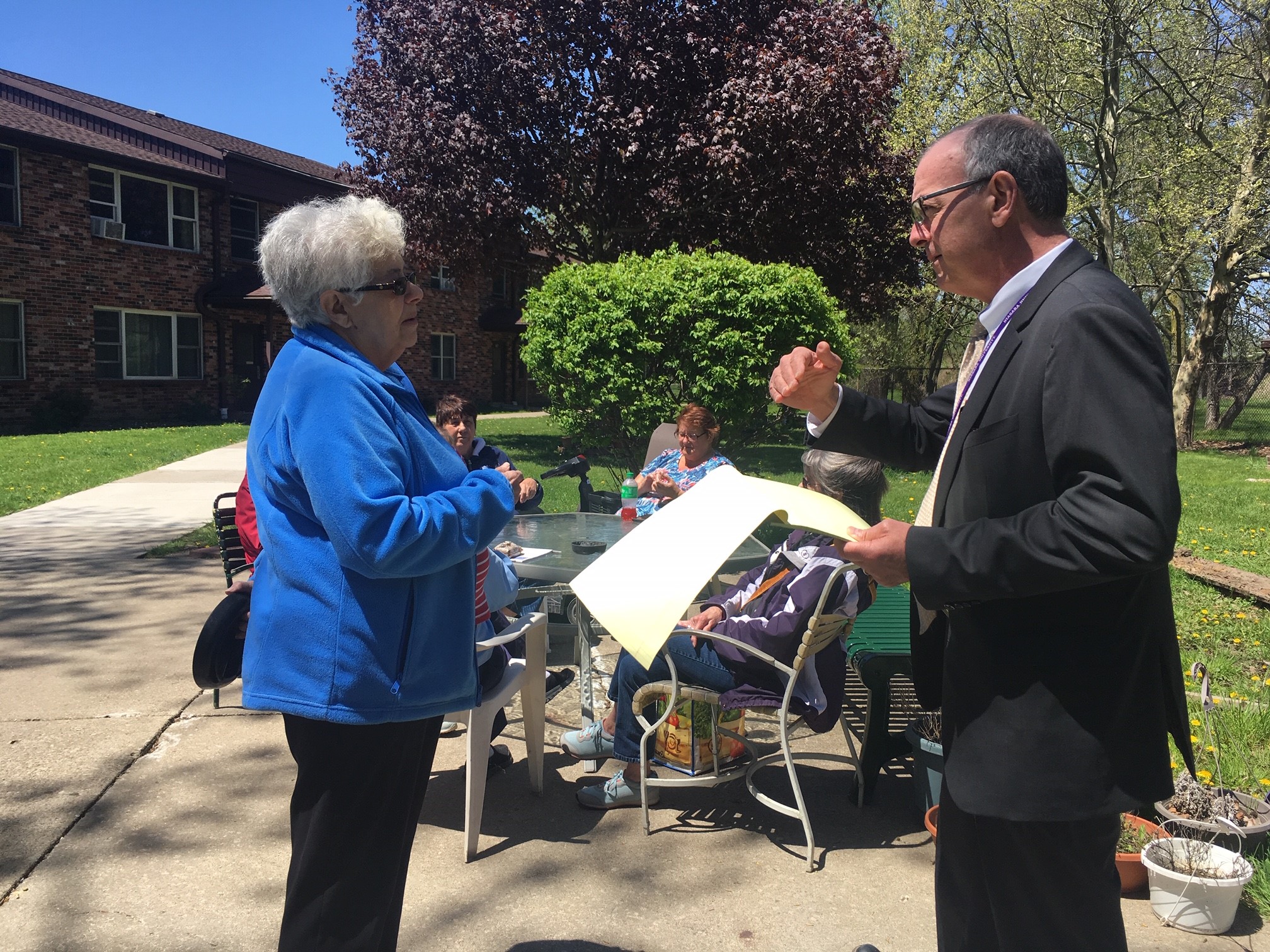 BMHA Executive Director Gillian Brown, right, speaking last month to a resident at Mullen Manor on Mineral Springs Road. Mullen is one of the housing authority's better-maintained developments, but residents say the emergency call system doesn't always work, wheelchairs can't get over door sills, and the roof of the community building needs to be repaired. Brown said the problems are being addressed. (Buffalo News/Susan Schulman)

Firm with ties to BMHA supervisor gets $391,000 from BMHA, mostly without bidding