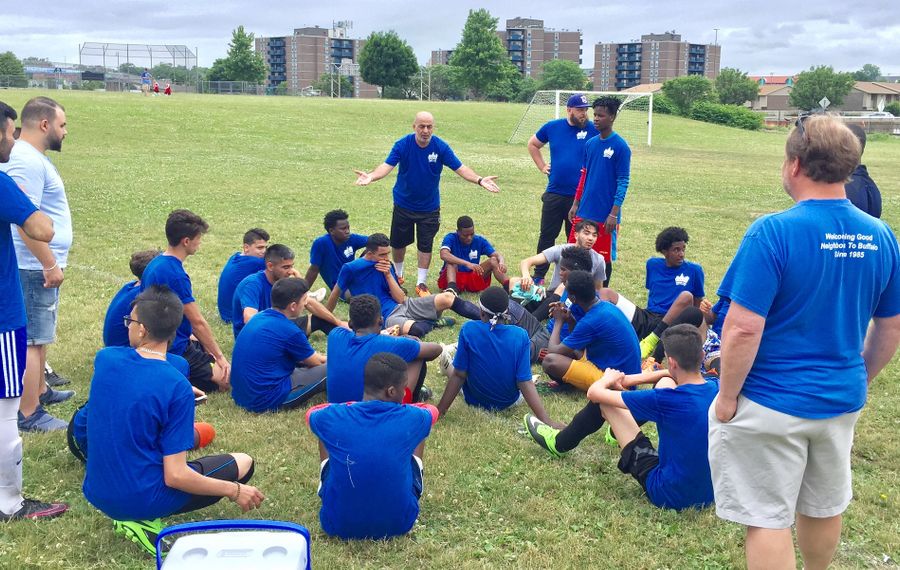 From a spectator's standpoint, his options for substitutes were fascinating. Kids who'd escaped war, poverty and oppression in Sudan, Afghanistan and Syria, among other embattled nations, eagerly awaited the chance to step on a soccer field in Buffalo, New York, and make a difference.

Donning dark blue T-shirts, the 17-person Journey's End Refugee Services team - with remarkably few speaking the same language - proved scrappy against their African opponents, thrilled that they mustered a goal but disappointed in a 2-1 loss during the 2018 tournament.

Sure, it was just a summer soccer match on a ragged, bumpy field with almost undecipherable lines on Buffalo's West Side, in a park that, until recently, had been forgotten in the city's emergence. But what that game meant was far more powerful, landscape-altering, even; it was the thrilling result of selflessness, compassion, inclusivity and community, all stitched together by a black-and-white orb. 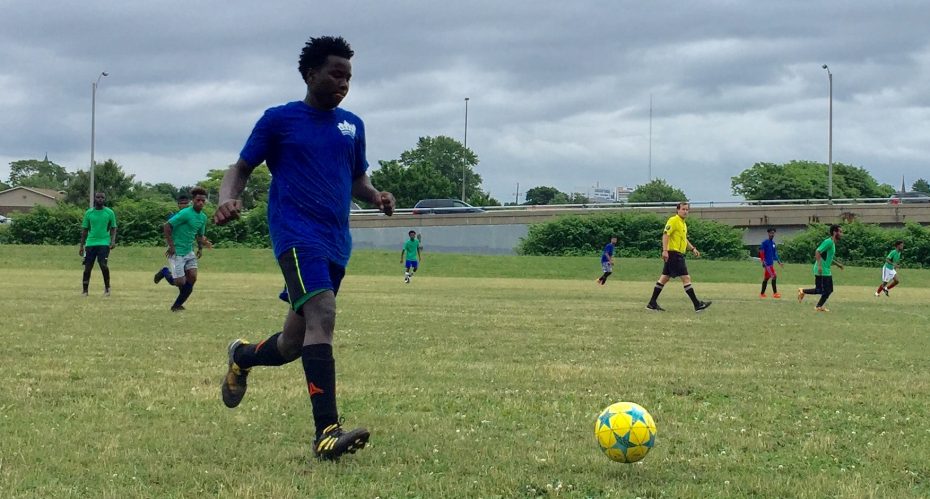 Majeed, an employee at the Buffalo resettlement agency, came to Buffalo from post-U.S.-invasion Iraq in 2008, when Journey's End workers met him at the airport. Three months later, the resettlement agency hired him to work as a housing specialist, and as time passed, he earned greater responsibility as a case worker.

"I do whatever [Journey's End] wants me to do," Majeed reflected at last summer's tournament. "They are my life."

That level of devotion was what propelled him to become the refugee team's first head coach - if only because he was the lone Journey's End employee with any soccer background. He'd played goalkeeper in college in Baghdad and, judging by his energy level on the LaSalle Park sidelines - an at times calamitous storm of encouragement and direction - he took his role as vocal presence quite seriously. (For the record, we're not sure he ever found a suitable left back). 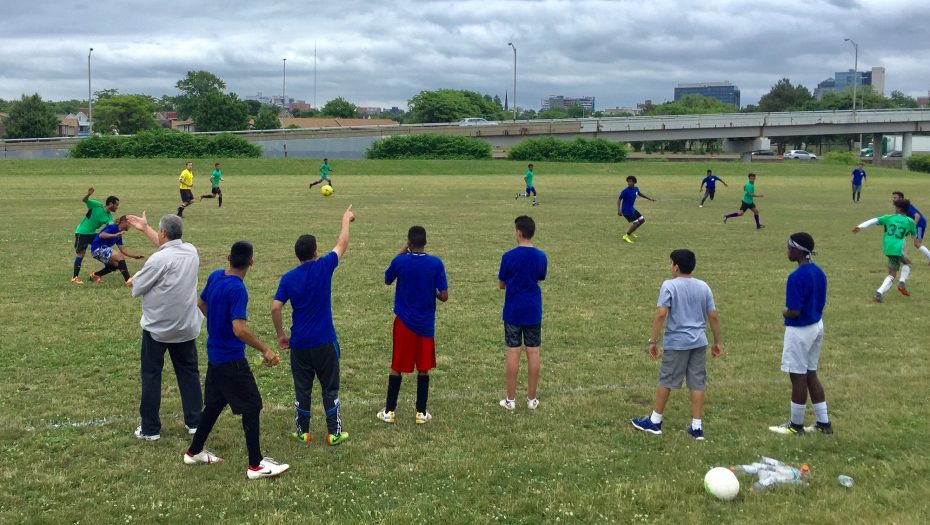 The Journey's End bench gets into the action late in the game vs. Eritrea, in 2018. (Ben Tsujimoto/News file photo)

But Majeed was essentially the final piece to a puzzle that took more than a year to solve. The refugee resettlement agency, headed by executive director Karen Andolina Scott out of the Tri-Main Building on Main Street, had toyed with the idea of starting a team the previous year, but an utter lack of equipment and organization stalled the quest. After all, the organization's mission is to help facilitate the transition for refugees to life in Buffalo - in education, careers, housing, finances and more - not construct soccer teams.

Enter Ernie Thalhamer, the founder of FC St. Pauli Buffalo, a small group of soccer fans who support a second-division German pro team, largely because of what the club stands for. His small contingent gathered locally for a rare screening of "Here to Stay," a documentary on the FC St. Pauli-sponsored refugee team, FC Lampedusa, based in Hamburg, Germany, and Thalhamer invited members of Journey's End to attend.

Journey's End outreach specialist Mackenzie Hafner delivered a short talk before the film, and she explained the predicament that the agency faced in fielding a World Refugee Day soccer team. 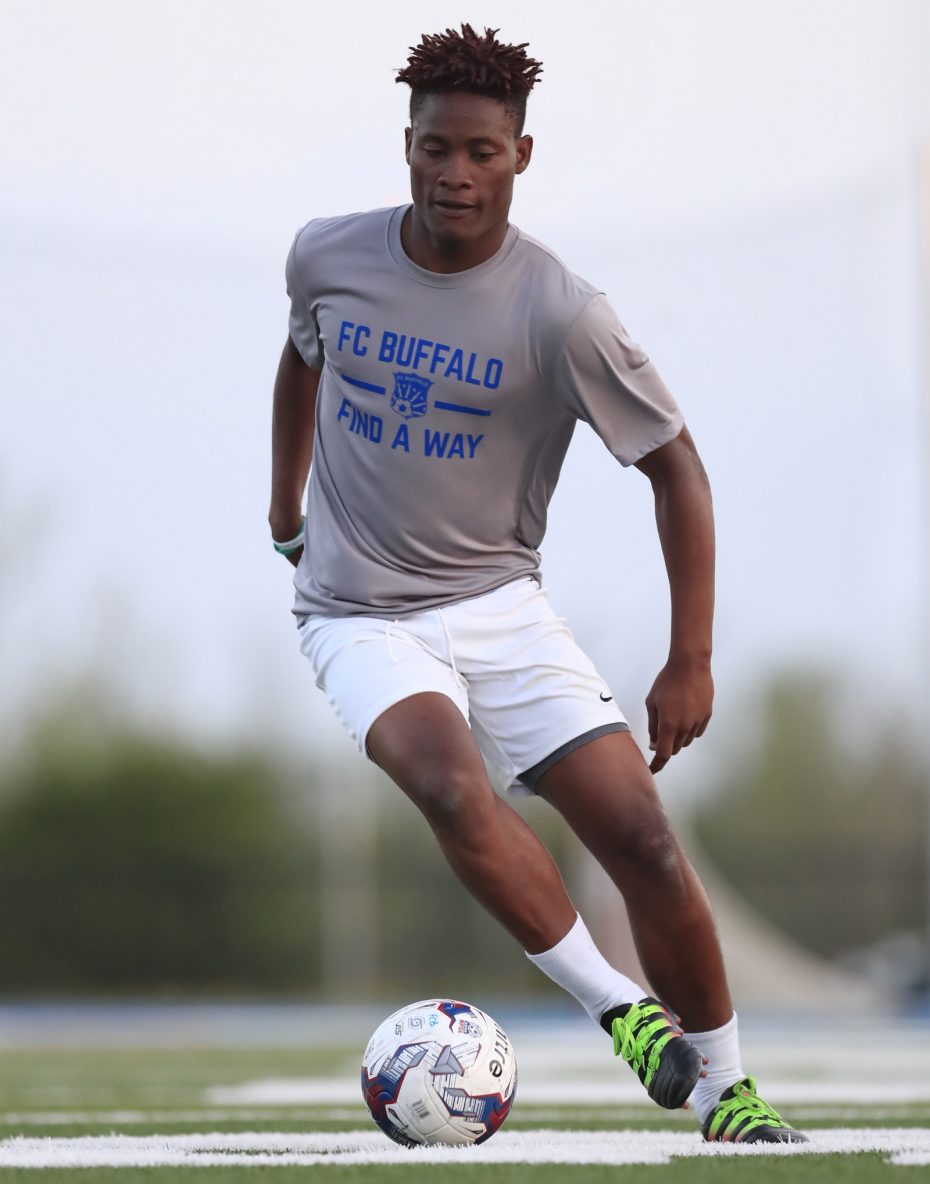 Former FC Buffalo striker Akean Shackleford - who knows poverty and difficulty in a foreign country well himself - donated roughly 20 pairs of shoes to the cause, shipping them from his community college in Iowa. The Buffalo State men's program supplied soccer balls and socks. Countless others pitched in, and suddenly the dream drew closer to reality.

"I come from a position of comfort, of being well off, and this was a really good opportunity to help people who really deserve to have a place to have fun, to enjoy themselves," Thalhamer explained.

As word of a possible team spread among students at Journey's End, which helps refugees earn their GED, interest increased to the point where Majeed had enough to field a squad. Training sessions ensued and a wide range of ability was apparent, with many relatively unfamiliar with the organized sport but comfortable kicking a soccer ball.

Perhaps more vitally, the tedious process of communicating on the field - with virtually no overlap in language among the players - began.

"English might not be everyone's native language, but once they're out there playing, it's hand signals, pointing, it's body language - they speak the language of the sport and don't need their native languages," said Thalhamer, who witnessed a few of the early gatherings.

While all of the Journey's End players weren't from the same country like other World Refugee Day tournament competitors - an obvious disadvantage - they were united by two things: a connection to Journey's End and the new, safer life that Buffalo represented. 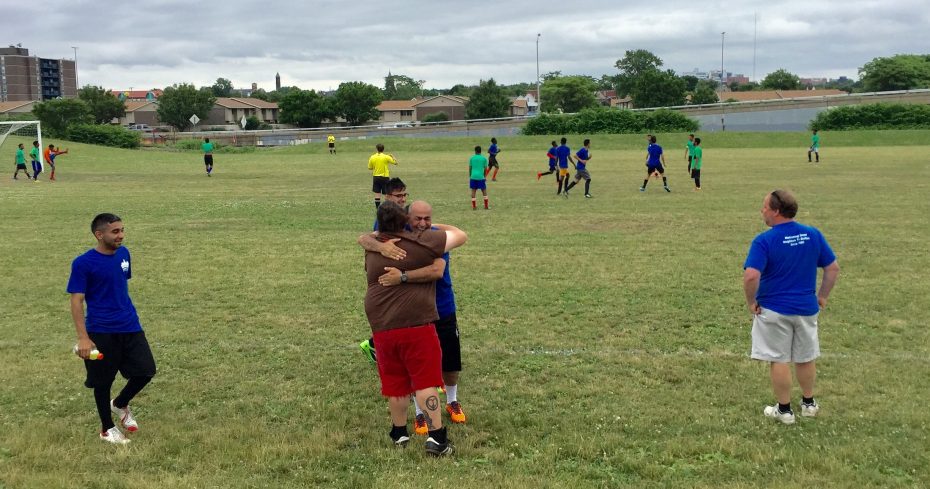 Even before last year's World Refugee Day, a larger project was in the works to tell the story of the Journey's End refugee soccer team. Thalhamer had connected with Religion of Sports, an eight-episode podcast that touched on crucial social themes that overlap with athletics.

Host Gotham Chopra, who worked with New England Patriots quarterback Tom Brady and NFL analyst Michael Strahan on the series, interviewed two Journey's End players - Mohammad and Burhan -  as well as Majeed, the coach. Listen to the 41-minute episode, below.

While the episode covers considerable ground, these were some takeaways:

• Just because refugees arrive safely in Buffalo and are given a chance to find their footing in a new country doesn't mean that life is suddenly easier. For both kids and adults, there's grieving over what was lost in their previous situation - often family members are left behind.

Those who arrive in the winter from Africa and Asia find Buffalo's cold climate especially unwelcoming, with the Journey's End players mentioning "isolation, depression and boredom" among the emotions after arriving.

• As if the challenges posed by their new environments aren't enough, the mental and emotional trauma experienced in their homelands can have powerful, lasting effects.

Chopra interviewed Dr. Heidi Ellis, a researched for the Refugee Trauma and Resilience Center at Boston Children's Hospital, for a window into the psychological struggles that refugees face, even after they've escaped to safer settings. It's an eye-opening segment.

• Being part of a team is something native Buffalonians might take for granted, whether it's at work, at school or in recreational activities. But for refugees adjusting, the experience is transformative. Ellis discusses the sense of identity established, a chance to sort through who they are as individuals within the context of a community.

"This isn't a refugee kid who lost everything," Ellis explains in the podcast. "Suddenly, this is a soccer player - on a team."

• The most stirring portion is teased in the beginning, as Journey's End refugee team captain Mohammad, who survived two of the most dangerous areas on the planet in Iraq and Syria, explained what the chance to play soccer meant to him.

"Sport is more than my life," he said in the podcast. "It's so good. I feel in my heart, in my brain, it makes me see the world, all of it, it doesn't matter the religion, the color, where they come from. We're all human, we're all from one God, you have skin, I have skin."

The 2019 World Refugee Day soccer tournament runs from 8:30 a.m. to 7:30 p.m. Saturday, June 29, and then 9 a.m. to 6:30 p.m. Sunday, June 30, in LaSalle Park. It's free to attend, with a volleyball tournament running alongside the soccer games. Sunday is the major cultural day, with a wide lineup of kids activities, ethnic foods, performers and more.

The Journey's End refugee team - now coached by Jeff Ogilvie, who assisted Majeed last year - will return for its second go-around, part of a 12-team field. They're not quite picking up from where they left off last year: Thalhamer explained that a few leaders from the inaugural team took on leadership roles themselves, organizing weekly practices in winter and spring so the team would be more prepared for 2019.

The inspiring side will play matches at 10:30 a.m. and 12:30 p.m. Saturday, with potential for more matches dependent on their success. The full schedule of games is available.