Mike and Rose Tucker have been collecting for years. He’s always been keen on old fishing gear, including lures, reels and creels. She’s fond of vintage kitchenware, such as utensils, gadgets and pottery.

These and other collections – folk art, antique furniture, architectural pieces – are artfully displayed throughout their renovated ranch on Grand Island.

The result is an interior that is comfortable, not cluttered, with interesting items to look at in every room.

The wood box hung high on a wall near the front entrance? It’s filled with old fishing lure boxes.

The planter on the wall in the dining room? It’s actually an old cast-iron garden fountain discovered at Muleskinner Antiques in Williamsville.

The Tuckers, both Niagara Falls natives, bought the house in 2011, right around the time their son, Derek, was heading to college. Their previous home was a large contemporary in Youngstown, and they had lived in three other homes before that.

In February 2018, the Tuckers’ ranch was featured online as a Buffalo News’ Home of the Week, after the couple submitted photos and described the place.

For the feature, the couple said they love the home – about half the size of their former home – “because of its waterfront access, practical layout, manageable size and convenient location.”

They described their decorating style as “a combination of Early American/country/rustic/cottage/Adirondack.”

Earlier this month, the News visited the Tuckers for a tour, interview and photo shoot. 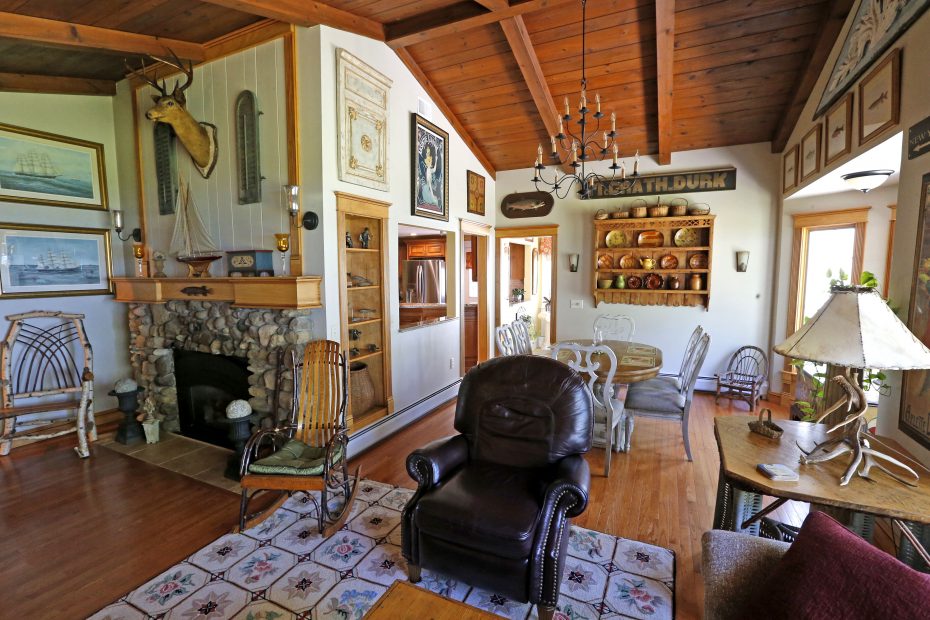 The living room features a stone fireplace and pine ceiling with beams. Mike installed the hardwood floors with the help of his father and father-in-law. (Robert Kirkham/Buffalo News)

While the kitchen and master bath had already been remodeled when they bought the house, the Tuckers renovated the rest of the ranch, which was built in 1965.

They installed new flooring, trim, wainscoting, windows and lighting. They repainted rooms. They also did some exterior work, including updating the patio and landscaping.

Mike Tucker, a retired environmental toxicologist, did much of the work himself, with help from his father, Ed, and father-in-law, Joe Giancola.

• Mike and his father built and installed the pergola above the hot tub in the back. The stone path was another do-it-yourself project. Mike also built the exterior shutters.

• Mike built the fireplace mantel in the living room and installed the tin ceiling in the dining room. He also built the table in the eating area using wooden legs he bought for $5 each at a flea market 10 years ago. He built a platform base and attached the legs to a tabletop he purchased for $99. He refinished the legs using a chalk-style paint.

• After replacing the old paneling in the sun room with wainscoting, Mike used the wood to build multiple picture frames for a large map of the Niagara River (he’s a member of the Niagara Frontier Underwater Explorers Club) and his poster collection of 1970s musicians. (He plays the guitar and mandolin.)

“He’s good at repurposing,” said Rose Tucker, who tends to the gardening. A retired accountant, she was assistant director of finance in facilities at the University at Buffalo.

Mike said that while their style has evolved through the years, they have always appreciated quality craftsmanship. 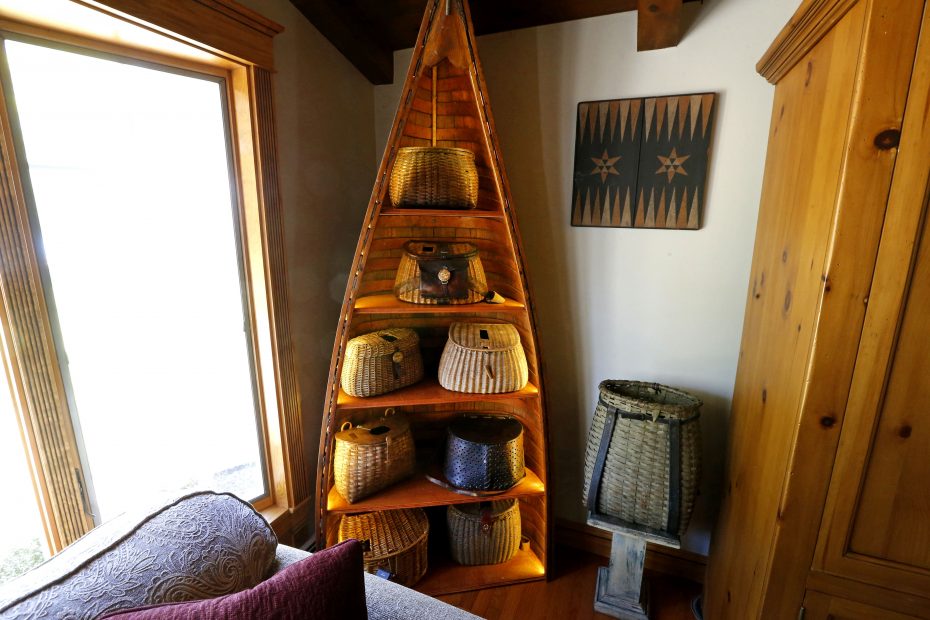 Mike Tucker made a bookcase from an old canoe he found on Craigslist. They use it to display old fishing creels and Adirondack baskets. (Robert Kirkham/Buffalo News)

The house at a glance:

The Tuckers have updated their ranch overlooking the Niagara River and decorated it with antiques, artwork and collectibles. Here’s a peek at the place:

Furniture: Antiques; hand-painted pieces; new sofas and ottoman in living room; several designs by Mike Tucker, including two bookcases he made from an old canoe. Some pieces are from places they visited, such as an Adirondack chair from Lake Placid, N.Y., and handcrafted Windsor chairs from Maine.

Do you love your home? Tell us about it

One of the most popular features in The Buffalo News Home & Style section is the Home of the Month, which features a local home and the people who live there. Today we feature the Grand Island home of Mike and Rose Tucker.

Our Home of the Month appears online – along with a gallery of photos by a News staff photographer – as well as in a print edition of Sunday Home & Style. (This story will appear in print June 30.)

In fall 2017, we launched another feature that appears online only – the Home of the Week. This lets readers inside even more Western New York homes.

Like the Tuckers' home, the residence also could be chosen as a Home of the Month.

Here’s what to do if you’re interested: Tell us about your home in 150 words or less, and email 10 hi-res images (in JPEG form) to homeandstyle@buffnews.com. It’s OK to send the images split among several emails. Please include your name, the city or town where you live and a phone number.

We will contact those chosen to be featured on BuffaloNews.com. We will include your name and the city or town in which you reside but not your exact address or phone number. We also will publish online some or all of the photos you submitted.

If your place is chosen for Home of the Month, we will visit your home for an interview and our own photo shoot.