A pair of veteran paddling instructors will help open the quiet bends of the Buffalo River to more exploration.

Jeff and Laura Liebel, husband-and-wife owners of Wekanu canoe and kayak instruction, will join forces with RiverWorks next week in a new venture called Buffalo Paddleworks.

The business – centered this year at the east end of the 1,000-foot-long RiverWorks dock – will rent kayaks and canoes, teach paddling safety courses and provide tours that head upriver, as far as the Seneca Bluffs boat launch and Cazenovia Creek in South Buffalo.

“The ultimate goal is to get more instructors to help people out who are new to paddling,” Jeff Liebel said. “With all of this activity on the river, now is really the time to have some permanent presence around instruction and safety, and also guided tours.”

Next summer, home base will be about 2.5 miles upriver at the new RiverBend complex, where construction is expected to start soon on federal and state funded trails, docks and shoreline improvement, as well as a $6 million restaurant, paddling service and entertainment complex operated by the Pearl Street companies, which include RiverWorks.

The long-term strategy of Paddleworks and others with interests along the 8-mile river is to improve public access, as well as safety, particularly on the lower portion, which includes Canalside. On summer weekends, especially, that section teems with recreational boaters, paddlers and, on occasion, 500-plus-foot freighters that serve ADM, LaFarge and other silo-based businesses within two miles of the Buffalo Harbor.

“The idea of RiverBend is that by virtue of putting in a large paddle sport operation like this up there, and having all of these facilities available up there, too, that we’ll be able to move a lot of that traffic up the river,” Jeff Liebel said. “Once you start to get up there, you can get into areas with a much more natural shoreline. It’s almost like a wilderness paddle up in there.”

You have Tifft Nature Preserve on the way to RiverBend, Laura Liebel said, “so the chances of seeing wildlife – eagles, beaver, otters – is good.” 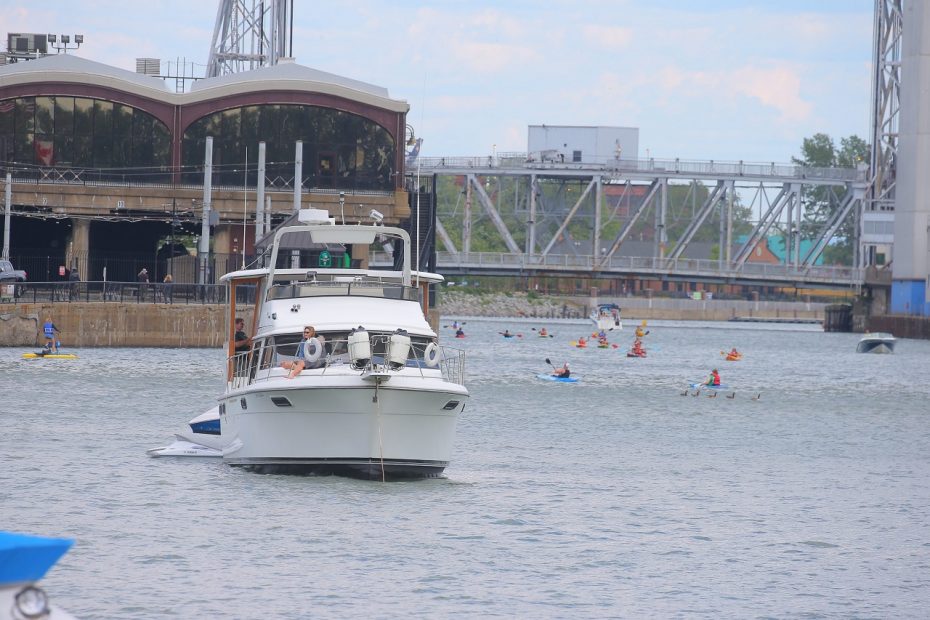 Supporters of the RiverBend project believe it will help ease congestion and improve safety in the lower Buffalo River, in and around Canalside. (News file photo)

The stretch of the river beyond RiverWorks is considered part of the Buffalo Blueway, funded by Empire State Development and planned and developed by Buffalo Niagara Waterkeeper. The nonprofit has added two launches at RiverWorks – including a first-of-its kind adaptive waterfront dock –  led the way on parks and launches at other key points, including RiverBend.

The latest developments are part of an ongoing $48.5 million remediation of the once industrial dumping ground that started in 1987. The federal Environmental Protection Agency and Honeywell has covered the vast majority of the costs, with input and support from Waterkeeper, the U.S. Coast Guard, Erie County and the state Department of Environmental Conservation, among others.

Buffalo Paddleworks will operate the existing kayak and stand-up paddleboard rental business at RiverWorks, and add Old Town kayaks and tandem kayaks and canoes to the offerings. Rates range from $20 an hour to $60 a day, with discounts for Independent Health members.

Within the next week, Paddleworks will add tours that explore the upper six miles of the river, including specialized trips for fitness buffs, women, “Gray Bladers” age 55 and over and, longer-term, paddlers with special needs. For more information and updates, visit buffalopaddleworks.com.

“By the time next year comes around,” Laura Liebel said, “RiverBend will have a model.”