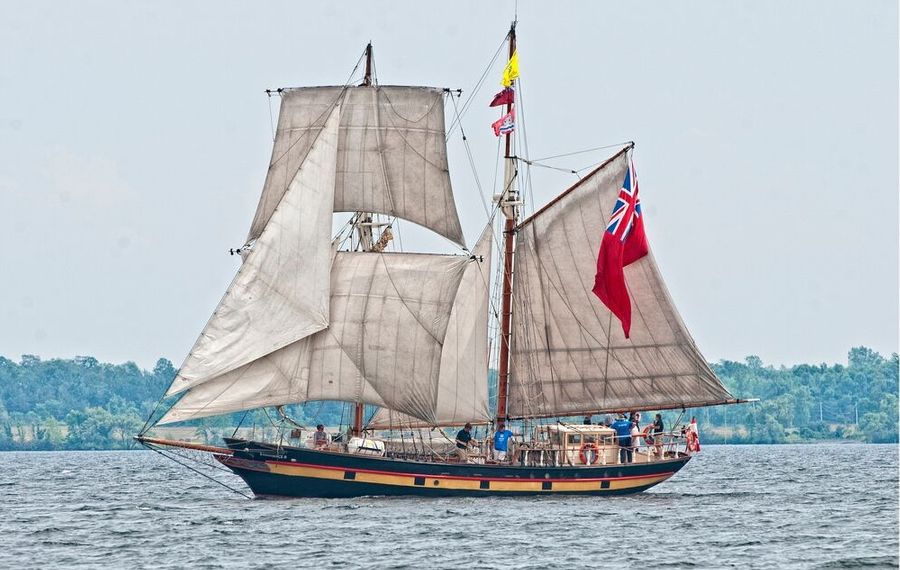 Virginia’s Chesapeake Bay seems like an odd place to hatch a plan for heightened appreciation of Buffalo’s maritime history.

Not for Mike Vogel and Paula Blanchard, the chair and co-chair of the forthcoming "Basil Port of Call: Buffalo," a four-day family event that will bring the most dramatic tall ship fleet to the city’s waterfront since the Erie Canal’s 1800s heyday.

On July 4, a dozen vessels from four different countries will arrive from Toronto as part of the Tall Ships Challenge Great Lakes race, line the Erie Basin Marina for tours and cruises through July 7, then continue to the race’s next stop in Cleveland.

While here, the event will give people the chance to board (and ride) the vessels, see historic exhibits and take part in family activities.

It’s a tremendous opportunity to welcome a breathtaking flotilla to Queen City shores. But in 2015, it was Vogel, Blanchard and their spouses, relaxing off the coast of Old Dominion, sipping wine, and on the Blanchard family vessel, agreeing to make this event a reality.

“Tall Ships America has wanted Buffalo to be a host port [for the Tall Ships Challenge] for decades,” said Blanchard, who moved from Norfolk, Va., to Buffalo with her husband, Tom, in 1990. “We were never able to make it happen until now because we needed the organization and commitment of the people who really wanted to do this.”

And that started with Blanchard and Vogel, who have spent most of their lives connected to the majesty of maritime history in Buffalo and elsewhere. 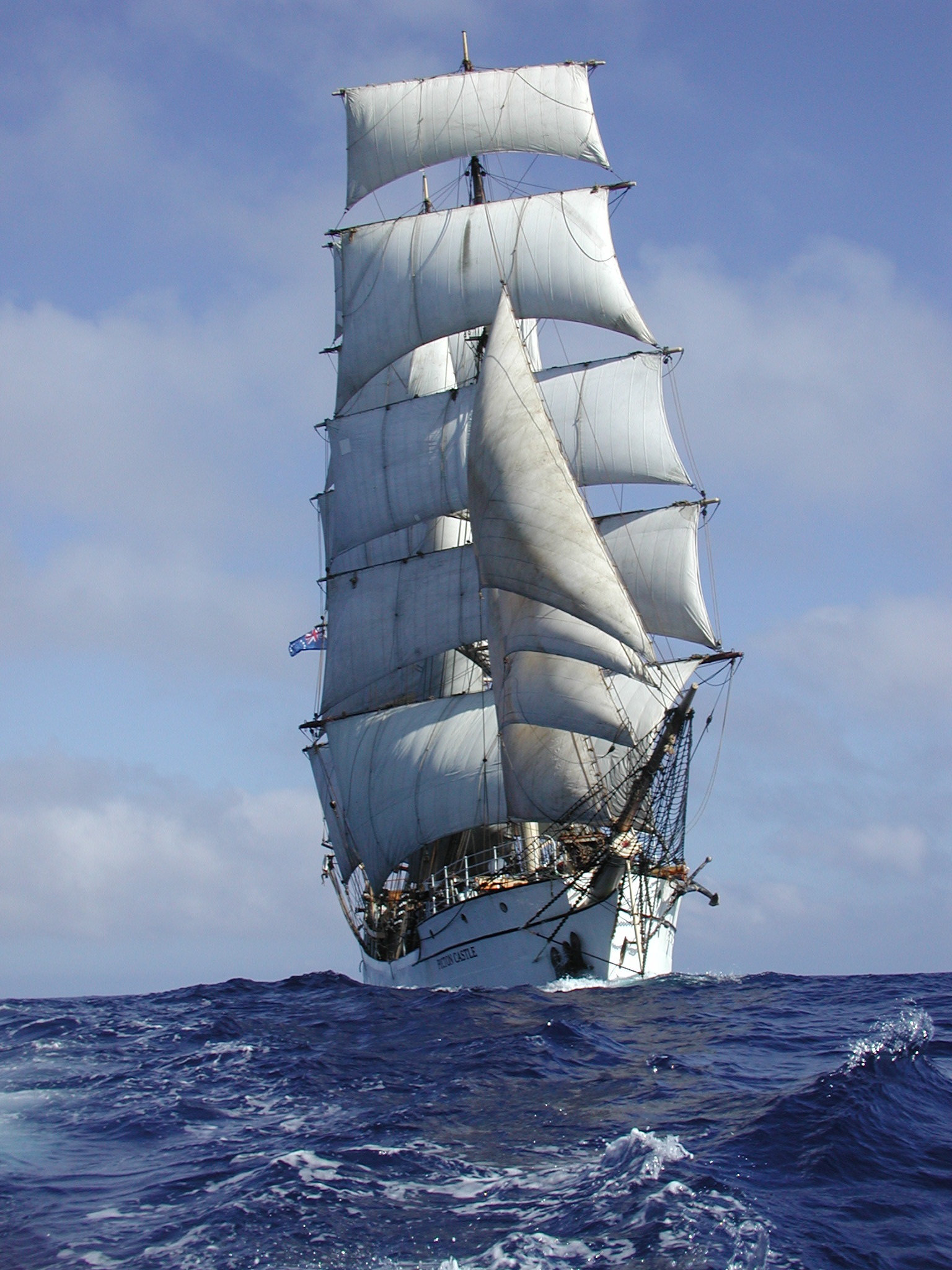 The Picton Castle is a stunning sight under full sail. It is taking part in "Basil Port of Call: Buffalo" activities.

Blanchard has been a tall ship enthusiast since her days in Norfolk, when saw two- or three-mast tall ships along the city’s busy port at least every other week. Her work with Norfolk's Harborfest celebration accentuated that affection, as the annual Town Pointe Park event included tall ships as part of its celebration. When she relocated to Buffalo, she brought that interest with her — and it was easy.

Tom Blanchard was brought to Buffalo to help develop the city’s waterfront, and through his eventual work with the Erie Canalway National Heritage Corridor Commission and Erie Canalway Heritage Fund, helped assure continued development of Canalside.

Through Tom’s work, Paula met Mike Vogel, president of the Buffalo Lighthouse Association, and a former reporter and Editorial Page editor for The Buffalo News. An assignment on a Great Lakes excursion aboard the Norwegian tall ship Christian Radich in 1976 initiated a love of maritime history, especially Buffalo’s.

“An absolute river of immigration came westward from the New York port to Buffalo during the 1800s, and everything produced by the Midwest for the world—from lumber to grain to coal to iron ore—came back through Buffalo," said Vogel, whose involvement with the Buffalo Lighthouse Association stretches back to 1985. "[The city] has an international reputation because of the Erie Canal.”

And until the excavation and rewatering of the canal’s western terminus in 2008, that international reputation attached to the id of America had been mostly relegated to museums, history books and Bruce Springsteen covers.

“The port built the City of Buffalo, and for years, Buffalonians and Western New Yorkers in general turned their backs on the urban waterfront,” said Vogel. “It was desolate and industrial. But now that that’s changing, I think it’s time that we connect Buffalo to its own story.”

That’s what "Basil Port of Call: Buffalo" aims to do. In conjunction with Tall Ships America, 30 steering committee members and more than 800 volunteers, the event will finally provide the Challenge a stop between Toronto and Cleveland, all while recalling a time when majestic tall ships regularly pulled into Buffalo’s port to pick up a litany of goods for voyages across the Great Lakes.

Twelve ships — hailing from the United States, Canada, Spain and the South Pacific — will first parade along the city’s Outer Harbor in the late afternoon of July 4, then take their places along the Inner Harbor’s edge for the remainder of their stay.

Since the first Tall Ships Challenge races in 1998—held every three years, and established to help crews and trainees work their vessels under lake-faring conditions — associated "Port of Call" events and festivals have generated an estimated $1.6 billion economic impact for host cities in the U.S. and Canada. Organizers of the Buffalo stop anticipate a $6 million to $8 million economic impact from this event, one that in other similarly sized locations typically attract tourists from a four-hour drive away.

If all goes well, the city will have hosting rights every three years — which would include bringing another impressive tall ship fleet to town in 2025 to add to what plans to be a lengthy bicentennial celebration of the opening of the Erie Canal.

For now, there’s this year’s gala, and its mission to awaken an element of Buffalo’s narrative that can be reinterpreted for generations that have longed to envision the kind of watercraft the city once hosted in its most booming of boom days. And for four dates in July, it will reintroduce those generations to what Buffalo once was — all from the vibrant waterfront the city’s reclaimed for its present and future.

“This sense of place is critically important to the attitude and psychology of Buffalo, which for years had its own negative self-image, and fed on that,” said Vogel. “We’re turning that around nowadays with all the development, hope and optimism, and that has to be sustained. To sustain it, you need events like this [with an] economic impact like this. This is part of the building process for Buffalo in the 21st century.” 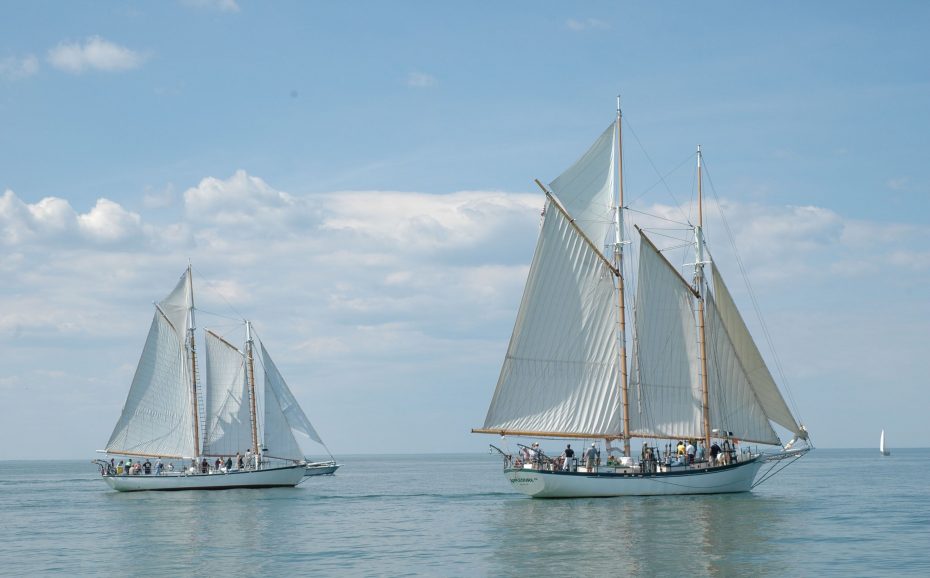 The Appledore IV and V will be available for "sailaway" excursions during "Basil Port of Call: Buffalo." (Avram Golden Photography)

Heading down to Canalside for Basil Port of Call: Buffalo from July 4 to 7? Here are the details of the majestic ships.

Barque Picton Castle (Cook Islands). Once a Welsh fishing boat that served as a British minesweeper during World War II, the Rarotonga native is now an impressive 179-foot steel vessel.

Empire Sandy (Canada). A 203-foot schooner from Toronto that once saw service with the British Navy, it’s the largest vessel set to dock in the Buffalo fleet.

Nao Santa Maria (Spain). A new replica of the flagship of Christopher Columbus’s famous exploration fleet, it was built in the Spanish province of Huelva during the 525th anniversary of the 1492 voyage.

Bluenose II (Canada). With its image depicted on coins in its native Canada, it may be the most recognizable ship in the fleet. If not, just notice its 130-foot mainmast, the tallest in this year’s rendezvous.

US Brig Niagara (U.S.). A reconstruction of Commodore Oliver Hazard Perry’s historic flagship from the Battle of Lake Erie in the War of 1812, it’s based in Pennsylvania, and is a frequent visitor to Buffalo.

Pride of Baltimore II (U.S.). First launched in 1988 to replace the original Pride of Baltimore — which was lost at sea in the Caribbean in 1986—the clipper-style schooner is a sailing ambassador for the State of Maryland.

STV St. Lawrence II (Canada). A 72-foot steel brigantine operated by a crew of teenagers in sail-training programs, the Kingston, Ont. native was once a local guest of the Buffalo Lighthouse Association in the 1980s.

HMCS Oriole (Canada). Built in 1921, it’s the oldest commissioned ship in the Royal Canadian Navy, and now serves as the sail-training vessel for the Navy in its home n Halifax, Nova Scotia.

Appledore IV (U.S.). A steel-hulled 85-foot gaff schooner, its based out of Bay City, Mich., and will offer day and evening sailing excursions during its time in Buffalo.

Appledore V (U.S.). Like its brethren, it’s also a gaff schooner, a native of Michigan, and available for sailing adventures while docked in the Erie Basin Marina.

Spirit of Buffalo (U.S.). The host vessel of the entire "Basil Port of Call: Buffalo" is a 73-foot steel topsail schooner owned by Buffalo sailing adventures. It will be available for Great Lakes exploration throughout the four-day extravaganza.

Festivities begin at 2 p.m. July 4 as the ships gather in Lake Erie at "muster point"; the Parade of Sail follows at 3 p.m. and the ships arrive into the harbor at 5 p.m. for docking at Canalside, Riverwalk/Erie Street, and Erie Basin Marina. There will be July 4 activities at Canalside throughout the day. Gates open to the public at 11 a.m. July 5, 6 and 7 at Canalside.

Tickets are needed to board and visit the tall ships. These passports, or one-day vouchers, are $20 for adults, $18 for seniors/veterans, $10 for children 11 and younger. Excursions to "sailaway" on one of three tall ships also are available for an additional cost. For details and ticket info, visit portofcallbuffalo.org. Tickets are also at Wegmans.