Home waters in a fishing tournament can mean a lot. No American team had ever won the Budweiser Can-Am Walleye Challenge, a one-day shootout that allows teams to bring their best four walleyes to the scales. At least, that’s the way it was for the first five years.

That all changed last Saturday when the Forever Fishing Team dropped off their cooler at the weigh site and watched the digital readout show 38.65 pounds of fish for first place.

For the Forever Fishing team — Bob Rustowicz of Cheektowaga, Tom Brunn of South Wales, Steve Ball of Alden and Gregg Shelvay of Hamburg — it was about doing their best in an event that they enjoy fishing. This year, 92 teams competed in the contest run out of Sugarloaf Marina in Port Colborne, Ont. Only six teams were from the United States.

Rustowicz, the team leader, has been fishing tournaments on the north shore of the lake since 1987, when the tournament scene began. It started with a tournament at Bertie Bay Marina in Point Abino and the 444 Tournament out of Port Colborne. The latter event ran for 30 years until it was discontinued last year. Six years ago, the Can-Am Challenge was started by Erie Tracker Outfitters of Port Colborne, and they’ve run an excellent event ever since. Entry fee was $500 per team this year with a 100 percent payout to winning teams.

Unlike going out and catching a big fish in a derby, a tournament requires consistency and size. Having anglers like Rustowicz and Brunn on the team is a definite advantage because they eat, sleep and breathe fishing. Finding a photo of Rustowicz without a fish is difficult, but not impossible. That said, it will probably feature a deer or turkey instead. 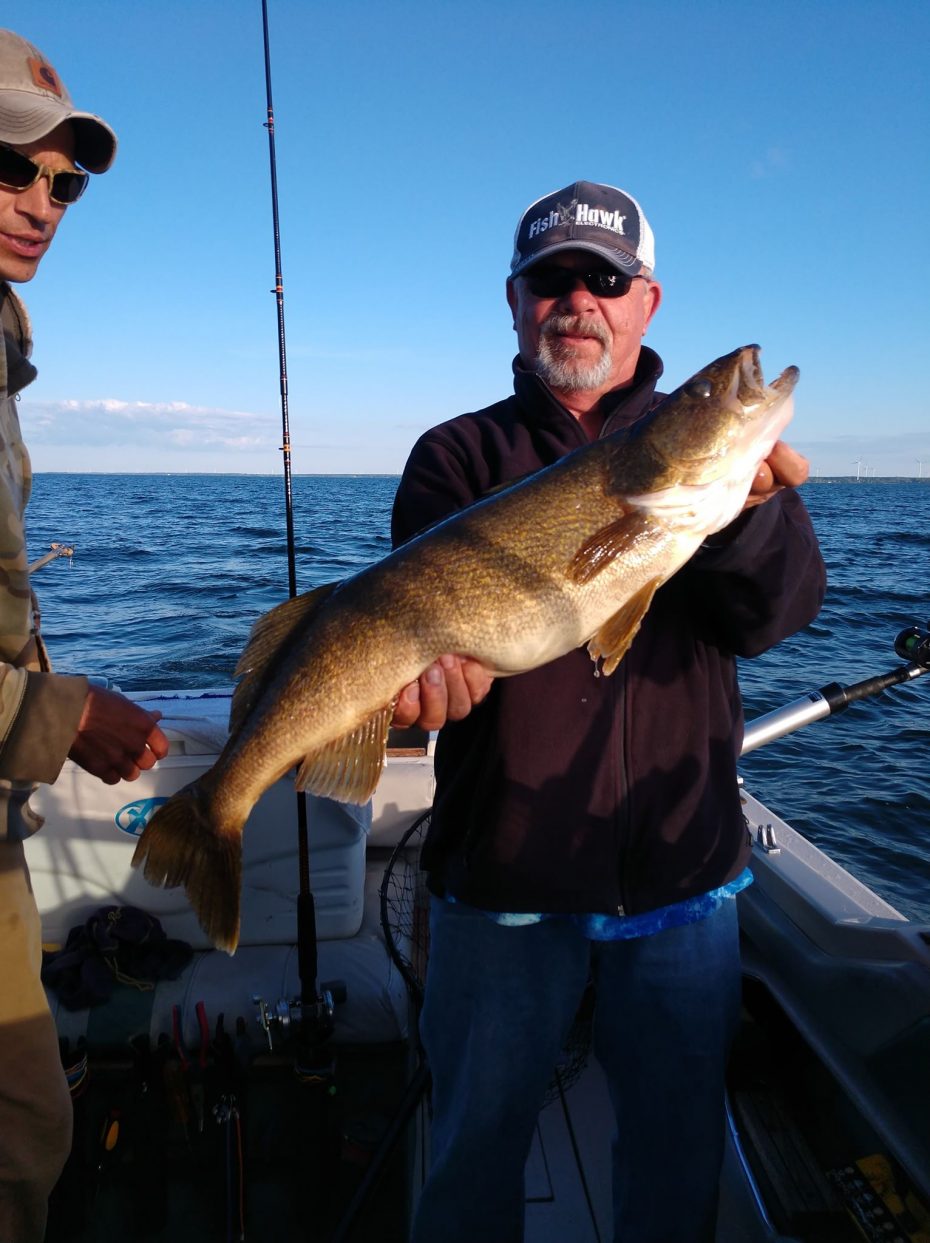 Bob Rustowicz of Cheektowaga with one of the team's four best walleyes in the Budweiser Can-Am Tournament. Rustowicz led the first American team to win the event. (Photo courtesy of Bob Rustowicz)

Knowing the waters that they would be fishing takes research.

“We found a small reef pre-fishing last week in the Maitland area near the Grand River that was holding some bigger fish,” Rustowicz said. “That was where we focused our efforts, about a 20-mile run to the west from Port Colborne. It paid off.”

As far as a program, braid line was used with diving baits to get them into the 18- to 24-foot fish zone. The team set the baits 80 to 100 feet behind inline planer boards. Best lures were Hot-N-Tots and Berkley Flicker Minnows in perch color patterns, working the reef over to find bigger fish. Some were suspended and some were on the bottom.

Tournament angling action showed off an impressive display of trophy 'eyes for this event. Between the Big Fish Friday and the main event Saturday, there were 11 walleyes that weighed 11 pounds or better and one tipped the scales at over 12 pounds. No one knows how many fish at better than 10 pounds hit the scales.

For the Big Fish of the tournament, the Keep 'er Tight team led by Alex Baptist took top honors with a 12.07-pound walleye, earning a check for $2,760. Second place was the Forever Fishing Squad with an 11.97-pound fish, and another check – just 0.10-pound off the leader and good for $1,840. 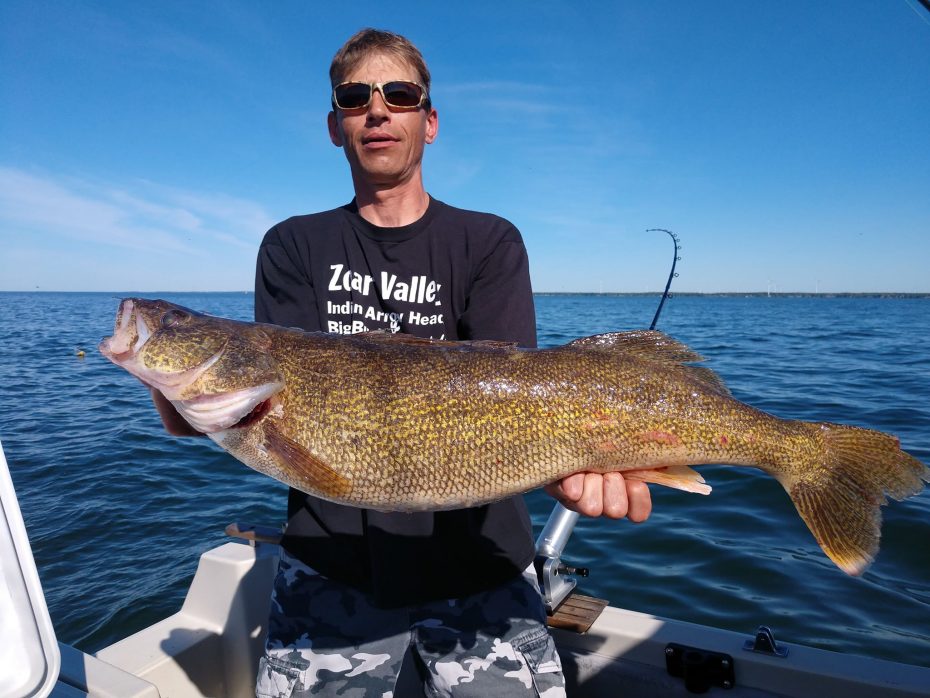 There was also a Big Fish Friday event as a precursor to the main event Saturday. Top walleye for Friday was an 11.82-pound fish reeled in by Mike Fletcher and the Yaleye-Fish team, earning $4,300 for the top prize. The top four fish were all over 11 pounds. Forever Fishing cracked the Top 10 with a 9.50-pound 'eye, not tipping their hand at the pocket of big fish that they were saving for the big event. All told, for both days, the FF squad won more than $20,000.

Rustowicz and company are about fishing for fun, but they enjoy the competition against other teams.

“I’d love to see more American teams fishing over there, and I’ve had a talk with Mark Mohr, who runs the Lake Erie Big Dawg Tournament out of Dunkirk, which just happened to be the same day this year,” Rustowicz said. “Hopefully it will give both tournaments more boats and ultimately a bigger field for a bigger payout.” It would also give the Forever Fishing Team another contest to fish.

“We’re very good at what we do,” said Captain Bob, who at one time was a charter captain on Great Lakes Erie and Ontario. But he needed to relax and take it easier. It’s all fun now.

“I always say we are blessed to live in this area if you’re an outdoorsman. The fishing is second to none. Having Lake Erie, Lake Ontario and the inland lakes around here, along with all the tributaries, we are in fishing heaven. I’m a multi-species fisherman. I love fishing anything with gills.”

Next on the Lake Erie fishing tournament docket is the Sunset Bay Walleye Shootout on July 19 for Big Fish Friday and July 20 for the main event. It’s a shotgun start at 7 a.m. for the Saturday tournament. Live weigh-in begins at 4:45 p.m., and it will be a fun spectator event. It’s the biggest payout of any Lake Erie tournament in New York. Rustowicz and his Forever Fishing team will be there.