The Buffalo & District Soccer League season has surpassed the halfway mark, and story-lines abound. Few will be surprised to see BSC Raiders and Amherst Sharpshooters at the top of the table, and one of the teams promoted from the championship division - Pendleton United - still win-less.

But the first seven weeks of the season have been littered with surprises, with a smorgasbord of breakout players, overachieving teams and even some puzzling underachievers, for whom everything has gone wrong thus far. And that's certainly messed with our preseason predictions.

Here are 10 fairly disjointed thoughts on what's happened so far this campaign.

1) The Yemen surprise: Taha Omar has built a team that's absolutely frightening on the counter attack, but stiff enough defensively to weather the onslaughts of the division's top half.

Sitting pretty at 5-0-1 in league play, leading the league in goals (22) and recently knocking Sharpshooters out of Tehel Cup, Lackawanna FCY is for real, and the next goal is to earn a first-round bye in the playoffs. 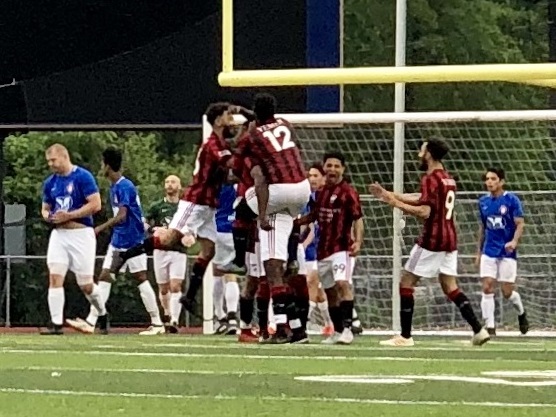 Shrewdly adding Zakaria Shaibi to the fold has compensated for the departure of his college teammate and last year's leading scorer Ali Shawish, who bolted for Sharpshooters. The McKinley High School product has potted nine goals in league play and two more in Tehel, and his sheer quickness and center of gravity are a nightmare for defenders.

Tack on the return of Ali Mohamed, the silkiness of Nageeb Ali and the wisdom of Mateo Escobar, and the lineup is scary.

The back four might be nervy at times, depending on attendance, but the leadership and steadiness of James Kpainay has kept them afloat, even in adversity.

[Related: Did you know the UB women's soccer coach is writing about the Women's World Cup?]

2) What's up with BUSS?: In some ways, you have to feel for BUSS. Orange Nation must be perplexed by the side's 1-3-3 start, good for eighth place in premier. We predicted them to finish second. Ouch.

A spate of injuries (Mo Musse, Josh Hammer, Al Franjoine, among others) has taken its toll, and BUSS at less than full strength has proven ordinary. Blowing a 5-0 lead over Clarence, where the Coyotes scored five unanswered to pull out a miraculous point, epitomizes the season for Bobby Calvaneso and Polo Suazo's group.

Better times are likely ahead, though, but last weekend's 3-1 loss to Lackawanna FCY does cement their place farther down the pecking order. It's entirely within reason that BUSS wins out and vaults into a playoff spot, but there's no room for error.

3) What's up with Wolves?: Sometimes mass changes during an offseason doesn't always produce ideal results. That's the case with Wolves, who've at times been victims of bad luck - but they've done little to help themselves.

It's hard to pick an area on the field in which they're excelling, and manager Andrew Renkas' first campaign in sole charge sees Wolves in a relegation battle with Southtowns and Pendleton United.

Adding Brandon Galanti, who played at Niagara and Buffalo State, should help with the finishing issues - they've scored just eight goals, second-fewest in the league, in seven games - but it's up to the midfield to raise its level in the season's second half.

4) Teams we just don't know what to do with: Queenston, Celtic United, Williamsville and Clarence are all enigmatic. That's just the reality of it; you're not sure what you'll get each week.

All are within reach of a playoff spot, but none has seemed fully committed to pouncing on it. Attendance and general motivation are chief concerns with some of these sides, and hey, after all, this is men's amateur summer soccer. No one is getting paid here.

5) The Yotes or the Coyotes?: Of the quartet, Clarence (3-2-2) seems best positioned for a berth in the postseason; we're guilty of underrating them in our predictions (ninth, woof).

Chris Berardi and Sam Sutherland have been productive and tough marks, while J.J. Hughes' value is much higher than the score sheet might indicate. Before winning by forfeit over Pendleton, Clarence conceded an unnerving 15 goals over the previous three games, and the defense will need to tighten up quickly. Their first two matches of July are absolutely massive.

6) How is Queenston's youth movement going?: The jury is still out on this one, and the final stretch of the season is daunting. Historically, the Parliament have a habit of lingering around the final playoff spot - and often sneaking in - but we don't see it this year.

The youth is enticing but still growing - Bryce Schiltz, Jake Westadt, Jared Burns, Trey Buscaglia, Marcus D'Aguiar and Joey Zachary will be the next wave of major talent in the BDSL, but they're not ready yet. Swiss Army Knife Ross Suitor has been forced to deputize at center back, which speaks to his versatility - but that's obviously not where Queenston would prefer to deploy him. 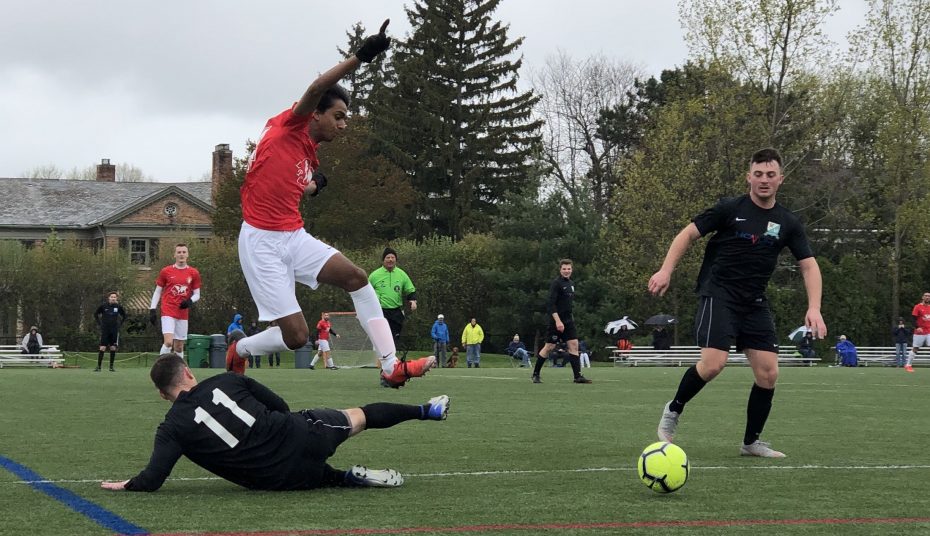 7) How close are Raiders and Sharpshooters?: These two adversaries played to a rather dull scoreless draw in their lone meeting of the regular season, which is not what we paid money for on a Sunday night (kidding, it was free, and we didn't actually go due to Good Morning, Buffalo fill-in duty).

In terms of depth and a mix of youth and veterans, Sharpshooters are the best built to contend with Raiders, whose physicality could give Lackawanna problems. Given his summer form, we give Amherst's Taha Ahmed (Clarence) a slight edge over Zachary (Lew-Port) for WNY Section VI player of the year next season, and omnipresent Derek Bartlo will be an absolute monster at Daemen College this fall.

8) But, Raiders, right?: Yeah, Raiders. They're still the team to beat, and it will take some combination of the following events for them not to win the league for a third-straight season: Injuries, apathy/poor attendance, extra-late Saturday nights or tumult within the team.

All of those could happen, but co-manager Anthony Johnson has brought this team together, and falling short in both of their regional cup competitions this spring should keep that competitive fire alive. That is not good news for the rest of the league. (For the record, Raiders went 15 consecutive BDSL games either allowing just one goal or keeping a clean sheet; that ended last Sunday vs. Southtowns). 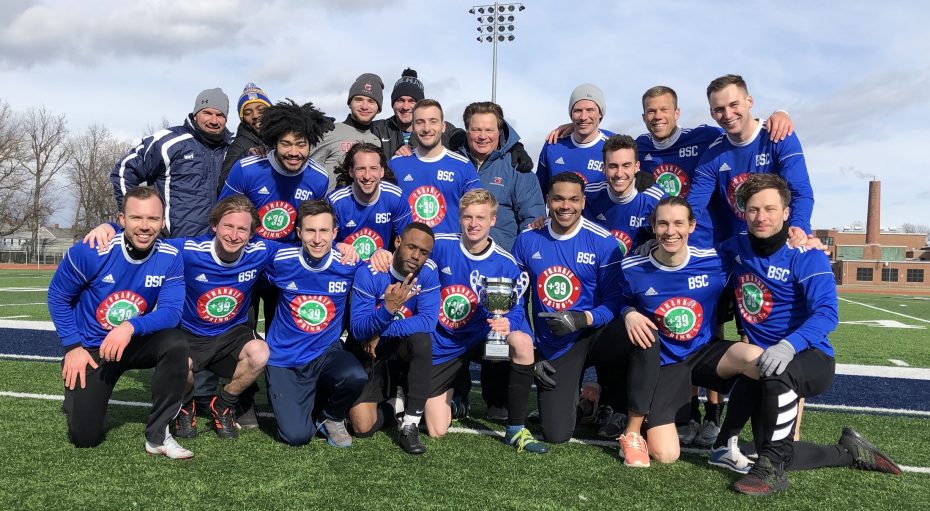 9) Hey, Inter, you're doing well, too: We had confidence that BSC International would stave off relegation in their first season back in the top flight, but a 4-1-2 record and current fourth-place standing exceeds our original expectations. Mo Hussein has been scoring goals for fun, with Jenaro Akeh a dynamic second fiddle. And fleet-footed Abdi Sabtow just came back from suspension!

Well-traveled Rahim Melon and goalkeeper Brian Arcara have anchored the defense, while Otto Boussag's five assists are a testament to his playmaking from outside back. This is a well-constructed team that deserves a spot in the postseason, but Raiders and Sharpshooters both loom on the end-of-season schedule.

10) Relegating relegation chatter: Look, it's not fun for a team to get sent to a lower tier, but that's life in a pro-rel league. Barring some unexpected movement, it's a three-dog fight between Pendleton, Wolves and Southtowns. PUFC's forfeit on Sunday is a bad omen for remaining up. That leaves Southtowns - which smashed Celtic United, 6-2, for its lone win - and beleaguered Wolves.

Southtowns added former Daemen midfielder Zakariah Hall and youngster Sajan Magar to the club, but losing Issak Sabtow and Kabura Elias indefinitely for disciplinary measures is not a good look. With Galanti in tow to bolster the attack, we give Wolves the nod to stay up.

As always, the Twitter accounts to follow are @OfficialBDSL, @BDSLRumors and now @BDSLPremierPost, which passes along comment from both managers after every premier division match. @BDSLGIFS adds banter, humor and, you guessed it, GIFS, to the fold so things don't become too serious.

There have been two episodes of a league podcast, too; if you have some time to spare, give that a listen. You can always follow us, too, at @BN_Soccer. We'll try to write more about the league in the coming month.