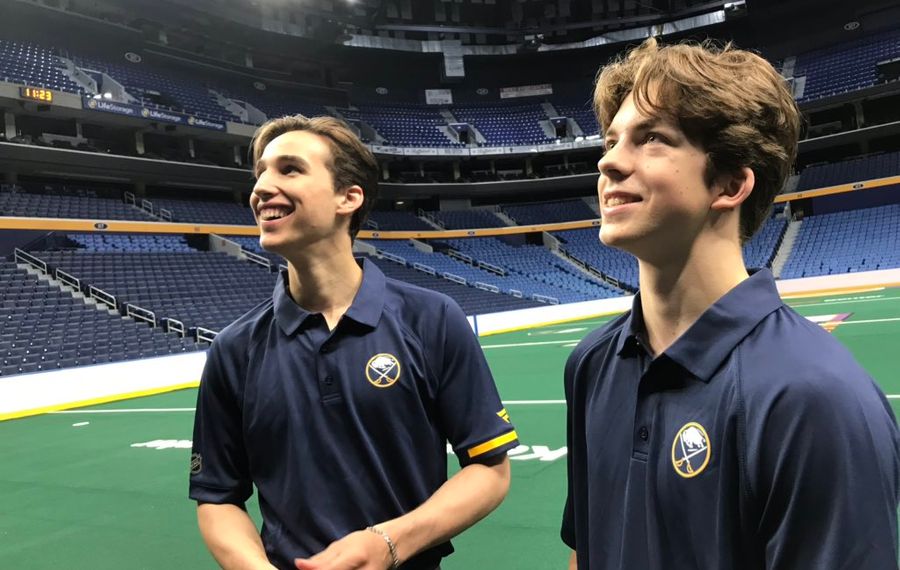 Dan Curtis is in the midst of his third term as the mayor of Whitehorse, the largest city in Canada's Yukon Territory. When he opened Monday's meeting of the city Council, his first key piece of business was left over from the weekend.

It was time to offer public congratulations to Dylan Cozens.

The Buffalo Sabres made Cozens the No. 7 overall pick of the NHL draft Friday night in Vancouver, and that's the highest any player from the Yukon has ever been selected.

"The whole city erupted," Curtis said Tuesday by phone from Whitehorse. "Social media went nuts. People were calling everybody. Everybody felt like it was their own son, own brother, blood relative who was taken. It's absolutely huge for everyone. People have been watching Dylan for a long time. We're so proud of him and his family for the sacrifices they've made to this point."

When he was introduced to Buffalo media on Tuesday, Cozens was asked about the impact of his draft on his hometown.

"It's lots of people saying how Buffalo got 35,000 new fans," Cozens joked in KeyBank Center, referring to the territory's population. "Everyone is supporting me and it's going to be most of Whitehorse's new favorite team so it's pretty cool."

Cozens and fellow first-rounder Ryan Johnson were introduced Tuesday and will be marquee attractions as the Sabres open their annual summer development camp Wednesday afternoon at 1 in HarborCenter.

"I'm excited for my first NHL camp," Cozens said. "It's something I've dreamed about for my whole life so to finally be here is very exciting."

Curtis said there were draft watch parties across town keeping tabs on Cozens. His own communication manager was camping but made sure to tune in via Skype.

"I was glued to the TV with friends and there were people all over in the restaurants and bars watching," Curtis said. "Dylan is such a role model. He's very gracious and generous with this time. We were all tuned in to see how he did. I would have been as proud to be top 25 or top 50. For him to be in the top 10 was more than anybody could have wished for. We were hopeful but trying to keep our expectations tempered.

"He's a great person, a great talent. We've had Olympians from the Yukon and people who have achieved. But as far as being recognized, this is the top of the heap."

Cozens has been on a whirlwind schedule, coming directly from Vancouver on Sunday. And he hasn't been anonymous here the last couple of days.

"Being in the city, walking around and people recognizing me is pretty cool," Cozens said. "It's definitely setting in that I'm starting to live my NHL dream. I'm just walking and they're like, 'Are you the first-round pick?' and I'm like, 'Yeah'. Just talking, congratulations, shaking my hand. It's definitely a hockey town. You can just tell by everything they want to win and they're hungry for success."

Cozens, in fact, has equaled the highest point in the draft for any player in history from Canada's territories. Greg Vaydik of Yellowknife in the Northwest was drafted No. 7 in 1975 by Chicago. Folks in the Yukon had high hopes of a Top-10 selection and were prepared to root for whatever team did that for Cozens.

"Lots of people being so close, it's Edmonton and Vancouver," Cozens said, when asked who people generally root for back home. "But it's changing now to Buffalo."

The Mayor of Whitehorse concurs.

"We have a lot of Boston fans, Habs fans, some Toronto fans. We have quite a melting pot," Curtis said. "People come from across Canada and bring allegiances with them. But I know they've already made a real shift.

"I've always been a Canucks man – but I've definitely switched over to the Buffalo Sabres, too."