The Erie Canal, in all of its bicentenary beauty, connects Albany to Buffalo through its man-made, 363-mile long waterway. Once responsible for New York State's booming industrial economy, the canal has more leisurely responsibilities these days, serving casual boaters, bikers, strollers and mean Canada geese.

Our curious predispositions to take things for granted sometimes results in an underappreciation for what we already have. Touring canals in Venice? Take my money. Touring the Erie Canal? ... Sure.

No offense, DeWitt Clinton, but Venice has Western New York beat as far as canal beauty goes. However, on a clear, summer day, when the murky brown water gives the illusion of being blue, the trees dangle over the towpath and the geese aren't chasing you away, the Erie Canal is beautiful. Through the right lens, it looks like something Claude Monet would have appreciated, or Charles Burchfield would have painted.

The three port towns in this guide, while they barely scratch the canal's 363-mile long surface, create a kind of smorgasbord of small-town living close to home. The food is cheaper. The attractions are sometimes eccentric. Connecting them all is farmland, a few stoplights and (nearly) 15 miles on the Erie Canal.

Literary icon Joyce Carol Oates was born and raised in Lockport. It's a place she credits for shaping her writing and sense of place in many of her fictional stories. Given Oates' successful career as one of the great modern American authors, that's quite an impact.

Located in Niagara County, Lockport is a small city (population: 20,000ish) with enough of its own character to feel different from the surrounding towns and villages. Lockport doesn't always get enough credit for being its own destination, which it is with the Erie Canal, mammoth mansions built during more affluent glory days and cafes, ice cream shops and restaurants. 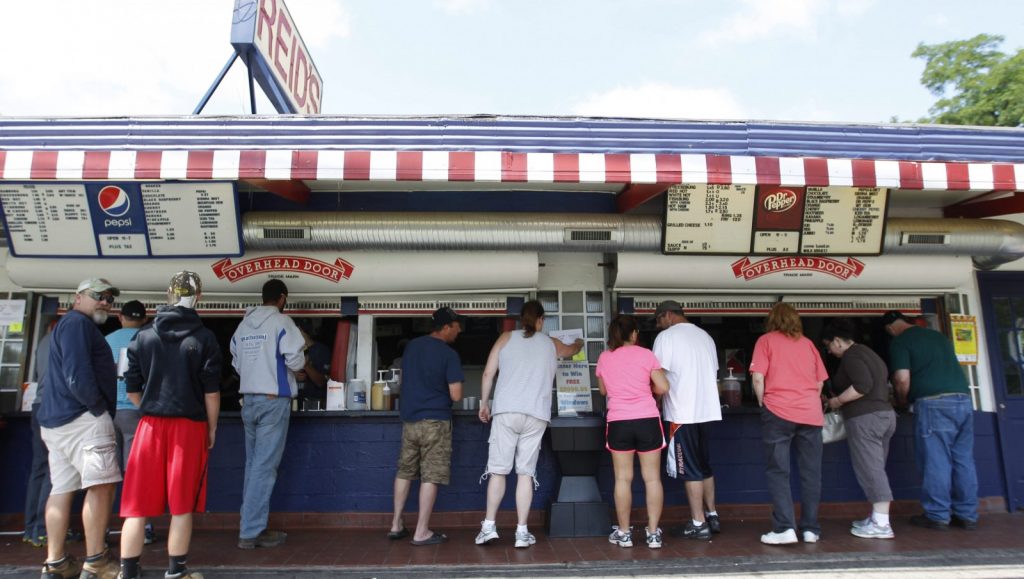 Reid's at 150 Lake Ave. in Lockport is a hot spot for summer fare. (News file photo)

Have you ever seen a restaurant menu from decades ago and felt a pang of jealousy that food used to be so cheap? That's the way things still are at Reid's. For more than 70 years, Reid's has been a summer hot dog and hamburger staple along the canal. A hamburger won't run you more than $1.50; a grilled cheese costs even less. A hot dog is less than $2. Sauce is 15 cents extra, but your bill for all of that plus fries and a milkshake will still cost less than half of a similar order elsewhere.

[Related: Enjoy summer and all the trimmings at Reid’s]

A little over a decade ago, Lake Effect Ice Cream began as a small artisan stand near the canal in Lockport. The ice cream was great. The presentation was standard. In a success story not unlike the one behind Lloyd food trucks, the ice cream duo of Erik Bernardi and Jason Wulf turned their small ice cream operation into a regional favorite with two retail locations (the other is at 1900 Hertel Ave.) and shelf space in area grocery stores. The Canal Street location is open year-round. 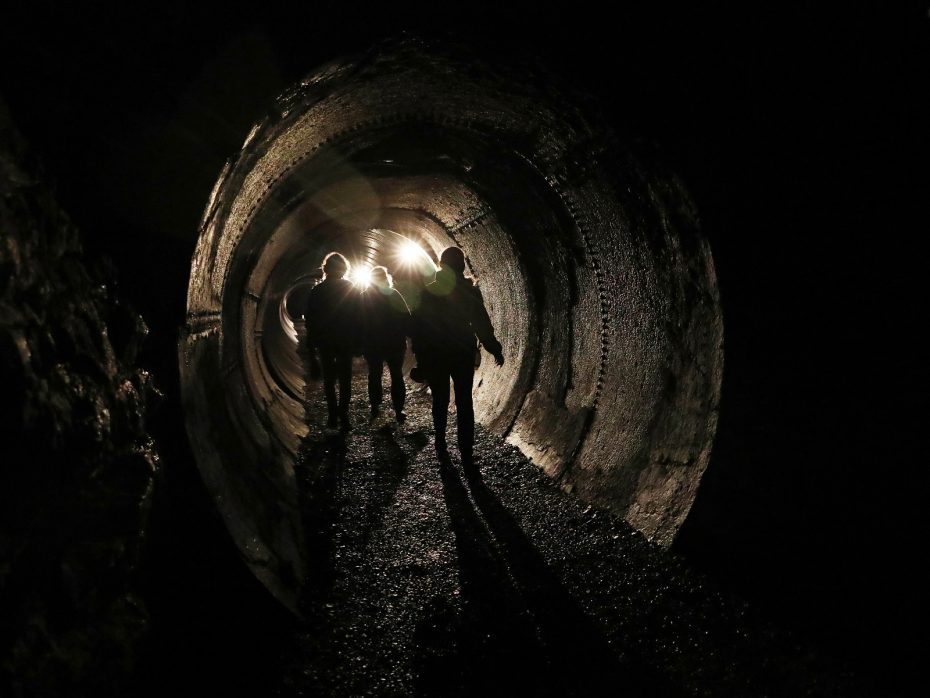 The Lockport caves are open for lantern-led boat tours underground from May through October. Not exactly for the faint of heart or claustrophobic, the tour takes visitors underground, inside the dank, dimly lit caves for a 70-minute oral history of Lockport's rich industrial past. The experience isn't scary, unless you watch the 2012 episode of "Ghost Hunters" on the caves. If the regular daytime tour is a little too vanilla, reserve a Saturday night ghost hunting tour and search the caves for the paranormal. 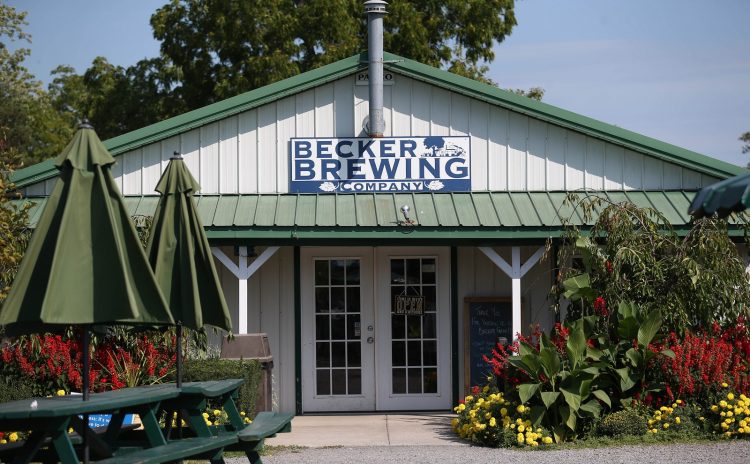 You might know Becker Farms best for apple picking, hay rides and weddings, but over the summer the vineyard and brewery are two reasons for a road trip to Gasport. (Sharon Cantillon/News file photo)

"Population Just Right" is the slogan on Gasport's welcome sign visible on the cusp of city limits from Route 31. "Just Right" must mean, in this case, around 1,250 people, as is the population in the last recorded census. It's a small town. It's got the canal, lots of woods and farmland, a hot spot wedding venue, a couple of pizzerias and bars and a hardware store with an affinity for Christmas. Welcome to rural Western New York.

Becker Farms opened as a humble farm stand, petting zoo and pumpkin patch. Over time, the farm has transformed into a year-round attraction, luring city dwellers an hour into the country especially in the fall, likely with the anticipation of pumpkins, apple picking, beer, wine and music. There are plenty of reasons to visit the farm throughout the year. Pick your own strawberries. Pet farm animals. Buy homemade fudge, baked goods and local produce at the on-site market. Pop into the brewery to try craft beer or the winery for one of the wines made with grapes grown on its vineyard, Vizcarra Vineyards.

Hardware stores, they're all the same. Tools, nuts, bolts, chickens (tell me you've been to a hardware store with chickens), but one hardware store stands out of the flock. Standish Jones isn't just a hardware store. Up creaky wooden steps, the second floor is a winter wonderland emporium of Christmas trees, ornaments, knickknacks and decorations, all year-round. (Hence the "always Christmas.") The collection has to be at least 20 retired grandmother's worth of attic decorations.

Before Middleport was called Middleport, it went by the name Tea Pot Hollow. Although it was stripped of the idyllic Hallmark vision that goes with a small town named Tea Pot Hollow, Middleport makes up for it in other ways. Beauty is in the simple pleasures of living somewhere natural. Lots of stars are always visible at night. Walks are peaceful, usually uninterrupted, but interruptions always come in the form of strangers enthusiastically greeting you as if you're neighbors. You probably are.

A hobby farm for a couple of decades, the mother-and-daughter team of Margaret Darroch and Jeanna Vanille opened their bakery at Stone Hollow Farm in 2013. Inside the quaint bakery, made-from-scratch bread, cookies and tarts are always for sale, while pies and cakes are available by order. Shop for vegetables and eggs from the farm's free-range chickens.

A neighborhood dive in its truest sense, Pony's is known as the only place in town to sit at the bar with a beer and for its chicken wings, drenched in a kind of secret sauce. Two booths are in the front windows. A few tables are scattered in the back and there's a long bar. Pony's has what a bar needs, entertainment-wise, with two arcade games and a pool table.

Across the street from Pony's, with a view of the canal from the storefront windows, Lamp Lighter Gallery showcases local artists, providing them art studio space to work in and a gallery to present their work. The ceilings are tall and white, as are the walls, and the floor is half-hardwood, half-carpet. Given the eclectic art, the general ambiance ends up slightly mismatched and quirky, as a small gallery should be.

[Related: A guide to Niagara County coffee shops and cafes]