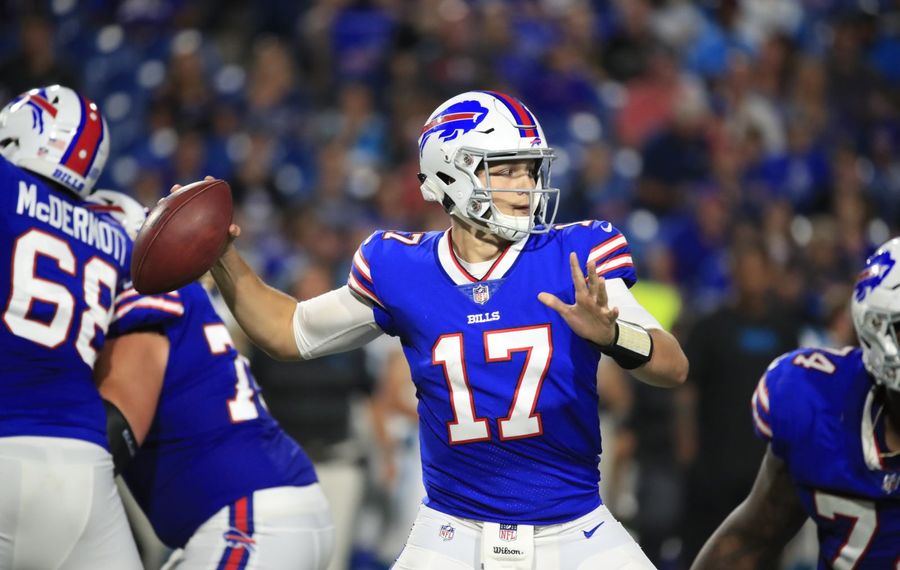 During a decade of playing in the NFL, LeSean McCoy has seen his share of quarterbacks with varying levels of experience.

He knows when he's seeing their best, worst and everything in between.

During the Buffalo Bills' offseason workouts, McCoy kept a particularly close watch on Josh Allen. McCoy wanted a firsthand account of just how much improvement Allen made from his rookie season in 2018 and, therefore, just how good the running back should feel about the Bills' overall chances for improving on last year's 6-10 finish.

“He looks better," McCoy told The Buffalo News. "I think he looks more confident. I think last year he just played off of talent. Sometimes, when quarterbacks are really talented, you overlook how smart they really are. Josh is smart."

So far, Allen seems to be showing he is smart enough not to assume he knows everything about being a successful quarterback in the NFL. Since joining the Bills as the seventh overall pick of last year's draft, the former Wyoming star has represented the franchise's best hope since its Super Bowl years of emerging from the ranks of a perpetual also-ran. That has resulted in considerable hype, as well as scrutiny.

Yet, Allen appears to be maintaining a proper balance between recognizing how far he has come and how much farther he needs to go.

"I definitely think as you get better, you have to step back and see where you’ve progressed," he told reporters at the end of the Bills' mandatory minicamp earlier this month. "Obviously, there’s something that you can get better at every day, and having a certain mindset and trying to pick something specific to go work on. At the same time, getting out there and trying to understand that some parts of my game are looking good, but trying to work on something else. ‘I can revisit this and make sure that thing is good to go.’

"It’s going to be a constant grind, though. Every time you step on the field, you have to find something else to get better at."

That introspection hasn't been lost on coach Sean McDermott. He, too, recognizes how vital Allen's performance is to the Bills' fortunes and, by extension, his job security. He is entering his third season as a head coach in a league where that is often seen as the win-or-else point for those in his line of work.

"I believe Josh is well informed of what he needs to improve on and what he does well already and improving on those areas as well," McDermott told reporters during minicamp. "So, Josh is a young man that is driven and very in tune and very self-aware to his development, his overall development as a young man and as a football player and how important that is to our organization. I’ve seen that in the habits that he has undertaken since he left here in January and when we got him back and what he’s done since that time."

Now that Allen is the undisputed starter and not sharing practice reps from the bottom of the depth chart as he did as a rookie, his challenges have graduated to a more sophisticated level. At times, offensive coordinator Brian Daboll trusted Allen enough to let him call plays at a hurry-up pace.

Allen also impressed teammates – including new receivers John Brown, Cole Beasley and Andre Roberts – with not only his skills as a thrower and runner, but with his grasp of the scheme.

As far as Pro Football Hall-of-Fame General Manager Bill Polian is concerned, Allen is on course to become the quarterback the Bills are banking on him becoming.

"But there's still a learning curve and I think he'll have learned when to run and when not to run; don't take unnecessary chances. He's a playmaker, so he's going to do that, but it's all part of the maturity factor. Everybody should keep in mind, it was three years before we won anything with Jim (Kelly). And Peyton [Manning's] rookie year was the worst, at that point, in history. So it's a work in progress, but he's on the right track."

McCoy, for one, agrees.

“Your second and third years pretty much are always (better than the first)," McCoy said. "Maybe not with numbers, but just like with confidence, knowing what to expect, knowing what to look forward to, those type of things. So, I'm all excited to see how he plays this year.”