The current Shakespeare in Delaware Park production of “The Tempest” is a playful and magical affair. Under the direction of Saul Elkin with sound design and original music by Tom Makar, choreography by Terri Filips Vaughan and set by David Dwyer, we are transported to a wondrous island, where Prospero, the usurped duke of Milan and his daughter, Miranda, have been stranded for many years. When a ship carrying his enemies comes close enough to be within his power, Prospero uses magic and deploys his servant, Ariel, to wreck the ship on his shore, while keeping all its passengers safe.

Shakespeare sets the scene for a perfect revenge, and the bard certainly had delighted audiences with revenge many times before. In “Titus Andronicus,” his first tragedy, Titus feeds Tamara her own sons, baked into a pie. “Hamlet,” of course, ends with bodies strewn across the stage.

In “The Tempest,” however, the final play that Shakespeare wrote alone, he has other plans. “The rarer action is in virtue than in vengeance,” says Prospero.

No injury will come to anyone in “The Tempest.” Rather than harm his enemies, Prospero scatters them across the island in confusion. Before he is done, treachery will be forgiven. Slaves will be freed. Lovers will be brought together. Fools will get their comeuppances comically.

This production borrows delightful elements from many previous stagings of the play. The opening storm uses the marvelous device of characters clinging to lengths of rope as they are tossed to and fro by the tempest. There is a miniature ship, navigated through the audience and onto the stage by Ariel. Prospero will conjure his magic with a circle of light. 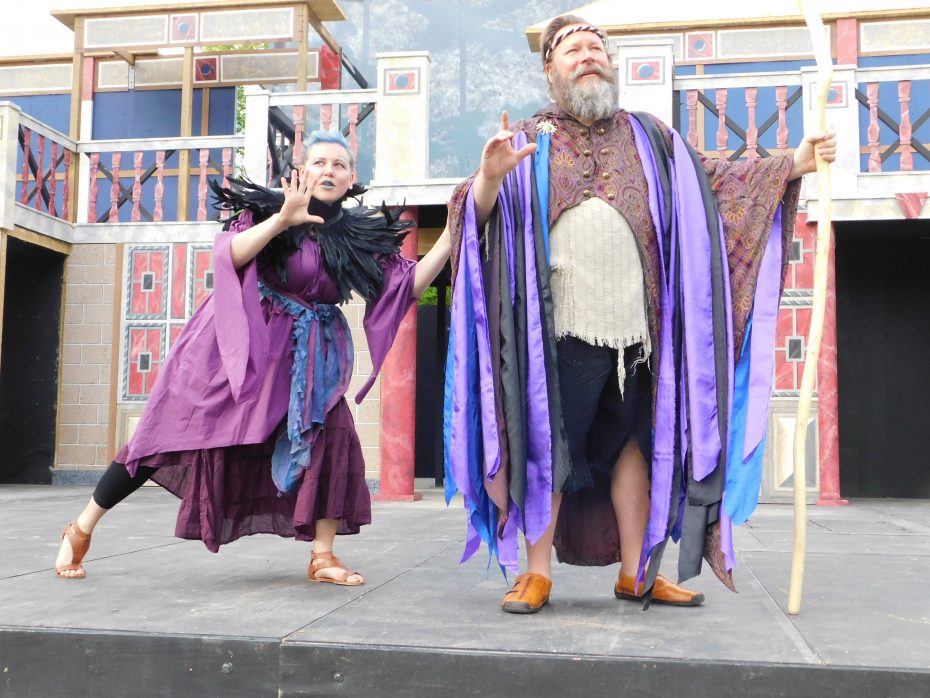 David Marciniak (as Prospero) and Robyn Lee Horn (as Ariel) in "The Tempest" at Shakespeare in Delaware Park. (Photo courtesy of Brendan Didio)

All of this is great fun. But the greatest magic is not to be found in anything we see, but in what we hear. Makar’s sound design punctuates and amplifies moments of magic, evokes storms and seas and forests, and echoes magical voices. At one point, when Makar had set a scene with birdsong, every red-winged blackbird around Hoyt Lake raised its voice in response. Similarly the sound design activates our imaginations.

I was obliged to see the show in two parts on two separate evenings. On the opening night, rain forced the cancellation of the second half after intermission. Therefore, I saw the first part with a sparse audience on a chilly Thursday night; and the second part on a glorious Sunday night among a large crowd. It is possible that anticipation sweetened my return, which was satisfying in every way.

The cast is uncommonly confident and comfortable with Shakespearean language. The play is rendered with great clarity and even mischievousness.

David Marciniak is the most genial and lovable Prospero I have ever seen. This is not the brooding and egregiously wronged man setting out to settle scores. Here is a dad who loves his daughter and is giddy to have the means to restore her deserved life to her. He impishly revels in joy when Miranda and Ferdinand hit it off. There is never doubt that he will keep his promise to free Ariel. This is an excellent performance.

There are many characters and a lot of plot, which I will not recount here. In my view, this story should be familiar already, but it’s very accessible anyway. Here is a quick spin through what you will see in this very strong production.

Christine Turturro, after a formidable debut in “The Undeniable Sound of Right Now” at Road Less Traveled Theater, makes a graceful and assured Miranda.

Robyn Lee Horn, who was recently spectacular as the lead in “Fun Home” at MusicalFare, concocts an entirely different persona to make an impish and enchanting Ariel. 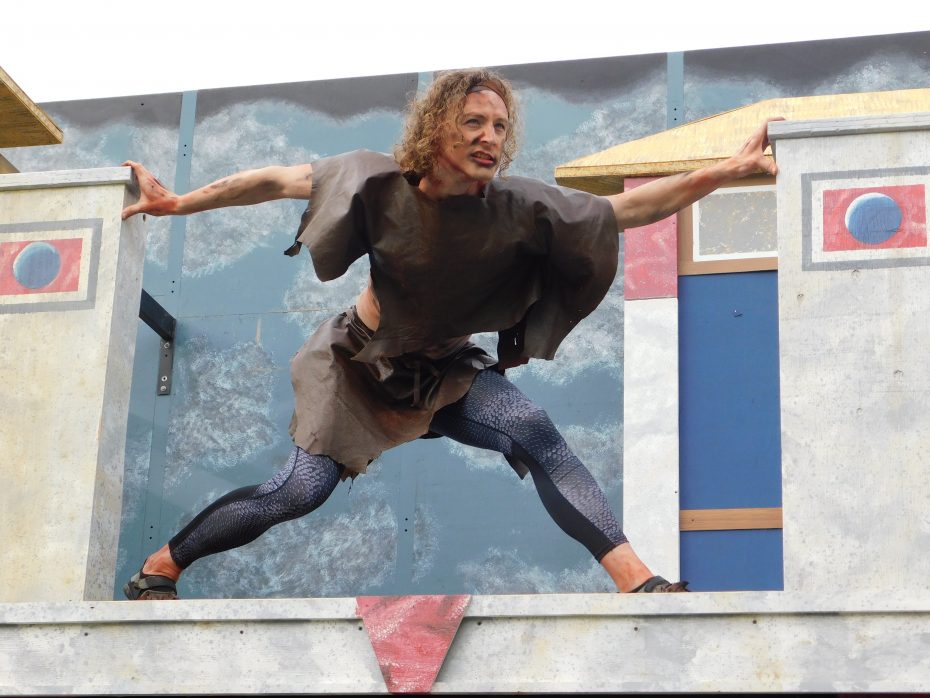 Phil Wackerfuss dances his way through the role of Caliban the monster, winningly giving the character some of the sprightliness that is typically associated with Ariel.

Chris J. Handley and Norman Sham expertly clown through the roles of Trinculo and Stephano, interacting with the audience, and bringing great merriment as they comically navigate their opportunistic journey.

Brendan Didio is the perfect juvenile lead as Prince Ferdinand, the earnest young man who is willing to earn the hand of Miranda.

David Lundy is every inch the clueless king as Alonso, which he accomplishes with great charm.

Brendan Cunningham and Brett Klaczyk, costumed in black by Ken Shaw (who has done splendid work throughout), embody dastardly Sebastian and Antonio with delightful evil.

The production moves briskly but maintains the majestic visions of pageantry, including the betrothal masque and all the dances and plot twists. Every element comes together on Dwyer’s set, devised to resemble the Globe, for a play that is especially well suited to Delaware Park. When the revels end and the actors leave the stage, as the audience retreats through darkened Delaware Park, it does seem as if something magical has melted into thin air.