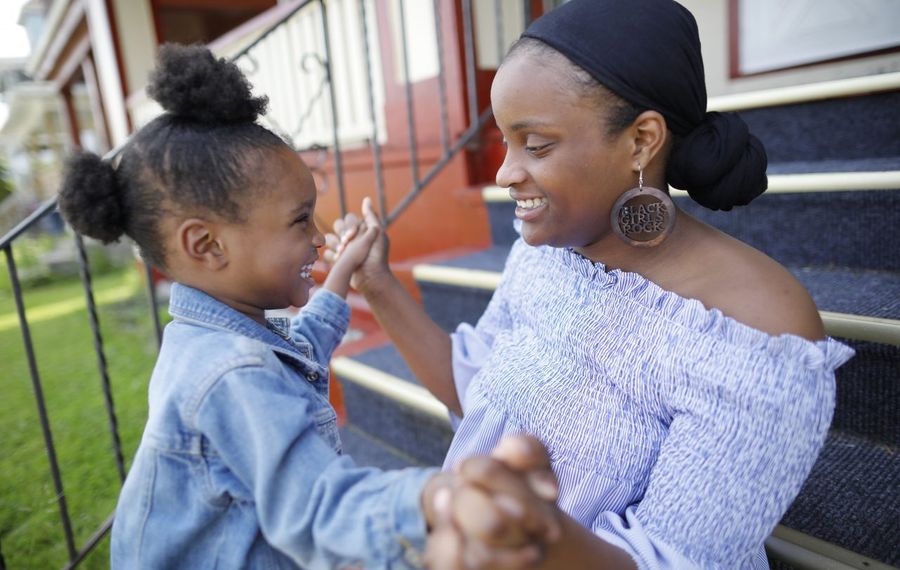 The road to high school graduation can be a difficult one, particularly in an urban district like Buffalo, where life’s roadblocks tend to be larger, the potholes deeper and the detours longer.

Or maybe it’s arriving from another country.

Sometimes it's fending off street life.

The challenges vary with the student and the setting, but in overcoming them, each of these students will get what they came for – a diploma – even if some of them didn't envision this day when they first enrolled.

As seniors graduate throughout the city this week, here are a few stories of those wearing their hard-earned caps and gowns:

High school for Shamara Cross went something like this:

Wake up. Take her daughter, Shayla, to day care. Go to school, go to sports practice, go to her part-time job. Later, do homework and spend time with Shayla before crawling into bed around 11:30 p.m.

The story ends with Shamara graduating Wednesday from McKinley High School – 3-year-old Shayla in tow – but it easily could have turned out much differently when she got pregnant during her freshman year.

“It was kind of a rough journey at first,” Shamara said, “but as soon as I got the hang of things it got better – thanks to the support that I have.”

Help came from her parents, Tamara and Shannon, and siblings Temara, Temar and Shamar, who pitched in with Shayla so the new mom could make the most of her high school experience.

Captain of the varsity soccer team in the fall, forward on the basketball team in the winter and, when track season rolled around in the spring, Shamara participated in the triple jump, shot put and 100 meter hurdles.

And as a young mom, Shamara was forced to be disciplined in her studies, graduating from McKinley’s electrical program with a 94 average.

After high school, Shamara begins an apprenticeship program with IBEW Local 41, so she hopes life will be a little less hectic for her and Shayla.

Making it. But what now?

Khalil Lee will be the first in his family to receive his high school diploma on time when he graduates Wednesday.

“That’s kind of big for me,” Khalil said. “I didn’t think I was going to make it this far.”

As a freshman, Khalil entered Burgard High School a self-described troublemaker – fighting, skipping school, horseplaying in the halls. He was suspended nine times that year.

Then, his world started caving in. 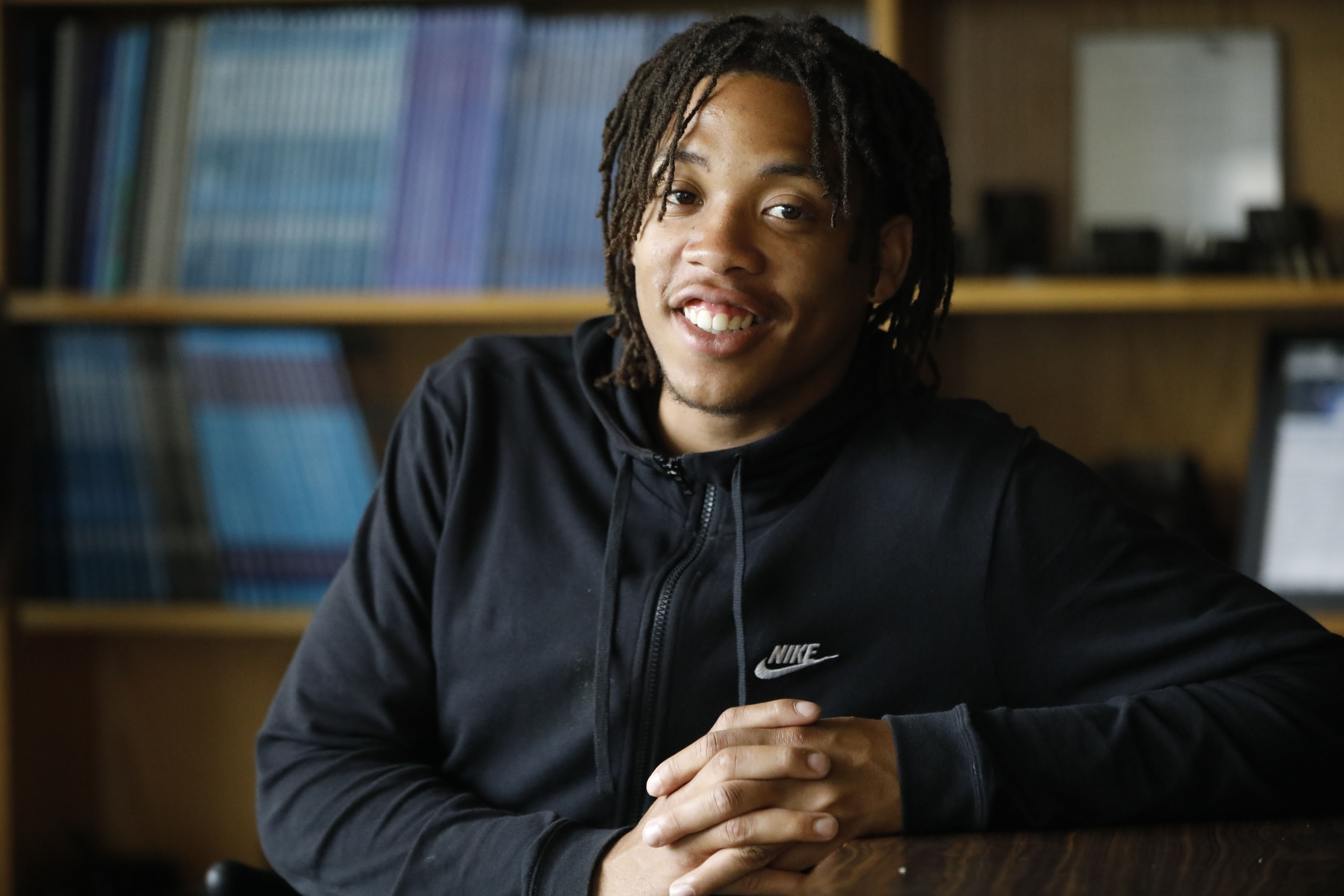 Khalil Lee overcame the deaths of his mother and best friend to graduate from Burgard High School. But he wonders what happens now. (Derek Gee/Buffalo News)

His mother died the summer of his sophomore year. He returned to school in the fall to find most of his friends had either been kicked out or had dropped out. His best friend was gunned down that October.

Khalil, too, now had to watch his back getting to school after having moved from his Central Park neighborhood to live across town with his sister in gang territory.

Any one of those obstacles could have pushed him to drop out – and he wanted to a few times – but he didn’t.

Instead, he credits staff and teachers at Burgard for rallying around him, reinforcing the need for school and helping him make it through. Assistant Principal Jamie St. John even picked him up in the mornings to ensure he arrived at school safely.

The least he could do in return for all of that support, Khalil said, was put in the work.

Having met so many people at Burgard who changed his life, graduation is bittersweet for Khalil, especially since he doesn’t know what lies ahead for him.

Moving to the head of the class

When Olabisi Arobadade came here from Nigeria four years ago, she already knew English, giving her a big leg up on the thousands of kids from foreign lands who enter Buffalo schools and struggle with the language in the classroom – sometimes for years.

But Olabisi had her own challenges. 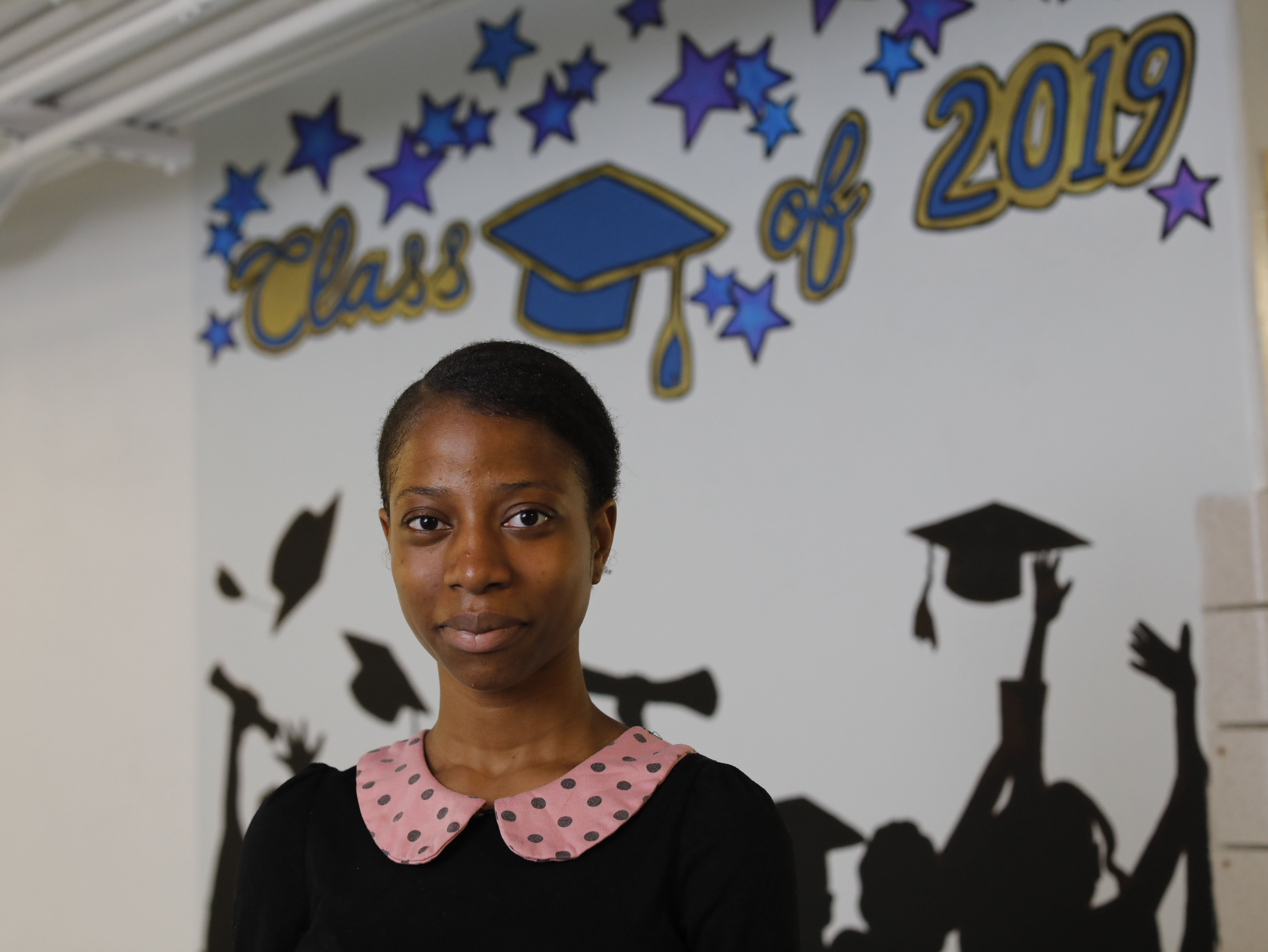 After moving here from Nigeria, Olabisi Arobadade overcame the culture shift and doubts about her own abilities to graduate at the top of her class. (Derek Gee/Buffalo News)

Olabisi came from a school in Nigeria where she was a senior, but didn’t have many of the classes needed to graduate here in New York. She would have to start all over again as a freshman at International Preparatory School on 14th Street.

The school, filled with kids from all over the world, was large and Olabisi, unaccustomed to moving from class to class, remembers getting lost in the corridors.

Frustrated, Olabisi already believed she wasn’t smart enough – and was told as much back home. The fact of the matter was she didn’t care for school and, with grades in the 60s and 70s back in Nigeria, had little interest in proving her doubters wrong.

“You know what?” she told herself, “I’m just going to try and do my best.”

Much to her surprise, Olabisi earned a 96 average her first quarter, which gave her the confidence boost she needed. She began studying more and seeking out help after school.

Each quarter, she would try to beat her previous average – and each quarter she did. There was some overlap from her education in Nigeria, but now it was clicking for her.

In fact, as graduation neared her average reached 101.7 – smart enough to be valedictorian.

Her advice to other immigrant students struggling in Buffalo’s classrooms?

“Keep trying,” she said. “It will definitely get much easier as the years go by.”

Finding opportunity at the alt school

Meet Tyreshia Sanders and Desaun Atkinson, the valedictorian and salutatorian, respectively, for the Class of 2019 at School 131 @ 4, an alternative school on South Park Avenue.

“It’s cool,” said Desaun, “I didn’t ever think I would be the salutatorian, though.” 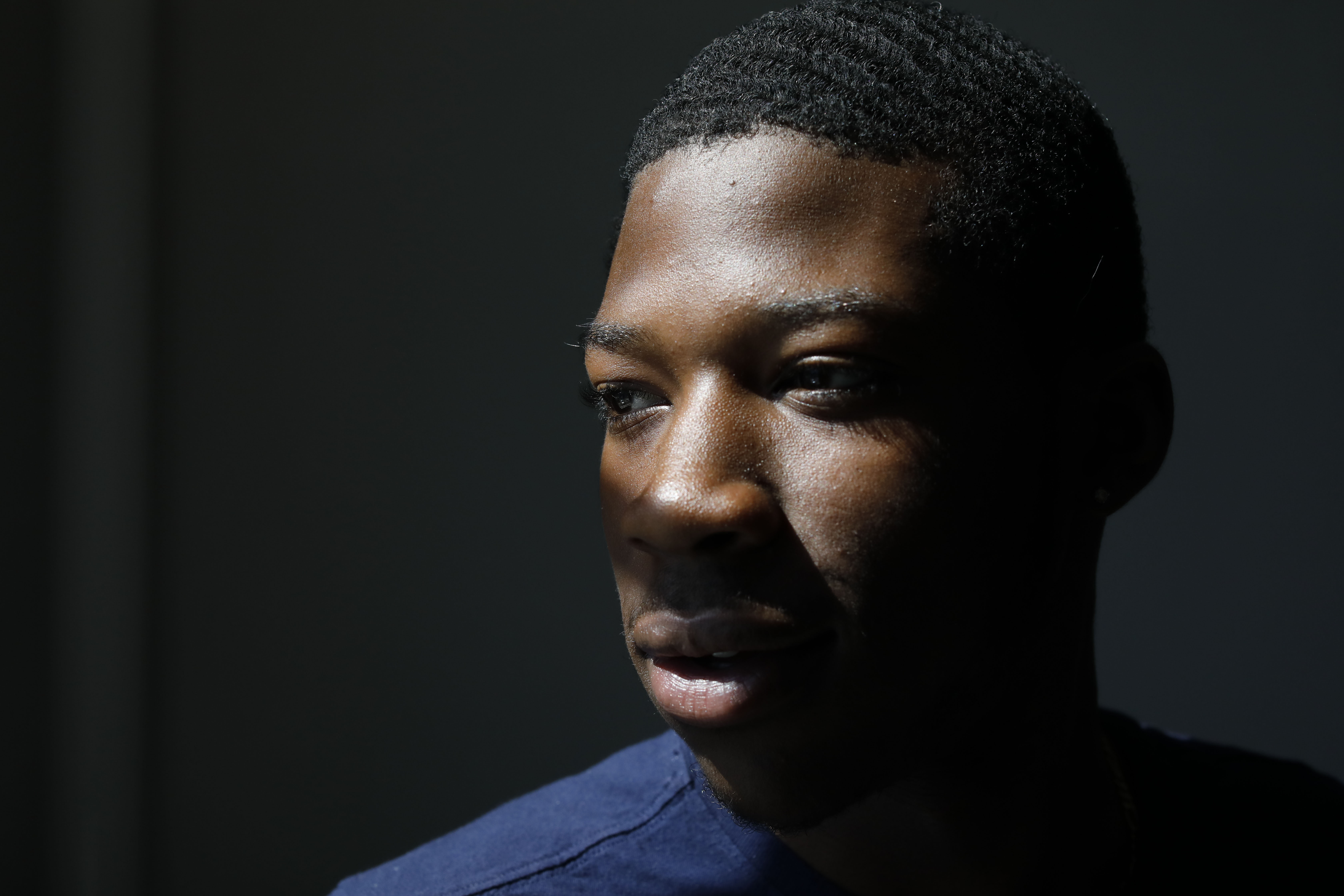 Neither took the traditional path to graduation, instead taking a road that was as tough as any.

Both were kicked out of McKinley High School during their freshman year. Both made stops at residential home programs. Both were eventually placed at 4, which Tyreshia – “Ty” for short – refers to as a last stop because there’s nowhere else to go after this.

The graduation rate was 7% at the school last year. This year, Ty and Desaun are two of just 10 graduating on Tuesday. 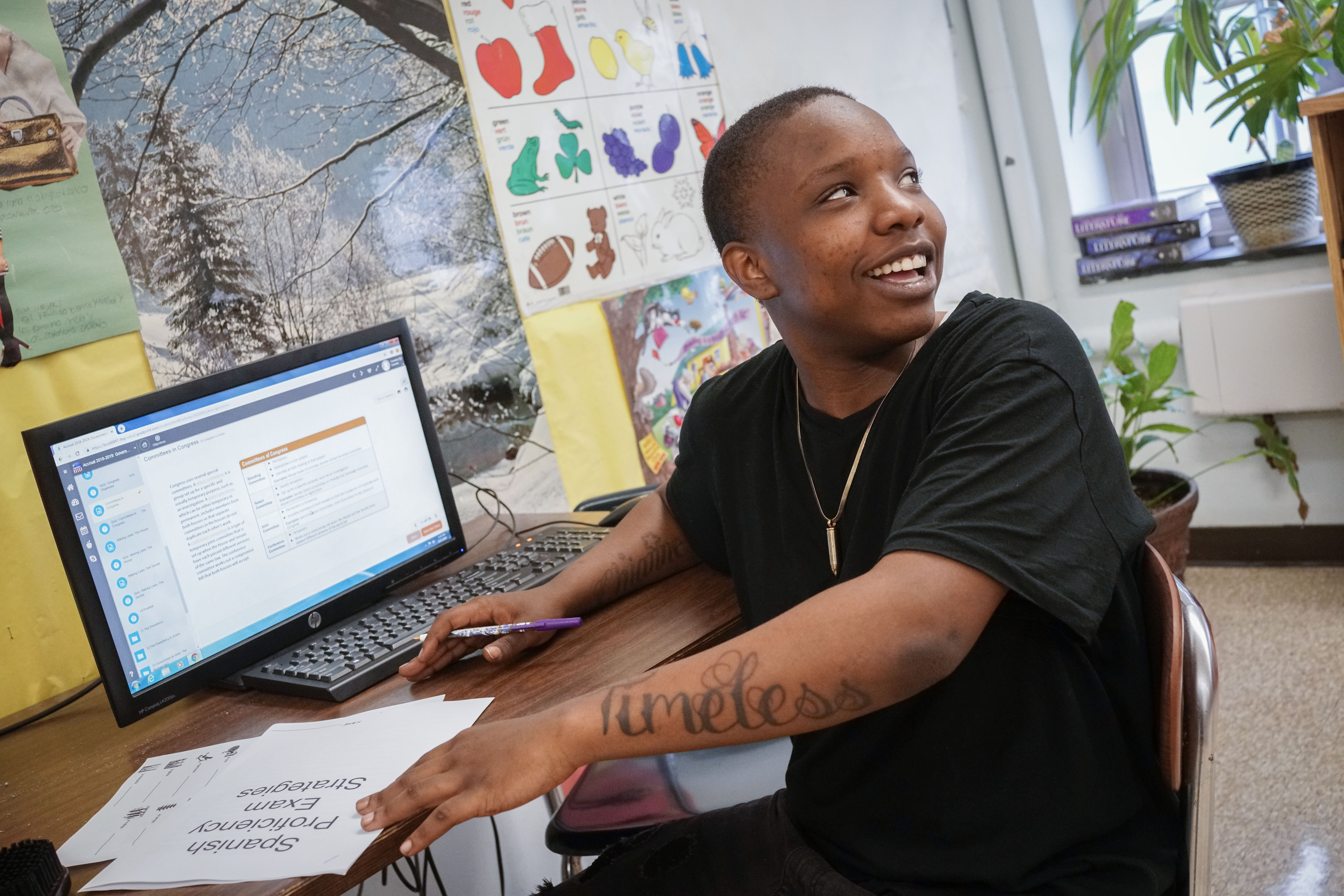 Valedictorian Tyreshia Sanders wants people to know what you can do when you seize a last chance. (Derek Gee/Buffalo News)

“You tell someone you go here and the first thing they’re going to ask you is ‘What teacher did you beat up? What did you steal? What did you do?’ ” Ty said. “When they hear this school, it’s all the bad that comes from it.”

“I want people to know we actually do do something in here,” Ty said, “people actually are making it out of here.”

In fact, Ty is planning on attending Niagara College Community College in the fall, while Desaun plans on working.

A diploma and degree in four years

Forgive McKenna Hennigan if her graduation from high school is a bit anticlimactic.

After all, she already graduated from college a month ago.

McKenna, 17, is a senior at Middle Early College High School on Main Street, where students work toward their associate degree – free of charge to them – while at the same time pursuing their high school diploma.

Most graduate high school in four years and can return to Erie Community College for a fifth to finish up their two-year degree, but McKenna put in the hard work to earn both in four. 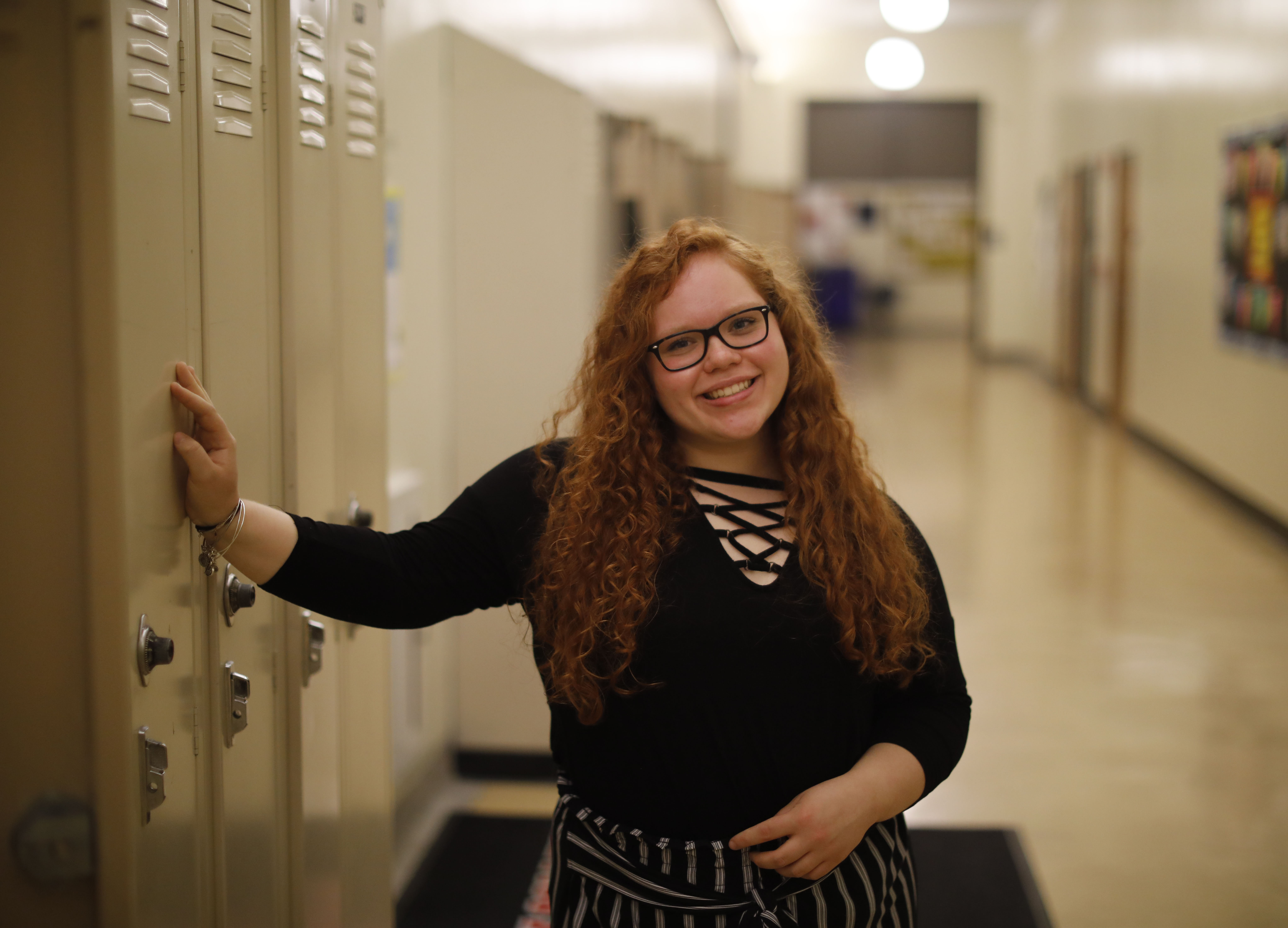 McKenna Hennigan, 17, is among only four students ever to earn a high school diploma and an associate degree in just four years at Middle Early College High School. (Derek Gee/Buffalo News)

In fact, McKenna is only the fourth student in the 16-year history of the high school to earn both a diploma and associate degree in four years, said Sue Doyle, principal at Middle Early College.

She attended commencement at ECC on May 22 and will receive her high school diploma during ceremonies on Thursday.

“I feel if I can get a degree before I get a high school diploma,” McKenna said, “I can do anything.”

While she leaves high school with a 90 average, McKenna didn’t enter as an honor student and struggled her sophomore year, Doyle recalled.

But she’s a poster child for a high school created with the average student in mind.

“It’s a great opportunity for middle-of-the-road kids,” Doyle said, “but it’s not an easy program – and it’s a ton of work.”

McKenna earned a scholarship to Medaille College, where she’ll study veterinary technology in the fall.

She will enter as a junior.