NEW LONDON, N.H. – Sen. Kirsten E. Gillibrand swept into a gift shop in the center of this quaint New England town eight days ago and greeted Kathryn Kull with a smile and a handshake.

Kull responded with a look of surprise that told the tale of Gillibrand’s presidential campaign.

“I don’t really know her as well as I know the other candidates,” Kull acknowledged later. “And honestly, there are so many candidates.”

To be exact, 23 serious candidates are vying for the 2020 Democratic presidential nomination.

And Gillibrand – a New Yorker seen as a possible top-tier contender only six months ago – lags badly in the polls, far behind the top five.

Gillibrand will get a chance to break out of the pack this week, as she and 19 other contenders meet, 10 candidates per night, in the first presidential debates.

But so far, Gillibrand 2020 is a campaign that has struggled to win converts. Interviews with 70 voters here, in the state that will host the first primary in February, shed some light as to why.

[RELATED: Lagging in the polls, Sen. Kirsten Gillibrand tries to stand out by ideas]

Gillibrand is failing to leave voters with much of an impression. Two-thirds of the voters interviewed – including 15 of the 21 who just saw Gillibrand’s 10-minute lightning round of a stump speech – said they don’t know enough about her to have a strong opinion of her.

And even though Gillibrand has unveiled more policy proposals than most other candidates, several other contenders strike many voters as more ideas-driven or more inspirational.

None of this deters Gillibrand. She bounded through her seven public events in New Hampshire last weekend with the same fast-talking energy that she’s shown since joining the Senate a decade ago.

And in an interview afterward, she vowed to keep going until voters start buying her argument that she’s the “brave” candidate best positioned to take down the Republican president, Donald Trump.

A lack of details

Gillibrand entered the presidential race amid high expectations in January – and one of those expectations was that her candidacy would appeal to voters like Dr. Frances Lim-Liberty.

A mother of two young boys, Gillibrand put women and families at the center of her political career. Her fight against sexual harassment prompted “60 Minutes” to label her the “#MeToo” senator. And if elected president, she vows to pass a “Family Bill of Rights" including paid family leave and universal pre-K.

That would seem to be a message tailor-made for voters like Lim-Liberty, a 38-year-old pediatric endocrinologist with a 6-year-old daughter. But when asked about Gillibrand – whom she had just met at a New London diner – Lim-Liberty didn’t sound impressed.

“I really don’t know much about her, other than her stance on reproductive freedom,” Lim-Liberty said. “I think a good candidate needs to be well-rounded. And I don’t know where she stands on economic issues.” 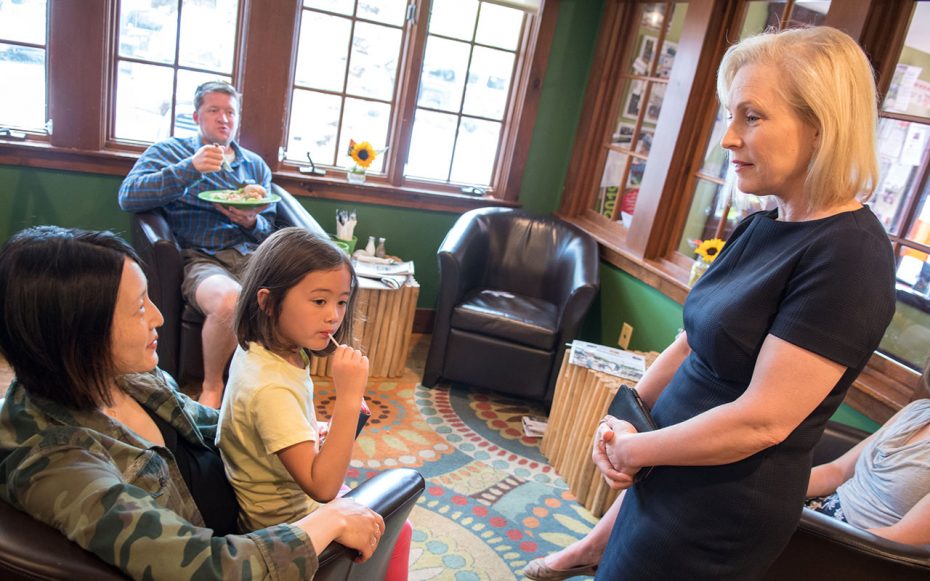 “I don’t really have an impression of her yet,” said Catherine Knower, 38, an East Aurora native who couldn’t attend the recent campaign event where her husband, Plymouth Democratic Chairman Jay Knower, appeared with Gillibrand.

Tom Murphy, 34, said he liked Gillibrand’s stump speech in Franklin, N.H. Afterward, though, he added: “I don’t know a ton about her, other than the #MeToo thing.”

It’s not just in the coffee houses of New Hampshire that Gillibrand’s campaign has failed to resonate. Statewide, the latest RealClearPolitics polling average puts her current share of the vote at a mere 0.3 percent, which is exactly where it stands in the national average.

And just like in New Hampshire, Gillibrand’s problem nationwide seems to be her failure to leave voters with a reason to back her. The latest Politico/Morning Consult national poll found that 24 percent of Democratic primary voters had heard of Gillibrand but had no opinion of her. Five of the six other U.S. senators running for president elicited stronger feelings.

Gillibrand’s lowly status in the polls can’t be attributed to a lack of effort. She has made 38 campaign appearances in New Hampshire so far, more than all but two long-shot candidates.

Her struggles also don’t seem tied to two issues that have dogged her campaign. Of the 70 voters interviewed, only four expressed concerns that Gillibrand once took conservative stands on issues like gun rights, only to flip-flop when she joined the Senate. Only five voters complained that Gillibrand called for the resignation of Sen. Al Franken of Minnesota amid charges that he touched women inappropriately.

[RELATED: In Iowa debut, a dynamic Gillibrand confronts anonymity — and her past]

Instead, Gillibrand’s troubles appeared tied to her message and how she delivers it. While Gillibrand has held several New Hampshire events focused on her policy proposals, her stump speech is half as long as those of some other Democratic contenders, and it focuses largely on her biography and her passion for a fight.

“I will take on the battles that other people won't," she said at a brewpub in Plymouth. "I will go through fire to do what's right, even if it's hard, especially if it's hard. ... That's why I'm running for president, and that's why I'm going to win."

Never in that stump speech did Gillibrand mention her “Family Bill of Rights,” or her plan for public campaign financing, or her plans to protect abortion rights.

Gillibrand touched on some of her proposals in responding to questions, but the senator's campaign appearance left Jamie Cody longing for more.

Meanwhile, other voters seated nearby at the bar groused that Gillibrand left after answering only three questions.

“She can be too aggressive sometimes,” Cannon said of Gillibrand. “She’s a New Yorker, so she’s got a lot of energy. But here in New Hampshire, we’re laid-back people. You’ve got to be able to connect with the community.”

Josie Pinto of Concord, N.H., got so excited to hear that Gillibrand was in town last October that the young reproductive rights activist went from coffee shop to coffee shop looking for her.

When she finally tracked Gillibrand down, Pinto told her: “I hope to hear more from you. Beyond the midterms?”

The New York Times reported on that episode at the time. Eight months later, Pinto has heard more – but she’s not quite so excited about Gillibrand.

"There’s so much I love about Kirsten Gillibrand, but ultimately, I just kind of think of Elizabeth Warren as a woman with a plan,” said Pinto, 23.

Pinto grew up in Kinderhook, in the Hudson Valley district where Gillibrand launched her congressional career, and she long regarded Gillibrand as her “feminist icon.”

Now Pinto praises Warren as a candidate who speaks to her on a broad range of issues, from women’s rights to economic opportunity.

Pinto’s story speaks volumes about another big challenge Gillibrand’ faces: the other candidates who have found a way to connect with more voters. 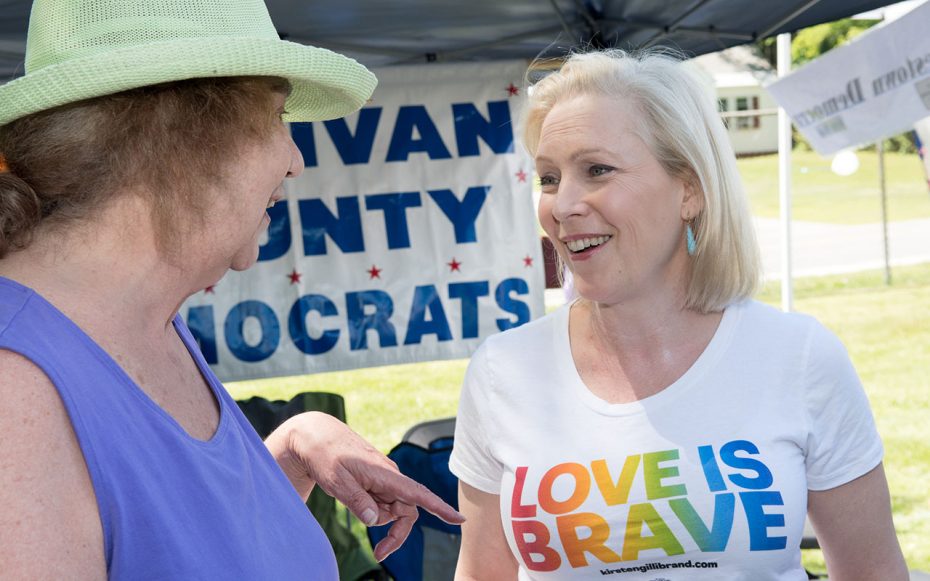 Former Vice President Joe Biden, the best-known candidate, leads in the polls both here and nationwide, but several other candidates appear to be stirring much more passion than Gillibrand.

First, there’s Sen. Bernie Sanders of Vermont. Several voters said that Gillibrand and other candidates have been mimicking Sanders’ stances on Medicare-for-all and other progressive issues.

“Why go with a copy when you can have the original?” said Atlant Schmidt, 63, of Nashua.

Several other voters lavished praise on Pete Buttigieg, the 37-year-old mayor of South Bend, Ind., who catapulted toward the top of the polls with a standout appearance in an CNN town hall.

“A lot of the candidates don’t engage constructively the way he does,” said Jim McLeod, 50.

Buttigieg's performance on Potus Pod, a political podcast, won McLeod's support. And so it was that McLeod, who is not gay, recently found himself volunteering at the Buttigieg table at the Rural Pride Festival in Claremont, N.H., 65 miles northwest of McLeod’s home in Manchester.

Asked about Gillbrand, McLeod said: “She didn’t captivate me the way Mayor Pete did.”

Gillibrand hasn’t done so even though, like Buttigieg and most of the other candidates, she has appeared on the cable town halls and Sunday talk shows and political podcasts that might just produce the viral moment that can elevate a campaign.

Andrew Yang, a largely unknown New York entrepreneur who is now ahead of Gillibrand in many polls, has made the most of such appearances. Emphasizing his concerns about jobs lost to automation and his response to it – a guaranteed basic income – he has talked himself into the race and won the support of voters such as Noah Schwartz of Dover, N.H.

"I'm not a particularly big fan of hers," said Schwartz, 19, of Gillibrand. "She's not addressing the economic anxieties that led to Trump."

Gillibrand ended her latest New Hampshire trip with an energetic strut through the Rural Pride Festival in Claremont, a town of 13,000 near the Vermont border.

There she did what she clearly loves doing: She met with voters and listened to their concerns for a minute or two before posing for selfies and moving on.

Told afterward that many New Hampshire voters say they want to hear more details from her, Gillibrand acknowledged just that.

“These are high-information voters,” she said. “They want to know your plans for health care, education, jobs, they want to know how you're going to actually pass those bills. How are you going to get it done?”

Yet Gillibrand also attributed her slow start not to her failure to delve into those details, but to the fact that the campaign is still young. 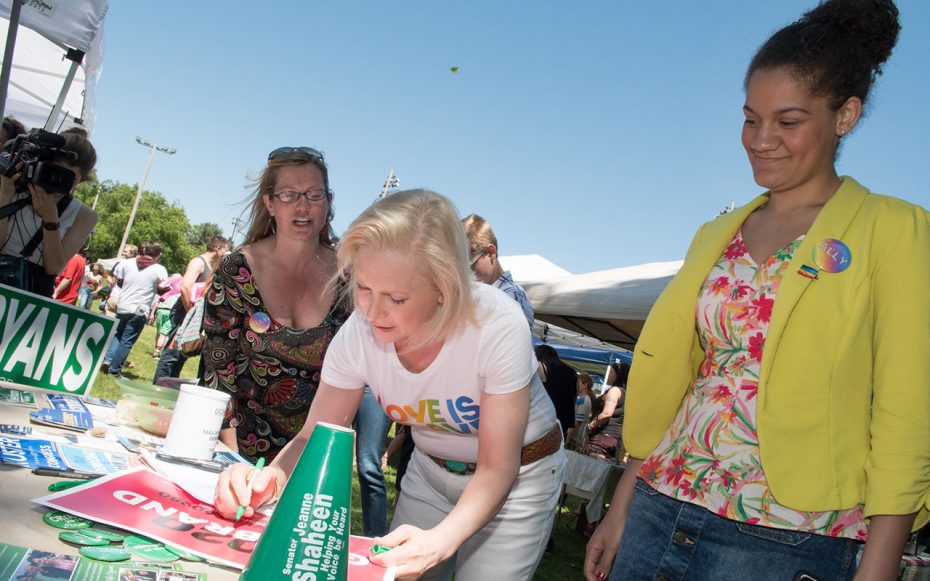 Other candidates lagging in the polls agree that, with the New Hampshire primary more than seven months away, there’s no reason to panic.

“I feel like there's plenty of time to get known and to get heard,” said New York City Mayor Bill de Blasio after a campaign appearance in Manchester. “And my message couldn't be more simple. It's working people first. And I'm finding a lot of folks really appreciate that. ... They think Democrats too often are kind of mealy-mouthed about talking about what's really going on.”

Several other candidates – such as Sanders, Warren and Yang – also put economic fairness at the heart of their campaigns. Yang said the candidates who are winning support are the ones who both deliver a progressive economic message and cast themselves as outsiders.

Asked how he leapfrogged candidates like Gillibrand in the polls, Yang said: “There’s been a real thirst for a real change agent for a number of years, and I think I am the next example of that.”

To hear Gillibrand tell it, she’s that change agent. Though the polls don’t show it, she said she has won “a huge increase of support” in the past month, as she has fought nationwide efforts to curtail abortion rights.

“The moment that we're in is very reflective of who I am and where I lead and why my leadership so important," she said. "I think I will be breaking through much more in the weeks and months to come."

Her next big chance to break through will come at 9 p.m. Thursday, when she will take the stage to debate Biden, Sanders, Buttigieg, Yang and five other Democratic contenders. There, she will try to do in short order what she has failed to do over five months on the campaign trail.

“I'm just really focused on making sure I convey this massive vision and agenda that I have in a very short time,” Gillibrand said.