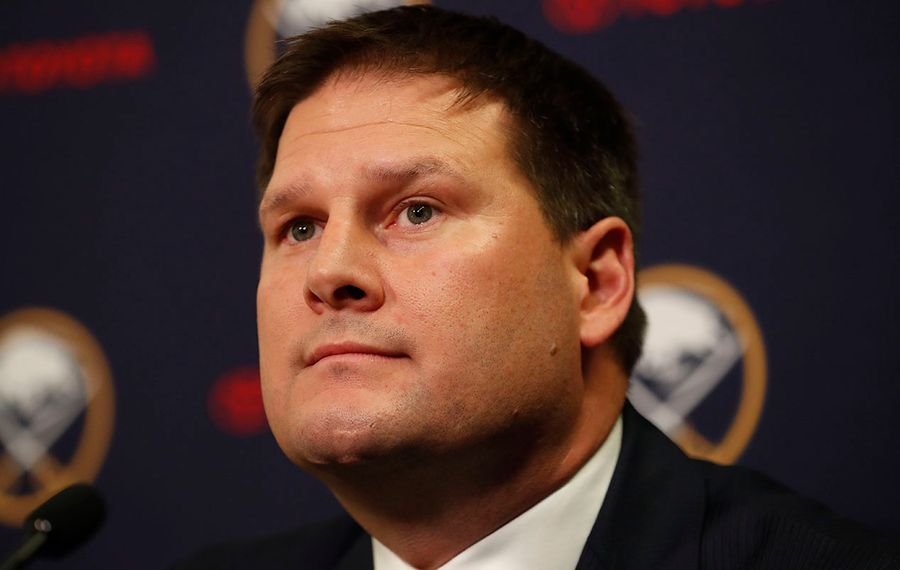 VANCOUVER – There are a lot of reasons the job of an NHL general manager is a tough one. Here's the latest one to add to the list: How do you know what kind of team to build these days?

It sure seemed like the NHL was going back to a speed game when the Pittsburgh Penguins won back-to-back Stanley Cups in 2016 and 2017. Last year's Washington-Vegas Cup final certainly highlighted speed but both of those teams were "heavy" as well.

This season seemed to be all about speed when you consider teams like Tampa Bay, Toronto and Calgary that roared to success over 82 games. Then the playoffs started. Upsets were everywhere. Columbus, Carolina and St. Louis were among the teams advancing. Boston forged on. The Lightning, Leafs and Flames were doused.

By the end, the final was between the Bruins and the ultra-heavy Blues. Speed seems to be what you want in the regular season. Brawn seems to answer the call in the postseason. What's a GM to do?

"It's always trying to find out do you have enough skill to go through it but is that skill willing to get into the hard areas and compete in certain areas?" Sabres GM Jason Botterill said here in the hours leading into the NHL draft. "What both organizations showed is that they faced injuries throughout their runs and they had the depth to step in. Guys could come in who had been out of the lineup and contribute right away.

"The story with St. Louis is just the parity in the NHL right now. From where they were at Christmas time, start of January to the end of the season, it was fascinating for our fan base and I think it was great for our league."

Dallas GM Jim Nill knows all about that. His team took the Blues to double overtime in Game 7 of the second round and fell one goal shy of short-circuiting the Blues' "Gloria" run long before it ended in triumph in Boston.

"You really do have to have a mixture," Nill said after Saturday's activities had concluded. "But you saw that Pittsburgh won the Cup with speed. It's really the intriguing part of building a team. It's a dilemma that's a difficult one, yes, but there are other factors in play. The cap is so important to determine where your team can sign people and where your team is at.

"It really makes our game so great that with the parity in our league, we're all 3-5 wins away from each other it seems. Everybody really has a chance. That's what makes it intriguing."

Nill's right that most teams were 3-5 wins away. The Sabres, of course, finished much farther away than that, but were at the head of the pack last November so they've had a taste of success.

"We’ve talked about that parity numerous times," Botterill said. "You have teams that didn't make the playoffs or were eliminated in the first round that had Stanley Cup expectations. Then there's the salary cap situation and there's a lot of things in flux from that point."

Whether it's speedy or heavy, Botterill's thought about depth is the Sabres' point of emphasis right now. They need to make some trades or get into free agency at the non-Matt Duchene level. This corner's top two targets at wing would be New York Islanders captain Anders Lee (6-2, 225) and San Jose's Joonas Donskoi (6-0, 190). They combined for 42 goals and 88 points last season. There's your mix of speed with some size.

There are plenty of alumni candidates, too. I'm on record completely in the corner of bringing back Jason Pominville on a one-year deal and wonder if Botterill will inquire with Thomas Vanek as well.

I don't think the Sabres would want to be in the price range that Toronto's Jake Gardiner or Winnipeg's Tyler Myers might earn with the defense market getting thin, given the signing of Erik Karlsson by San Jose and the trade of Jacob Trouba from Winnipeg to New York.

Still, former Calder Trophy winner Myers enjoyed his time in Buffalo and made it clear he was interested in being part of the rebuild before he was shipped to Winnipeg as part of the Evander Kane trade in 2015. Probably worth at least a call to check in.

Botterill got almost instantly choked up Friday when I asked him about Robin Lehner's fabulous speech at Wednesday's NHL Awards Show. Lehner has said several times this season how important Botterill was during the early days of his rehab and how much it meant to him that the GM checked in on him over the summer – even after the Sabres walked away from his contract.

You can say what you want about how Botterill has done at his job so far and there's plenty of chatter about it, mostly as it relates to the Ryan O'Reilly trade. But when it comes to class and personal integrity, Botterill is universally acclaimed as one of the good people in the league and that certainly reflects well on the Sabres.

The Seattle ownership group visited Vancouver over the weekend and gave an update on its preparations to start play in the 2021-22 season. In the answer to what rates as the biggest question he gets over and over, president and CEO Tod Leiweke said the team is taking its time on a nickname, colors and uniform scheme.

"We want to get it right. It's a complicated world," Leiweke said. "There's lots of trademark restrictions out there and names already taken. And part of it is, the longer we're going as an enterprise, the more we know what we stand for and the more we know what we don't stand for. As anxious as people are to have us wear a name on our chest, taking our time is going to serve us well in getting it right."

The Seattle group also said it would like to host the 2021 draft in concert with the expansion draft to stock its club. The former Key Arena, once home to the NBA's Sonics, is being completely rebuilt under its iconic roof from the 1962 World's Fair and will be ready by June 2021 if the league wants to award the draft.

The announcement that next year's draft will be in Montreal was going to bring high interest in that hockey-mad city anyway. But it lines up with a Quebec native being well on the way to being the No. 1 pick and thus ensuring a complete circus.

For more than a year now, Rimouski left winger Alexis Lafreniere has been billed as the first top pick of the new decade and nothing seems to be changing.

The 6-foot-1-inch Lafreniere had 37 goals, 68 assists and 105 points in 61 games for Rimouski, the Quebec League team that sent Sidney Crosby to No. 1 in 2005. Lafreniere, who played on Canada's World Junior team as a 17-year-old, added nine goals and 23 points in 13 playoff games.

Frolunda, the Swedish team that produced Rasmus Dahlin, may have another top-5 pick in 2020 in right winger Lucas Raymond. Prince Albert defenseman Kaiden Guhle, the younger brother of former Sabres defenseman Brendan Guhle, is expected to be a first-round pick as well.

• Loved Vancouver native Sam Reinhart being at the draft to greet first-round pick Dylan Cozens in person. Botterill said Reinhart, now 23, reached out to him a few days before about being part of draft week. Reinhart went to dinner with Botterill, new coach Ralph Krueger, owners Terry and Kim Pegula and others from team management on Wednesday. In NHL terms, Reinhart is now a veteran. Those kind of actions are a nice step forward for him in his role as a core piece of this club.

"The best selling point I’ve always talked about is our players," Botterill said. "I think players in the National Hockey League see the young talent that we have – Jack (Eichel), Sam, Rasmus (Dahlin) – and I think hopefully by stepping up and signing Jeff Skinner it shows we’re going to reward players who want to be a part of things here in Buffalo. So I think that mix is hopefully attractive to other players out there."

• Speaking of O'Reilly, here was Botterill's reaction to the Blues' Stanley Cup: "It was a great run for Ryan and a great story for the National Hockey League what St. Louis accomplished. The resilience they showed, where they were able to get into the playoffs and then what you saw in the playoffs, was something. You look at the road and it was not an easy road. You could have been talking about a first-round loss to Winnipeg and they battled through that. And I thought it was an outstanding final series. Both teams were mentally strong."

• If Botterill isn't buying out Vladimir Sobotka, he's simply not going to buy out anyone. Sobotka is a useless player on the books for $3.5 million next season and Botterill gave a flat-out no when asked if a buyout was on the table.

Botterill's philosophy is clearly to just grit through bad contracts until they're off the books rather than stretch them out as they would be through a buyout. And he also has to balance the dead money the team is now paying to Cody Hodgson the next four seasons, a not insignificant sum of $791,667 per year through 2023 due to the 2015 buyout of his six-year deal signed two years earlier.

• One of Vegas' three fifth-round selections was North Bay forward Mason Primeau. He's the son of Wayne Primeau, who was drafted 17th overall by the Sabres in 1994 and played 225 games for Buffalo from 1995-2000.

Dylan Cozens was right choice at the perfect time for Sabres