He said his relationships with officers, forged at PAL events, helped him decide later on to become a police officer.

The connection between youths and police is what sets PAL apart from other youth sports organizations.

"We have officers at all our events," Nekia Kemp, Buffalo PAL executive director, said Sunday at the PAL in the Park event in Delaware Park. "We have a wonderful partnership with the Neighborhood Engagement Team at the Buffalo Police Department."

But there was no hostility involved.

Jalen, who started boxing when he was 8 but gave it up for awhile, said he's thinking of reconnecting with the sport. Urbanski, who's been training in kickboxing for the past three or four years, was catching the punches Sunday with pads on his hands. He said Jalen packs a wallop.

"He's got to work on a couple things, but for the most part, he's pretty good," Urbanski said. "He's the next Mike Tyson."

"I'd rather learn to play basketball," Jalen said.

Jalen said he finds it more comfortable to talk to police now that he's involved in PAL, but he didn't think he'd consider a career in law enforcement.

But Jalen said boxing's benefits include "learning how to protect yourself. Get some coordination in case anything happens."

"It's fun," said Mya Lawson, 11, who was throwing punches at her aunt, boxing coach Sheana Rudolph.

"I feel like everybody's getting into it," Rudolph said. "It's a good workout, good cardio." 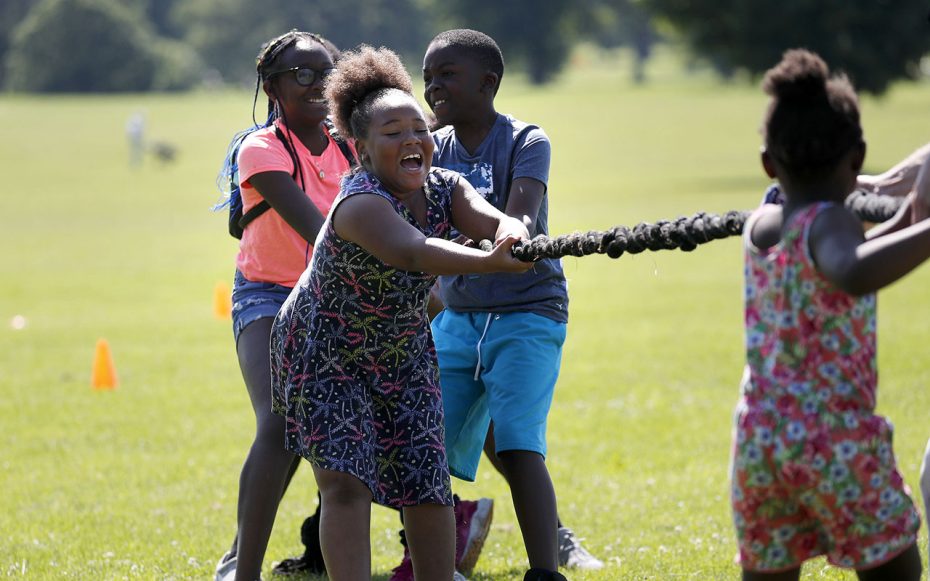 Tylen Wells, 8, pulls a rope with other children in a tug of war game during a Police Athletic League event in Delaware Park. (Mark Mulville/Buffalo News)

Amy Bueme, owner of the local Catalyst Fitness chain, was also in the park offering kids chances to work out.

"We have tire flipping here so they can utilize their lower body, how to use their core, flip a tire properly," Bueme said.

"We were super excited to see the PAL had some other activities," Mirza said. "It's not something we would have tried otherwise."

Idris said he wants to swing a club so he can hit the ball farther.

"Putting is a little harder," he said. "You use a mallet."

The purpose of the Sunday morning get-together along the Ring Road was to show off PAL's long list of offerings to parents and kids.

Kemp said PAL serves about 1,700 kids ages 5 to 18. Registration is available at buffalopal.com.

PAL's best-known organizations are its baseball and basketball leagues, but it offers many other sports and some academic programs, too, including a partnership with Mayor Byron W. Brown's Summer Reading Challenge.