Before any new playground, sledding hill or trails transform Buffalo's LaSalle Park over the next decade, some other key work will come first.

Buffalo Niagara Waterkeeper expects to complete a hydrologic assessment in and around LaSalle Park this year and that work will help shape all shoreline improvements, including adding natural habitat where none exists now.

Also, the seawall – which the U.S. Army Corps of Engineers said is slowly sliding into the Niagara River – will be repaired with a $3.7 million fully funded federal emergency outlay.

The seawall and hydrologic work will come before the transformation of the 90-acre park.

The "conceptual design" the foundation unveiled last month showed some big improvements: a lagoon providing access to the water's edge, a creatively designed playground, ecological habitats and a new pedestrian bridge to replace the overpass that crosses the I-190, connecting the middle of the park to the Lower West Side.

“It is the front door to the city of Buffalo,” said J.J. Tighe, director of the foundation's parks and trails initiative.

And the first work soon to get underway will play a key role in determining what the park's shoreline will look like.

Buffalo Niagara Waterkeeper has a mission this year: Study the Niagara River’s hydrology in and around the entrance to the Black Rock Canal near LaSalle Park.

The data it hopes to gather by year’s end will help inform the design of a revitalized park.

The research will include obtaining historical data about water depths, substrate composition, water flow, wind direction and other shoreline information.

The foundation's early conceptual designs suggest at least a pair of softened shoreline build-outs that promote waterfront access and ecological enhancements beyond the scope of the Corps of Engineers work.

The first, just south from the end of where the Corps of Engineers concrete wall would be built, is marked as an “outcrop.”

An upland build-out there, just inside the entrance to the Black Rock Canal, could include a kayak launch, viewing terrace, fishing perch, picnic area and even waterfront steps.

Farther south, closer to the Erie Basin Marina, sketches include a “lagoon” area where a small shoreline habitat could be built with natural wetland plants and other traditional shoreline features as a way to chip away at the concrete and steel that now hardens the shoreline. Concepts also include fishing areas, water access and natural trails. 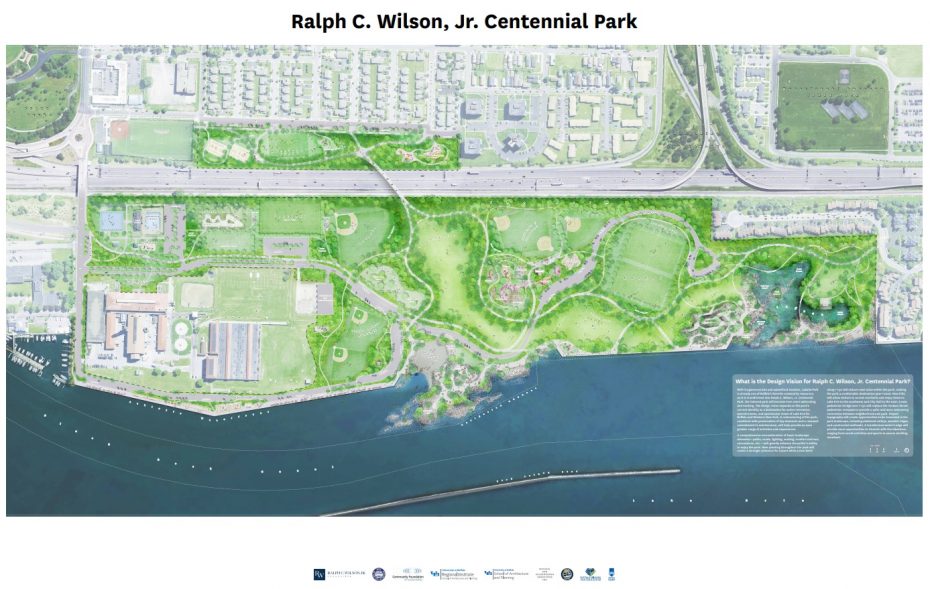 The design vision plan of Imagine LaSalle includes some shoreline enhancements, including an upland build-out into the Black Rock Canal and a sculpted inland lagoon. (University at Buffalo, Regional Institute)

Waterkeeper plans to leverage $1.5 million in funding from the Buffalo Billion that it has dedicated for LaSalle with funding from the Wilson Foundation. Jedlicka said Waterkeeper is also actively seeking additional funds for access and habitat enhancements at the park.

Earlier this year, Waterkeeper sought proposals from consultants to help it determine whether it's feasible to install a breakwall, paddle-sport launch and shoreline habitat features.

"The long-term vision for this project is to implement a vibrant public access point from LaSalle Park to the Niagara River and Black Rock Canal while incorporating critical in-water and riparian habitat and the safety of park visitors and protection of nearby private property," the project summary stated.

Jedlicka said restoring any part of natural shoreline near LaSalle Park would be a positive step because right now there isn't any.

Robert Shibley, dean of the University at Buffalo's School of Architecture and Planning, called enhancing the natural shoreline one of the biggest improvements planned for LaSalle.

The park's southern end could include pollinator gardens, wildflower areas and a more natural landscape than what's presently there.

"It never had much function for that," Shibley said of the existing park. "Anything is already an addition."

In all, 1,355 feet of the seawall in front of the Col. Francis G. Ward Pumping Station at LaSalle Park must be repaired.

Corps of Engineers officials said century-old timber cribs hold the land back from the Niagara River below the water’s surface. But they're failing. If the wall were to fail outright, or fall further into disrepair, it could imperil LaSalle Park restoration work.

The Corps has sent divers under the wall to examine it.

“A lot of stuff has been just torn away from the ice and the wave action,” said Gabriel Schmidbauer, project manager for the Corps of Engineers. “There are missing teeth down there, missing bones.”

“Having it last over 100 years is pretty impressive,” Schmidbauer said.

Plans for the repair work were done years ago, but funding constraints delayed the project.

Now, emergency supplemental funding has been secured, ensuring the project will be 100 percent federally funded.

Plans call for the Corps of Engineers to shore up 800 feet of the wall to the south from roughly the foot of Porter Avenue. From there, a 555-foot stretch of new concrete wall would be installed. The refurbished wall would be expected to last 50 years.

From the shoreline, and even the water, not much of the structural work will be visible. It’s underwater.

What will be seen are new railings in LaSalle Park above the seawall and a new concrete pedestrian path.

“If you look down, it’s going to look a little more modern,” Schmidbauer said.

Schmidbauer said the Corps of Engineers hopes to have a contractor working by fall with a completion date expected by fall 2020.

The foundation’s plan to upgrade the park prompted its “Imagine LaSalle” effort, a community-driven collaboration of residents, academics, urban planners and designers who are crafting a plan for the park’s restoration.

The seawall rehabilitation is separate from the overall LaSalle Park reconstruction, but Schmidbauer said the Corps of Engineers has participated in Imagine LaSalle planning meetings to compare notes and share data. It puts both projects “on the same page,” he said.

“That, to me, is the most exciting part of this project,” Schmidbauer said. “They know what we’re doing. They can overlay our data on top of their data.”