Sometimes, it doesn’t seem so long ago that Peg Barrett and Joan Conti graduated together from the University at Buffalo and went to work as school social workers. Then they tick off the changes they’ve seen during more than three decades on the job.

The rise of social media, the divorce rate, poverty. The opioid crisis. The ability of people, including students, to openly express their sexuality. The desire for students of all abilities to participate, when possible, in typical classrooms — coupled with the growing pressure that peers, parents and society place on young people to excel academically, athletically and financially.

Despite the more challenging dynamic, the passion for their work remains.

“We knew we loved kids, and knew we wanted to work with kids, and that was really the most important thing,” said Barrett, now retired but still president of the New York State Social Workers’ Association.

The South Buffalo native and Conti, who grew up in the central New York city of Rome, were hired even before they left the UB School of Social Work with master’s degrees in 1987 — a time when school districts and the state had yet to determine what social workers should even do in elementary and high schools.

“Some people thought I was going to hand out food stamps and take kids from their homes right to Child Protective Services,” said Conti, named state school social worker of the year in 2018.

Barrett went to work in Depew and Lancaster and spent almost all of her career in Lancaster; Conti worked a year in Alden and Cheektowaga before the latter district hired her full time. She remains one of six social workers in the district.

Both women have run Banana Splits groups for kids of divorced parents. They’ve served on hundreds of Committees on Special Education, advocating for students with special needs. Both have counseled kids, parents, teachers and others impacted by terminal cancer, fatal crashes, suicides and other tragedies.

Q: What is the difference between a school guidance counselor, psychologist and social worker?

Barrett: We are the licensed and certified mental health clinicians in the school. We collaborate with counselors and psychologists. There is plenty of work to go around.

Conti: Another difference is that we have the community connection. We do the home visits and link the families to support services outside of the school when needed.

Q: How do the numbers compare with guidance counselors and school psychologists? 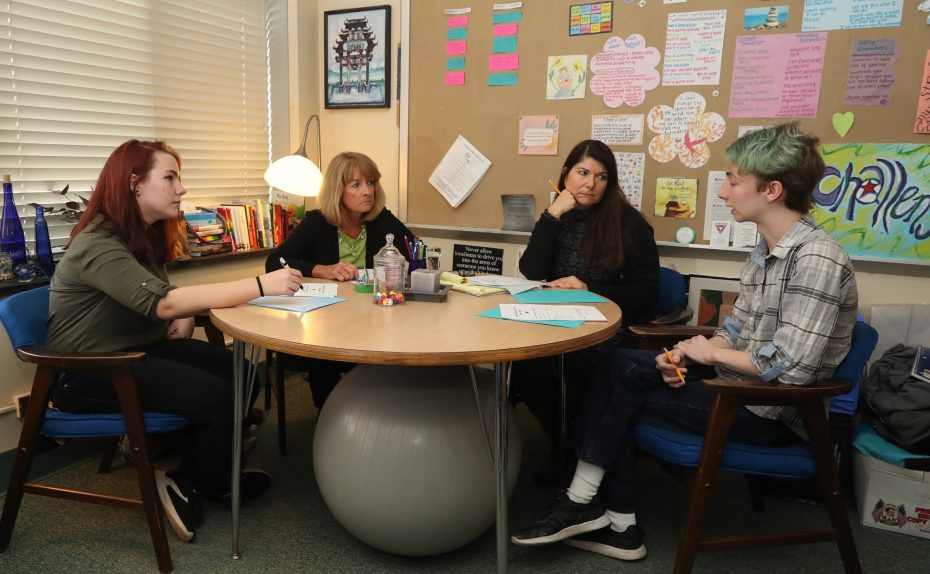 Q: How have things changed in districts, and for families, when it comes to children with special needs?

Barrett: A special needs child who was entitled services under the Committee on Special Education was very well defined in our early careers. It was a child with a defined physical disability who may have needed some services, maybe a special classroom or resource room support. It has changed so greatly because we have children who are diagnosed with depression, anxiety, ADD, ADHD, autism, who are suicidal. The districts have brought back those special needs students who can be accommodated in their own buildings, because it makes perfect sense.

Barrett: The recognition, the understanding has increased.

Conti: What’s happened to my district is poverty. I’ve never had so many fathers in jail. We get a lot of grandparents and single moms asking for support, and there’s been a huge increase in extended families raising children.

Barrett: This issue often may revolve around the child exhibiting signs and symptoms in the school, which is their world. Of course, that’s where you’re going to recognize a child having some social, emotional, physical and behavioral issues.

They’re here all day. They come off the bus crying. They’ve been bullied. They’ve been teased. You know there was a fight at home last night that involved the police. We have to move again, so Mom doesn’t have any money for Christmas. Somebody coming to turn off the gas and electric. There’s been a shooting; a cousin was killed over the weekend.

Q: It can’t be easy to be a teacher in this climate.

Barrett: The standards of have increased at the state level, and the accountability for teachers has become such an issue. They are just overwhelmed by so many tasks. Not only do you teach the curriculum, but now you’re going to be managing the mental health of these kids in your classroom. You’re going to teach mental health and then what happens? It is going to be an explosion of kids self-divulging if they’re sad, or they’re depressed or they’re anxious. And for teacher, what do you do?

Conti: That’s where we come in, we help them with mental health first aid. All our teachers are better trained so they’ll have an idea about what’s going on. We also have taken students, social workers from the University of Buffalo, for 20 years. They’re creative, they’re inspiring, they have fresh ideas.

Q: How does a school social worker figure out which students need almost familylike support versus the students whose parents might say, hey, look, we’ve got this at home; our kids are honor students and doing very well at school?

Conti: It’s so interesting that you’re asking that because trauma doesn’t discriminate. I work with some of the top kids in the senior class who are brilliant, and we have a support group that focuses on empowerment and having a voice because of the stress and anxiety those kids can feel. There are football players that you see. There’s so much pressure and distress.

Q: What are the keys to success as a social worker?

Conti: If you have a relationship with the kids and you’re going to be accessible and non-judgmental, and caring and loving, everybody will come in who needs to talk. It could be a one-shot deal, or it could be somebody worried about somebody else.

Barrett: Our teachers have become very, very good at recognizing changes in children and they’ll come to us because now we have the visibility in the buildings and the availability to support the teachers. We also have parents calling every day. If we can provide all of these people with some tools to empower them to look logically and realistically at what’s happening, they can come up with their own plan and we’ll support the plan.

Conti: At the end of the day, they’re the ones who are going to build the shed with the tools, not us. I always say like no matter how broken or what the problem is, you have the courage to heal.