The new law firm that initially called itself Cellino & Cellino has changed its name to the Law Offices of Anna Marie Cellino, LLP.

The name change, announced Friday afternoon, comes 15 days after partner Steve Barnes of the Cellino & Barnes law firm filed a federal lawsuit accusing his longtime business partner, Ross M. Cellino Jr., of secretly starting the firm as part of an effort to dissolve his old one.

“We’re changing the name to avoid protracted litigation,” Annemarie Cellino, one of Ross Cellino's daughters and a partner in the new firm, told The Buffalo News Friday afternoon.

Annemarie Cellino is a partner with her mother, Anna Marie Cellino, and Jeanna Cellino, who is Annemarie’s sister. The three women deny that Ross Cellino has any role in the firm.

The three women announced in April they formed a personal-injury plaintiffs law practice called Cellino & Cellino LLP. But Barnes sued them a few days after they opened their office, claiming the name infringed on the law firm he shares with Ross M. Cellino Jr.

Anna Marie Cellino said, “I have no interest in litigating this frivolous issue with Mr. Barnes. The firm that I formed with my daughters exists to serve our clients. We do not wish to waste time on petty squabbles, nor do we wish to unnecessarily consume judicial resources.”

An attorney representing Barnes said the name change is a win for Cellino & Barnes. 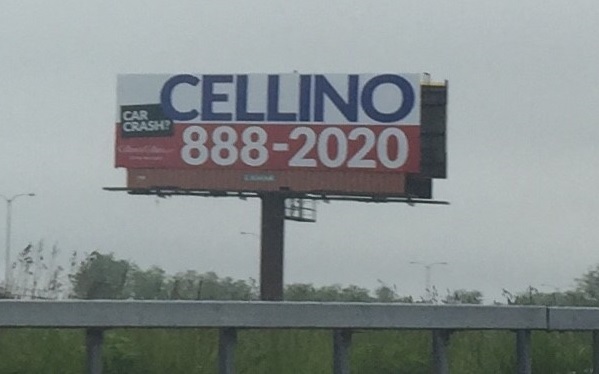 This billboard for Cellino & Cellino greets commuters heading into the city on the northbound Skyway. (Keith McShea/Buffalo News)

The new firm — which is located in the same downtown office building as Cellino & Barnes — is the latest bone of contention in the long-running dispute between Steve Barnes and Ross Cellino Jr., two of Western New York’s wealthiest attorneys.

The two men spent more than two decades building one of the nation’s most financially successful injury law firms before May 2017, when Cellino filed a lawsuit to dissolve the firm, saying he could no longer stand working with Barnes. Cellino’s request to dissolve the firm is opposed by Barnes and is pending before State Supreme Court Judge Deborah Chimes, who has planned a trial to begin in August.

In a federal court action filed earlier this month, Barnes accused Cellino of infringing on the trademark of Cellino & Barnes with advertisements and billboard signs for the new law firm intended to look very much like those used by Cellino & Barnes.

"We do take the position that Ross Cellino is personally involved," said Christopher M. Berloth, an attorney for Steve Barnes. "It goes to show that the formation of Cellino & Cellino does not pass the sniff test."

The new firm is now competing with Cellino & Barnes for personal injury business.

The Cellino women said they asked U.S. District Court Judge Elizabeth A. Wolford on Friday “to dismiss Barnes’ lawsuit, given the new firm’s voluntary name change and other alterations that make the lawsuit moot. These include voluntarily changing the firm’s phone number and their intent to use billboards showing the two younger Cellino attorneys, so there’s no 'confusion' about who’s whom.”

“It is flattering that Mr. Barnes finds our new firm is competing already, but we recognize that we need to be pragmatic,” said Annemarie Cellino.