While those remain reliable sources of satisfaction, it’s time to revisit some of the Chinese regional flavor Buffalo was more familiar with before the restaurateurs followed the Chinese nationals to the University at Buffalo’s Amherst campus.

Cantonese cooking is subtler and more seafood-based than many other Chinese regional cuisines, relying on texture and freshness to impress more than showers of chiles and spices that numb your tongue on purpose.

At Eastern Pearl, which replaced Chang’s Garden in 2009 after a fire, the kitchen is fluent in Cantonese. 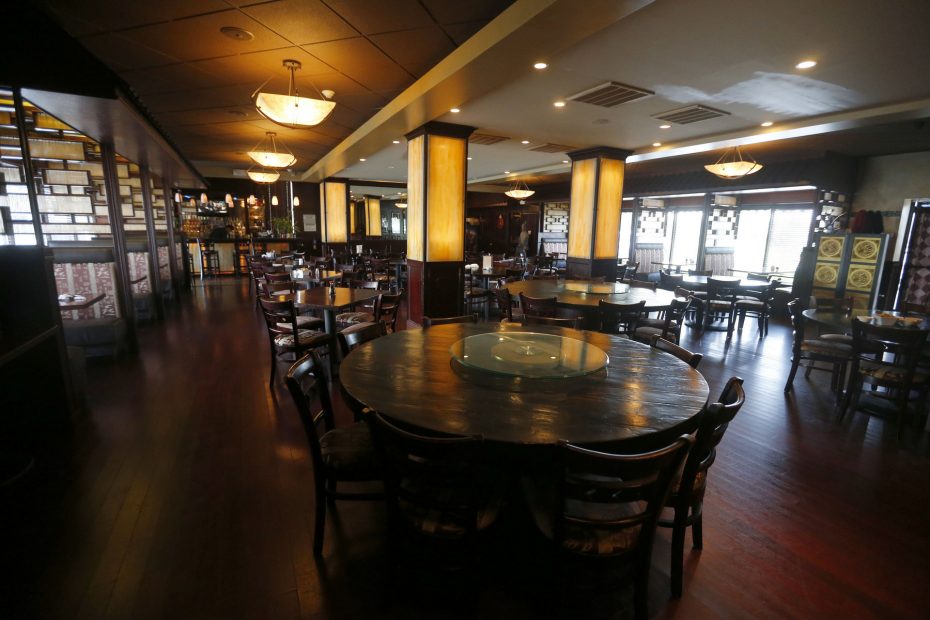 Step through double doors guarded by stone lions, past the host stand and pocket bar, and you’re in a spacious dining room, lined with booths and surveilled by terra-cotta soldiers.

Lazy Susan dish carousels sit in the middle of the bigger round tables. Eastern Pearl does a brisk business in the lunch plate trade, with a broad variety of dishes, choice of rice and soup or spring roll ($6.75-$9.50).

Far better to bring a posse and fill the carousel with dishes to explore between you. So many different flavors textures and sensations come out between $5 and $10 a throw that a few gambles won’t break the bank. 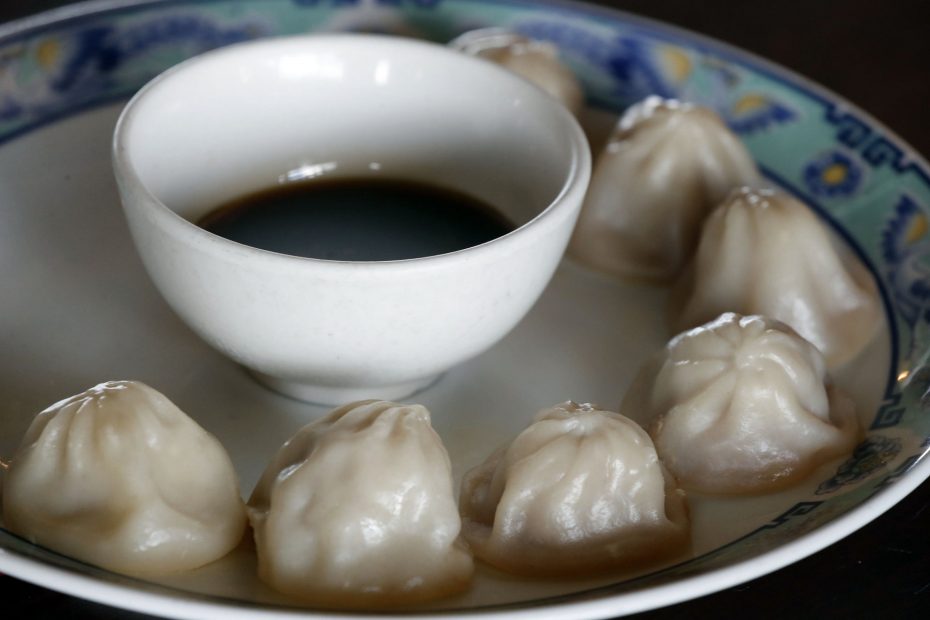 Making simple dishes sing is a sign of a promising kitchen. Salt and pepper string beans ($5.50) were green beans coated with a not-quite-smoldering level of black pepper. They had been wok-tossed, with fresh onion, garlic and sliced jalapeno until slightly smoky and still snappy.

Rocky shrimp ($8) were thumb-sized crustaceans wearing light jackets, puffy but crispy, sparingly glossed with a spicy-sweet mayonnaise and speckled with black sesame seeds. These were compulsively poppable, their nearly greaseless exteriors a sign of delicious fried things to come.

Filed under not particularly exciting: a limp scallion pancake ($4) almost devoid of the eponymous green onions, baby barbecue ribs ($8) that were plenty sticky but demanded a tedious gnaw, and juicy pork buns ($6.50) whose wrappers stuck to the steamer and tore, spilling their rich, prized broth into the bottom of the plate.

Dishes offered pleasant aromas from proper wok-frying, a twinge of smoke that aids the appetite. The Cantonese term for it is “wok hay,” or “breath of the wok.”

It turned up the pleasure on chow mei fun with shrimp ($11), our server’s recommendation from the five types of pasta available for stir-frying with the customer’s choice of protein. Angel hair-gauge rice noodles, tangled with thumb-sized shrimp, scrambled egg, red onion, bean sprouts and bell pepper came out flavorsome but not greasy. 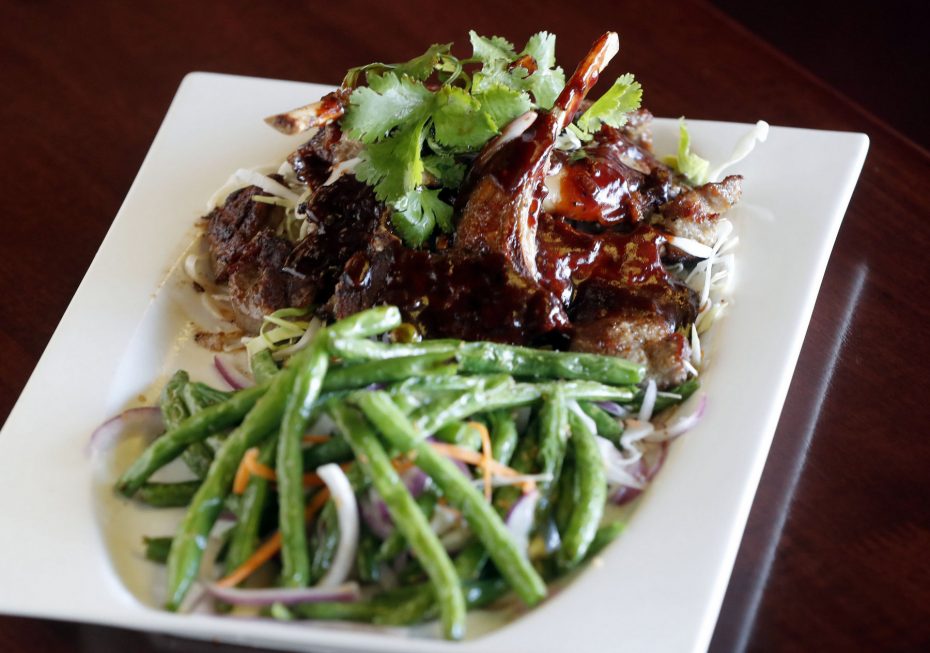 The XO fried rice ($13) was another showstopper for flavor and aroma. XO sauce is a condiment made of ham, dried scallops, dried shrimp and other ingredients, and it brings a subtle seaside funk to the table, echoing scallops secreted in the rice. Flecks of bacon doubled up on the smoky crunch.

I’ve praised some of Eastern Pearl’s little dishes, and we tried some large-format numbers as well, the sort of plates you order for a celebration or a crowd. The most expensive ones go for the price of one entry-level fine dining entrée.

Imperial Flounder Feast ($34) was a fish as long as my forearm. It was prepared two ways, then piled between its head and tail for presentation. One side was delicate filets sautéed with vegetables in a cornstarch sauce, gentle flavors. The other was fish coated in an ethereal crust, fried greaseless, and then given a second ride in the wok with rousing aromatics like jalapeno and garlic. I appreciate subtlety, but next time I would ask for both sides fried, because it was that compelling. 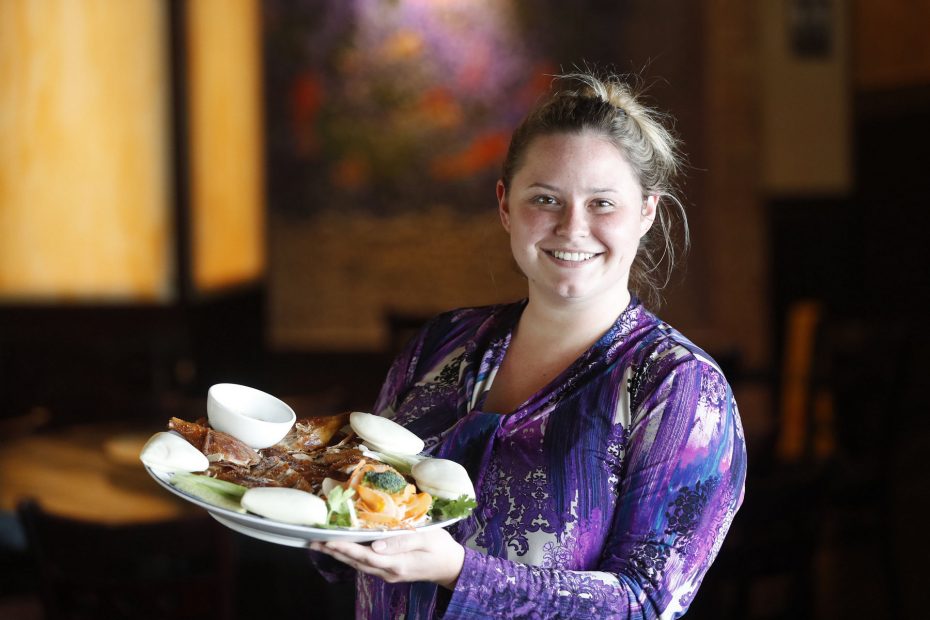 Peking duck ($34) was a whole bird cooked into moist meat covered by a layer of shiny bronze skin. It arrives mostly disassembled for the table, so the only struggle is how to ration the puffy buns. They are meant to be stuffed with shreds of meat, a leaf of skin, slivers of cucumber and scallion, and a smear of hoisin sauce. The skin could have been crispier, but it was still a pleasure to devour.

If you’ve never thought to order lamb chops in a Chinese restaurant, Eastern Pearl’s ($19) should set you straight. A half-dozen rib chops were tossed in seasoned flour and seared to golden brown. Still pink and tender inside, the lamb lollipops were served with more salt-and-pepper green beans. 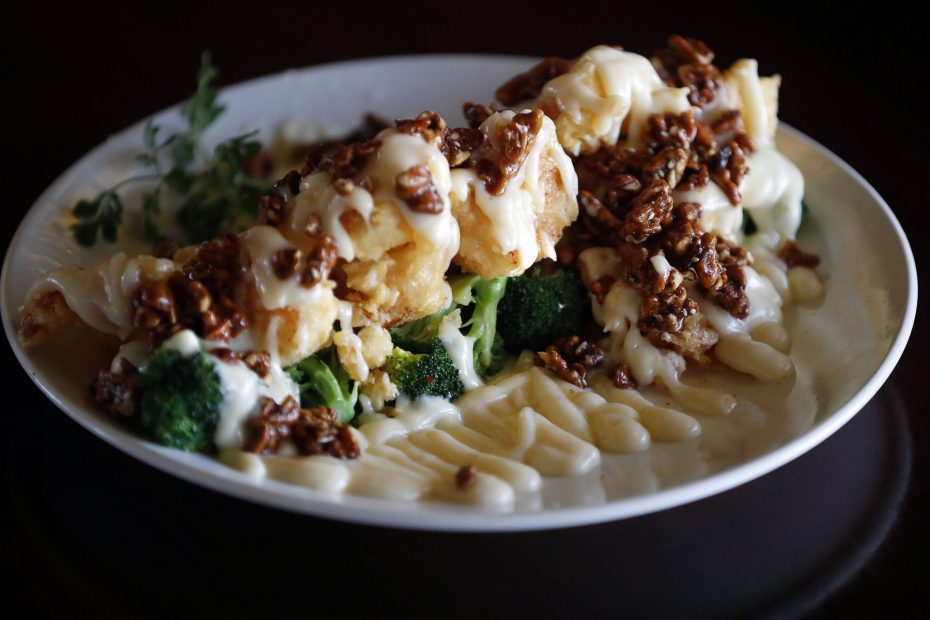 Also worth mentioning: terrific crispy chicken ($14), a whole bird spiced up, fried to a crackling crisp and cleavered into chunks, bone and all.

Though I’ll always be a fan of pyrotechnic sensations and exotic ingredients, if you’re looking for the more familiar and family-pleasing dishes of Cantonese cuisine, there’s no doubt Eastern Pearl is a gem.

Gluten-free options: most dishes can be on request 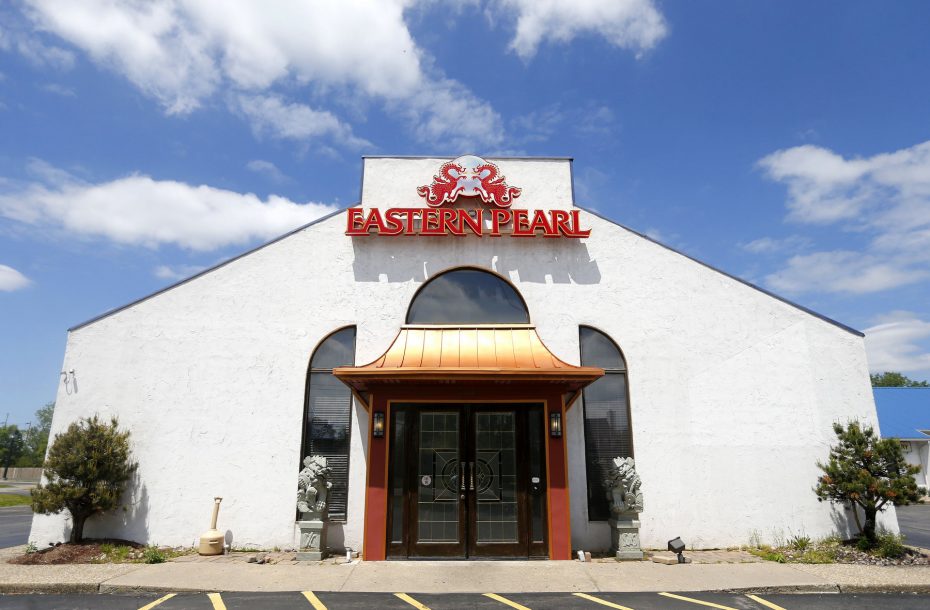