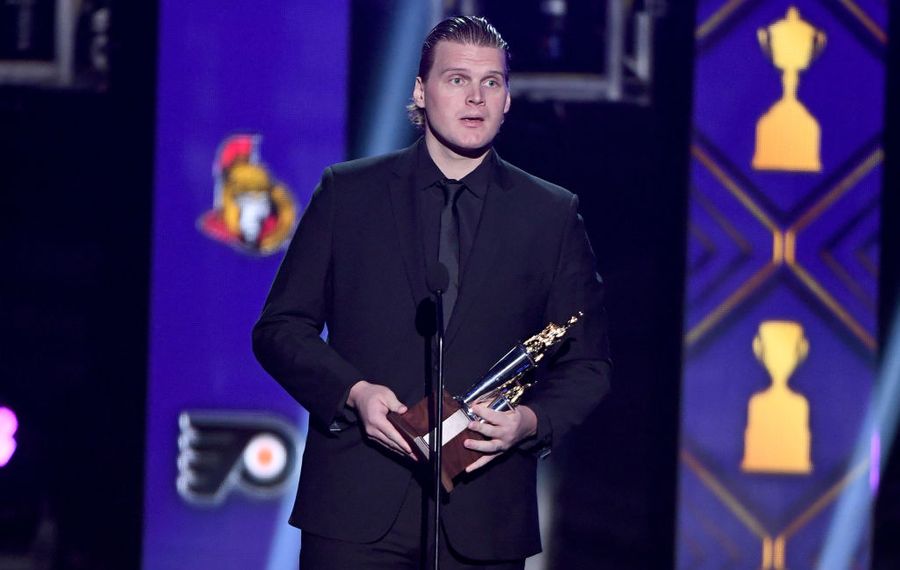 LAS VEGAS – It was just under 15 months ago when Robin Lehner had a panic attack during intermission of a Buffalo Sabres game in KeyBank Center, left the building before the final buzzer and finally admitted to his wife and the team that he needed help.

Forget about the potential end of Lehner's hockey career, which was thrust into limbo when the Sabres walked away from his contract as a restricted free agent after the season. This was about life.

Lehner's story has been widely reported all season. And if you want life lessons, you should have seen him here the last two days in the wrapup to the 2018-19 campaign. Lehner looks fit and trim, spoke proudly and confidently and completely belonged in a room full of the NHL's brightest stars.

After a tremendous first season with the New York Islanders, Lehner reaped his rewards Wednesday night at the NHL Awards show. He shared the Jennings Trophy for allowing the fewest team goals with teammate Thomas Greiss and finished third to Tampa Bay's Andrei Vasilevskiy and Dallas' Ben Bishop in balloting for the Vezina as best goalie.

And in the most wholly appropriate vote, Lehner was a landslide winner of the Bill Masterton Memorial Trophy for perseverance and dedication, as awarded by the Professional Hockey Writers Association. Then he just nailed his acceptance speech, continuing the call for mental health awareness.

Said Lehner in what easily rated as the sound bite of the night: "I'm not ashamed to say I'm mentally ill – but that doesn't mean mentally weak."

Brave words to say in front of several thousand people in the Mandalay Bay Events Center as well as an international television audience.

"It's how I feel now," he said. "A lot of people, the majority of people, are ashamed of their flaws. At the end of the day, everyone deals with something. Different issues, different pockets. There's a lot of people with some type of mental issue who have a lot of success."

Wow. That's powerful stuff. Lehner has completed alcohol rehab and remains on medication to treat bipolar disorder. He revealed his story to the world in a chilling first-person account in September in The Athletic and putting together the season he did was all about perseverance.

Show this @RobinLehner clip to someone who needs it. 💛

"I am not ashamed to say I'm mentally ill. But that does not mean mentally weak." pic.twitter.com/3JTkWXjw3z

Now Lehner has to potentially go through even more roadblocks. He's an unrestricted free agent and it remains to be seen if the Islanders will bring him back on a multi-year deal. Sobriety, of course, is a daily battle and teams have to weigh the risk.

"I've proven for one year that I'm sober," Lehner said here Tuesday. "The reality is maybe that's not that long. There's obviously a risk and reward still and it's business. Me coming out was maybe not the best business decision I made but I'll do it again. I've got to accept what I've done. I'm going to keep speaking on behalf of mental health and addiction. You can't change anything and not expect to have risk involved in it."

Lehner revealed here there's been no talks of substance to date with the Islanders less than a week before the free agent interview period begins.

"We haven't started anything," Lehner said. "It's been a long due diligence phase. I'm a special case. It's just the reality of things. Me coming out with the article, I knew there was a lot of risk to it. I'm fine with that. I have nothing to hide. I'm so confident with my future and sobriety, I have no doubt in the world. We'll see what happens."

"It's incredible to see," said St. Louis center and former Buffalo teammate Ryan O'Reilly. " 'Lenny' is a guy who obviously has gone through so much. To see him get the response that he did, to see him come back and help that team win the way he did by playing so unbelievably, it was so amazing to see. He's been through so much and he definitely earned it. I'm so happy for him and I know a lot of guys who played with him are."

Lehner said being a free agent is an unusual spot for him. If he doesn't re-sign with the Islanders, it's likely he'll get interest from Carolina, the team that eliminated the Isles in the second round of the playoffs. Hurricanes GM Don Waddell said here Tuesday he fears being unable to re-sign goalies Petr Mrazek and Curtis McElhinney.

"You're always nervous. It's not fun going through this, especially a guy like me," Lehner said. "It's just the reality of things. Do I wish we had something done right now? Sure. But it's not. You've got to play the cards you're dealt. I know the team knows where I stand. I hope something works out. I don't care if it's long-term, short-term, whatever. I just want to be part of this team."

And while Lehner looks to secure his hockey future for the long term, he has to simply take life day by day.

"It's been a long journey since I left Buffalo, went to rehab and started taking steps to change my life," he said. "The perseverance is not giving up, trusting the process, trusting all the things I need to do and the support system I have from my wife to everyone else around me."