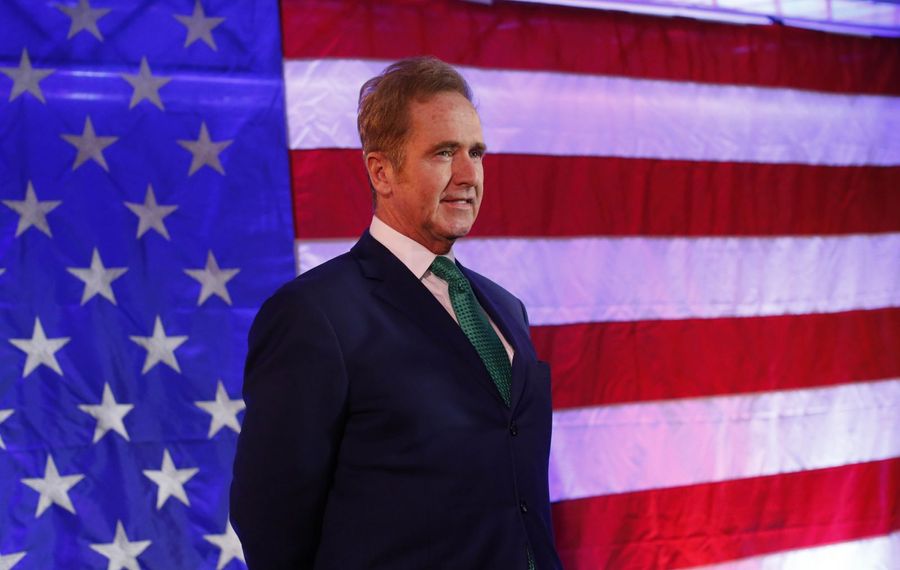 WASHINGTON – Rep. Brian Higgins Tuesday called on the House of Representatives to begin the process that could lead to the impeachment of President Trump, saying an impeachment inquiry is the best and quickest way to finish the investigation started by special prosecutor Robert Mueller.

In an interview with The Buffalo News in which he was sharply critical of both Trump and Mueller, Higgins, a Buffalo Democrat, reversed course on the need for an impeachment inquiry. Higgins said he did so after reading and studying Mueller's report, and after seeing the Trump administration stonewall the House's attempts to investigate the president's actions.

"This presidency, the Trump presidency ... is the most corrupt in American history," Higgins said, quoting from notes he wrote to himself while reviewing the impeachment issue.

"All the president's men are not in jail, but a lot of them are," he added, citing the cases of Trump's former national security adviser, campaign manager and personal lawyer.

In late April, after the release of the Mueller report, Higgins suggested that the House should investigate those 10 possible instances of obstruction before beginning impeachment proceedings.

"The impulse may be to just move on impeachment right away, but I think we have to explore those 10 areas that the Mueller report left open-ended relative to whether or not the president committed obstruction of justice," Higgins said at the time.

Higgins said he reversed course on an impeachment inquiry after witnessing what he sees as an 11th possible obstruction of justice: Trump's refusal to provide information and produce witnesses in response to subpoenas issued by House committees investigating the administration.

"An impeachment inquiry strengthens Congress's hand in seeking information and witnesses to fully carry out its responsibility" of overseeing the administration's actions, Higgins said.

Higgins stressed that he's not saying at this point that Trump ought to be impeached.

"You don't know where (the investigation) is going to lead," he said.

Still, he said an impeachment inquiry is needed to allow the House to dig deeper than Mueller did.

"Obstruction of justice is a federal crime," and the Mueller report indicated again and again that Trump attempted to do just that, Higgins said.

In many cases, Higgins noted, the only thing that might have prevented Trump from obstructing justice was his own aides' refusal to carry out his orders to interfere with Mueller's investigation.

The House Judiciary Committee is reviewing Mueller's findings. Meanwhile, the House Intelligence Committee continues to review Russia's attempts to aid Trump in his 2016 presidential campaign against Democrat Hillary Clinton, and the House Oversight Committee is looking into several issues – including the possibility that Trump inflated his net worth in his 2014 bid to buy the Buffalo Bills.

But Trump's lawyers have been able to slow such investigations by refusing to comply with the subpoenas House committees have issued. Trump's has done so by arguing that the House has "no legitimate legislative purpose" in seeking information and testimony about the administration's actions.

Higgins said that argument is key to his decision that the House must begin an impeachment inquiry. Beginning such a probe would automatically give House investigators that "legitimate legislative purpose," thereby freeing up evidence and witnesses much more quickly than fighting for it in the courts, Higgins said.

Mueller left it up to Congress to decide if Trump tried to obstruct justice, and he did it in a way that deeply disappointed Higgins.

The special prosecutor said firing FBI director James Comey might have amounted to obstructing justice. So, too, might have Trump's earlier attempt to get Comey to drop the investigation of former National Security Adviser Michael Flynn's Russian contacts. So, too, might have Trump's attempts to remove Mueller and otherwise influence the special counsel investigation and the separate probe of Michael Cohen, Trump's personal lawyer.

Even so, Mueller refused to take any action against Trump, citing a 1973 Justice Department opinion that presidents cannot be indicted.

At the same time, Mueller said elsewhere in his report that no president is "above the law."

Higgins' change of heart on an impeachment inquiry puts him at odds with House Speaker Nancy Pelosi of California, who has resisted calls for Trump's impeachment.

Pelosi has privately argued that a House impeachment investigation would end with Trump being acquitted in the Republican Senate, thereby leaving the president with a political victory – and possibly endangering Democratic control of the House in 2020.

Higgins said he had informed Pelosi's office of his decision but had not received any pushback. A year after he called for Pelosi's removal – a position he later reversed – Higgins praised the speaker's performance.

But he disagreed with her sense that impeachment would prove to be a distraction from the Democrats' legislative agenda in the House.

Higgins said he didn't consult with members of the Judiciary Committee before he decided to reverse course on an impeachment inquiry. And he said his change of heart is not a response to public opinion, which he described as deeply divided.

Instead, working largely on his own, Higgins said he reached a clear conclusion: "Congress has to finish what Mueller didn't finish."