For Matt Renkas, the larger name for his proposal was never a question. One or two walks along an overgrown railroad bed in Buffalo taught him how that elevated strip was long perceived by residents of the Old First Ward, the Valley neighborhood and the Perry housing complex, an understanding reinforced by the way neighbors describe it.

Even now, many refer to it as "The Del," taken from the old DL&W, or Delaware, Lackawanna and Western railroad.

That neighborhood shorthand is how Renkas titled his vision for a 1.5-mile walking, running and biking trail from Canalside to RiverBend, an entry announced last week by the Western New York Land Conservancy as the winner of a community choice award, selected by a popular vote from almost 100 submissions.

“It’s what it was called then and it’s what it is now,” Renkas, a city firefighter, said of "The Del." Many residents knew the railroad in that way when it was an artery between the factories and plants that shaped the neighborhood, a time when Buffalo grew into a nationally prominent engine of heavy industry.

Generations of children held onto the nickname even as many plants padlocked their gates and the trains began to vanish. The embankment shifted into a place of childhood escape for youths whose entire worlds often revolved around the blocks nearest their homes.

Calling it "The Del," Renkas said, "came organically from the Buffalo beneath it." To him, it becomes a symbol of how any true civic renaissance intertwines thoughtful forward motion with respect for the nature of distinct neighborhoods, whether that involves the Fruit Belt or Riverside or the West Side.

In this case, he thought of the story of the land as far back as the Haudenosaunee, who knew it as woods and fields long before the rise and fall of the railroad – and long before deer and other wildlife were chased off, then quietly returned as the city changed.

Renkas, 33, brings together many elements of a city in transition. He was raised in Alden, the son of a captain in the city fire department. His parents have deep South Buffalo roots, and he grew up viewing their old neighborhood as a place of familiar landmarks he loved to visit, offering a richer understanding of his own family.

After high school, he attended the SUNY College of Science and Environmental Forestry in Syracuse, an opportunity to study landscape architecture and get a taste of planning. Renkas began to better appreciate the complicated forces that can lift or wound communities, particularly city neighborhoods.

From Syracuse, he moved into a sequence of different jobs – such as working for a time for Cleveland metro parks, and traveling throughout the Northeast to fix medical equipment – that gave him a keener sense “of how other cities are built and what’s happening there.” 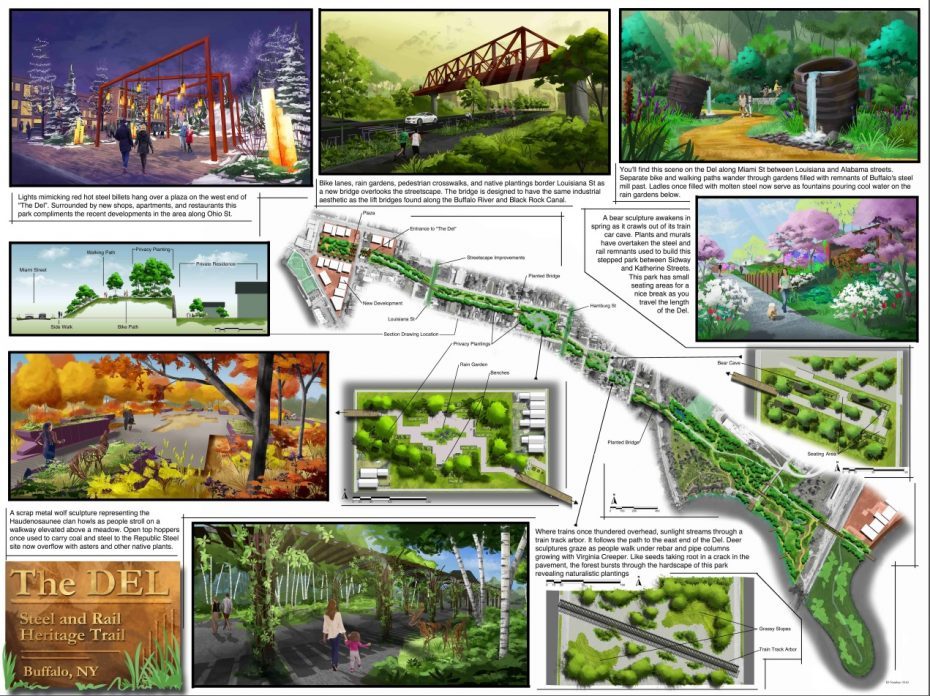 All those steps, he sees now, served a purpose. Four years ago, he began working as a firefighter out of Ladder 15 at Clinton Street and Bailey Avenue. "I love it," Renkas said of a job that fully reintroduced him to a city where he realized he felt at home.

Renkas moved into South Buffalo, the neighborhood where his family established itself years ago, and became conscious of a kind of grassroots energy he does not remember from his youth.

When he read that the conservancy was holding a public design competition for what essentially will be a linear park along the railroad bed – a concept many have likened in certain ways to the High Line in Manhattan – Renkas decided to give it a shot. He attended community meetings and walked the trail many times, from a point near the new Tesla works on South Park Avenue to the place where the trail would begin, near Canalside.

To Renkas, the High Line comparison works when considered in a different context. That elevated railroad line, in a place of intense density in the nation's largest city, provides a refuge and escape from the tumult around it.

With the old DL&W, a successful plan would need enough energy and beauty to both attract newcomers and please those who already know it well. In his plan, Renkas tried to plug into the wonder that 10-year-olds have felt for years upon finding metal relics of lost factories beneath a sweeping quilt of vines and wildflowers.

“I know that sense of discovery,” Renkas said. “Nature was here and then for years it became industrial, and then nature came back and the one constant was the people who stayed here through it.”

In their resilience, he finds his framework for The Del.

Renkas started working on his design in December, doing much of it at the kitchen table of his South Buffalo apartment. The conservancy estimates that the final project, however long it takes, would cost around $20 million. 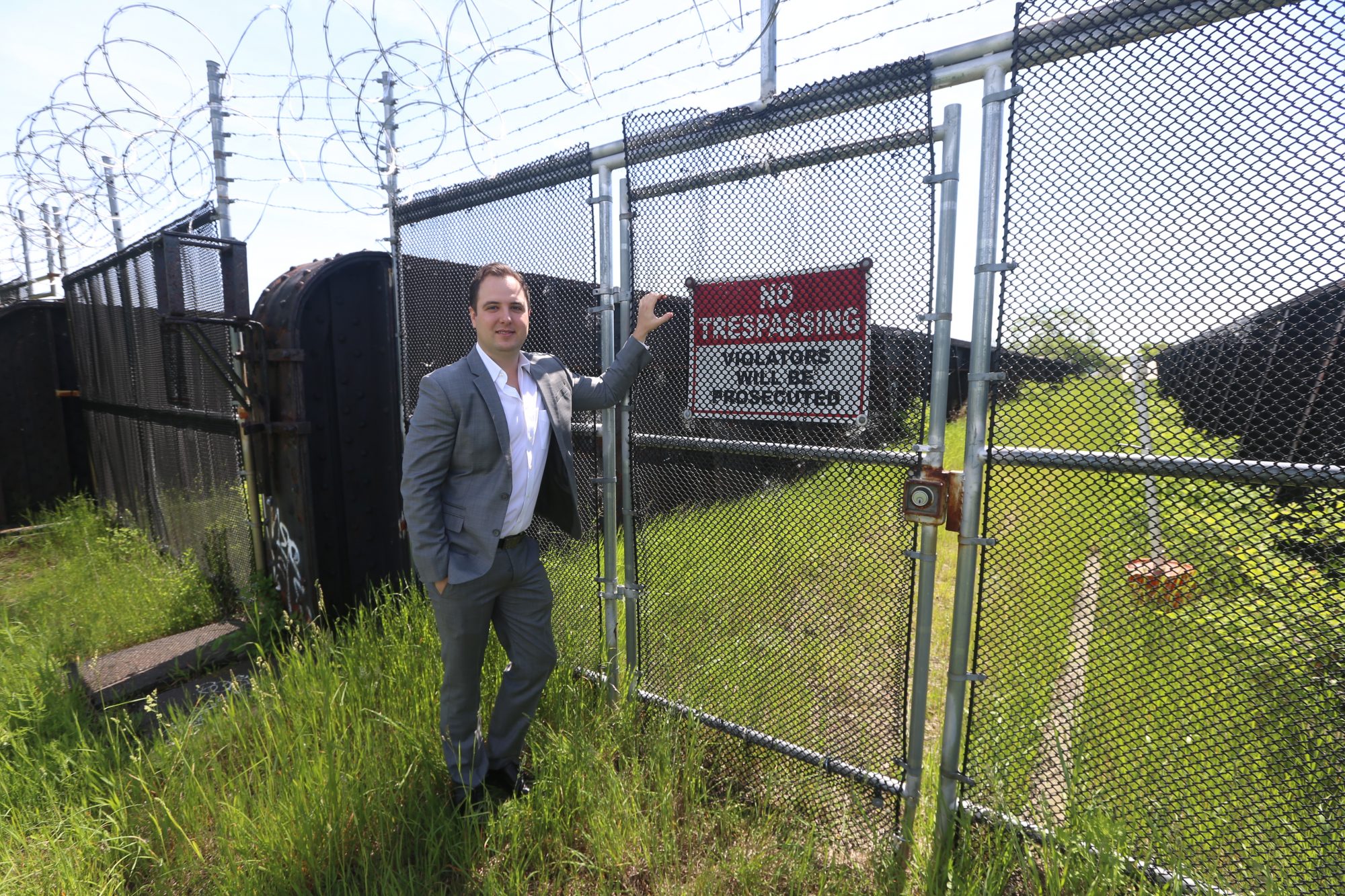 Buffalo firefighter Matt Renkas at an abandoned railroad that would become a striking community highlight of his dream design for the old DL&W railroad bed. (John Hickey/Buffalo News)

So Renkas tried not to think about money, but instead to lay out “ideas that fit the context of the site.” He envisioned a raised platform as a riverside overlook on one old railroad bridge, and pictured a newer bridge – replacing a long-vanished viaduct – in the fashion of wildlife spans used in remote areas where animals need to cross roads safely.

He proposed a spectacular illuminated trestle, reaching back to the railroad heritage. He called for meshing iconic industrial elements with newly landscaped trails, such as converting abandoned rail cars into enormous planters. He sought to identify how on-and-off foot and bicycle traffic could fuel neighborhood shops, restaurants and businesses, including at Hamburg and Louisiana streets.

And he emphasized using plant cover and distance to separate the trail from residential backyards, because proximity has been an element of concern for some neighbors.

"For it to succeed," Renkas said, "the community needs to want it there."

This entry by a lone firefighter was voted as most compelling from almost 100, with Mathews Nielsen Landscape Architects of New York City selected as a separate winner by a seven-member design jury.

Nancy Smith, executive director of the conservancy, said no one design is expected to dominate the next conceptual phase of the plan, which will be shaped with the help of a $369,000 grant from the State Office of Parks, Recreation and Historic Preservation.

The conservancy is working with the Block Club, a Buffalo firm that does market strategy, on a theme and name for the entire vision. Among several initiatives this summer, project representatives will go door-to-door in nearby neighborhoods to collect ideas or concerns, addressing an emphasis Smith and Renkas see as vitally important.

The central idea, Smith said, is using a natural trail as a thread to reinforce a community that has called the area home for a long time.

As for Renkas, he looks at the explosion of trail and parks projects along the Niagara River and dreams of a moment when bicyclists could start pedaling near RiverBend and essentially keep going until they reach Niagara Falls. Such hopes were already on his mind a few months ago, when he wandered on the trail near Red Jacket Park and a woman walking her dog said to him, “Does this go anyplace?”

Sean Kirst is a columnist with The Buffalo News. Email him at skirst@buffalonews.com or read more of his work in this archive.