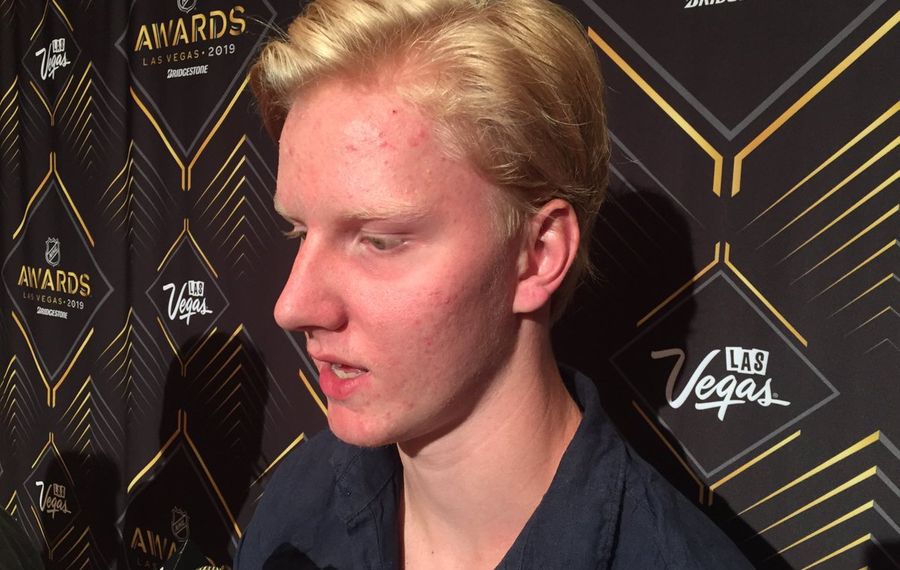 LAS VEGAS – There is no whirlwind spring and summer being a top draft prospect. Rasmus Dahlin is back in the gym – and back on the ice – taking the lessons he learned from his rookie season with the Buffalo Sabres to make some strides as a sophomore.

And he's anxious to see how it's going to go under new coach Ralph Krueger.

"I didn't even really know who he was but I did some research on him," Dahlin said here Tuesday in Encore at the Wynn during a media session previewing Wednesday night's NHL Awards Show. "He seems like a really good coach."

Krueger texted Dahlin to initiate their first conversation on the phone and Dahlin said his new coach's background from the Olympics, World Cup and Premier League soccer has him intrigued.

"Of course you're a little bit nervous but I was excited to talk to him and listen to what he was saying," Dahlin said. "He seems like an awesome guy. He's so experienced being in the soccer, too. That's a lot of different teams he's been around. He likes developing hockey players.

"He likes to play with the puck. We have players on our team who like that, too. I will try to play the best hockey I can and then we'll see."

Dahlin is one of three finalists for the Calder Trophy as rookie of the year. He's nominated along with fellow Swede and heavy favorite Elias Pettersson of Vancouver, and St. Louis goalie Jordan Binnington.

Binnington, who led the Blues to the Stanley Cup last week, would likely win the award in a walk if playoff performance is factored in. Because the awards just count regular season, Pettersson is the favorite after collecting 28 goals and 66 points this season.

Dahlin had nine goals and 35 assists this season, becoming the first 18-year-old defenseman in NHL history to play all 82 games in a season and finishing second to deposed coach Phil Housley is scoring among blue-liners at that age.

"I don't expect to win but you never know," Dahlin said of becoming Buffalo's first Calder winner since Tyler Myers in 2010. "It's really fun to be here. It's fun to be nominated. I think I had a pretty good season. It's special to have two players from Sweden here. [Pettersson] is a really good guy and a good player. To be able to be in Vegas with him at the Awards is special."

Dahlin admitted one big takeaway from his rookie season was dealing with the mental and physical fatigue of the long NHL grind.

"I didn't expect the season would feel that long," he said. "It was 82 long games. I'm more mature about it now. I think I know how to handle all these games. My conditioning is the key to my success.

"You have to take care of your body. And some days I got too frustrated when I had a bad game. Being able to not always think about the games will be a key next year."

Dahlin knows what draft prospects are going through this week waiting for Friday night's first round in Vancouver. And he's like all the Sabres, watching and waiting to see what General Manager Jason Botterill does to retool the roster after Buffalo's eighth straight year out of the playoffs.

"I'm super curious. We'll see if we get any new players," Dahlin said. "We have to wait and see. The trade deadline last season was pretty special. I had never experienced that before. It was weird. New things every day."

Dahlin said he and his teammates were thrilled Botterill sealed the deal with winger Jeff Skinner on an eight-year, $72-million contract.

"It's really good that he's back," Dahlin said. "He's a really great guy in the locker room and he scores a lot of goals. That's so good for us."

Dahlin made several references to the Sabres' 10-game winning streak last November as a sign they can quickly retool in the tough Atlantic Division and make a run to a playoff spot. The rollercoaster 76-point season was not what he expected once the Sabres burst from the gate first overall in the NHL standing after 25 games.

"It was pretty tough. We started off really good and then we started losing," he said. "People were too frustrated at times to keep going and we weren't able to play our best hockey. It was very tough, a new thing for me. I had to learn a lot from last year."

The Sabres will learn their 2019-20 schedule next week and it will include a November trip back to Sweden for two games against Tampa Bay in Stockholm.

"I've got time to prepare for next season, come back and really fight for a playoff spot," Dahlin said. "I'm young and a defenseman. There were a lot of things to improve on last season. To have a lot of time to work on a lot of things this summer will really help me."